PIAA PCL Girls’ Basketball Round-Up: The two teams had competed for the Catholic League girls’ championship 19 days earlier, and it necessitated an overtime period to decide the winner.

PIAA 5A Quarterfinal, Final seconds of Carroll vs. Wood:

While embracing her adorable niece Keke, Harlem Jennings talks about the value of defense:

Mary deSimone describes "being in a zone" with her shooting touch:

Freshman Grace O'Neill said everyone contributed in the victory:

This clash didn’t require any extra sessions. Sparked by an aggressive team defense and some lights-out shooting from senior Mary deSimone, District 12 champ Carroll defeated District 12, three-seed Wood by a misleadingly close 63-48, the third time this season that the Patriots toppled the Vikings.

Whenever Wood (17-12) seemed to make some strides, deSimone answered with a deflating three-pointer. At halftime, the senior guard had already drilled four treys, helping Carroll to a startling 36-22 lead at halftime.

The third quarter was more of the same, as Carroll (24-5) took advantage of Wood foul trouble to consistently shoot free throws. The Patriots ultimately swished 17 of 25 compared to just eight of nine by Wood.

Although there was a major disparity in fouls, Carroll’s defense was fabulous. Several of the Patriots specifically lauded senior Harlem Jennings for her considerable harassment of Wood’s oft-productive scorers.

“I was taught that defense wins championships,” said Jennings. “That’s what I have focused on this entire year. It’s a self-awareness thing – knowing what is going on during the game, knowing what you have to do.”

Meanwhile, the Carroll offense increased the lead to 49-30 after three quarters. Behind five three’s, deSimone finished with 16 points. Junior standout Erin Sweeney tallied a game-high 19 and freshman Grace O’Neill deposited 17, including seven of eight from the charity stripe.

“We really had our intensity on defense the whole game,” said Sweeney. “We didn’t have any breakdowns. Whenever they made a shot, I felt like we always had an answer on offense.”

“We were confident coming in,” said O’Neill. “We knew they were a really good team and we needed to play to the best of our abilities. We all contributed together. It was really nice to see that.”

“The win was a result of teamwork on both ends of the court,” said McCaughan. “To have everyone contributing makes the game that much more fun. We played for each other.”

The Pandas (19-9) outscored McDevitt (23-5) in every quarter. Leading 36-18 at halftime, Prendergast didn’t allow its foe any momentum moving forward. 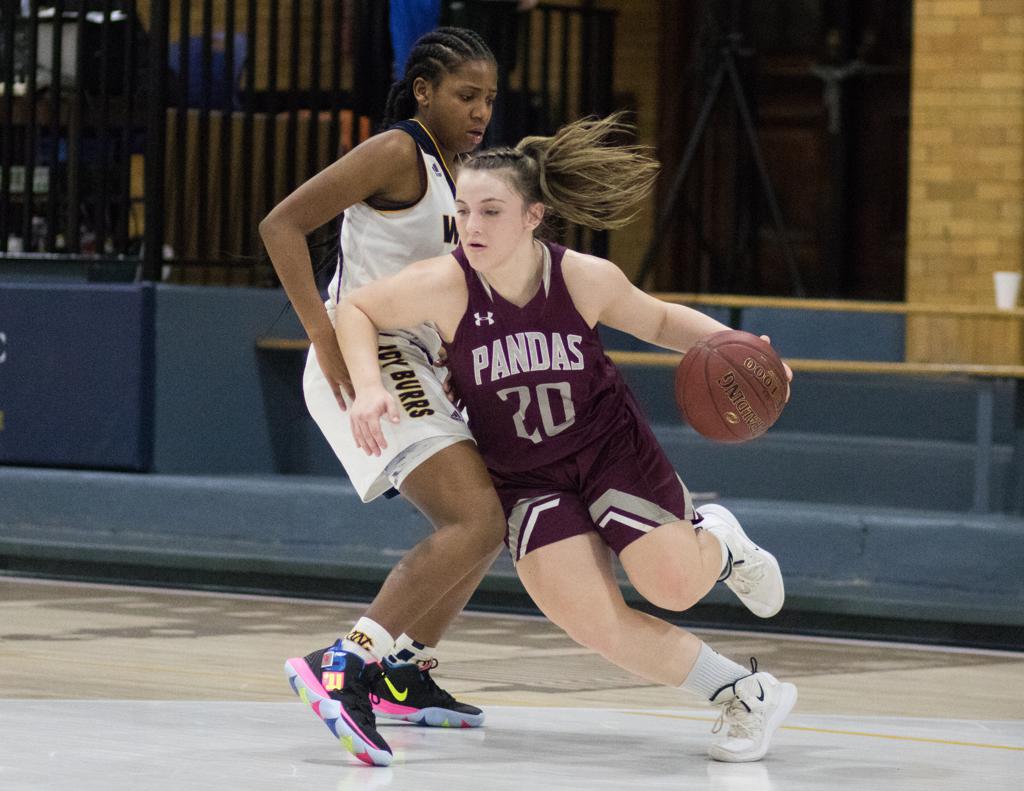 “The quarterfinal win was very exciting for my coaches, teammates, and I,” said McCann. “It is pumping us all up and getting us very excited to keep competing. We are really coming together as a team and all of our hard work is paying off. We are all working hard for the upcoming game and taking everything one day at a time.”