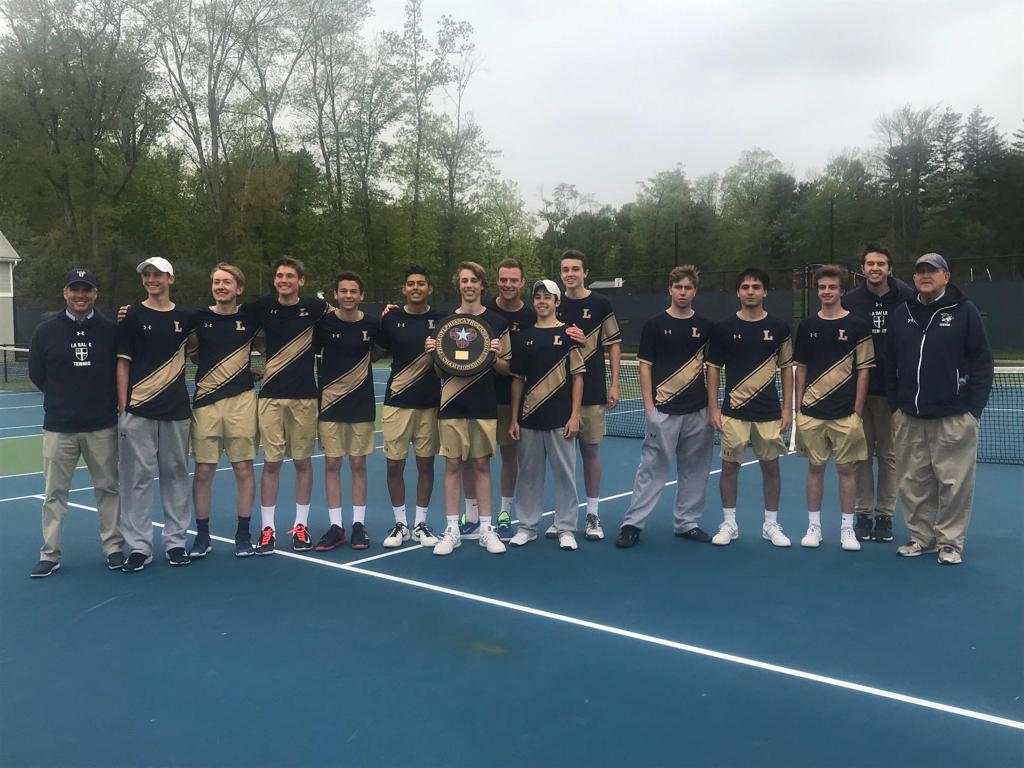 Throughout this timespan, one thing has remained a constant- La Salle College High School’s tennis team’s supremacy over the Philadelphia Catholic League.

“Coming into today we all felt confident and we had faith in our teammates,” said senior No. 2 singles player Owen DeAngelis. “We were all battle tested and we came out on top with four victories, which is really impressive against a really strong Prep team.”

St. Joe’s Prep’s sole victory of the afternoon came on court two as Hawk’s senior Russ Seneca defeated DeAngelis in straight sets, 6-2, 6-2. After being defeated by DeAngelis in the championship last season, Seneca made it a goal to win his final match in Prep uniform, a feat he can now cross off his bucket list.

“I personally got to beat Owen this year and I thought it was a great success and I was very pleased with myself,” said Seneca. “I knew last year it was going to happen. I lost to him in the regular season, but I didn’t let that bother me.”

While DeAngelis lost his match, his teammates were quick to credit him with the continued success of their program. Looking back on his career, as a sophomore DeAngelis’ match was the deciding factor that enabled the Explorers to win the title back in 2017. Not only has DeAngelis been a force on the court, but he has been an integral leader off the court as well.

“I met Owen my freshman year and he was the only other underclassman on the team. Me and him played No. 1 and No. 2. He was really the person that introduced me to high school tennis because growing up it was all by myself, winning by myself, losing by myself, no one to pick me up, no one to celebrate when I won.

“He has just been an emotional leader every year. Even when he was a sophomore, he was still one of the biggest kids on the team, literally, but he was always there. Even though I know he lost his match, he was still there cheering my match on and cheering every other match on. He’s a great leader,” said Porreca.

This year, the Explorers posted an undefeated 8-0 regular season PCL record and only dropped their first match of the year against Upper Dublin to go 12-1 on the season overall. La Salle will advance to play in the District 12 3A Championship on May 9 at Abraham Lincoln High School.

Winning 13 straight titles is a tremendous feat. When asked what has attributed to the Explorer’s success, Porreca was quick to address his team’s unselfishness and support.

“Everything that I learned here is that it doesn’t matter how far down you are in a match, all of your teammates are cheering you on and all of your teammates have your back,” said Porreca. “My freshman year, we were down and Owen lost the first set, but he came back and won that and it was awesome. Last year, we crushed it and everyone was cheering the whole time, we did so well. And this year, everyone was down at one point, but we came back as a team and got everyone hyped up.”

On the road to the championship, the Hawks garnered a 7-1 PCL record during the regular season and defeated Devon Prep 4-1 in the PCL semifinals. While Seneca will be moving on to a new life at Penn State, he knows it’s only a matter of time before the Prep gets their turn at hoisting the coveted PCL plaque.

“La Salle is always going to be a tough competitor,” said Seneca. “Your time will come.”

SJP senior Russ Seneca discusses how playing for Prep tennis has molded him & attributed his growth on the court to his family:

LSCHS senior Owen DeAngelis talks about how playing tennis for the Explorers has shaped him into the person & player he is today:

(L to R) SJP seniors Rich & Mark Stahl enjoyed making it to the PCL championship during their 4 years on the team & leave advice for their returning teammates: