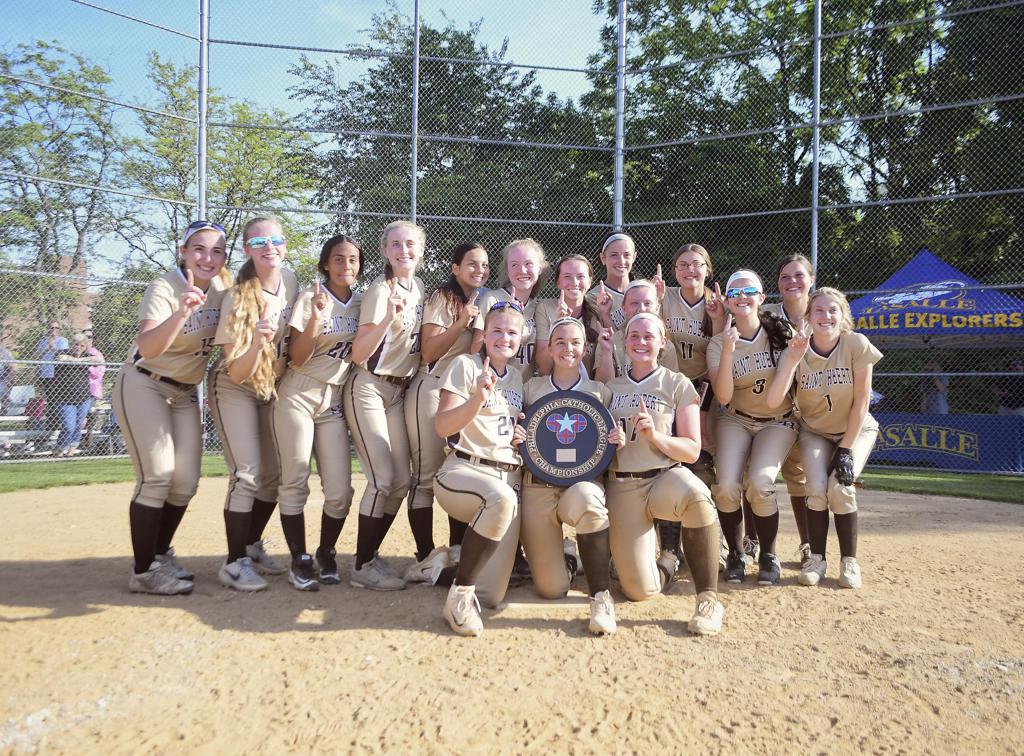 PHILADELPHIA –The heart of a champion. There’s really no other way to put it.

After senior Jordan Frye squeezed a soft pop-up at 5:38 yesterday afternoon, St. Hubert’s players, coaches, and boisterous fans clamored in collective exultation, both on the field and in the La Salle University stands.

For the first time in seven seasons, the Bambies were crowned the queens of Catholic League softball. Their 6-5, nine-inning victory over top-seed and previously undefeated Cardinal O’Hara was their fifth overall title.

“We started in the gym in November, then we started outside in March,” said Frye. “It’s been a lot of work and a lot of time spent into it, and it’s great to come out on top. It feels so good. All that work paid off.”

Frye was, in a word, spectacular. She batted five times and contributed a walk, two singles, a home run, and a double. Frye scored half of Hubert’s runs, including the eventual game-winner in the ninth when she doubled, moved to third on a perfect bunt by senior Erin Hogan, and beat the throw home following senior Riley Gorman’s grounder to short.

Although Frye also slammed a two-run homer in Hubert’s 8-7 semifinal win over two-seed Lansdale Catholic, this round tripper in the top of the seventh proved pivotal because it gave Hubert a 5-3 lead before O’Hara tied the game in the bottom half on a two-run single by senior Allison Ahearn (3-4, four RBI) that sent the contest into extra frames.

“It definitely felt good coming off the bat, so I kind of had a feeling,” said Frye. “It’s great to just get up there and swing like you know how to swing and help out your team all that you can.”

“She is probably the best hitter we’ve ever had,” he said. “She combines singles with a long ball. She has that innate ability to drive a pitch that’s sweet to her a long distance, and she can fight off a pitcher’s pitch and get a single or double out if it.”

Dave, who earlier this season collected his 500th career coaching victory, immediately pointed out the irony of Frye catching the final out. In each of the three previous seasons, he said, Frye had made the final out in a playoff loss.

This time, however, she was on the opposite end.

“This one is so sweet,” said Schafer, now owner of a combined 17 league titles. “It’s so nice, only because of the kids. They battled.

“We started the year off really down. O’Hara killed us in the beginning of the year. We made a couple of changes. They all bought in to everything that we were doing and they just kept plugging and plugging.”

The Bambies became the first team in league history to lose only three games during the regular season and then defeat each of those teams in the playoffs.

They lost 14-4 to O’Hara on March 26; 6-5 to Archbishop Carroll on April 2; and 6-5 to Lansdale Catholic on April 23. Then the Bambies shed the image of a docile deer and embraced a ferocious snarl reminiscent of the character “Sulley” in “Monsters, Inc.”

After the loss to LC, they finished the regular season with four shutout victories over playoff teams (Bonner-Prendergast, defending champion Archbishop Ryan, Archbishop Wood, and Conwell-Egan) by a frightening collective margin of 39-0.

“We took the motto, ‘You don’t want to play us in the playoffs,’” said Schafer. “That was our motto going through. The three teams that beat us during the season, we had a chance to play them again. They were three great games.”

Hubert’s responded by beating Carroll in the quarters, Lansdale Catholic in the semis, and O’Hara in the riveting final.

“I can’t be happier for a group of kids,” said Schafer. “We were an afterthought by most teams and the way we played in the beginning, who wouldn’t have thought that way?”

For five innings, it appeared as though the Bambies’ amazing late-season run was about to be tackled. Hubert, which began and ended the decade with championships (2010, 2019) and also snared crowns in 2008, 2009, and 2012, had amassed a tepid three singles and a walk and had fallen behind 3-0 after five innings.

Don Schafer reflects on his 31 years as an assistant coach to his brother Dave:

Sophomore Sierra Gozzi came up big when her team needed it most:

Jordan Frye is asked about her seventh-inning home run:

With O’Hara six outs away from capturing the school’s first-ever softball championship, the Bambies transformed the Lions’ dream into a nightmare.

Freshman Riley Long started the sixth with a walk. Frye singled and Hogan walked to load the bases. Gorman walked to break the shutout bid, then sophomore Sydney Scott beat out an infield single, and a subsequent throwing error resulted in a 3-3 tie.

Senior Julia Nolan walked to re-load the bases. One out later, sophomore Sierra Gozzi, who had scored three runs and went 2-3 in the semifinal win over Lansdale Catholic and in the fifth inning of the championship had made a brilliant catch in dead center field that saved a possible two runs, blooped a single to left that scored Gorman with the lead run.

Frye’s round-tripper in the seventh upped Hubert’s lead to 5-3, but O’Hara answered with two runs and had two on and no outs. With the season on the brink of extinction, Hubert senior pitcher Lindsey Davies induced a groundout from short to third for the first out.

O’Hara senior Lexi Galli then drilled a shot headed toward right field but thwarted by a diving Long, who kept the ball in front of her and started a confusion-mired four-six-five force-out. A pop out to Hogan ended the threat as overtime beckoned.

“I just tried to keep it from the outfield,” said Long, who injured her arm on the dive but remained in the game and came within about 15 feet of smashing a home run in the top of the eighth.

Told that her defense literally saved the season, Long just smiled, the frosh preferring to defer the moment to the rest of the squad, one that included junior Amber Dalton’s sensational basket catch after a dead run from right to center that ended the home eighth.

“I don’t have any words,” said Davies, who faced 41 batters and only walked one. “I am just so excited to bring the plaque home to St. Hubert’s. This is the highlight of my career. Hands down, have to say that.”

Each of Davies’ teammates would undoubtedly second that motion.