PENNSBURG, PA – If not for a blessing in disguise, the Malvern Prep Friars might not be state champions.

Trailing Perkiomen School, 4-3, in the bottom of the seventh and three outs away from a disheartening loss in the Pennsylvania Independent Schools Athletic Association (PAISAA) championship on a chilly evening May 25 at Upper Perkiomen High School, senior Chris Newell had a plan – surprise the Panthers by bunting for a single.

But Newell didn’t execute. For that, Malvern’s baseball faithful is extremely grateful. On the next pitch, Newell slammed a no-doubt-about-it home run to tie the game at 4-4. 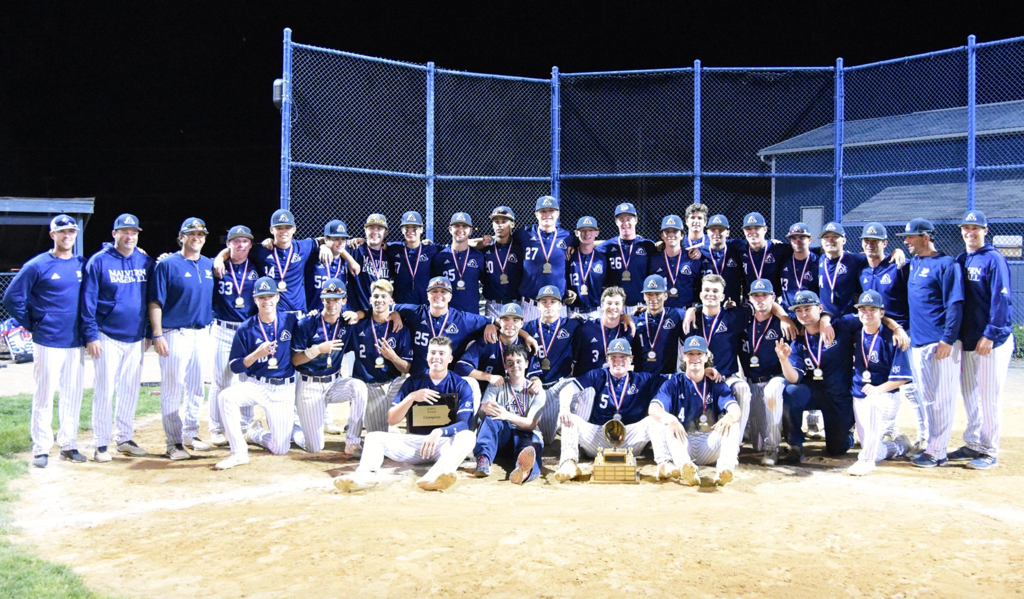 “We needed the first 90 feet and see what happens from there,” said Newell.

“It was a ball. Their baseman moved in. I was waiting for something hard to hit. It happened to go out.”

While junior pitcher Josh Paulina was mowing down Perkiomen to the tune of one hit and one walk through five sterling innings that included 13 strikeouts, junior Cam Conley etched his name in Malvern’s voluminous record book.

In the bottom of the ninth, junior Jarod Wade doubled and Newell was intentionally walked. After a grounder forced Wade at third, Conley fell behind, 0-2. With his teammates standing in the dugout exuberantly encouraging him, Conley drilled a laser over the left fielder’s head.

Newell rounded third, threw his helmet in the air, and slammed both feet on home plate. The Friars then rushed to second base to manhandle the heroic Conley.

“Baseball is supposed to be fun,” said Conley. “It was definitely nerve-wracking. Just gotta simplify it. Short swing . . . just try to put the ball in play.”

Newell scoring the winning run was emblematic of his sensational individual contribution.

His first-inning home run decided a 1-0 quarterfinal win against Germantown Academy. As junior Tristan Corcoran was tossing a four-hit complete game in the 5-1 semifinal victory over Haverford School, Newell crushed two round-trippers. The coup de grace was the mega-clutch, game-tying blast in the seventh against Perkiomen.

In 12 at bats over three games, the University of Virginia-bound centerfielder was retired only twice. In his other 10 opportunities, Newell generated a staggering four homers and six walks. He also scored seven of Malvern’s 11 runs.

“We knew if we could just find a way to tie it, we’d be in great shape with Josh Paulina throwing lights out the way he was,” said Malvern coach Freddy Hilliard. “Thankfully, Chris stepped up and changed everything with one swing.

“Special players make special plays on special days, and Chris’s performance in the playoffs and that swing were the stuff of legends. To hit a ball in that moment at a park that big through a crosswind was truly incredible.

“From there on out, it was just about creating another opportunity to score because they clearly were going to have a tough time scoring on Paulina, and thankfully Cam came through with another big swing after Jarod and Chris were able to reach.”

In capturing their third straight PAISAA title, fifth of the past six, sixth of the past eight, and eighth since 2006, the Friars appeased the disappointment of not seizing the Inter-Academic League title, something Malvern has enveloped on seven occasions either outright (five) or shared (twice) since 2011.

They stockpiled 32 wins (against only seven losses), the most in Hilliard’s 10 seasons and possibly a school record. Of their four losses in the Inter-Ac, three were by scores of 2-1 (twice against Haverford School; once versus Inter-Ac champ Springside Chestnut Hill), and the other by 6-4 (Germantown Academy).

“I’m just really proud of our kids and staff because their toughness and determination was certainly tested and they refused to end this year as anything but champions,” said Hilliard. “They’re a special group of young men, and I’m really grateful they got to end it the way they did.”

The man of the hour, Cam Conley, reflects on his walk-off double:

Chris Newell talks about hitting two home runs in the semifinal, slugging a game-tying home run in the 7th inning of the championship & scoring the winning run in the 9th:

Josh Paulina threw brilliant baseball in the late innings to get the pitching victory:

He wasn’t the only one.