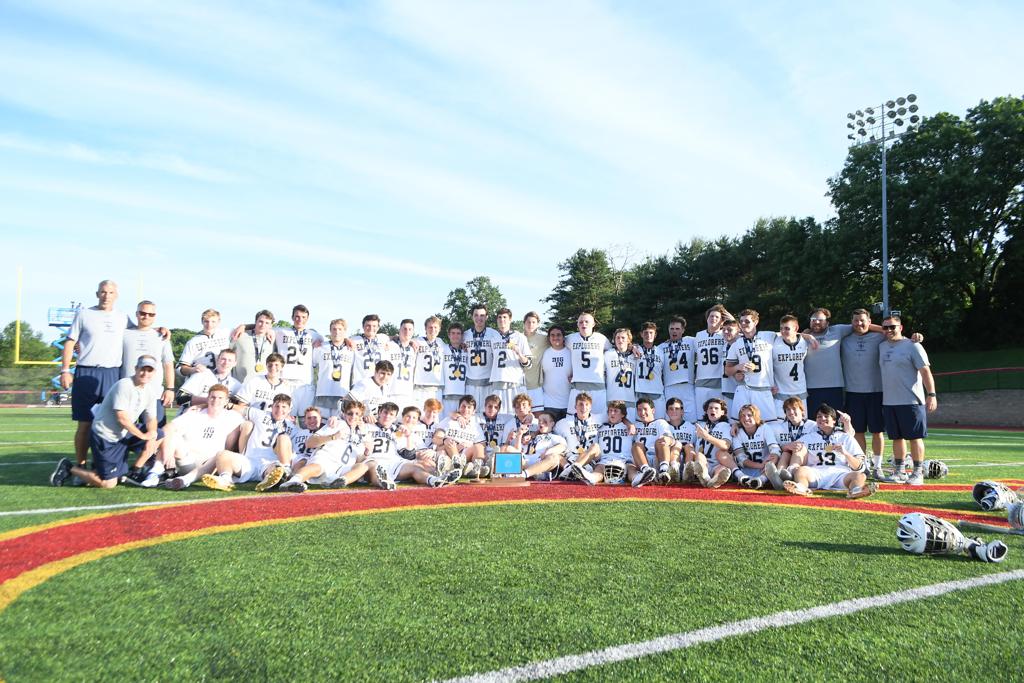 WEST CHESTER, PA –The entire season came down to the last two minutes, and that’s when La Salle dug deep to establish itself as the best lacrosse team in Pennsylvania for the fifth time in school history.

With the score tied at 5-5 in the PIAA Class 3A state championship June 8 at West Chester East High School, the Explorers scored two goals inside the final 85 seconds to stun Conestoga, 7-5.

The Explorers had allowed a comfortable 5-2 lead to fall apart late in the fourth quarter. But with 1:25 remaining in regulation, senior Zac Coar scored the most important goal of his life to regain a 6-5 lead. A minute later, junior Danny Mallee sealed the deal with an insurance tally.

“This is the craziest experience of my life,” said Mallee.

“Being down six goals going into the fourth in the semifinals, fighting all the way back, and then coming out here and just outworking Conestoga . . . it’s the best feeling ever.”

Coar needed to watch the replay of his heroics.

“I personally didn’t see the ball go in the net,” said Coar. “I hit the ground and then I heard the fans cheering, and I was like, I guess it went in. I was super hyped.”

After some time to reflect, various Explorers chose one defining moment on this year’s championship ride that stood out most.

Zac Coar(Senior; attending Drexel University) – “The moment that stood out to me the most on this year’s championship ride and playoff run was after the PCL championship (9-1 victory over St. Joseph’s Prep). I was asked by a reporter what led to the team’s success in the game and I simply replied, “Culture eats talent for breakfast,” something that coach (Bill Leahy) always stressed the importance of. This year’s team, on paper, might not have been as talented as other La Salle teams in years’ past, but we had a group of close-knit, driven, and hungry dogs that wanted to win a state title for each other and the coaches more than for ourselves.”

Brett Mallee (Senior; attending Yale University) – “This is a little abstract, but for me it was our service trip. On this trip we dug out a stump. Then we brought it back to La Salle and replanted it or “dug in,” which is our team motto. We would touch it everyday on the way to and from practice. ‘The Stump’ became a part of our strong culture that carried this team.”

Ben Rivera (Senior; attending Fairfield University) – “I really had to think about this. I think it was when we played against Hill Academy. They are always one of the top teams in the country and we were just coming off a bad 21-10 loss to Seton Hall Prep. So it was a test for us as a team to see how we would come out and play. It was a battle the entire game but we just fell short in the end and lost, 9-7. Even though we lost, our coaches were proud of the way we played because we fought hard. That game proved to our team that we could play with any team out there and we can win big games.”

Griffin Zobel (Junior) – “The defining moment for me, probably the easy answer, had to be our fourth-quarter comeback against Garnet Valley (in the state semifinals). In the fourth quarter I got put in because I had a lot of free energy and I could go attack the ball a little on the defensive end. I remember the attack man that I was guarding chirping in my ear, telling me how a public school was killing us. Down 10-4 in the fourth, somehow we started getting momentum. Our offense was finishing high on the goalie, who kept dropping low. And our defense was not only getting stops, but we had takeaways that stopped Garnet Valley from possessing the ball and running the clock out. I remember Christian Suter, our starting goalie, looking at me like, “Holy bleep. We are actually coming back!” Once we tied it up, (assistant coach Tony Resch) put our starting pole, Ben Rivera, back in to close up the game. The thing with this team is that everyone was a role player. Nobody complained or pouted when they were taken out or moved around. We moved an all-state midfielder in Chris Mockaitis to (defensive midfield). We took out our starting pole in Ben Rivera in the fourth against Garnett Valley for me. He didn’t complain when he got taken out because he believed in our coach knowing this could be our last game. Everyone had that mentality that Ben had, and there were countless other moments where that mentality applied. I’m so proud of these guys and of this team.”

Zac Coar says he did not see his game-winner go into the net:

Danny Mallee talks about the "craziest experience" of his life:

John Giuliani is asked about a key face-off that he won down the stretch that proved vital to the state championship win:

Chase Rondeau (Senior; attending Ursinus College) –“Probably the loss to the nationally ranked Hill Academy, 9-7. We had been having a rough start to the season and that close loss showed us that we could hang with good teams and that our hard work was starting to pay off.”

Christopher Mockaitis (Senior; attending the University of Massachusetts) –“The coaches changed our line-up from midfield as well as defense. We came back a better team.”

Rob Foster (Senior; attending the University of Tampa) –“If there was one defining moment in this year’s championship ride that defines us, it would be our loss against the Hill Academy (9-7). Even though we lost, this was the first time we came together as a team and played four quarters of true La Salle lacrosse. From then on, we knew we could make a run at the state championship as long as we believed in ourselves.”

*CLICK HERE to See & Purchase Additional Photos from the Championship*

Christian Suter (Senior; attending the College of Charleston) – “I’d say the defining point would either be our two-goal loss to the Hill Academy because a lot of people were doubting us and that proved to the team we could hang with the best. Or I’d say our OT win over Saint Augustine Prep because after that win we gained a lot of momentum and came together as a team even more.”

Mason Lazasz (Sophomore) –“Tough question because we had so many memories as a team this year. I think one of our most defining moments as a team would be after getting destroyed by Seton Hall, our whole team decided that we needed to get together and have a team bonding night where we played basketball, talked, and got to know our teammates better and connect to one another. I think after that night of bonding we really understood each other and trusted each other as brothers more than as teammates. We still had our rough patches, but all in all, we really connected and everyone became just a player. There weren’t freshmen or sophomores, etc. We were all equal varsity athletes ready to take on anyone. That is just one memory out of many throughout our season and I’m sure there are 20 more that were just as important.”

Kyle Cullen (Junior) – “Obviously the Garnet Valley game comes to mind. It epitomized this team’s character and season as a whole. We didn’t have many games this year where we played a good 48 minutes. But heart and grit were never the reason for our miscues. Being down by 10-4 with about 10 minutes left, our team was not ready to give up. We scrapped really hard to get every possession and stop we needed, and we found the back of the net seven straight times to keep our goal of winning a state championship alive.

Danny Mallee (Junior) – “If I had to choose one defining moment in this year’s championship ride it would be the double overtime win against Garnet Valley for sure. We went into the fourth quarter down, 10-4. It wasn’t looking too good and almost everyone in that stadium believed that our season would be over after this game. The coaches and team stuck together and played our hearts out until the final whistle. One of our team mottos during the playoffs was to “keep believing.” All of us sure did ‘keep believing’ and were able to trust our brothers and come back and win the game, 11-10, in double OT. That would definitely be the defining moment in our championship run this season.”

Kurt Wessner (Senior; attending Marist College) – “The most defining moment I would say is (assistant coach Tony Resch) talking to us about how each and every game is a Super Bowl and we need to play our absolute best. I also told the guys at every practice before the upcoming games that it’s not always the best team that wins but it is the team with the most heart and wants it more. This year there was truly a different vibe in the Class of 2019. We’ve been to the state ‘chip three times and we really wanted to end out on top and would do anything to reach the peak.”

Shane Osborne (Senior; attending the University of Denver) – “I think the overall defining moment of the year was when Coach Leahy chose ‘Dig in’ to be our theme for the year. I can’t think of one defining moment that really tells you about this team. Coach Leahy and Coach Resch preached about how we dealt with so much adversity and how our responses were great. I think the theme of digging in and fighting through adversity as a team is the clear defining factor of the team. This translated onto the field and it was truly amazing how it all came together.”