BOYS’ SOCCER: As Playoffs Loom, Six Teams Vie for a Coveted First-Round Bye. See Who Leads the Pack in This Week’s PCL Round-Up (10/3)

PHILADELPHIA – The home stretch is upon us, and most of the 13 teams that comprise Catholic League boys’ soccer know they’re going to make the playoffs.

In fact, a handful of contenders have already clinched a spot as one of the top 10, but finishing one through six guarantees a coveted first-round bye. With little more than one week remaining Father Judge (8-1), La Salle (8-1), Roman Catholic (8-2), Archbishop Wood (7-2-1), and Lansdale Catholic (6-2-1) have stamped their ticket.

For those vying to finish among the top six, key results on Tuesday included Roman Catholic’s 1-0 victory at Archbishop Wood and Father Judge’s 1-0 win at Lansdale Catholic. For those struggling to stay alive, triumphs by Conwell-Egan (2-1 over O’Hara) and Carroll (1-0 versus Devon Prep) could prove significantly beneficial.

Roman’s win gained attention because the Cahillites had just dropped a 3-2 decision to Archbishop Ryan on September 27 and were now facing a Wood team that had not allowed a single goal during a 6-0-1 stretch.

But in overtime, senior Kieran Donnelly scored on a free kick served by senior Sebastian Gonzalez, thus ending the game in sudden-death fashion.

“The loss to Ryan was, in many ways, a reality check for my team,” said Donnelly. “It helped us focus on what we need to work on, motivated us to work harder, and helped us understand that if we want to be successful, it will not be easy. We definitely were more determined and focused approaching our game against Wood. 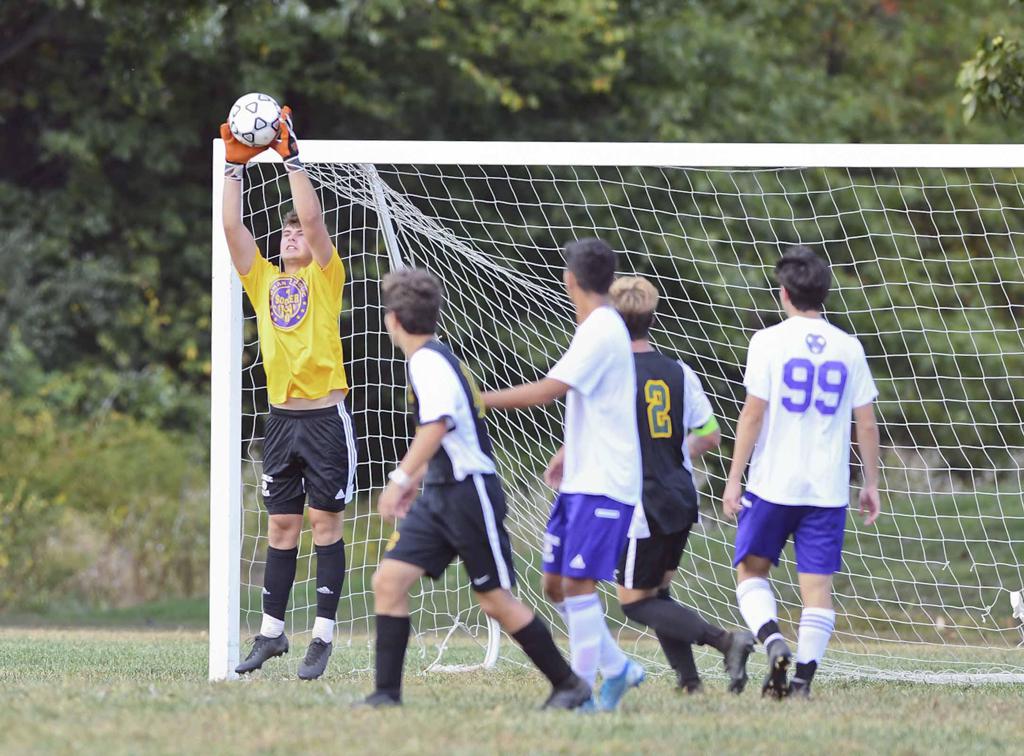 “As for my goal, I simply happened to be in the right place at the right time. It was an intense game, well fought by both sides, and the result could’ve gone either way. I credit my teammates for playing our strengths throughout the game.”

“I thought we played a lot better and played more together,” said Tobin. “Our defense was more focused and got the job done.”

Tobin was asked what it’s like to be a goalie and watch your team score in overtime from the other end of the field.

“It was a big relief,” he said. “It’s probably the best feeling for a goalie in that situation.”

Since a stunning loss to Lansdale Catholic back on September 20, La Salle has rediscovered its mojo. Junior Ben Herron more or less predicted that would happen.

“The loss against Lansdale Catholic was definitely a learning experience for the team,” said Herron after the game. “As a team, this game taught us that we can’t be overconfident and take any team lightly in the PCL. It was definitely the low point of our season so far, and we look forward to getting back into the groove and bringing intensity to our next opponents.”

That’s precisely what occurred. In three wins since, the Explorers have outscored their opponents by 15-0. This includes Tuesday afternoon’s 4-0 shutout over St. Joseph’s Prep. Coming into the game, the Hawks had allowed a grand total of four goals in their prior eight games.

“We knew they needed the three points as much as we did, so we had to go out even stronger,” said LaSalle senior Jake Crawford. “It was a good first half and we got one around the 40-minute mark.

After that, we kept pressure up high and worked out a way to get three more. We’re doing our best to keep us at the top of the league.”

In Father Judge’s 1-0 win at Lansdale Catholic, senior Ryan Colfer scored halfway through the first half. Behind strong defense and goaltending by sophomore Bob Mulvenna, the Crusaders notched their seventh straight win.

On Friday, Judge takes on Roman. Four days later, they host LaSalle before finishing at Carroll on October 11.

“After we scored, our defense came up big for the rest of the game, keeping the ball out of our net,” said Judge senior Tim Purcell. “It was obviously a huge win and momentum builder as we’re getting ready for the playoffs, and it was awesome to see the way the team fought to get the ‘W.’

“We’re focused on grinding out these next few games and coming out with the points we need in order to secure ourselves a good position.”

“We came out strong and wanted to win against Ryan,” said Rifkin, who was recently selected to train with the prestigious Celtic FC International Academy camp later this month. “It was our game to show the PCL that we are here to compete this year. The whole team worked hard from the first minute to the last. They were physical, so we had to step up and go harder to every ball. We were solid in the back and didn’t let them get many shots off.”

C-E senior Luke Jackson knew the Eagles would be facing a major challenge.

“We knew coming into the Ryan game that they played through their striker (Sidiki Fofana), so we knew the game plan was to lock him down from the start of the game,” said Jackson. “After discussing with my team the game plan, we knew we had to mark him all game in order to win the game, and that’s what we did.

“Our younger underclassmen stepped up and took on a huge task playing against a very physical defense. It was a very nice team win.”