The “Pick Six” -  a turning point for a defensive unit, a wrench for the offense. PSD’s “Pick Six” highlights personal achievements, team highlights and unbiased turning points of our weekly Philadelphia Catholic League teams in their previously played league games.

What a Difference a Fingertip Makes

The visiting Explorers scored a touchdown to cut their deficit to one point, but Wood junior Rob Jackson did the unthinkable when he blocked the extra-point attempt, giving the Vikings a 21-20 Catholic League Red Division upset win.

“It was a great feeling,” said Jackson. “I just use the techniques our coaches gave me and executed. It’s all about timing.” 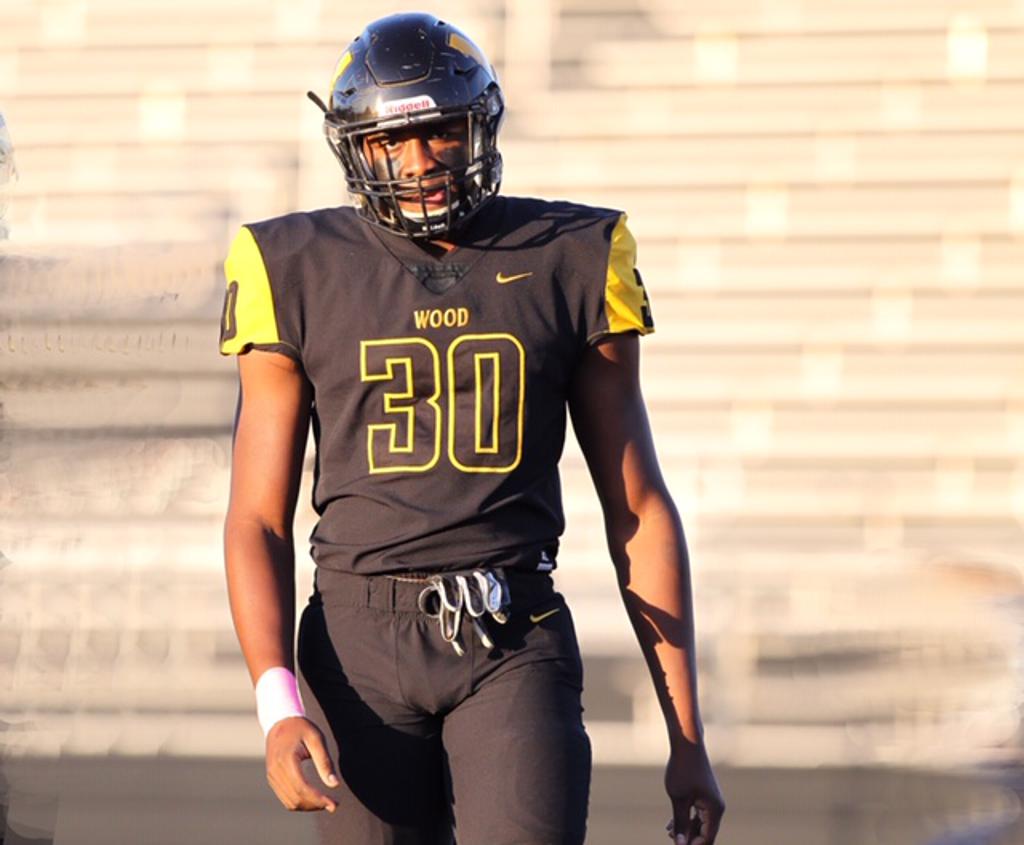 Three weeks earlier, upstart Roman Catholic had shocked Wood, 20-6. The Vikings were disappointed in their performance, but the only way to wash away the bad taste was to dig in and defeat a favored opponent.

“You could just feel the excitement in the air when the ball hit the ground,” said Jackson. “After (LaSalle) scored (to tie the game late in the fourth quarter), our coaching staff and teammates didn’t give up. We picked each other up when said to each other we were still going to give it our all.

“This win was major for us. We came out slow against Roman, and this game we came out ready to go, cleaned up our minor mistakes, and got the job done.”

Senior Ryan DiVergelis caught a touchdown pass – his fifth of the season. He has also rushed for a score.

“It was a great team win against a great LaSalle team,” said DiVergelis. “We really emphasize special teams, and for Rob to make that play in that situation, it was huge. It just shows how much hard work our team has put in up until this point in the season.”

In Archbishop Wood’s aforementioned 21-20 overtime win over La Salle, Bryan Kelly provided a highlight that was captured on video and will certainly be reviewed in the months and years to come.

Taking the ball at the one after a booming kickoff, Kelly cut right, broke free, avoided a tackle, and then remained on his feet after being tripped around the 20. He somehow steadied himself and raced the rest of the way for a 99-yard touchdown return – the longest kick return in Wood’s history, and the longest kick return that any high school player could experience since the play is declared dead if the ball reaches the end zone.

“The number one thing going through my mind during the return was that this was my opportunity,” said Kelly. “After our defense held La Salle to no points up until the final minute when they scored on us, our team’s energy and momentum was low and I wanted to do something about it.

“Once I broke through and saw nothing but green, I knew this was my opportunity not only to give my team momentum, but to contribute to a huge game. The kicker took a good angle on me, but I knew I had him beat.

“This was the first year I’ve ever been put back deep on kick return before, so it was very exciting to score my first time on it and to set a record at my school. The adrenaline really took over at that point, and celebrating with my team in the end zone is just a feeling like no other.” 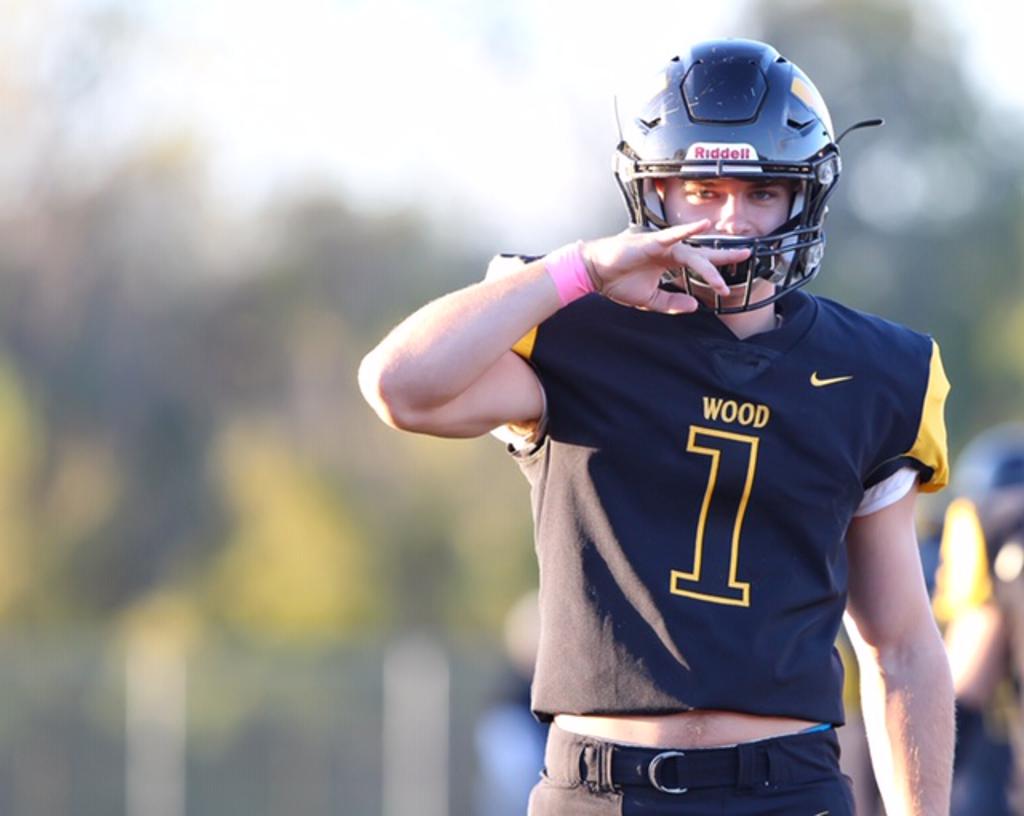 "Once I broke through and saw nothing but green, I knew this was my opportunity..." said Kelly about his record run. (photo by Patty Morgan for PSD)

Junior quarterback Daquan Robinson completed 8 of 18 passes for 147 yards and three touchdowns – all of them to senior Malachi Harris (6 catches, 95 yards). In two starts since taking for injured junior Jayden Pope (10 touchdowns), Robinson has amassed 384 yards and six touchdowns through the air.

Junior Shemar Ellis rushed for a career-high 182 yards and a touchdown on only 18 carries. Senior CJ Mole added 76 yards and two scores on seven runs. The Roman defense has allowed six points or fewer in three of their last five performances. 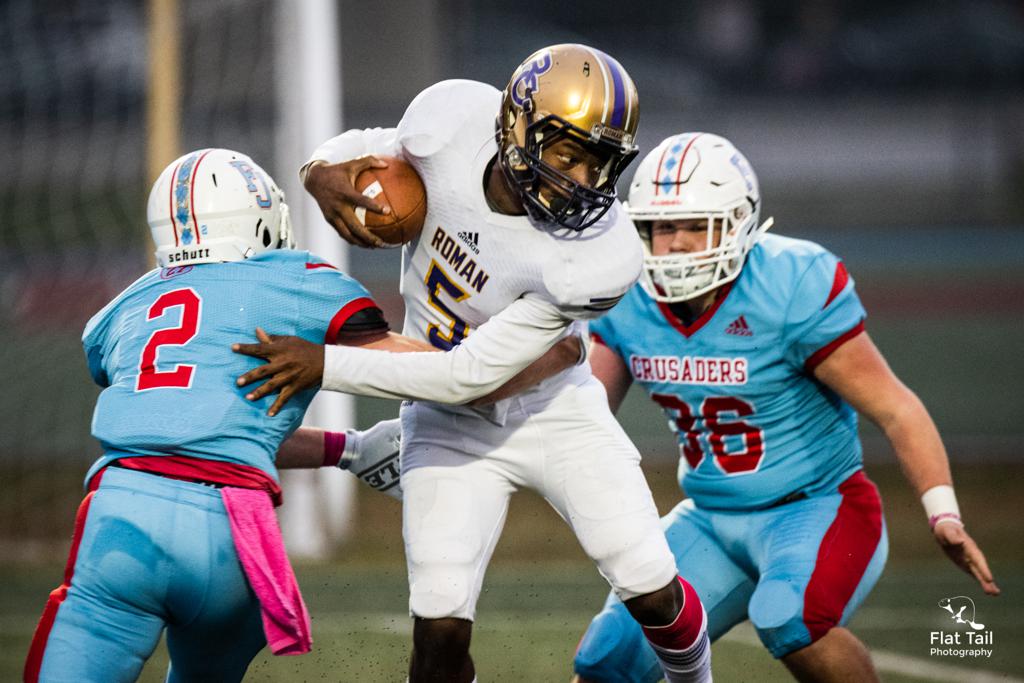 “I think our offensive line has done a tremendous job in pass protection,” said first-team coach Rick Prete. “Our quarterback play has been outstanding as well.”

“All week my team and I did a great job getting ready for Ryan,” said Harris. “We didn’t come into the game thinking it was going to be easy. We played them just as hard as we would play any other team. Coach Prete preached all week long that we couldn’t not sleep on this team.”

A Dozen Reasons to Celebrate

Back to Roman Catholic. Although a team effort top to bottom was responsible for the Cahillites’ systematic 43-0 victory over Archbishop Ryan, all post-game eyes were on Malachi Harris.

The senior wide receiver/defensive back set a school record with his 12th touchdown reception. In four Catholic League Red Division contests, Harris has scored in each game and snared eight altogether. 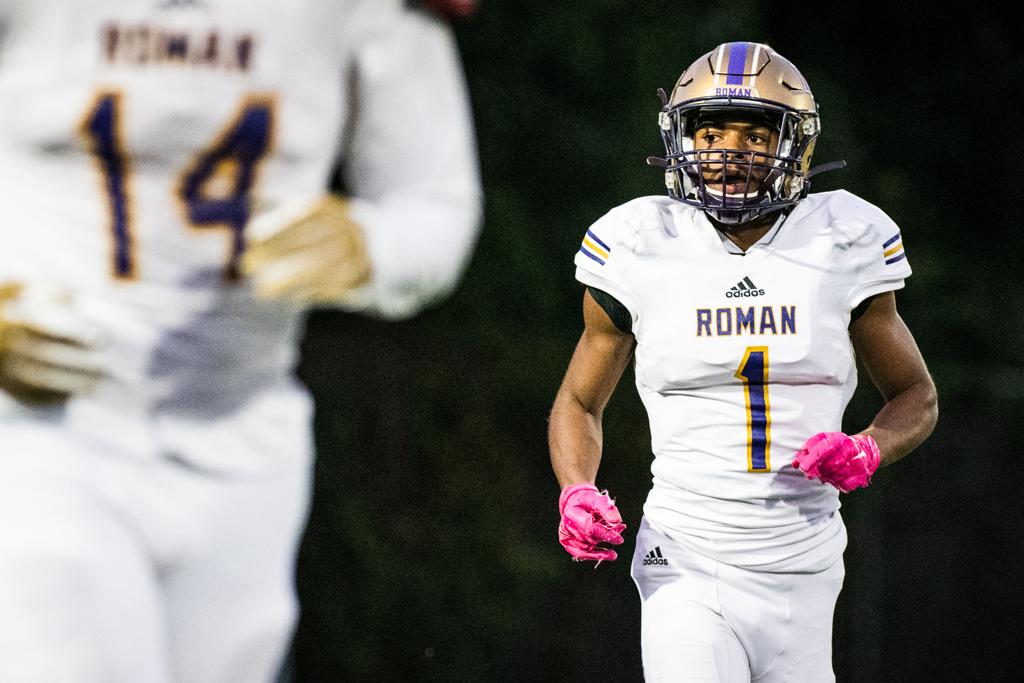 “It’s a blessing,” said Harris. “Passing some of Roman’s greats like Marvin Harrison and Will Fuller . . . it’s just an unreal feeling. I give the glory to God and thanks to my teammates, because I wouldn’t have been able to do it without them.”

“He has worked tremendously hard this year, as has the entire team,” said Prete. “He’s a technician and understands that teams are game planning for him. In my opinion, and of course I am biased, he’s the best wide receiver in the Catholic League and one of the best in the state.”

Freshman James Bermudez rushed for 108 yards and a touchdown on 14 carries and sophomore backfield mate Akrie Lilley also reached triple digits with 106 yards and a TD on 11 carries.

Bonner-Prendergast stretched its winning streak to five with a 32-0 victory over Cardinal O’Hara. The Friars (7-1, 5-1) have now surrendered a miserly 14 points in their last three games. Junior James Welde scored three touchdowns for the second time in four games. He caught both of junior Kyle Lazer’s two touchdown passes, and he also returned a fumble for another score.

La Salle lost, 21-20, to Archbishop Wood, but the Explorers’ defense held the Vikings to 89 yards rushing on 33 carries.