Neumann-Goretti wrapped up the Catholic League Blue Division in typically dominant form. The undefeated Saints defeated Lansdale Catholic, 30-9, and finished the regular season with a 10-0 overall record and a perfect 7-0 mark in the division. It was NG’s second title in three seasons and third since 2014.

Junior Tysheem Johnson rushed for 155 yards and two touchdowns on 23 carries. In last year’s season finale against the Crusaders, Johnson enjoyed an even better performance (185 yards and four touchdowns). Johnson’s 23 TDs have occurred via a variety of methods (17 rushes, three receptions, two punts, one kickoff).

Senior Malik Griffin made the most of seven carries, gaining 77 yards and scoring twice for the Saints, who have allowed a stingy 63 points in 10 games and outscored the Blue Division by 276-57.

“It was a moment to remember,” said sophomore Marqui Adams. “Our team was very excited, and so was I. This was my first Catholic League championship, but we are not done yet.

“We have put out hard work to get our goal accomplished, but we are still working and getting better every day at practice. That was just one goal. Now we are focused on getting the state championship and going 16-0.”

Since 2012, the Prep has lost a grand total of one regular-season Catholic League game and has finished undefeated every season since 2014. They have not lost any league game since switching the format to the Red and Blue Division in 2016.

“Winning the Catholic League is still a big deal to us,” said Prep senior Anthony Leneghan. “When we started this season in January, we set out our many goals for this season, and every year, our first big goal is win the PCL.

“It is a great accomplishment for us, but it also means that now, nothing else is guaranteed. It is time for us to keep getting better and working as hard as we can to keep our family together as long as possible. It is a bunch of one-game seasons from here on out.”

Cardinal O’Hara entered its game against visiting Conwell-Egan having scored 14 points in its past six games. The Lions, however, played their best ball of the season and left with a 25-17 victory over the defending Blue Division champ Eagles.

“We just had the mentality that we had to win,” said Kpoto. “It’s the last regular season game at O’Hara for many of us. It felt great to finally break the losing streak and win at home. I just made the most of every play and showed up when my name was called.”

Bonner-Prendergast increased its winning to six with a 19-8 win at West Catholic. The Friars (8-1, 6-1) have surrendered only 22 points in the past four games. Sophomore Mason Peterson’s 131 yards on 13 carries fueled the running game. Senior Oscar Udama scored two touchdowns and junior James Welde added another.

“This season has been very satisfying, but we’re not done yet,” said Welde. “We’re disappointed that we don’t get another shot at Neumann for the championship. We think we’re better now than when we played them.

“But we can’t change that, so now we’re preparing for two weeks from now."

The Explorers will face the Cahillites again in the PIAA Class 6A semifinals this coming week.

“I don’t think we’re looking at it as a disadvantage,” said La Salle senior Dillon Trainer. “Obviously it will be a challenge back-to-back. It’s hard to beat a team twice, let alone a week apart, but nonetheless, we have guys that look forward to the challenge and opportunity at hand.”

“The team effort this game was as good as it’s always been,” said senior Bryan Kelly, who rushed for 83 yards and two scores on nine hauls. “We had the mentality to go in this game and play to our standard regardless of the scoreboard, and we did just that. It was a great all-around team effort, especially offensively.” 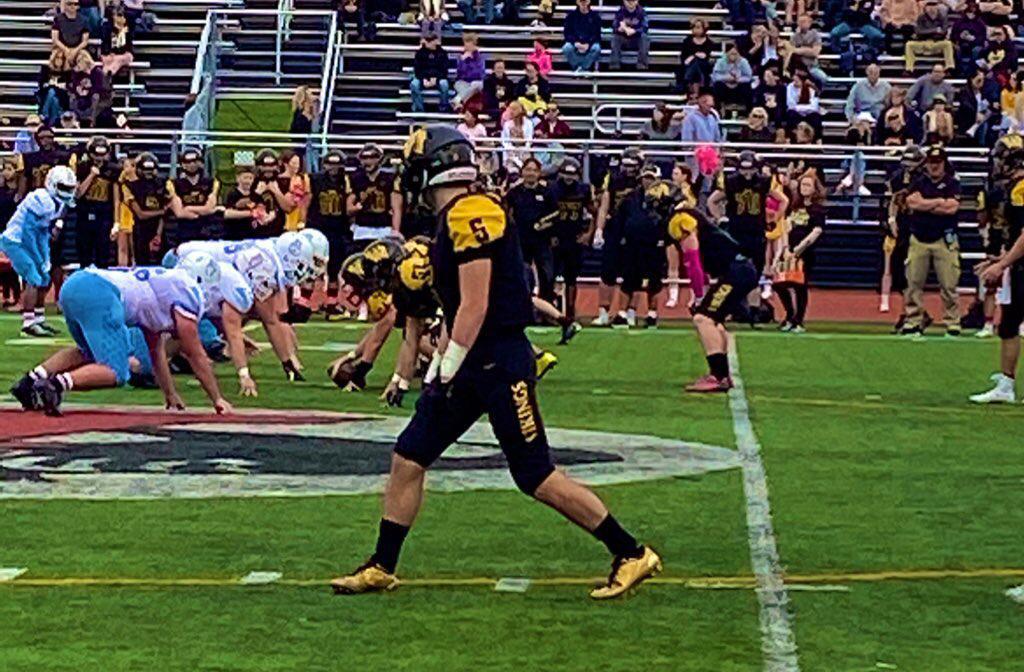