After successfully scoring in double overtime against fellow Philadelphia Catholic league blue division opponent West Catholic, a bad snap on the extra point attempt cost them the game as the Lancers fell 34-33.

Exactly one year later, McDevitt was able to put the past in the past and defeat West Catholic 9-8 to win the District 11/12 class 2A championship. 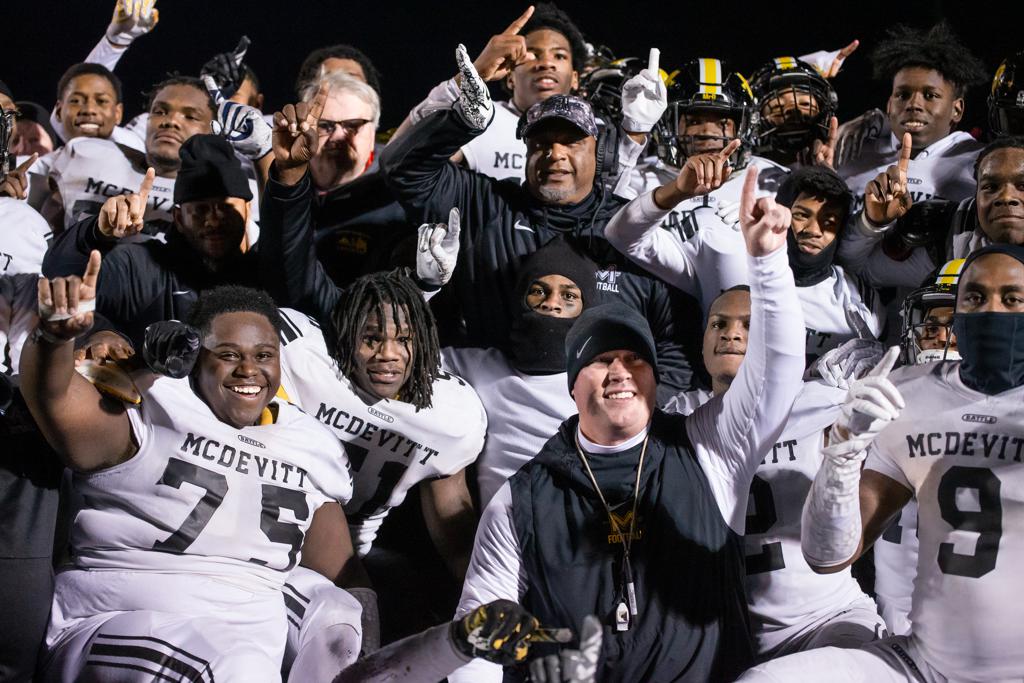 “I was up 364 days thinking about [last year’s championship]. After that loss last year, I had nightmares about it. I was thinking about it the whole week, the whole month, the whole year. That really gave me the mentality and the push to make sure we had a different outcome,” said Bishop McDevitt quarterback, Lonnie Rice (Univ. of Buffalo commit). “I did this for that group of seniors last year. We had a phenomenal group, we had a phenomenal team. I just played for my team, this year and last year.”

It was a brisk evening as these two teams faced off at the South Philly Supersite with a title and a trip to the PIAA state tournament on the line.

It looked as though history was ready to repeat itself as West Catholic quarterback Zaire Hart-Hawkins scored on a QB sneak to give his team the 8-0 advantage going into halftime.

“First half, everyone on the offense was working together,” said Hart-Hawkins. “The offensive line was getting a good push and we were able to move down the field and do a quarterback sneak before the half and it gave us the momentum.”

Despite the lopsided score, McDevitt remained confident. They may have been shutout in the first half, but the Lancers knew they had plenty of time left to do their damage.

“We had the mentality that once we come back out at half time, it was zero to zero again,” said Rice, who surpassed 4,000 yards from scrimmage this season to become Bishop McDevitt’s all-time leader in total yards. “We weren’t really worried about not scoring in the first half because it was a new game in the second half.”

Coming out of the half, things immediately started to favor the Lancers. A long opening kick return set the team up on the fifty-yard line and eight plays later they were on the board after a successful field goal. West Catholic held a narrow 8-3 lead.

“We were trying to find ways to get the ball moving. We couldn't close out two different times we were in the red zone and we just couldn’t close it out, but we were leaning on our guys,” said Bishop McDevitt head coach, Mike Watkins. “We were going to stick to our game plan with a few adjustments, but we trusted in our guys and just buckled down. We knew that we were going to make a play.”

West Catholic quickly moved down the field on their ensuing possession, looking to add some insurance to their lead. They were able to move into the red zone, but penalties would prove to be a drive killer, pushing the Burrs back to about the 40-yard line. West Catholic would ultimately turn the ball over on downs after an incomplete pass from Hart-Hawkins on fourth and long as the third quarter came to a close.

“The biggest thing going forward with our younger guys is to understand that you can’t have those mental mistakes,” said West Catholic first year head coach, Brian Wood. “You know, 14 and 15 year-olds, you expect some offsides and stuff like that, but not at critical points.”

McDevitt now had the ball and the entire fourth quarter to work some magic. They were able to move the ball into West Catholic territory with ease, but as they got into the red zone, mental mistakes began to appear as ensuing penalties set the Lancers up with a long third down conversion.

Just as it seemed their drive was going to stall, Rice called his own number and ran the ball up the left sideline to pick up the improbable first down. On the very next play, Rice dropped back, looked to his right and hit Ty Tindal in the corner of the end zone for the game-winning touchdown to take the 9-8 victory.

“We kept punching them in the mouth with the run game. Eventually, that got them to back off and it gave us room to run the smash route,” said Rice. “As soon as we ran the smash route, inside receiver had the corner, that corner was in cover three, he dropped back and as soon as he got back, the hitch was wide open. All he had to do was run in the end zone, just like coach (Watkins) drew it up.”

Bishop McDevitt QB Lonnie Rice is thrilled to make it to the state championship after losing in double OT in last year's District 11/12 championship:

McDevitt QB Lonnie Rice passes down words of advice to his underclassmen for next season in order to keep up the "Brick by Brick" mentality:

West Catholic would fail to score on the following possession, leading to a victory formation from Bishop McDevitt as they knelt on the ball and ran out the clock.

“[This win] feels great because we had such an interesting year. We’ve been really good at times and we’ve been really bad at times. We were leaning on such a small group of seniors, but they're so darn special, they built this thing,” said Watkins. “It feels phenomenal to be able to give this to guys like Lonnie Rice, Tyrone Fowler, Jack Conrad, you know all these seniors that we have, Hakeem Dodson, Eric Wilson, those are the guys that really deserve this thing. It feels great to be district champs and giving it to the seniors who built this thing.”

While this loss is painful, Wood sounded optimistic after ending his first season at the helm of the Burrs in the District 11/12 championship game. He may be losing several players to graduation, but he remains confident in his team and won’t be forgetting this loss anytime soon.

“Honestly, we’re going to be a young squad, but I think once I get my feet in as far as this offseason, we’ll pick it back up,” said Wood. “This film and the last film are bulletin board material. Me, being a West (Catholic) grad, this is going to be our rivalry game. So, I’ll remember this until we play them (Bishop McDevitt) again.”

On the flip side, Bishop McDevitt will celebrate their victory, but they must quickly prepare themselves for a much bigger goal: the state championship.

“We’ll enjoy the win. I tell these guys all the time, they’re so tough to come around, so we’re going to enjoy the win, we’ll rest up and we’ll get ready on Monday,” said Watkins. “It’s just great to be in the state playoffs.”