PHILADELPHIA – Jake Forrester remembers what it was like not to be able to play. After transferring from Indiana University following a freshman campaign where he only appeared in 13 games and averaged 4.2 minutes per game, it appeared the 6-8 sophomore would have to sit out for his entire first season on Broad Street.

With a new head coach in Aaron McKie and new culture being created at Temple University, Forrester desperately wanted to be a part of that, not only in practices but out in front of the crowd at the Liacouras Center. His wait lasted a total of four games as the NCAA approved his waiver, making him immediately eligible.

For Forrester, the opportunity to put his skillset on display was the biggest thing he missed and in Bloomington he did not truly get the chance to do that.

“It feels really good,” Forrester said. “I’ve been preparing for this every practice and in the offseason I was hearing I would get my waiver. It was good to be out there and show what I can do.”

Forrester led the way with 17 points and six rebounds off the bench as the Owls dismantled St. Joseph’s, 108-61 in the largest margin of victory in series history. The Big 5 matchup has been played 130 times and dates back to 1969 but never had the margin been higher than 32 until now. He entered the game at 17:46 and 48 seconds later he received a pass from senior guard Quinton Rose that turned into a right-handed slam. Forrester scored seven of Temple’s (7-2) first 10 points. His and-one score in the post gave the Owls a six-point lead at the 15:10 mark of the first half.

Another dunk by the versatile big man gave Temple a 14-4 advantage with 13:34 left in the opening half and its lead never dropped below double digits after that point. After having his waiver approved, Forrester made his first appearance as an Owl against No. 5 Maryland where he had six points in 12 minutes. He avg. 10.5 ppg over consecutive games between Davidson and Missouri and has found a primary spot in McKie’s rotation.

The first-year head coach isn’t surprised by Forrester’s immediate impact but he also knows his talented big man is only scratching the surface of what he can do.

“I knew we were getting athleticism and good size around the interior,” McKie said. “He still has so much room to grow as a basketball player. He’s skilled inside and he’s also a pretty good shooter. Over his career here, we want to be able to stretch him out a little bit more. He can rebound at a high level and defend at his position."

The Hawks (2-9) never found an answer defensively against the Owls and offensively they couldn’t convert. They failed to score for the first 3:17 of the game, but more detrimental was the night high-scoring guard Ryan Daly (Archbishop Carroll) had. The 6-5 redshirt junior came into the contest avg. 22.0 ppg and was coming off a career-high 32 points against Villanova. He finished with two points on 1-for-8 from the floor. One of his shot attempts in the paint was rejected by Forrester, which in turn ignited a fast break by Alani Moore II (nine points) and ended with a J.P. Moorman II triple to give Temple a 36-15 lead with 7:21 left in the first half.

Daly was matched up against Owls defensive specialist Nate Pierre-Louis, who had 12 points, six rebounds and two steals. He followed the St. Joe’s streaky scorer all over the floor and made it difficult for Daly to get comfortable.

After falling to the Tigers on Saturday, Pierre-Louis wanted to play with more of an edge and he made sure he was well-prepared for what Daly brought to the table.

“He’s a big time scorer and he’s their guy,” Pierre-Louis said. “My first thing was knowing he’s a driver. He’s a strong, right-hand driver so I tried to push him left. I know if I push him left, he’s going to jump stop, pump fake and kick it out. That’s what I was trying to do with him all game.”

Hawks head coach Billy Lange, whose team trailed by 25 at the break and shot 31.3 percent for the game, knows what opposing defenses are going to throw at Daly but gave high praise to Pierre-Louis and the Temple defense for stifling his star guard.

“I don’t know a team that’s probably not putting their best defender on Ryan based on his stats, output and talent,” Lange said. “I think it was their overwhelming athleticism to get to his drives and still get out to contest shots.”

Moore drilled a three-pointer with 18:06 remaining to push the Owls lead to 62-30. Two minutes later Rose (14 points) slammed one home to increase the advantage to 40 points. The separation between the two Big 5 teams continued to grow as the Owls scored 100 points in a game for the first time since 2013. Myles Douglas led the Hawks with 14 points and Toliver Freeman had 11 points as the only St. Joe’s players in double figures.

Forrester has officially returned to the fold of a team’s rotation, just as he was only three years ago on a juggernaut Westtown School that consisted of Mo Bamba (Orlando Magic), Cam Reddish (Atlanta Hawks), Anthony Ochefu (Stony Brook) and Brandon Randolph, who played at Arizona and has spent time in the NBA G League. Forrester was a key contributor on a team that won the 2017 Pennsylvania Independent Schools Athletic Association (PAISAA) tournament. He finished his high school career with 1,392 points.

Working in frontcourt with veterans like Moorman and Justyn Hamilton, the young big man is finding his role and focusing on adding more to his repertoire.

“I’m not solidified just in the post,” Forrester said. “Coach McKie will let me shoot the trail three if I’m in that situation. Tonight just wasn’t that situation which is fine because I’m not necessarily looking for that. I’m looking to get stops on defense and rebound and the offense will come to me.” 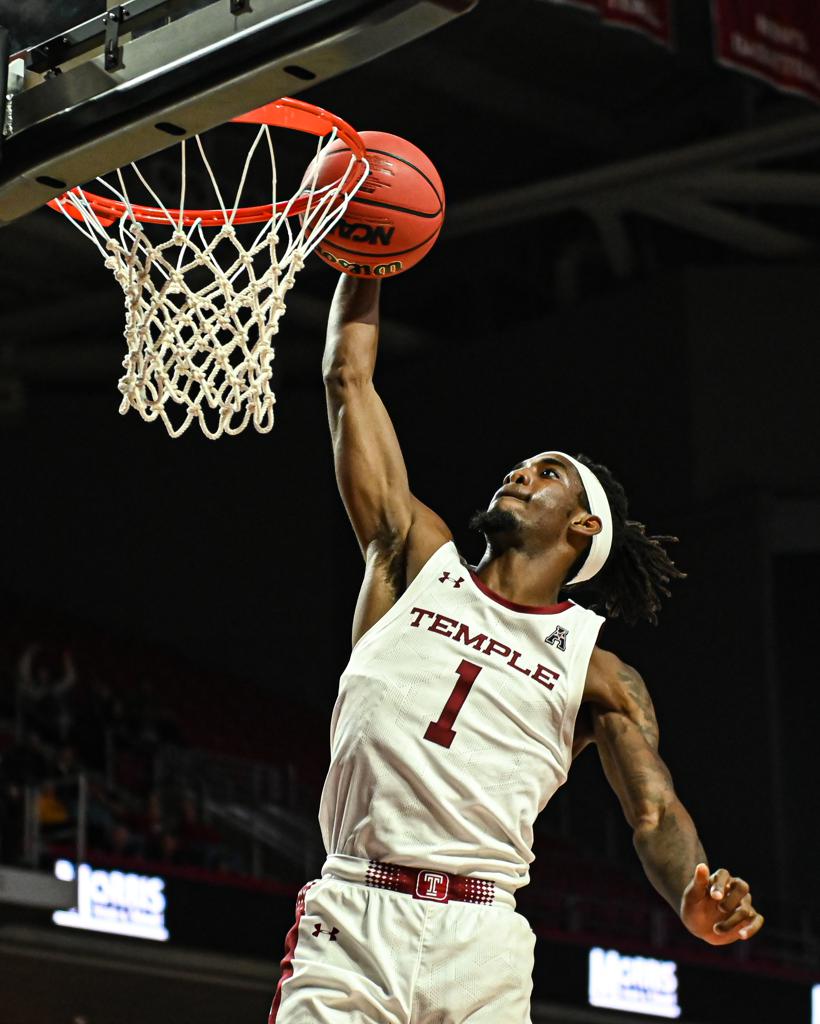 Looking Ahead: The Owls will travel to the Barclays Center to play Miami on Tuesday, Dec. 19 before returning home vs. Rider on Saturday, Dec. 21 at 1 p.m. The Hawks return to the court at home vs. William & Mary on Thursday, Dec. 19 at 7 p.m.