HERSHEY, PA – As both teams exited the locker room, climbed the steep steps, and prepared to make their entrance on the Hersheypark Stadium turf, the pre-game hype had reached a crescendo.

Central Dauphin’s players emerged first, busting through a makeshift sign and racing about 80 yards toward where St. Joseph’s Prep players had lined up, their loud yahoos attempting to intimate the Hawks, who collectively just smirked. 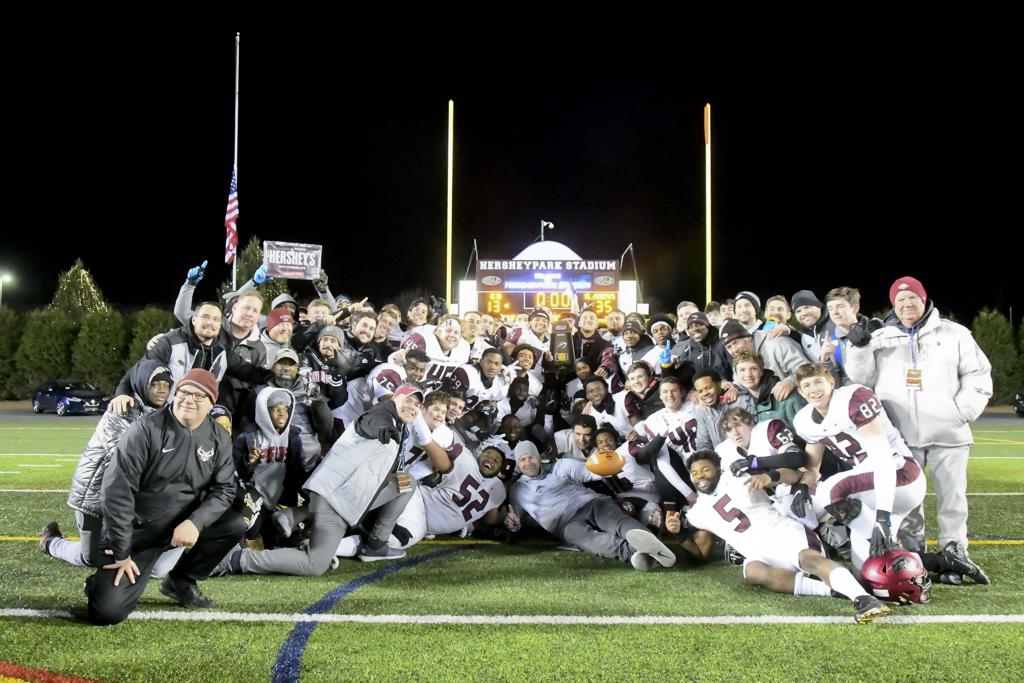 When it was their turn, the Hawks simply jogged to their sideline and got ready to start. There was a state championship to play, and unlike their opponent, the Prep was in an all-business mood.

“They’re just happy to be here,” said a Prep enthusiast. “For us, this is home.”

Like all responsible homeowners, the Hawks then went out and secured all borders.

With a dominant defense, a balanced offense, and opportunistic special teams, the District 12-champ Prep defeated its overwhelmed District 3 foe, 35-13, and captured a second straight PIAA Class 6A title – the program’s third in four years and fifth in seven.

Leading 14-0 thanks to junior Malik Cooper’s seven-yard touchdown pass to junior Sahmir Hagans and sophomore Maurice Clark’s 16-yard TD return of a blocked punt by junior Sean Walker in the first quarter, the Prep broke the game open on the first play of the second quarter when Cooper found Marvin Harrison in the middle of the field and watched the electric junior turn a short pass into a highlight-reel 35-yard touchdown.

“I knew I had a chance to score once the play was called,” said Harrison. “It’s one of my favorite plays in the playbook. I just knew I had to run a great route, catch the ball, make some defenders miss, and get to the end zone.”

For Cooper, the touchdown pass was one of numerous clutch throws he made since leaving his wide receiver spot – from where he had caught five touchdown passes – and taking over at quarterback. He was replacing junior Kyle McCord, who just happens to be the only player in Catholic League history to win consecutive Most Valuable Player awards before his senior year.

Cooper’s first challenge was in the District 12 final against Northeast High School on November 16. In what had the uncomfortable vestige of a shocking upset, the Hawks fell behind, 14-0, thus rendering the usually rowdy Prep crowd eerily quiet.

SJP Coach Tim Roken lauds his players for successfully finishing a venture that started back in January:

Casey Stephenson's enthusiasm was infectious, as was his physicality along the offensive line:

No matter. The Hawks ultimately dominated for a 43-26 victory, but still, heading into the PIAA state tournament with a backup quarterback was unsettling at best.

“When I found out I was moving back to quarterback, I was shocked and a little nervous,” said Cooper. “But I was definitely ready.”

In the win over Northeast, Cooper rushed for 84 yards and two touchdowns on 17 carries. In a state quarterfinal win over Nazareth, he rushed for 51 on only four hauls while completing eight of 11 throws for 58 yards and a touchdown.

Then came the game that, should Cooper never again play quarterback, will serve as the best performance of his career as a signal caller.

In the 31-24 state semifinal win over Pittsburgh Central Catholic, the Prep trailed by a touchdown and faced a fourth and 10 at the 12-yard line with 25 seconds remaining. With the season – and his legacy – on the line, Cooper connected with Harrison in the back of the end zone for arguably one of the greatest plays in Catholic League history. As brilliant as the throw, the unbelievable reception defied adequate description.

For good measure, Cooper scored the game-winning touchdown on a five-yard run in overtime. He finished the night 22 of 25 for 271 yards and the touchdown pass to Harrison, and he added 60 yards and two touchdowns on 18 rushes.

“We’ve been in positions like that before where we had to overcome adversity and injuries, so I remained calm,” said Cooper. “I had faith in my teammates and I knew that we were going to get the job done once the offense started to get in the groove.”

Liam Johnson talks about the brotherhood that emanates from St. Joe's Prep:

Senior Kolbe Burrell scorched Central Dauphin for 189 yards rushing and consecutive touchdown jaunts of 55 and nine yards on 25 carries, but, as is almost always the case with a successful running game, it was the big guys up front who did most of the heavy lifting.

The quintet saved their best for last.

Seemingly involved in every play, the first-team, All-Catholic linebacker finished with 10 combined tackles (five of them for 23 yards of lost yardage) and four sacks.

Historically, Johnson’s contribution was fitting. The enthusiastic, likeable Princeton University signee is the last of four siblings to grace the Prep’s program since 2009. Paul (Class of 2013), Tom (2015), and James (2017) helped spearhead the past.

“I’m so proud to get to finish it off with a state title,” said Johnson. “To win a state title, you have to have trust and love. It’s what defines our program.”

Employing most of the same techniques – both tangible and intangible – the former Prep assistant head coach and his familiar staff guided the Prep through early struggles (the Hawks lost two of their first three contests against nationally recognized competition) before corralling Catholic, district, and state titles during an 11-game winning streak.

“It starts in January in the weight room,” said Roken. “This group was on a mission from the beginning. We had a coaching change in a way, but the feeling in that room was that nothing was going to change. We’ve been successful with the things that we talk about every day. It starts with trust and love.

“This group and the continuity of that staff was huge. It made it easier for me to be able to focus on more of the program and have coaches who have been in the program for six, seven years continue to deliver the messages that we do every day.

“As the year went on and we continued to believe, we became closer together. It didn’t matter the injuries. Didn’t matter where we played. We learned by our mistakes and found ways to get better every day.