WYNCOTE, PA - Will Chavis recalled the ease and temperament his Bishop McDevitt team played with a year ago. During a memorable season, one that could be argued as the most successful in school history, the Lancers, led by a core group of juniors in Robert Smith, Jamil Manigo, Shamir Mosley and Ahmir Harris, reached the Philadelphia Catholic League semifinals for the first time since 1989.

The season didn’t end there as Bishop McDevitt advanced to the PIAA Class 3A Tournament. They defeated PCL rival Neumann-Goretti, a team that had won five straight state titles, in the quarterfinals and advanced to the semifinals for the first time in program history. With the entire team returning except for forward Cameron Gardner, everything looked to be in place one final run to win a league crown.

So far, through the first portion of this season, there’s been anything but ease for these Lancers. They lost their PCL opener to Archbishop Wood, a team that advanced to the PIAA 5A title game, by three points. They suffered a 21-point loss to Our Savior Lutheran (N.Y.) in the All-City Classic. They played three games in Louisville in the King of the Bluegrass Holiday Classic against top tier talent. They stumbled to a 2-4 start and that ease they were playing with a year ago was not as evident.

Pulling out close games was a strength of the Lancers and the reigning PCL Coach of the Year feels like there’s a real struggle to execute at both ends.

“Last year, we did a pretty good job of doing it,” Chavis said. “We were in a lot of close games. I think we kind of regressed from that and now we’re fighting to come back.”

Chavis is hoping Friday night was a step in the right direction as his team pulled out a 42-39 victory over La Salle behind 14 points from Robert Smith and 13 from Manigo. It was the third straight game that the Lancers were able to hang on. After Glenn Smith, another member of Bishop McDevitt’s 2019 class who previously transferred in from Archbishop Ryan, hit two free throws to give the Lancers a three-point cushion, the Explorers still had an opportunity to tie the game with 1.8 seconds remaining.

Nix Varano, who had hit a triple to pull La Salle within one at the 1:52 mark of the fourth quarter, had a look but his heave from half-court was off the mark and corralled by Manigo (seven rebounds).

Varano’s final shot made the game even more nerve-racking after Shane Holland, who led the Explorers with 15 points and had hit the game-winning three-pointer to beat Abington in the Pete & Jameer Nelson Classic at Widener University only four days earlier, missed a windmill layup that would’ve given La Salle the lead. Instead, Glenn Smith got the rebound and sank two at the line. Jake Timby, the only returning starter from a La Salle team that had defeated Bishop McDevitt at the Palestra last year, added 14 points including four makes from deep.

Robert Smith scored 11 of his 14 points in the first half as he and Holland (10 of his 15 in the opening half) went back and forth. Robert Smith hit a floater in the lane then Holland answered with one of two acrobatic finishes to tie the game at 10-10. 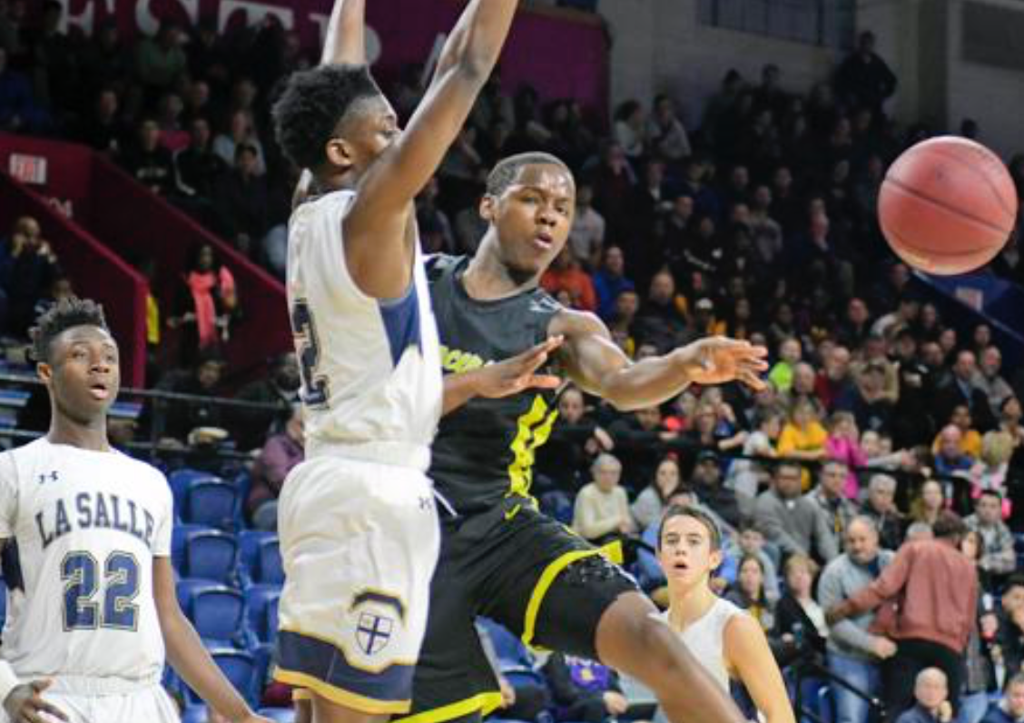 Robert Smith, who has made the All-Catholic team in each of his first two seasons with the Lancers after transferring in from Roman Catholic, knows that the Bishop McDevitt (5-4, 1-1 Philadelphia Catholic League) program is no longer an afterthought and teams are coming in more of an edge following last year’s success.

“We knew we were going to get hunted this year,” Robert said. “Last year, we did the hunting but now it’s going to take more hard work and heart to overcome the challenges. We have to fight every possession to win every game because teams know we’re being hunted this year.”

Manigo, who became the first Lancers player named First Team All-Catholic in five years last season, received a great feed from Mosley to put his team up by four. A few possessions later, he sealed his and took a quick dropstep for a basket to put the Lancers in front, 28-25 with 3:38 left in the third.

The 6-5 senior forward remembers the harsh message Chavis relayed to the team at the end of the season and through the early part of this one.

“After the season, Coach Will said we didn’t win anything,” Manigo said. “He didn’t care about what happened last year. We’re going for it all. We want that championship and that’s all that matters.”

The message Chavis was trying to convey was the Lancers had not been in this position, especially not with this group, and they need to remain humble if they want to get back into the same place they were last year. The win over the Explorers (7-5, 0-4) was the third straight where Bishop McDevitt had to hold off the opponent until the final buzzer. In two games at the Pete & Jameer Nelson Classic last weekend, they saw two, last-second chances at the rim from Cheltenham fail to find the bottom of the net then Germantown Academy missed a potential game-tying trey two days later.

It hasn’t been an easy start to a season full of optimism and increased expectations but Chavis thinks the win over La Salle was wake-up call and he’s hoping it catapults the Lancers back on the path to where they want to be.

“Of course, in their senior year, they want to prove everything and I think we’ve come out trying too hard instead of just playing the game,” Chavis said. “This game was hopefully a turning point and we can continue moving forward.”