FORT WASHINGTON, PA — Life is all about balance.

The junior guard came into Tuesday’s Inter-Ac opener averaging better than 26 points per game, but Longino is by no means a man on an island. As the Patriots showed in the 59-49 win over visiting Episcopal Academy, they can beat you in many ways, with Longino merely being one of them.

It was a stark contrast for the Churchmen, who got 20 of their 49 points from senior guard Alex Capitano. Guards Colin Chambers and Sam Malloy each tallied seven in a game that GA (8-5, 1-0) led by 11 at halftime and double digits for most of the second half, save for a brief moment late in the fourth when Episcopal (6-10, 0-1) cut the deficit to seven.

“Balance on offense is something we’ve been trying to work on all season,” Longino said. “Everyone on this team can shoot and score. We have chemistry and we can all move the ball, something that Coach (Matt) Dolan stresses in practice. That’s where it starts, and today it translated in the game.”

On a day where all six Inter-Ac teams finally got a look at each other in games that really meant something, GA’s depth and unselfishness shone through. Despite averaging double his output from his first 10 games of the season, Longino never once forced the issue. If the shot was there, he took it; if it wasn’t, he had a handful of helping hands, as evidenced by his five assists.

As a team, the Patriots shot better than 56 percent (22-for-39). With Episcopal struggling to generate consistent offense beyond Capitano, the Churchmen faced an uphill climb throughout the game.

“Their guys really stepped up, with some of their role players having great games,” Episcopal head coach Brian Shanahan said. “They played with confidence. We struggled and relied on jump shots that didn’t go in. We had a tough second quarter where we got down 11, and when you get down early in this league it’s hard to claw your way back. Our kids, they play hard, we just didn’t make enough shots to compete.”

As Shanahan noted, to win games consistently in the Inter-Ac, teams must bring the energy for 32 minutes. The Patriots did so on Tuesday, while their opponent only matched half of that.

“I’m proud of the second half effort, which was very good” Shanahan said. “We have a great group of guys, just didn’t do a good enough job getting them ready to compete today. In the Inter-Ac, it becomes a question of who can win on the road, and we let this one slip.”

Longino drew the unenviable assignment of having to defend Capitano, and while the Episcopal senior scored more points than anyone in the game, he had to work for all of it, something Longino made sure of.

“Alex is the core of their offense, and we knew he shoots the ball at a high percentage,” Longino said. “Today my job was to do my best to stop No. 22 on their team, and while doing that I just wanted to share the ball on offense, get my teammates involved, play defense, get rebounds…just do the intangible things to help us win.”

Of course, one win won’t crown the Patriots league champions. There’s much work left to be done, and Shanahan acknowledged that he expected every game that every team plays to be “a dogfight.” 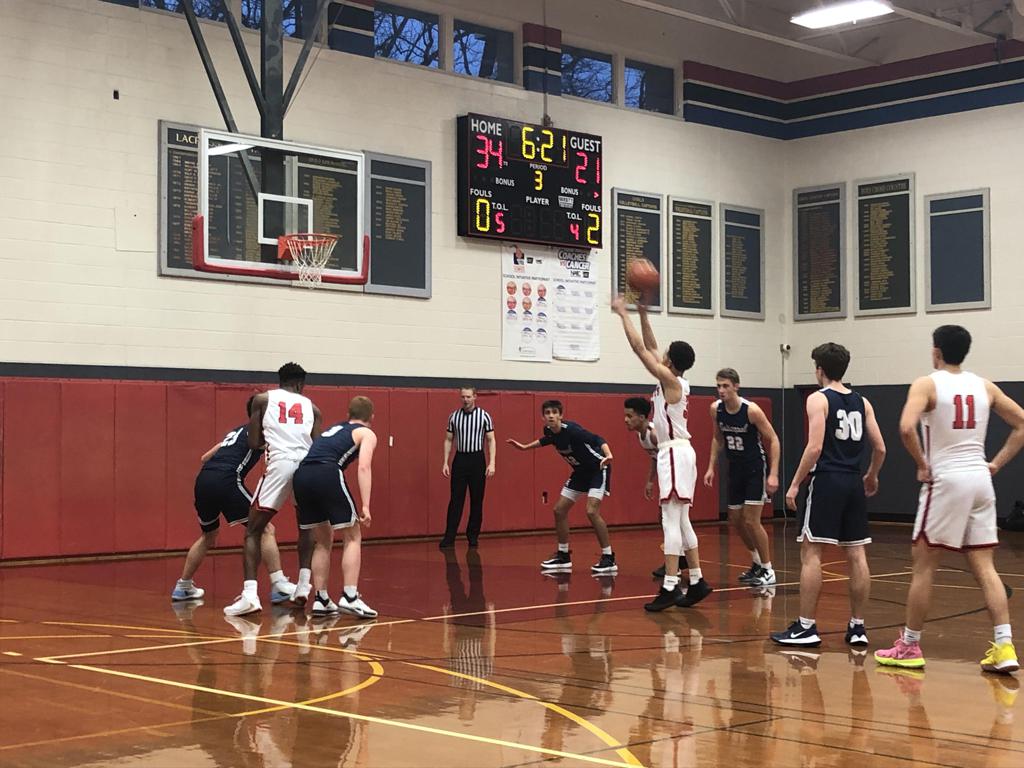 However, it was about as good a start as GA could have expected. The Patriots shot and passed the ball well, played stingy defense, and, most importantly, put the rest of the league on notice that even on Longino’s quieter nights, this is a team capable of doing damage.

“It’s not easy to get wins in the Inter-Ac,” Longino said. “These are going to be 10 tough, good games, so it was good to get the first win under our belts. We’ve just got to stay together. This is a brotherhood here at GA. We just have to stay together, keep working hard and listening to Coach Dolan. If we can do that, then we believe we have what it takes to go out and try to win the Inter-Ac.”