COLLEGE: Daly Has a Day in the Hawk’s Big 5 Victory vs. Penn

PHILADELPHIA — Ryan Daly had had enough.

The Saint Joseph’s University star guard had just watched a 16-point lead evaporate into a 61-60 Penn advantage in Saturday’s Big 5 contest at the Palestra, so it was time for him to take over. After all, the Hawks had lost five straight and 12 of 13 in a season that had seen them drop to 3-14 overall.

With a possible victory on the horizon, Daly was going to do what great players often do: take the game over and leave zero doubt in the result. 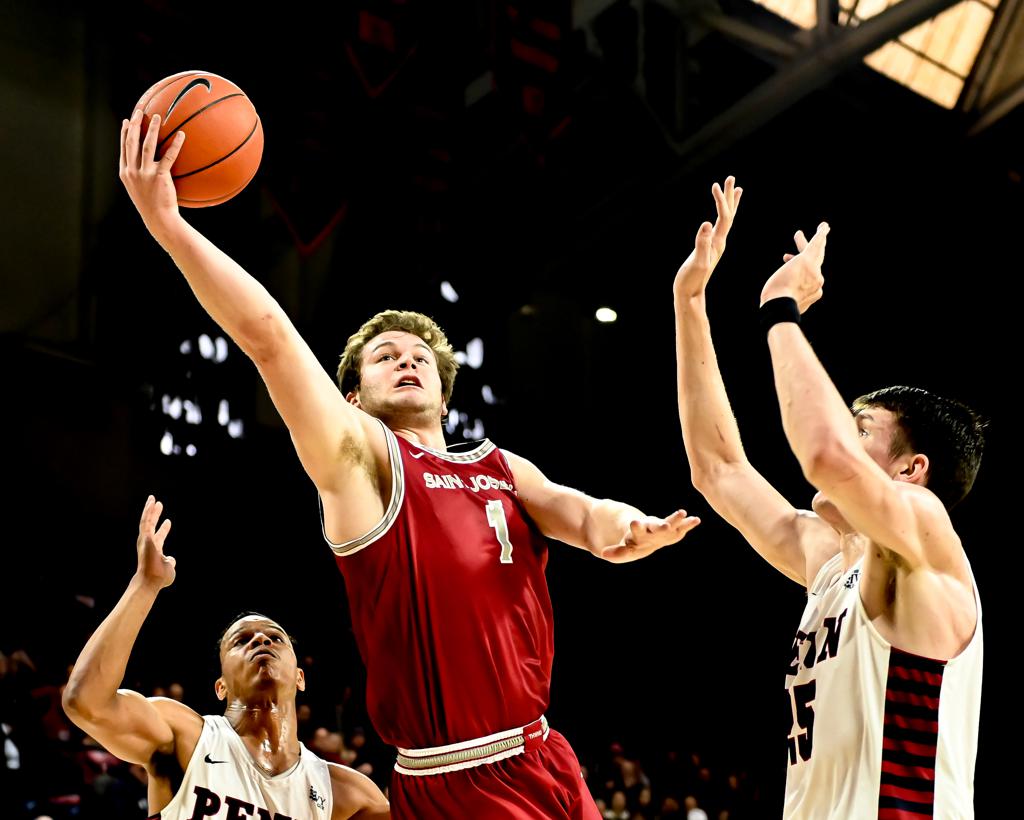 “I look forward to taking those big shots more than anyone,” said Daly, who also added nine rebounds and six assists. “I’m competitive, sometimes to a fault, but I know in those moments we don’t have the most experienced team. We needed someone to take those shots, and you can’t make the big ones if you aren’t willing to take them. I was just trying to help my team out in any way that I could.”

In his personal 11-point run that ultimately decided the game, Daly, an Archbishop Carroll alum, scored on four layups and a three-pointer. He shot 7-for-12 in the second half, and even though the Hawks had to hold on for dear life as the Quakers mounted a furious rally, the result was all that mattered on this day.

“It was my first Big 5 game at the Palestra,” Daly said. “I played in the (Catholic League) semifinals here three times in high school and unfortunately never got a win. My first scholarship offer came from Penn. It was great to be back here playing again helping our team get a huge win. We’ve been playing well recently, and this win was good for us to realize we’re getting closer to where we want to be.”

Penn featured its own one-man wrecking crew on Saturday in AJ Brodeur. The senior forward torched the Hawks for 33 points on 14-for-22 shooting, but even despite his dominance, St. Joe’s held a lead throughout much of the contest.

It helped that they had Daly, now averaging 20.1 points, 8.0 rebounds and 4.4 assists on the season, who refused to let the Hawks lose another close decision.

“He’s our leading scorer, rebounder and assists guy,” first-year head coach Billy Lange said. “That’s the answer to how important he is. How we coach him is how we can help him. That’s one of the best-prepared teams in the country, they’ll be prepared for Ryan Daly, so how do we help him create offense?

“He got some offensive rebounds and there were fortuitous bounces for him, but I felt our team moved the ball and he was the recipient of the pace and space of the offense. No one is out here saying Ryan has to do it all; he just took advantage of what the guys gave him.”

As far as most important players on Big 5 teams go, the Saint Joe’s-Penn matchup featured the top two in that capacity. Villanova, La Salle and Temple all have winning records as teams, but Penn (7-7) and the Hawks (4-14) might be even worse for wear if not for the Herculean efforts of Brodeur and Daly throughout their respective seasons.

“Probably not,” Penn head coach Steve Donahue said when asked if any of the other Big 5 squads had individual players on their rosters that were more vital to their teams’ success. “We’ve relied on AJ so much in four years, and Saint Joe’s and Billy are building a program around a veteran who really helps them. Ryan is extremely important to their team, just a terrific basketball player. The way he competes is relentless. He and AJ are similar in that both teams need those two to play well in order to win.”

Of course, Daly had some help in helping to secure this win, most notably from freshman Cameron Brown. Brown, who had shot 0-for-9 from three-point land in the team’s previous game, a loss to Rhode Island, buried his first three treys of the game against Penn. He shot 6-for-10 overall and 5-for-7 from deep for 17 points, his confidence never wavering despite a forgettable performance a few days earlier. 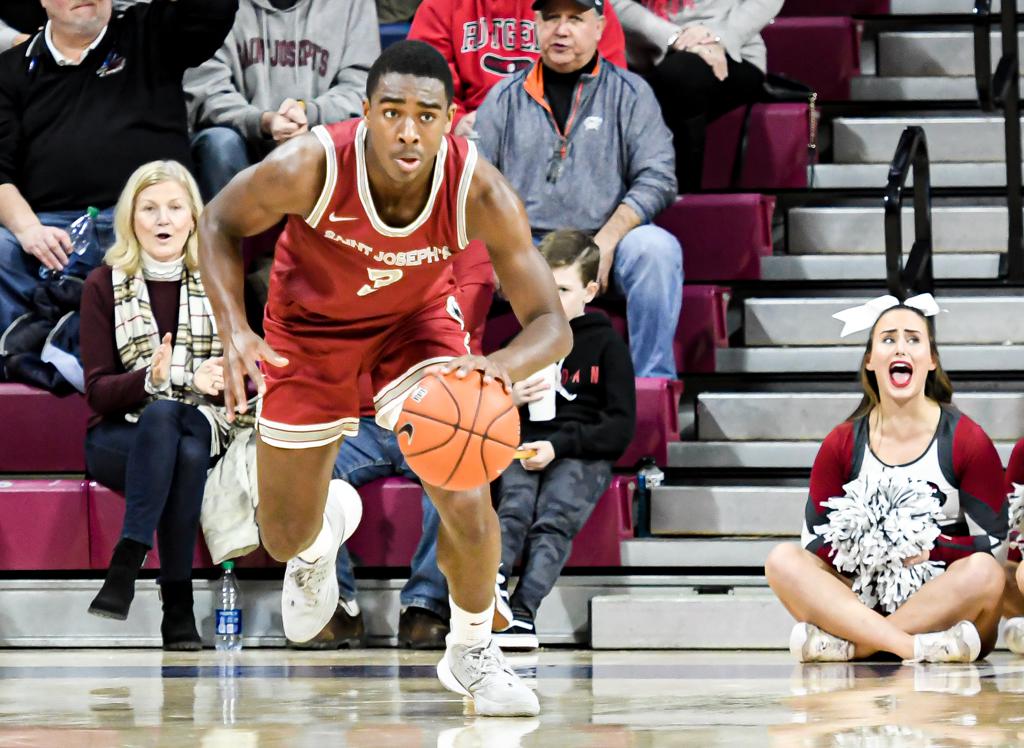 “I never lack confidence,” Brown said. “The coaches and my teammates always tell me to keep shooting it when I’m open. I didn’t make them the last game, but I know that I put the work in and that they would go in eventually. Just listening to the coaches and upperclassmen, paying attention to the details and getting some experience under my belt has really helped me as a freshman. Just being in the game, really.”

Lange was impressed with the fact that the morning after a night game in which he shot so poorly, Brown was right back in the gym working on his stroke. On a recovery day for the Hawk players, Brown refused to take a day off, something Lange said indicated his team was tired of losing and wanted to do something about it.

It’s just one game, sure; after all, the Hawks are still 4-14 overall and 0-5 in Atlantic 10 play, so nobody is claiming that one win magically cures everything that has plagued Saint Joseph’s all season. At the same time, the team has continued to work despite not getting the results it seeks, and Saturday’s effort was a validation of that process.

It didn’t hurt that the Hawks had Daly, too.

“They made a little comeback on us on their home court,” Daly said. “I knew I couldn’t let it get from a one-point deficit up to five or six. I took it upon myself to make some plays, and luckily I made a few in a row. We did a great job as a team making shots and playing defense after they made a run. It was huge for us to get the win.”