PHILADELPHIA – It all came down to the final bout.

With his team leading by only two points and the Catholic League championship on the line, Brenden Spicer engineered the most clutch victory of his life. The senior’s triumph in the 182-pound event – the final battle of the evening – secured Father Judge’s 36-28 win over a crestfallen Archbishop Ryan, which hosted the jam-packed event.

The championship on Jan. 28 was Judge’s second straight, fourth in the past five seasons, and fifth in past seven under coach Jim Savage. Still seeking their first-ever league title, the Raiders dropped their third consecutive final. The Blue Division regular-season champs had defeated Judge, 48-33, precisely three weeks earlier.

"It was a great feeling to bring home another championship this year,” said Spicer. “We really had to fight hard for it and that’s what made it so great.

“For my own victory, I just went out knowing I had a job to get done. For sure, the pressure was definitely high knowing you have to go out and get the win, but I knew what had to be done and I was confident I could do that. It was definitely a memorable experience.”

In a back-and-forth affair, the Crusaders erased a 28-23 deficit by seizing the final three duels behind senior Matt Kidwell’s major decision at 160, senior Danny Wildonger’s decision at 170, and Spicer’s pin that took three minutes, 43 seconds at 182. 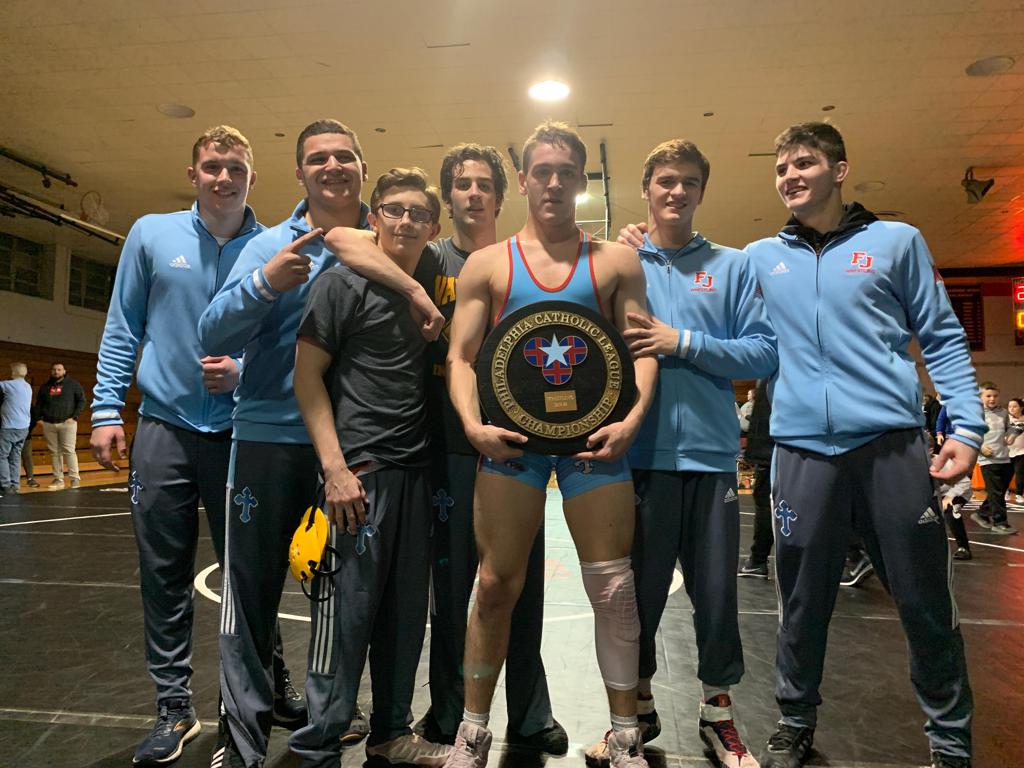 Having endured his own share of difficult healthy challenges, Wildonger appreciated the meaning arguably more than most.

“This team is very special,” said Wildonger, who lost most of his sophomore and junior years to a torn labrum that required successive surgeries. “Those guys are my brothers. We knew that if we wanted to win, we had to fight harder than we had the whole season.”

In the semifinal six nights earlier, the Crusaders had upended Red Division champ St. Joseph’s Prep, 39-25, in the league semifinals, while Ryan had dispatched La Salle, 54-15.

“After the win over St. Joe’s Prep, I knew we were good enough to win it all,” said Wildonger. “That match showed a lot of key improvements.”

Junior Jose Lage, who notched a decision at 220, lauded the coaching staff.

“Our win against Ryan couldn’t have been possible if it weren’t for how hard our guys fought and what it really meant for them to be PCL champs,” said Lage. “Also, we wouldn’t be the team we are if it weren’t for the way our coaches push us to be better and learn from our mistakes and how they change the true meaning of wrestling.”

The Logue brothers, Eamonn and Sean, offered different points of view since Eamonn’s scholastic career is coming to a close while Sean’s still has two years remaining.

“It felt great to win it as a senior, and this year was definitely the most special of them all,” said Eamonn. “Not only was the crowd electrifying, but also it was a very close match, which made it exciting.

“Personally, I really tried to take it all in and enjoy the moment, as it would be my last PCL finals’ appearance. The crowd, the rivalry, the team effort . . . it was everything amazing about high school sports.”

Sean Logue was confident that Spicer would get the job done. He also recognized how difficult – and rare – it was for a team to win a championship against an opponent it had lost to earlier in the season.

“The team really had faith in Spicer, so everybody was watching with a lot of excitement,” he said. “We all knew how hard he worked, and we had good faith that he could clinch the match.

“It was pretty crazy, because last year when we won it, we were so much more confident after winning during the season against them. But this year, having lost to them, it felt like much harder of an obstacle. But then everyone on the team did their job, and that was the only way we won. It really was a team effort.”

On Jan. 30, the Crusaders captured the District 12 title with a 39-27 win over Central. They will face Dallastown High School in the first round of the PIAA Class 3A tournament on Feb. 6. The Raiders also qualified for states by upending both Northeast (72-0) and Central (58-15) and on Feb. 3 take on Garnet Valley.