FORT WASHINGTON — Since the turn of the century, Germantown Academy has won the league girls basketball title every year but two. Save for 2013-14 and 2014-15, when the championship was won by Episcopal, the Patriots have ended every season with an Inter-Ac crown, a remarkable run of consistency and dominance.

That being said, winning championships never gets old out in Fort Washington, and the fifth consecutive Inter-Ac title that was clinched in Friday’s 65-33 victory over Agnes Irwin tasted especially sweet for GA seniors Caitlyn Priore and Elle Stauffer. Not only because it was their fourth championship in four years, even if that fact doesn’t hurt; but rather, the duo each took roundabout ways to get to this point and are grateful for every bit of success that comes their way.

Priore missed all of her junior season after tearing her ACL in a summer league game. She faced a lengthy road back to return as a senior, and Priore still wears a bulky brace to help stabilize the knee. She missed some time earlier this season, but has been healthy for most of the league slate and has carved out a role of being one of the team’s smartest defenders and best rebounders. Despite her junior year being completely wiped out, Priore is heading to Gettysburg College in the fall to continue her basketball career.

Stauffer, meanwhile, has taken the inverse road.  She was healthy as a junior, but her senior season has been marred by injuries. Earlier this year, it was Achilles tendinitis that forced Stauffer from the lineup, only to hurt her knee in her first game back last month. The knee injury ended her senior season, and although it was devastating for Stauffer to miss so much time, she has still been at every practice and game serving as de facto coach and cheerleader on the bench. Stauffer is committed to play her college ball at Harvard.

The two players, who are also really close friends off the court, appreciated this title perhaps more than the three that came before it just because of all the adversity they’ve had to face, health wise.

“Not playing last year was really hard but being able to be on the bench to support everyone was something I enjoyed doing,” said Priore, who didn’t score against Agnes Irwin but hustled for nine rebounds.

“Now that I’m finally able to play and play an important role, it feels good to be a part of keeping up these winning ways again.”

“It has been frustrating this year, being so in and out and missing games,” Stauffer added. “I know I won’t get to play the rest of my senior season, but I still want to be there for the team. I have full faith that they can accomplish anything that they would have if I was there. We’re going to have a great end to our season.

“As for Caitlyn, I hate to see anyone go down with an ACL, and I was on the team she was playing against that summer when she tore it. She’s one of my best friends, so I’m so happy to see her out there playing a role in her senior season. She deserves it.”

“We’re friends on and off the court,” Priore added. “We’re always together in school, so it was hard to see her go down at such an important time during senior year. But she’s always there for us being the loudest one on the bench. It’s almost like she’s still with us on the court even though she’s not.”

The Patriots’ depth was on full display against Agnes Irwin, as GA pitched a first quarter shutout and led 23-0 after the first eight minutes. Junior Jessica Moore led the way with 17 points, while senior guards Maddie Vizza and Jaye Haynes chipped in with 16 and 12, respectively.

Now, the team will turn its attention to the upcoming PAISAA Tournament, hoping to win one more championship before this four-for-four senior class moves on to their collegiate careers. The Patriots, the top seed in the 12-team field, will host either No. 8 Episcopal or No. 9 Hill School on Saturday at 2 p.m. 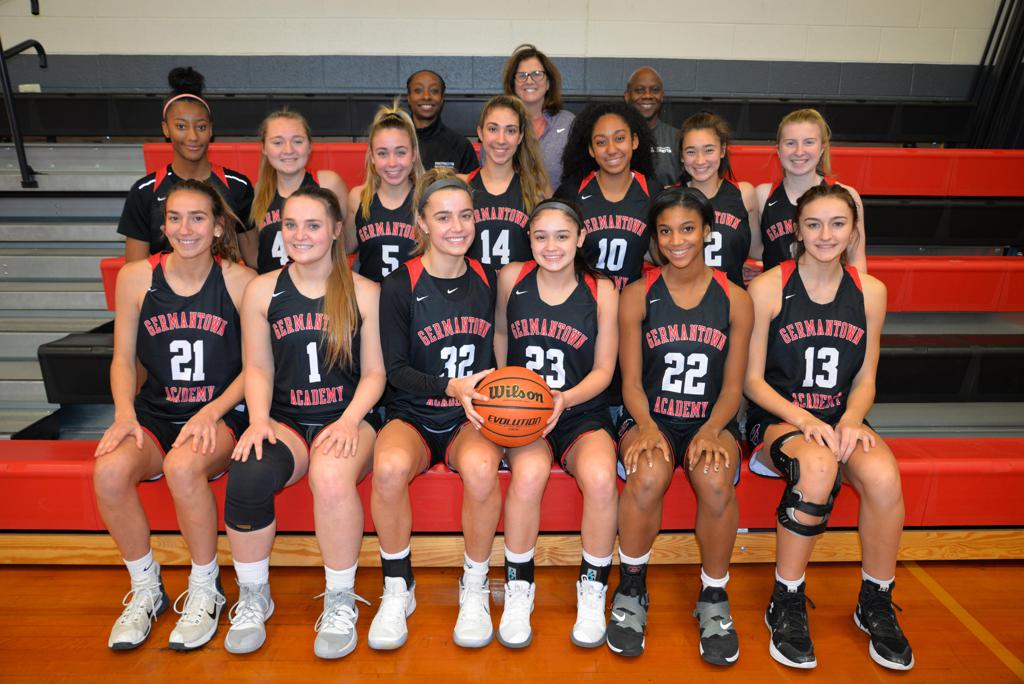 “It’s so important,” Stauffer said. “We didn’t win PAISAA our freshman and sophomore seasons, so we want to fulfill our goals to get one more championship. So many teams were out to get us this year, so to have that second title to look back on is very important for us.”

“It’s definitely something that we really want,” she said. “We’re a really close team, especially this senior class. We’ve built a lot of chemistry the last couple of years that have carried through our seasons. We’re going to work really hard in practice this week to maintain that and finish strong with a win.”

Before heading to the state playoffs, the Patriots have one more league game to play tomorrow against Springside Chestnut Hill Academy.