Brown Becomes Second Player as a Junior to Surpass 1000 Points and She is not Done Yet.

BRYN MAWR--Anajah Brown just became one of the select few players to surpass the 1,000-point threshold at the Baldwin School, and only the second to hit the feat as a junior.

Now with her junior campaign over, Brown wants more. A lot more.

“I’m definitely proud of how much I’ve grown as a player and teammate,” Brown said following Baldwin’s season-ending loss in the PAISAA quarterfinals to Penn Charter on Saturday afternoon. “Honestly, my goal next year is to break the school’s all-time scoring record. This milestone is just the first of many, I hope.”

A 6-foot-1 forward/center, Brown is already one of the most dominant frontcourt players in the Inter-Ac. Against Penn Charter, she scored 15 of her team’s 28 points and added 11 rebounds and three blocked shots. The day before against Friends Central, Brown erupted for 29 points and 13 rebounds in the team’s 55-41 win.

Not only that, but her emergence has led to an improved on-court product for Baldwin. The Bears won 11 games overall this season and posted a 4-8 mark in Inter-Ac play, in large part due to the Brown-Taylor Levinson-Kaya Weiser triumvirate that will all be back as upperclassmen next season.

Brown began her varsity quest as an eighth grader, and although the transition was difficult at the outset, she refused to show opponents that she was scared or intimidated by the stage. 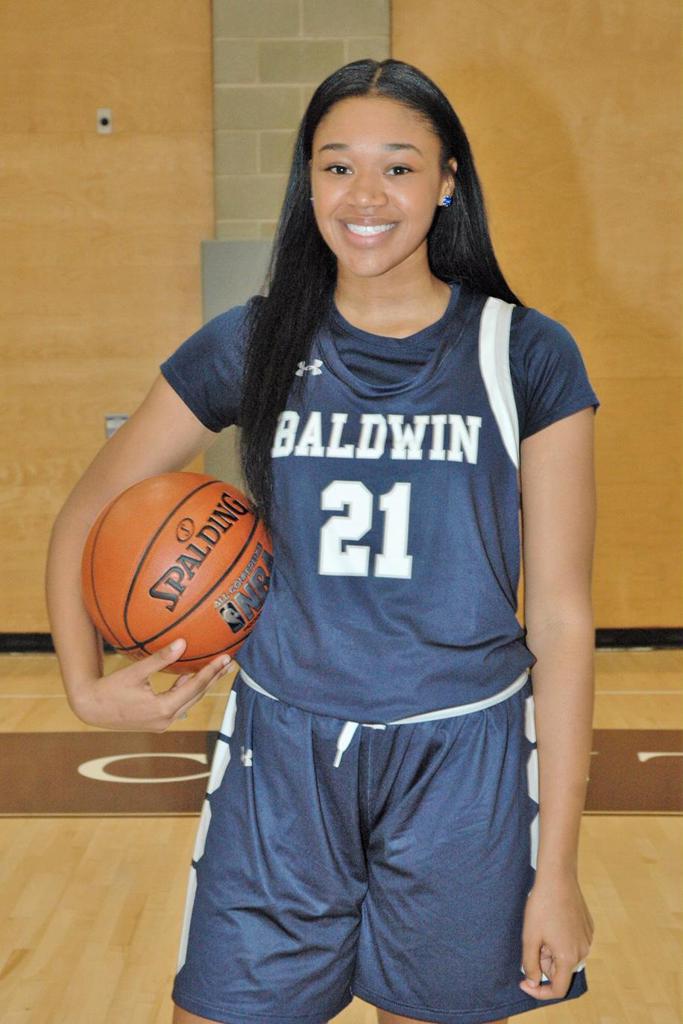 “It was hard, going from a public school to such an academically-rigorous school,” the Norristown native said. “On the court, being a middle schooler going against seniors committed to Division I colleges was a tough transition too. But I knew I couldn’t back down. At the end of the day, I love the sport too much to let anyone run over me.”

Brown’s biggest strengths lie in her high-low game. She excels at finishing around the rim and has taken on a more expanded offensive role, and it’s no surprise to see her setting screens in the high post and either taking the ball hard to the hole for a layup or pulling up for a mid-range jump shot. She’s also infinitely improved as a passer, being able to spot her teammates for an open look from three when the defense collapses on Brown with double and triple teams.

“I just try to use my size to an advantage,” she said. “Before I was never really a big offensive threat, but I’ve tried to take on a role to score more. It was my top goal this past summer and offseason.”

Brown is also proud of the strides the program made as a unit, becoming a much more competitive foe than in years past. Gone are the days where Inter-Ac opponents can look past Baldwin or count the game as a win just by showing up.

Brown is a big, big reason why that is the case.

“Compared to last year and years before, I think this is the best team Baldwin has had,” she said. “We made a name for ourselves after always being viewed as a team that wasn’t a threat. This year, we kind of got teams to become more aware of who we are and I think they see us a little differently than they did in the past.”

John Bernhardt is in his second year as Baldwin’s head coach and having such a dominant player has made his transition into the main role much easier. It wasn’t perfect, and Baldwin still has a way to go, but there was measureable progress this season, and the best part of it all remains the fact that Bernhardt will bring back his entire roster but one player in 2020-21.

“She’s been unbelievable as a leader on the floor for us, and the big thing is she makes everyone around her better,” Bernhardt said. “She single-handedly took over games for us, not just from an offensive standpoint but defensively as well. This year, you look at our record and see 11-13, but there were at least five games that could have gone either way. Anajah has been an anchor, just super steady for us, and is a huge reason why we’ve enjoyed the success we’ve been able to have.” 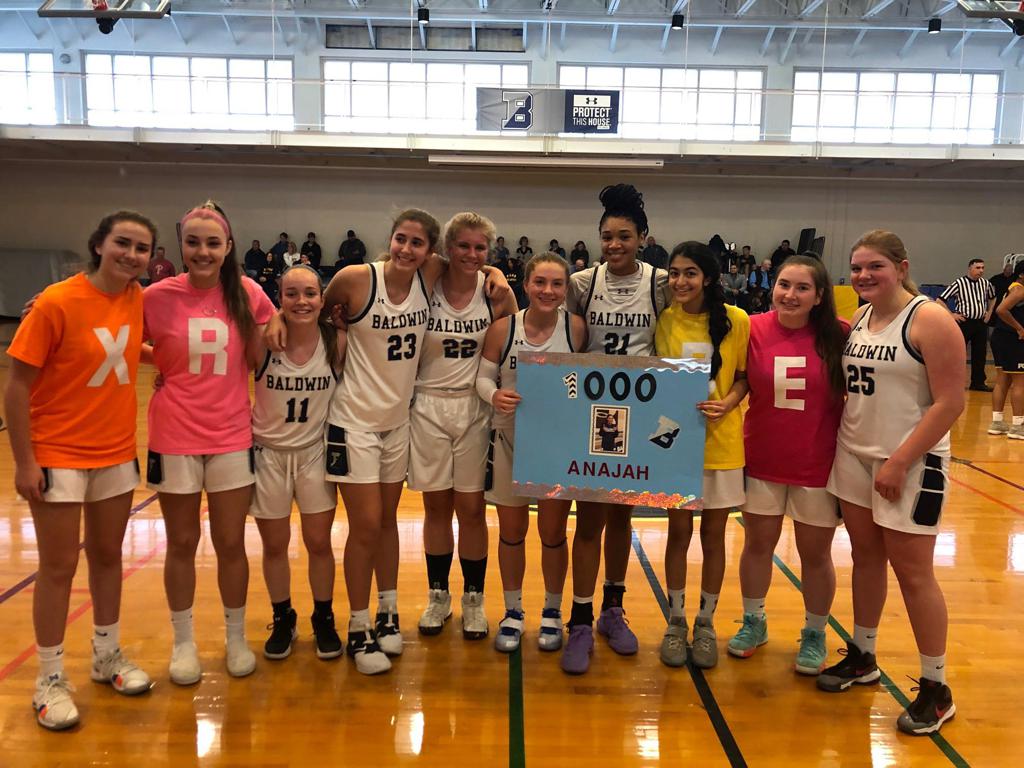 This season just ended, but Brown can’t wait to get started on preparation for her senior year. As far as she’s concerned, the work begins immediately. Brown will head right into AAU season as a member of the New Jersey Sparks, and plans on improving her ball handling, jump shot and basketball IQ in general.

She hopes her hard work and commitment yields a Division I scholarship offer, and Bernhardt said she certainly has the size and skill to make that dream a reality. With Brown leading a talented returning core next season, the sky is the limit for the Baldwin program. 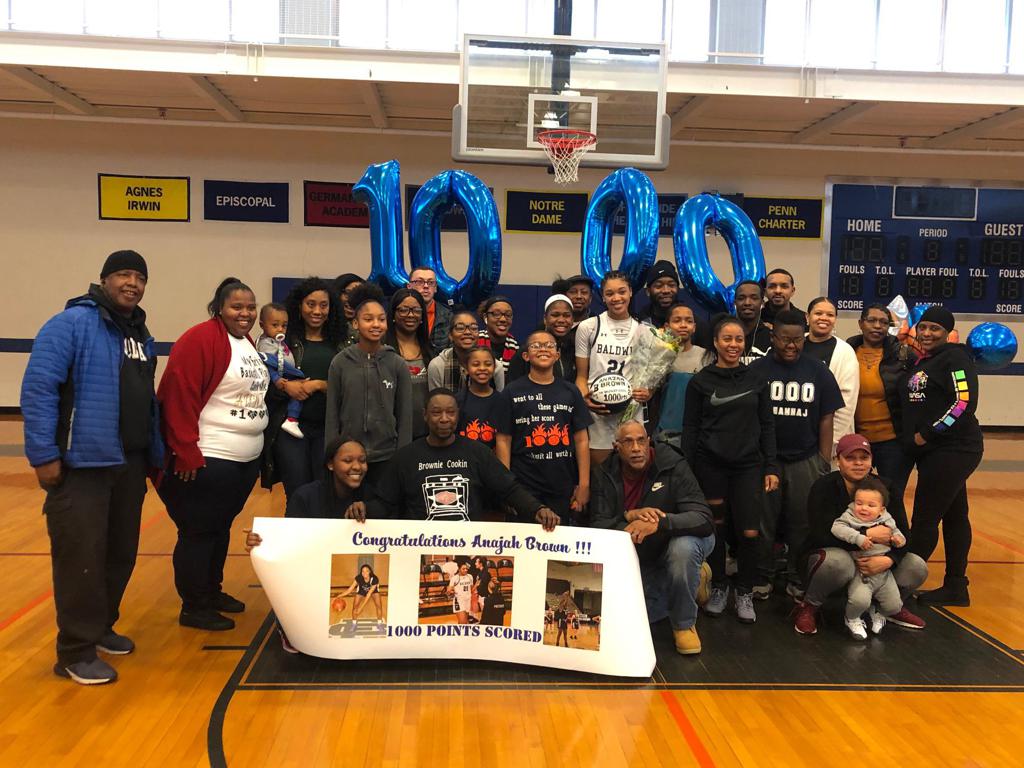 “There’s no off-season for me,” Brown said. “I’m always going. One of my main goals is to play Division I basketball, but first I just want to finish my high school career being proud of what I’ve done and what my team has done. If I can do that, then I feel great and confident about taking that step to the next level.”