PHILADELPHIA- Robert Jackson remembers the elation and euphoria after what was the ultimate ending to a memorable season for him and his Archbishop Wood teammates. Quarterback Max Keller found Cardel Pigford in the end zone with four seconds remaining to clinch the PIAA Class 5A state title over Cheltenham and the celebration was on. The win secured the Vikings sixth state crown since 2011 and Jackson was instrumental in that.

On Monday, Jackson and the rest of the Philadelphia Catholic League found out that there would be no fall sports season. The Archdiocese of Philadelphia announced that they had canceled all fall athletics, thus not allowing Archbishop Wood to defend its state title. Last year was Jackson’s first on the gridiron and he blossomed into one of the premiere pass rushers in the state. The 6-foot-6 defensive end was named First Team All-Catholic Red Division after recording 48 tackles, 10.5 tackles for loss, seven sacks and two forced fumbles as a junior.

Jackson, who holds offers from Arizona State, Indiana, Pittsburgh, Rutgers, Iowa State and Virginia Tech, among others, was primed for a sensational senior season but now he’ll have to wait on the sideline until his first season of college, potentially.

“Honestly, it hurts to not be able to go back and defend the title, especially with the season that we had,” Jackson said. “With whom we had coming back, I thought we had a really good shot to repeat and it’s just really difficult. There’s nothing we can do about at this point.” 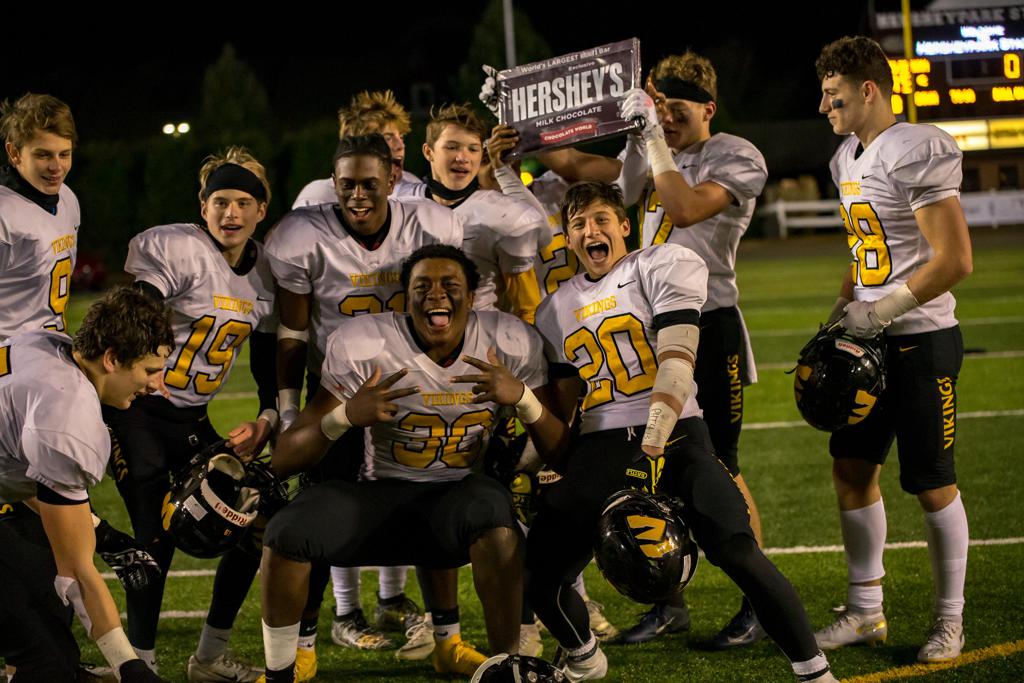 The Archdiocese of Philadelphia chose to follow in the footsteps of fellow District 12 member, the Philadelphia Public League, which suspended all interscholastic athletic competition until January 1, 2021, and that means there will be no athletics played within the city of Philadelphia until next year. Still, the Philadelphia Catholic League is hoping that fall sports can be moved to the spring and that is the direction they’re going to move forward with.

“As we continue to live in a time of uncertainty, it would be imprudent to speculate regarding an exact time when competitions will resume or regarding the status of spring semester athletics,” the Archdiocese of Philadelphia stated in its release.

The Pennsylvania Interscholastic Athletic Association (PIAA) voted last week to move forward with the fall sports season beginning on Monday. With the decision to start fall sports, the PIAA left it up to each entity or league to decide if they wanted to participate in athletics and which sports, they would sponsor. Additionally, they passed a motion to allow schools and leagues to explore options in the spring and the Archdiocese of Philadelphia felt that was the best plan for its league members, which also includes Bishop Shanahan (Ches-Mont League) and Pope John Paul II (Pioneer Athletic Conference).

Archbishop Wood is not the only team that will not receive the opportunity to defend a state title. St. Joe’s Prep, the two-time defending Class 6A champion, is returning a multitude of talented players including Ohio State commits in QB Kyle McCord and wide receiver Marvin Harrison Jr. and Clemson commit Jeremiah Trotter Jr. and they may not receive their shot to add to an already accomplished career.

The Hawks are also the defending Philadelphia Catholic League Red Division champions while Neumann Goretti took home the Blue Division crown. The Saints were led by Tysheem Johnson, the 5-10 running back who racked up 1,971 scrimmage yards (1,434 rushing, 537 receiving) and 27 total TDs during his junior season. He holds offers from Alabama, LSU, Ole Miss, Ohio State, Florida, Penn State and Michigan, to name a few. He may have scored the final touchdown of his high-school career. 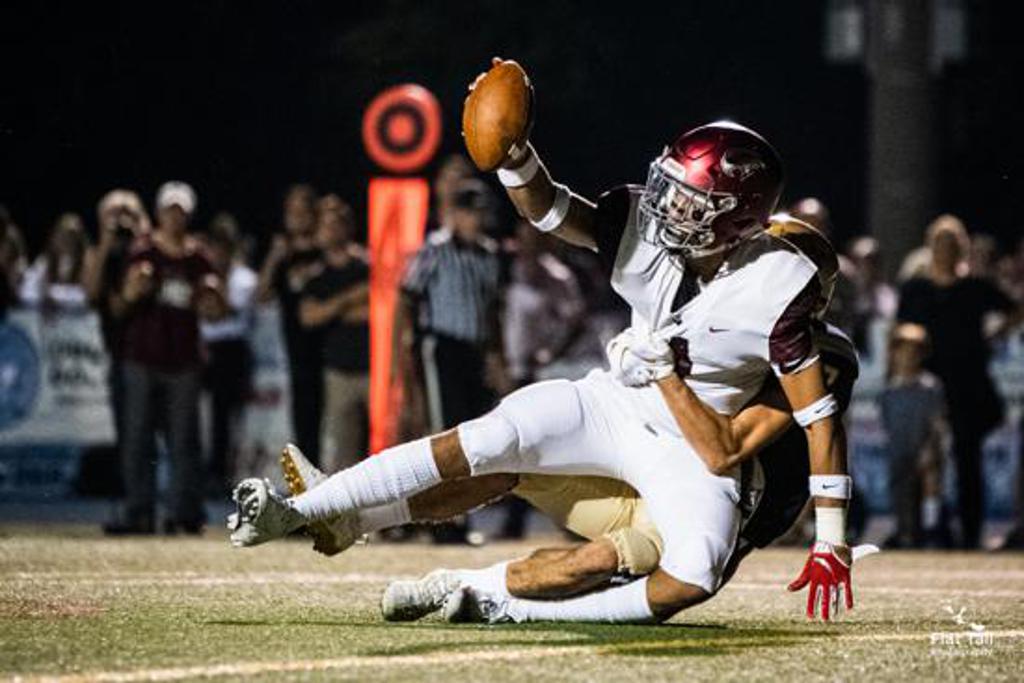 Head coach Mike Watkins and Bishop McDevitt are coming off a 7-7 (3-4 Philadelphia Catholic League) season, which consisted of a District 12 Class 2A title and a run to the state quarterfinals. The Royals Lancers lost QB Lonnie Rice (Buffalo), who broke the school record for career scrimmage yards, completions and touchdowns, but they were expected to be one of the deeper teams in the league. Senior wideout Joachim McElroy, a three-year captain and First Team All-Catholic Blue Division Multi-Purpose Player, had 344 receiving yards and three touchdowns last season, while linebacker KJ Henderson, a Second Team All-Catholic selection, had 75 tackle (10.5 for loss) and two sacks.

Watkins, who is also the school’s athletic director, was one of the first people receiving the information passed down the archdiocese then he had to share the news directly with his team. He understands the frustration this decision has brought to his players but was proud of how his group has responded.

“We have a tough-minded group,” Watkins said. “We only graduated six seniors from last year, so we bring back a very experienced roster. These guys have gone through a lot. We had to play a lot of freshmen, so these guys were playing meaningful reps and growing up quickly. We learned a lot from last year’s run in the state tournament and I’m excited to have this group because I know they’re going to lead from within. They’re going to find a positive in this.” 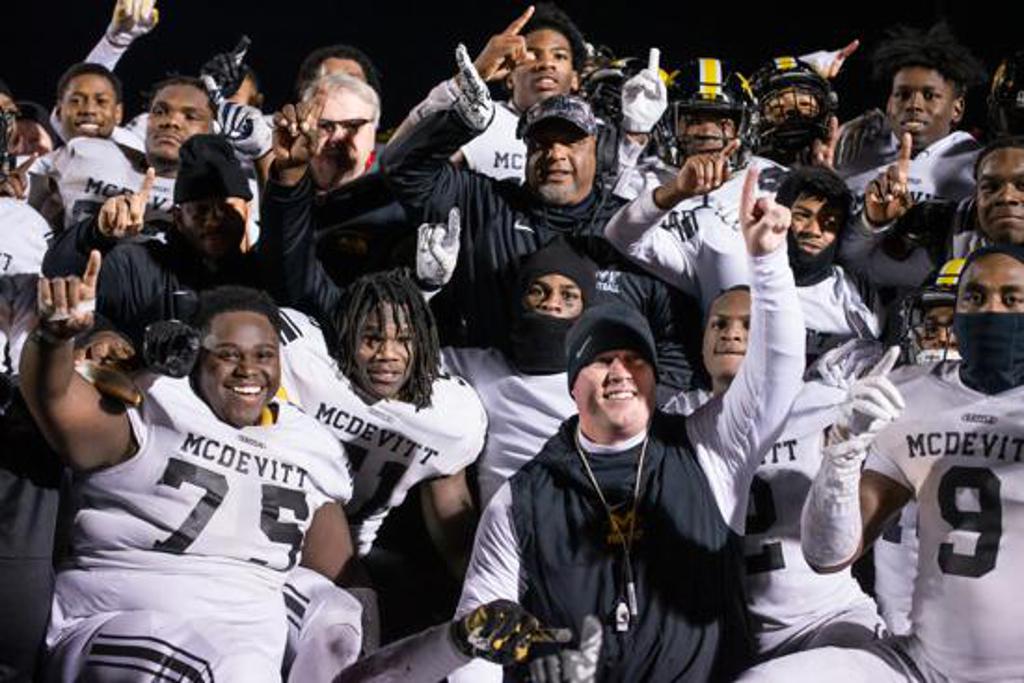 The Lancers program has taken major steps forward under Watkins and while the gaze is currently on the lack of sports this fall, it will soon turn to the spring.

“Of course, everybody is upset but we’re going to take that out on the weight room and in workouts through the spring,” Watkins stressed.

Much like the Vikings, Cardinal O’Hara’s field hockey team won a title in dramatic fashion. The Lions downed Archbishop Carroll, 3-2 in overtime in the Philadelphia Catholic League title game, their first since 2016. They went on to claim the District 12 3A title and were set to return a plethora of standouts from a year ago including First Team All-Catholic goaltender Gianna Travia and sophomore Mia Scarduzio, who scored two goals including the game winner with 12:54 remaining in OT to defeat the Patriots. Additional players like sophomore midfielder Maeve Boston, who was a Second Team All-Catholic and scored a goal in the semifinal win over Lansdale Catholic, and senior defender Emma Shallow, a Catholic University commit, had the Lions in position to bring home a second straight league title. 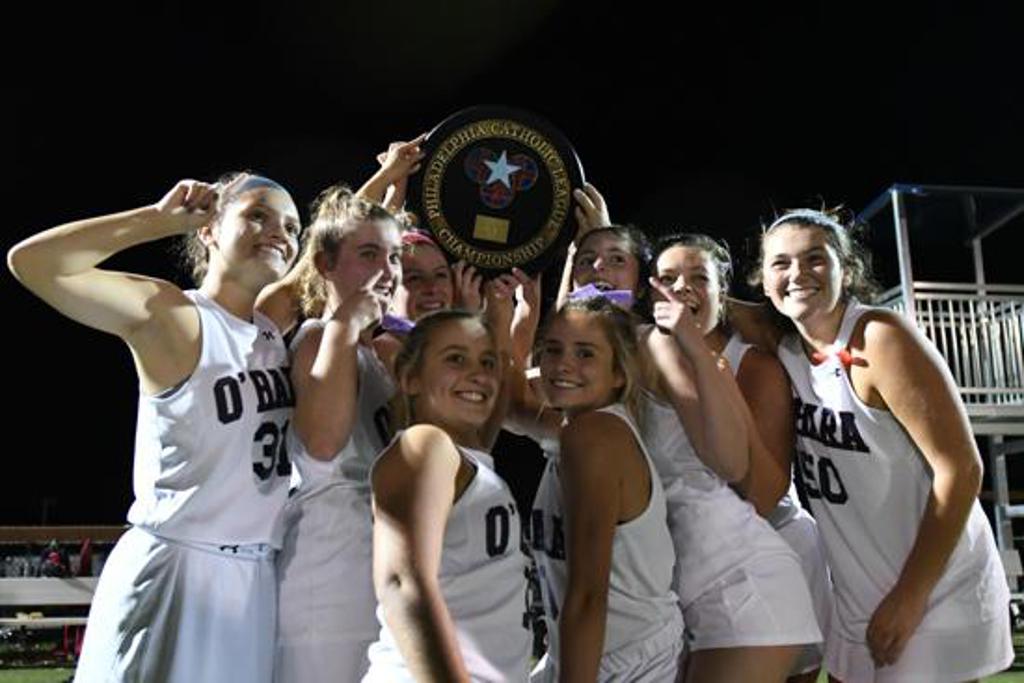 Head coach Jenna Spaeder, who oversaw a title-winning program in her first year at the helm, remains confident that the Archdiocese of Philadelphia can make this work in the spring season.

“As coaches and as parents, you want to be able to see your seniors play their final season, but at this point we’re not going to think anything negative and we believe we’re going to play in the spring,” Spaeder said. “I’m going to keep hoping for that.”

Spaeder, who played at Cardinal O’Hara and spent two years as an assistant before taking over, knows this process has been difficult for her players but recognizes the fluidity of the situation.

“It’s difficult for them to go back and forth with the way it did but it’s even more difficult for anybody to make decisions with the coronavirus because things change so quickly with it,” Spaeder said.

Coach Cherie Walters can still recount what happened in March when she led the Cardinal O’Hara swimming team to the PIAA Class 2A Championships at Bucknell University. After losing the Philadelphia Catholic League title to Archbishop Ryan by a mere three points, Walters and the Lions were hoping for redemption at the state tournament but within minutes their run was over. It was that fateful Thursday when all college and professional sports began to shut down.

“I feel like all I’ve done lately is deliver bad news,” Walters said. “Back in March, we drove up to Bucknell and we were there for all of 10 minutes when the PIAA spokesperson called us in and said, ‘Pack your things and go home. We’re cancelling the meet.’ After that, I had to cancel our banquet then spring and summer workouts.” 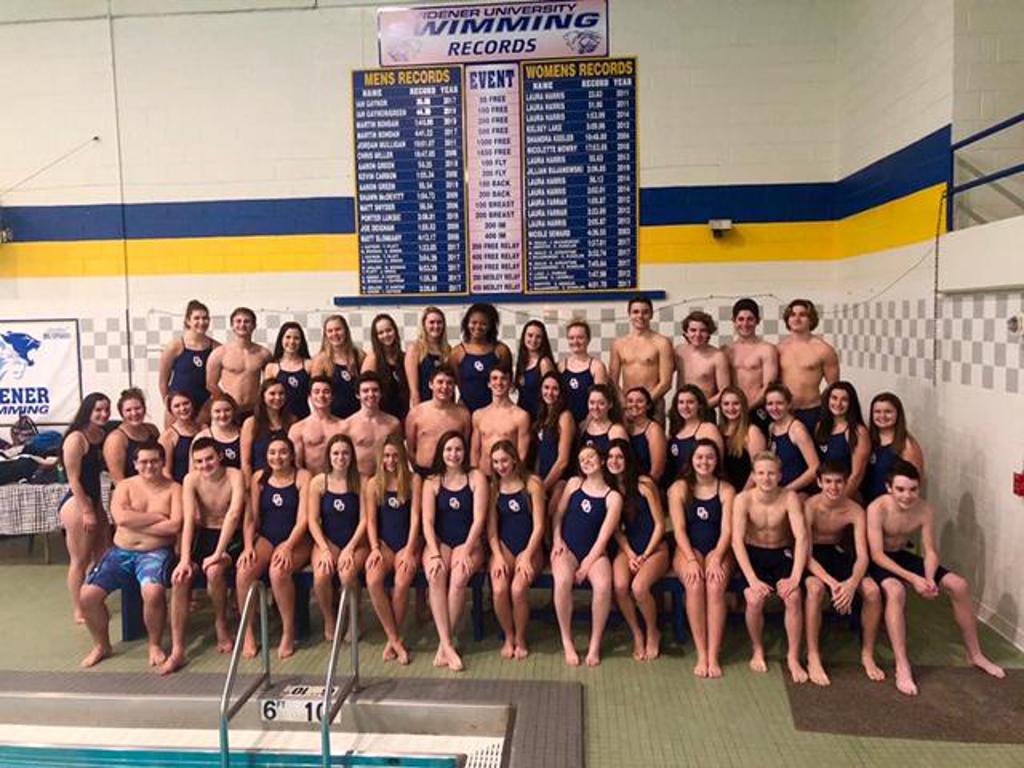 While Walters coaches two teams that compete in the winter, she has witnessed firsthand as an athlete and as a coach what it was like to have a season cut short or not even take place. While a member of the swim team at Mansfield University, the women’s swimming program was cut during her senior season and has not been resurrected since. “I never got to finish my career and I don’t want to see that happen to this group,” Walters implored. As a head coach, she has had to address her team as if she was her college coach relaying the demoralizing information she once received.

She’s uneasy about the trajectory of winter sports at this point and wary about how, if fall sports are moved to the spring, schools will work to allow multi-sport athletes ample time to theoretically participate in more than one.

“In high school, I played field hockey then I swam, and I also played softball,” Walters recalls. “Generally, we had two to three weeks before the next sports season began, and I jumped into another sport. If they do move sports to the spring and we have a swim season, we’re jumping right into this season and there’s a different way of being in soccer shape compared to swimming shape.”

The task that the Archdiocese of Philadelphia faces now is 1) finding a way to make fall sports work during the spring season and 2) being content with only having a league title awarded. With other fall leagues starting, it is still unclear how the PIAA plans to sort out district and state championships. They are planning to hold both, but the acceptance process is expected to be different. During its board meeting to decide how to move forward with fall sports, the PIAA stated it was open to having two fall sports seasons: one now and another in the spring if there is a postponement. That is a worst-case scenario right now, but it could be something to consider as the first few weeks of practices, and finally games, get underway.

For a player with a lot to build on following last season’s success, Jackson has been overwhelmingly positive since hearing of the decision and he’s hoping for one last shot on the field in the spring under first-year head coach Matt Walp, who took over in May for Kyle Adkins.

“It would be really great to have a final year of football, especially since last year was my first year,” Jackson said.

Watkins and the Lancers will continue to work out and do as much as they can as a group while abiding by restrictions and the school’s Return to Play Plan that he helped create. They are remaining hopeful as is the rest of the league. 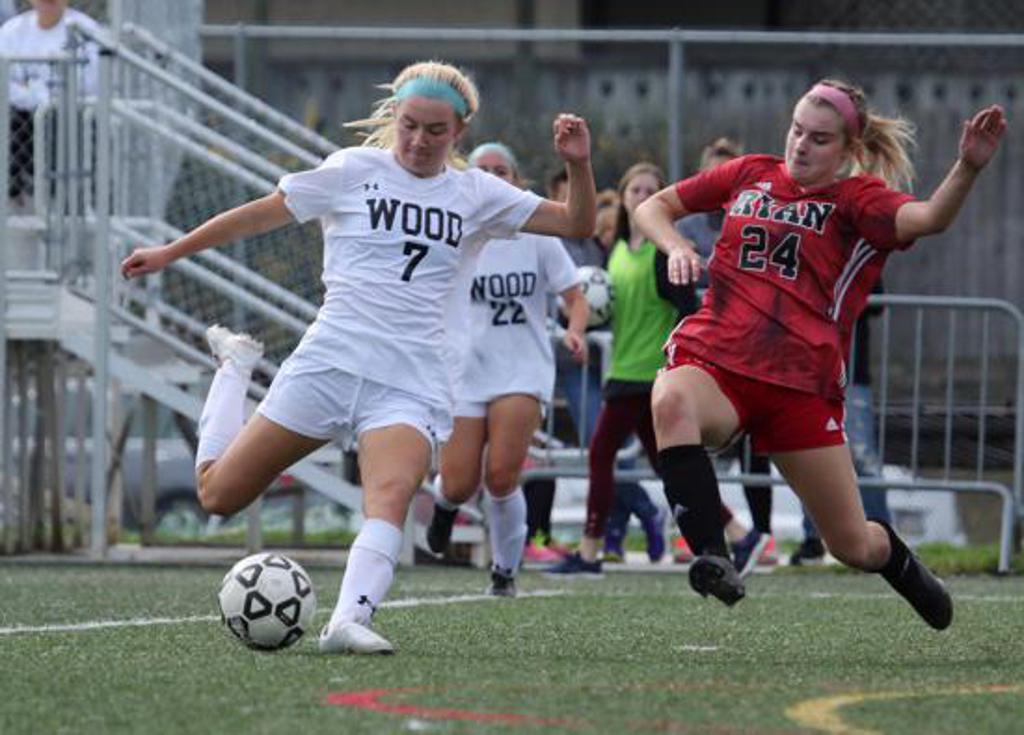 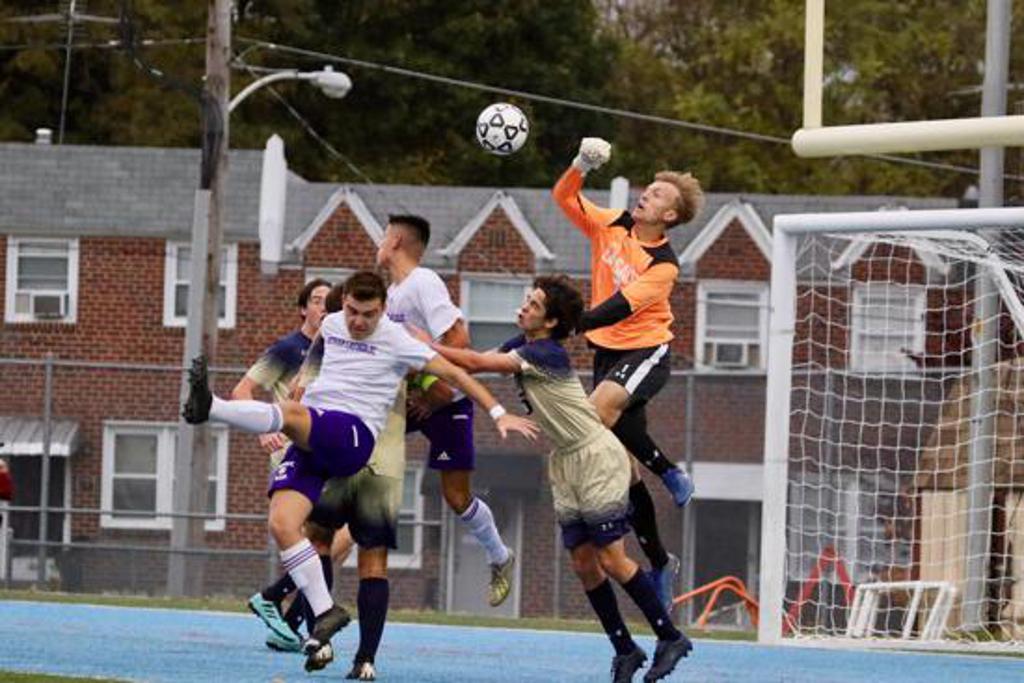 La Salle vs. Roman in 2019 PCL Championship game. Tough play by both teams, the Explorers won in penalty kicks after two scoreless overtimes. (photo by Donna Eckert for PSD).

“The archdiocese has to do whatever they feel is safest and we have to support that,” Watkins said. “We’re turning this into a positive, that’s for sure.”