PHILADELPHIA - A day that’s supposed to be filled with tailgating and family fun outside of Lincoln Financial Field looked a bit different for Temple University’s homecoming weekend.

Besides for a few family members who were allowed to be in attendance, Owl’s fans enjoyed a close contest in the comfort of their own homes.

Coming off of last week's loss against Navy, with a final score of 31-29, the Owls knew they had to up the tempo both offensively and defensively with USF.

Graduate student quarterback Anthony Russo, who totaled 270 passing yards, came out strong in the first quarter. Russo threw to redshirt junior receiver Jadan Blue, who had 60 receiving yards and two touchdowns, to put the Owls on the board with their first touchdown of the game.

The Bulls caught up with the Owls later in the half, after Russo attempted a pass to graduate student receiver Branden Mack, which was intercepted by USF defensive back Mekhi LaPointe and returned for 21-yards to Temple’s 35-yard line.

“The two picks were the right reads, it’s a matter of getting the ball into the right spot. But that’s better than me forcing, like last week against Navy,” Russo said. 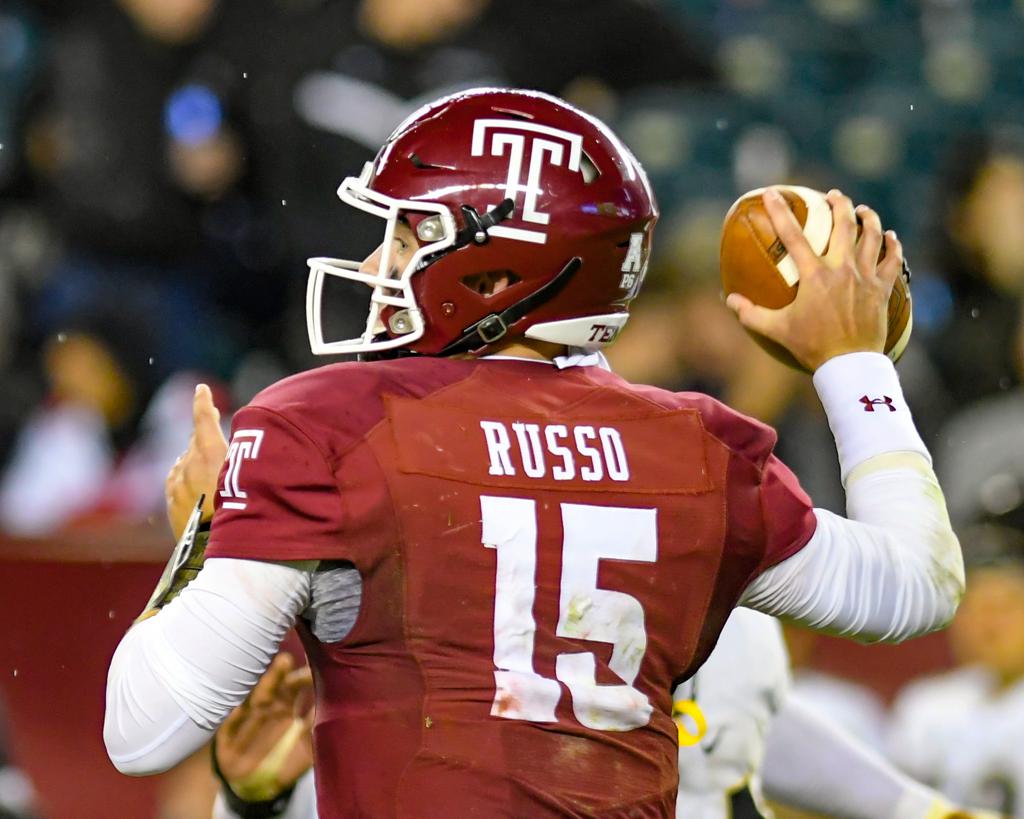 Owls QB Anthony Russo was recently added to the Johnny Unitas 2020 Golden Arm watch list, which is awarded to a player who is recognized for his athletic accomplishments, character, citizenship, scholastic achievement & leadership - Photo:Mike Nance

The Owls trailed by four points going into the half, down 21-17. Russo and the Owls offense started the second half slowly, coming away with a 26-yard Will Mobley field goal instead of a much needed touchdown.

USF maintained its offensive dominance in the third quarter. Quarterback Jordan McCloud completed a 13-yard pass to Johnny Ford for another Bulls touchdown.

With 1 minute and 7 seconds left in the third quarter, Russo completed a 12-yad pass to Mack for a touchdown . Going into the fourth quarter, Temple trailed USF 31-26. The Owls were in need of a major stop on defense.

Homecoming prayers were answered for Temple fans. USF’s running back Kelly Joiner fumbled the ball, and it was recovered by redshirt junior defensive end Arnold Ebiketie, who returned it 11-yards for a touchdown.  Ebiketie finished with six tackles, including a sack and 3.5 tackles for loss.

“The defense, every time we are out there we just try to execute the play, and once the ball was lose I just had to grab it and score,” Ebiketie said.

On the ensuing drive, Temple’s defense forced the Bulls to punt. With four minutes remaining in the fourth quarter, Russo threw a 13-yard pass to graduate student receiver Randle Jones for a touchdown.

Although the Bulls tightened the gap off a one-yard touchdown run from Leonard Parker, the Owls pulled off the homecoming victory with a final score of 39-37, advancing Temple’s record to 1-1.

“This team hangs in there, they don’t flinch,” Carey said. “We were a little down at halftime after the blocked field goal and all of those different things, but they hung in there and found a way.”

Looking ahead, the Owls will travel to play the Memphis Tigers (2-1) on Oct. 24. Memphis is coming off its own close victory vs. UCF (50-49). Kick-off is scheduled for Noon.