PHILADELPHIA – When checking in with high school coaches and players during this global pandemic, one can expect a fluid landscape on a daily – let alone weekly – basis.

Among the fall sports that have tried desperately to make the most of its opportunities is boys’ soccer. Nine Philadelphia Catholic League teams are fighting toobtain a PIAA state tournament berth; three (Bonner-Prendergast, Cardinal O’Hara, and Bishop McDevitt) opted to only play a PCL and non-league schedule; one (Father Judge) is considering competing against non-league squads in the spring. 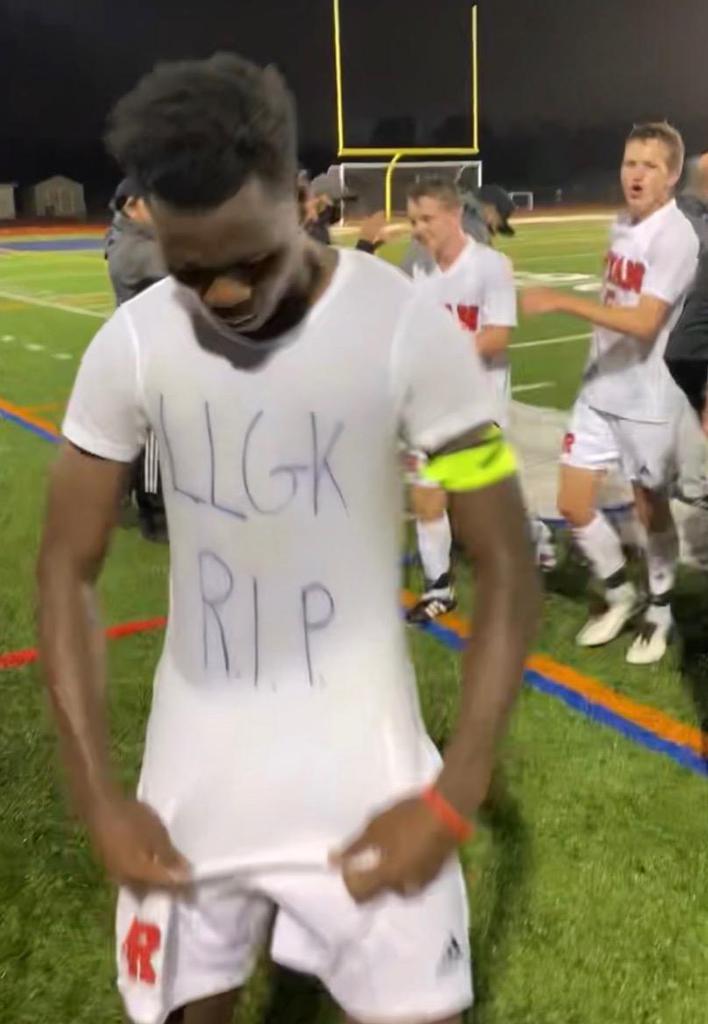 After assisting on Tim Cliggett’s double overtime goal in a 2-1 victory over over Upper Merion on Oct. 26, Archbishop Ryan’s Sidiki Fonfana shows his undershirt he wore that paid homage to deceased former teammate George Karusky.  (Photo by Ryan Stock)

No team has endured more challenges than Archbishop Ryan. The viral meningitis death of extremely popular former teammate George Karusky back on April 23, combined with not knowing they would have a season until a few weeks ago, left the Raiders reeling.

Through four games, however, the Raiders have looked as strong as any program in the area. They defeated PCL squads St. Joseph’s Prep, Bonner-Prendergast, and Conwell-Egan by a composite 13-0.

The death of their fallen comrade continues to be at the forefront of Ryan’s approach to playing soccer for as long as official decision makers allow.

“Honestly, this is a very emotional season for the program and for me personally,” said Fofana. “We lost a great teammate and family member. George was a leader, and we relied on his positivity and generosity to help us win. He played every position. All we wanna do is win and make him proud. This is our main agenda.

“We take his jersey to every game. It’s a reminder of who we lost in our journey towards a title run, but more importantly, he will always be here even if he’s not here physically.”

So far, the Raiders have remained laser focused. Their ultimate goal is to defeat Archbishop Wood for the Class 3A berth and then advance as far as possible in the state tournament.

If they can somehow metaphorically climb such a steep mountain, it would help ease some of the pain from which the Ryan players and coaches cannot escape.

“I’m not worried about personal stats or none of that,” said Fofana. “We just wanna win and put this program where it belongs. My high school career has been amazing, and I want to end it on a winning note.”

Thankfully, the other PCL schools don’t have to carry such enormous emotions to every practice and game.

Defending PCL champion La Salle is 7-1 and, with victories over St. Joseph’s Prep and Roman Catholic next week, would clinch a PIAA Class 6A berth.

“Although it has been difficult with scheduling games, the guys are just happy to play as many as we can,” said La Salle senior Ben Herron. “We have only played eight games and it is November already, but the guys are excited for what the future hopefully holds.”

At Roman Catholic, junior captain, three-year starter, and returning first-team All-Catholic Joey Lodise has impressed coach Ray DeStephanis because his “leadership on and off the field has been great,” aiding the Cahillites to a 2-2 overall record.

“On the field, considering we’ve only been at it for a little less than a month, I’m encouraged,” said DeStephanis. “We have some really good young talent who are getting their shot to play. On the whole, it’s coming together every day.

“Off the field, it’s definitely been much different. We all have to adhere to protocols on everything from school attendance, who’s permitted to attend matches, how the team is safely getting to and from practices and matches, who needs to isolate, and contact tracing if there’s been exposure or illness . . . even where we are allowed to actually play.

“I won’t lie, it’s exhausting. In the end, I believe it’s beneficial for the kids to be actively engaged both physically and mentally, especially the seniors. It’s been a tough go and hopefully playing a season, as strange as it might be, is a bit of a return to normalcy.”

At Lansdale Catholic, the Crusaders followed an earlier impressive win over Roman Catholic with shutouts of Pope John Paul II (6-0) and Conwell-Egan (4-0). In the latter win, junior Eric Fernandez scored twice, forced an own goal, and assisted on another tally.

“It has been very different playing soccer this year then any other,” said senior goalie Kellan Ward. “There are always surprises and last-minute changes, but everyone is just grateful that we’re getting opportunities to still play this year.”

Lansdale junior Jack Edling joined the rest of the chorus in admitting that this fall has been like no other.

“Not being able to play the schools we are used to, and playing them late in the year, is very different,” said Edling. “It also is challenging to play during this time period because of the surprises of COVID-19 cases in schools.

“Although we are being put through these challenges, I think our team is dealing with this epidemic well – treating it as if it were a regular season. We are happy to be out there playing because any game could be our last.”

Fernandez leads the team in scoring with three goals, followed by two each by senior Matt McDougal, senior Owen Webster, and Edling.

At Conwell-Egan, the Eagles are staying positive despite early struggles that are magnified by not playing even close to a normal schedule.

“It’s been a really weird year so far and has been challenging to get the ball rolling when a lot of stuff is restricted,” said Conwell-Egan senior Josh Rifkin, whose Eagles try to garner their first victory after four losses. “It’s also been really challenging not knowing if we may get shut down if there are any positive cases.

“It’s also hard on our team to even try to prepare for games because a lot of the games are so close together and doesn’t give us time to get ready physically and mentally.”

At Bishop McDevitt, the Lancers are 0-2 despite only allowing three goals and, in a 2-1 loss to Phil-Mont Christian Academy, they doggedly fought despite enduring the entire contest with only 10 available players.

“It’s been extra-challenging as a first-year head coach in the Catholic League,” said McDevitt coach Kevin MacFarland. “I had to try and learn and adapt as quickly as possible to new student schedules, COVID protocols, as well as new faces and names. The boys have been extremely receptive to me coming in, and it shows every day at practice and in the games.

“The thing I am most impressed about with our team is the accountability and effort that the senior leaders have taken on. They are truly setting a great example for the underclassmen and setting them up for success in the future. It’s been an awesome first couple months for me, and I’m very excited for the rest of the season.”

Devon Prep was thrilled to notch its first triumph after a long losing streak. Behind goals by junior Chris Walton and senior Ethan Skorup, the Tide blanked Conwell-Egan, 2-0.

“It was definitely really exciting for us,” said Walton. “That’s exactly what we worked for all season, and to see it finally work out was a relief. We played great for all 80 minutes and put out our best effort of the year.

“Our record is definitely not what we were hoping for, but our goal was to improve every game and we’ve been doing that, and getting stronger as a team. As the season has progressed, it’s felt more and more like the norm. We practice every day, have a few games a week, and are together as a team. Our coaches and athletic director have done a great job dealing with the COVID-related issues while we’re just playing and working as a team.”

With C-E out of the way, Devon will face Archbishop Carroll and Lansdale Catholic, with one of those teams ultimately advancing to the Class 2A playoffs.

At St. Joseph’s Prep, the Hawks have had to deal with pandemic-related closures. Uncommon resilience, however, has the Hawks looking at a 2-1 record (wins over Devon Prep and Archbishop Carroll; loss to Archbishop Ryan) with key contests versus fellow Class 6A opponents La Salle and Roman Catholic on the near horizon.

“Our team is hanging in there, practicing when we can, and making the most out of this odd season,” said senior Owen “OB” Brown. “Getting the chance to play soccer in these uncertain times is bittersweet. I’m getting somewhat of a senior season, playing in games, and seeing the boys, but it’s just so different than what I expected.

“As far as other members of the team, like underclassmen who are finally getting their shot at varsity, it has been that much more difficult to showcase their talent when practices and games are limited. Overall, I’m extremely thankful for the coaching staff and the effort they’ve put in to get us to where we are now. A modified season is better than no season.”