RADNOR, PA – Scoreless at halftime, it was doubtful that the game would ultimately reach sudden-death overtime, where anything could happen, and often does.

Then one goal broke the ice . . . then a second tally severed any remaining suspense . . . then a third successful boot made it insurmountable.

“I think our halftime speech from our coach (Tom McCaffery) really motivated us,” said La Salle junior Jake Barton. “He pointed out things we were doing wrong and things that we needed to do better. Overall, momentum pushed us forward to play better in the second half.”

Junior Eddie Donovan scored what proved to be the game-winner – his fifth tally of the season – off an assist from senior Lucho Narcisi. A successful penalty kick by junior Sean Jennings doubled La Salle’s lead, and senior Brandon Curran finished the scoring with a bit more than three minutes remaining.

Like all high school athletes and coaches, Donovan isn’t taking anything for granted during a global pandemic.

“We’re just thankful to be here now moving onto states,” said Donovan. “You look back at it, there really wasn’t any expectation at all for anything.”

Barton and Donovan share a special bond because they are first cousins. The pair played four years of club ball together, along with four years in the Catholic Youth Organization (CYO) for their Catholic parish St. Alphonsus in Maple Glen.

A center midfielder, Barton has been on varsity since freshman season; a left wing, Donovan reached the top level last year.

“It’s always a little special getting to play out there with Jake,” said Donovan. “Our grandparents love it more then anyone. He’s also my neighbor, so we’ve grown up with each other our whole lives.”

An important contributor on one of the best teams in Pennsylvania and enjoying the ride with a special relative, Barton is in no hurry for his scholastic career to come to an end.

“Playing soccer with my first cousin is awesome,” said Barton. “We have been playing together since we were little. It’s amazing to be able to play and gain chemistry with the same player for this long.

“I think it has helped me develop as a player while having fun with my cousin at the same time.”

“Jake and Eddie are two of our key pieces to this season’s success,” said McCaffery. “What they have done as super subs has helped turned games for our team.

“It is special to see cousins that are as close as they are. I know their families enjoy the opportunity to watch them play together and to be successful.”

“Winning the PCL last year is something I’ll never forget,” said Donovan. “The team last year went through a lot, and that was a really special moment for all of us.It’s always the top goal.”

“It was truly an unreal atmosphere that I am lucky to have been a part of,” said Barton. “The game was awesome, and I am looking forward to more games like that one in the near future.”

Never-Say-Die Devon Prep Gets Hot and the Perfect Time...

After an 0-12-1 start, Devon Prep embarked on a three-game winning streak to seize the Class 2A District 12 crown. The clincher, a 1-0 shutout over Lansdale Catholic, was the Tide’s third straight must-win success after previously downing Catholic League foes Conwell-Egan, 2-0, and Archbishop Carroll, 2-1. 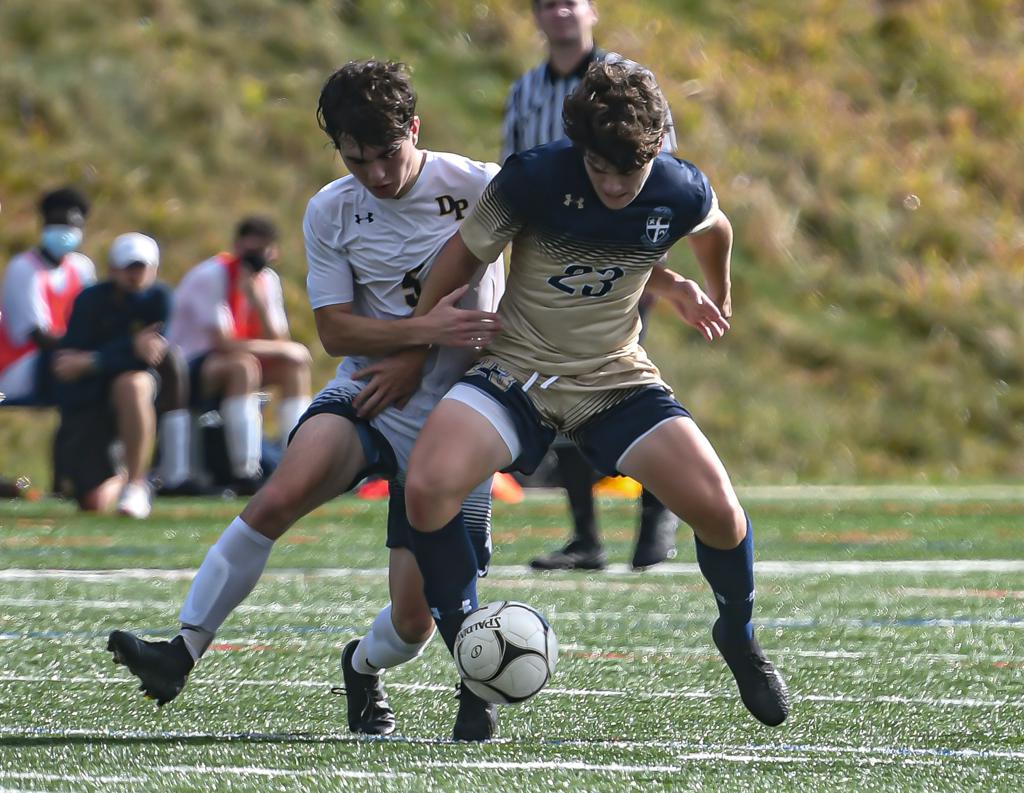 “To go from 0-12-1 to being district champions says so much about the character and the resiliency of this team,” said Devon Prep coach Tim Lazorko. “They battled every game, and even when results weren’t going our way, they never put their heads down and quit. They continued to trust each other and trust themselves.

“With the circumstances we have faced through this pandemic, we owe it all to our administration and our athletic department for allowing us this opportunity to even be playing soccer. I am excited to watch this group grow ever more and compete in the state tournament.”

Devon’s third straight trip to states will begin with a November 14 visit to District 3 champ Oley Valley 2 PM on November 14.

“The early part of the season wasn’t what we were hoping for, but I could definitely tell we were all getting better,” said junior Chris Walton, who brings a three-game wining streak into states. “We were playing well but weren’t getting the results we wanted. We just kept working and kept getting better as a team and took it game by game.”

In a battle between two other Catholic schools on November 7, the Class 3A District 12 champion was determined.

Behind incredible goaltending in the final minutes by sophomore Joey Phillips and goals by seniors Sidiki Fofana and Teddy Westervelt, Archbishop Ryan rebounded from a 1-0 halftime deficit and defeated Archbishop Wood, 2-1.

The victory propelled the Raiders into the first round of the state playoffs three nights later, a 5-1 win over District 11 champion Northwestern Lehigh. Now in the quarterfinals, the Raiders will visit the home of District I champ Upper Moreland 4 PM on November 14.

“We know playing in any state games isn’t going to be easy,” said Fofana. “The boys and I will come out to compete and have fun while doing it. We are confident and we fear no team. We only have respect for them. We know it won’t be an easy game, but we are confident.”