WHITEHALL, PA - Playing into overtime in championship games has become a regularity for Archbishop Carroll. A year ago, the Patriots fell in the extra period to Cardinal O’Hara in the Philadelphia Catholic League title game. It prevented them from securing a second straight league crown and they eventually lost to Upper Perkiomen in the PIAA Class 2A Tournament first round.

The Patriots returned a seasoned roster spearheaded by senior defender Carleigh Conners (James Madison), senior forward Julia Kingsbury (Saint Joseph’s), fellow senior forward Karli Doughtery (St. Joe’s women’s lacrosse) and junior midfielder Grace O’Neill (Drexel women’s basketball. While O’Neill was a starter as a freshman on the Patriots basketball team that downed Archbishop Wood at the Palestra for the Philadelphia Catholic League title in 2019, all four had dealt with the anguish of losing in a league title game together.

That fire, combined with the up-and-down offseason due to the COVID-19 pandemic, fueled the Patriots and kept them focused on what they could accomplish. Seniors like Conners blocked everything else out and fixated their gaze on their play on the field.

“We were two full weeks of preseason and then we were shut down due to COVID-19,” Conners said. “From day one, all of the seniors knew this was a special time with a special group of girls, especially after losing to O’Hara in the championship game.”

Archbishop Carroll’s season came to a bitter end on Saturday as Anna Miller scored the game-winning goal in overtime to propel Palmyra to a 2-1 victory in the PIAA Class 2A Tournament title game at Whitehall High School. Alex Derr fired a backhand shot off a corner and Miller got a shot on goal, which was denied by Patriots goalkeeper Courtney Keith. Keith was unable to maintain possession and Miller buried the decisive goal on the second attempt with 8:55 remaining in the extra period.

What was striking was the look on the Patriots’ faces after that final goal had gone in the back of the net. Instead of the disappointment similar to the aftermath of the league title loss to the Lions, Conners and her teammates put their arms around each other as they walked off the field with their heads held high. The mood was overwhelmingly optimistic and, while they would have preferred to have been raising the state title trophy, the Patriots were proud of what they have accomplished in a season marred by uncertainty.

They became the first Philadelphia Catholic League and District 12 team to reach a state field hockey title game. They made the state semifinals for the first time in program history after having made the 2A quarterfinals in 2015 and 2018. The Patriots (10-2) had to put together a schedule that was unorthodox from seasons in the past as they faced off against teams such as Pope John Paul II, Phoenixville and Dock Mennonite.

Head coach Christina Elisio felt playing different teams and traveling to different areas prepared her team for a potential state tournament run. She knew she had an experienced group that came together and took care of its business.

“It was nice to play some teams we had never played before,” Elisio said. “From freshman to senior, they worked behind the scenes. They knew they wanted to get here and, if they were going to get here, they were going to have to work their butts off. Kudos to them because they spent time after practice and on weekends getting together to really put the time and effort in to get to this place. That was their number one goal and they got here. I have to say from the very first practice, they have grown tremendously. We knew from the first practice that there was something really special with them.”

The feeling of optimism after the loss extended to the entire roster, particularly with Conners. She was a starter on that team that fell to Cardinal O’Hara but she was instrumental in both of the Patriots’ wins over their rival this season, the last one being a 5-0 triumph.

It was at that point that she knew this team had a chance to be special.

“We got halfway through our season and beat them twice,” Conners said. “That gave us an extra shot of adrenaline and realized we could be pretty good this year. We started seeing it through the first couple of weeks in October when we were playing teams we had never played against.”

Palmyra (15-2) looked like the more seasoned team to start and no surprise considering it was making its third straight 2A title game and eighth state title appearance since 2005. The Cougars fell to Wyoming Valley West, 2-1 in last year’s final.

The first shot of the afternoon was fired by Alexa Derr at the 13:56 mark of the first period and the Cougars controlled the ball for much of the opening half. Morgan Spagnolo almost had the first goal of the contest as her shot off of a corner to end the first period hit the post. 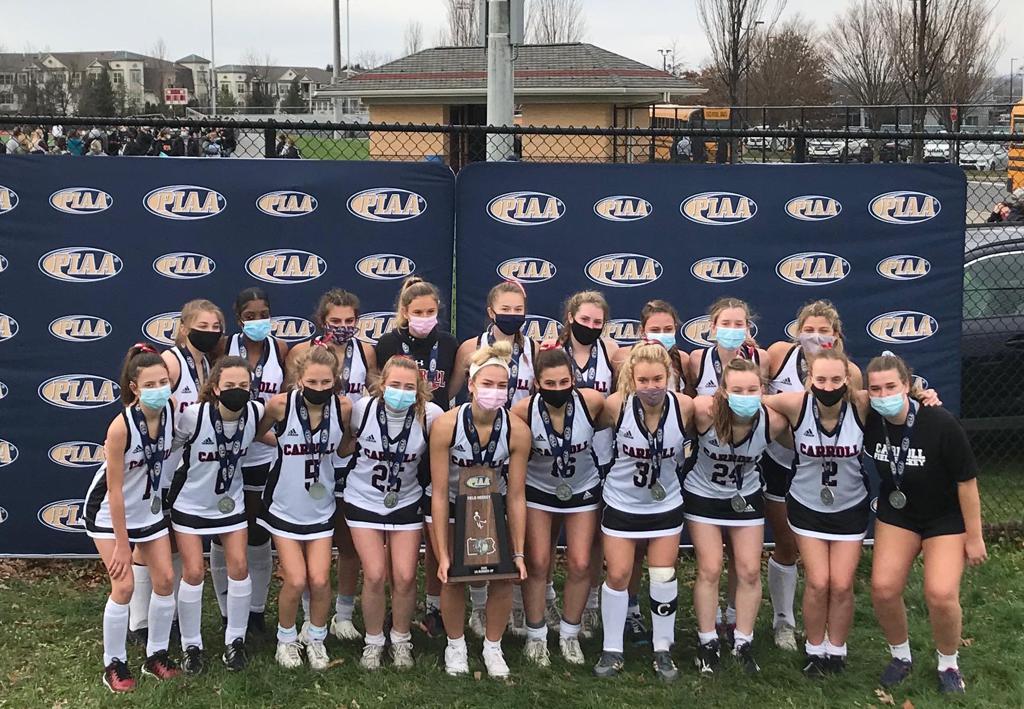 Freshman Sienna Golden made her presence felt in the second period with a shot on goal with 7:03 left before halftime. She was called for an offside violation seconds earlier on what would have been the Patriots first goal. She would be heard from again.

The Cougars possessed the ball for much of the period and Keely Bowers put them on the board with a goal with 1:23 remaining in the second. Deficits were uncommon for Archbishop Carroll this season, especially considering its strong defensive unit and the outstanding play of Keith (eight saves) in net. They came into the contest with a point differential of plus-28 and had held their opponent scoreless in five contests. Still, in what had become a storyline of the season, the Patriots responded.

Conners passed it off a corner to O’Neill, who swung it back to Conners. The senior defender fired it into the middle where Golden took a shot then settled the rebound and scored past Cougars goalkeeper Katie Knol at the 6:23 mark of the third period. Riding the momentum of their strong play in third, the Patriots nearly took the lead as Golden drove the ball deep in Palmyra’s zone 22 seconds in the fourth. Conners had a shot on goal with 5:39 left in regulation that ricocheted off Knol’s leg.

Ultimately, Miller’s goal set off the celebration of the Cougars’ first state title in 15 years. There was no feeling of despair on the Patriots’ sideline. They graciously accepted their runner-up trophy and knew they had gone toe-to-toe with one of the premiere programs in Pa.

Conners emphasized that after the loss.

“We knew Palmyra was a really skilled team and give credit to them for finishing,” Conners said. “We’re as good as them. It was a 50-50 game. When they scored, we tied it up and it was basically back to being 0-0. Anytime someone scores on us, which hasn’t been a lot, we just get into that mindset that we can tie it and make it 0-0 again. Our coaches have been repeatedly telling us this year that adversity is a good thing and getting through those obstacles, especially with COVID-19 and everything else going on, we have to play as a team and work with what we have.”

While Conners and the rest of the senior class are moving on, the mood around the Archbishop Carroll program is this is just the beginning. They got revenge on the Lions and advanced to the state title game in a season many believed would never take place. O’Neill, Golden, and sophomore defenders Kendall Carson and Courtland Schumacher will all return next season and look to build on several firsts for the team.

Elisio was beaming with confidence, even after what would have been seen as an excruciating loss by most standards, and she could not be more pleased with the state of her program.

“We’ve got talent, speed and athleticism all across the board and we’re going to lose a lot of great seniors but we have a lot of freshman, sophomores and juniors, who are going to represent this team just as much as this year and make those seniors proud,” Elisio said. “I will have to say this is history here today. No team in the Philadelphia Catholic League has ever made it to the state championship. Carroll put their name on the board and it’s a really great feeling.”