RADNOR, PA - Much of Neumann-Goretti’s success a year ago was attributed to three players: Jordan Hall (St. Joe’s University), Hakim Byrd (Marist) and Cameron Young (Bowling Green). All three have moved on and become immediate contributors at their new schools after leading the Saints to the Philadelphia Catholic League title.

One of the starters from last year that tended to be overlooked was Hysier Miller. The 6-foot-2 senior guard was a Second Team All-Catholic in his first season since transferring in from Martin Luther King High School, where he was an All-Philadelphia Public League Independence Division Third Team selection as a sophomore. The Independence Division consists of stalwart programs in Imhotep Charter, Constitution Math, Civics and Sciences, and Sankofa Freedom, all of which have won at least one PIAA state title in the last decade.

Miller was quite accomplished before coming into the Saints program and he became an immediate contributor alongside those three impressive seniors. He led the team with 24 points in a home victory over Archbishop Wood. He averaged 16.3 points during the Philadelphia Catholic League playoffs, capped off by a 17-point performance at the Palestra in the title game.

His dynamic junior season translated into an offer, and later a commitment, from Aaron McKie and Temple University. He became the first Neumann-Goretti player to commit to a Big 5 program since Dhamir Cosby-Roundtree (Villanova) in 2017.

As the unquestioned leader of the Saints heading into his senior season, he began to notice that this season was going to be another example of the “next man up” mentality. With COVID-19 still at the forefront of every move made regarding high school sports in Pa., depth has become more apparent than ever and Miller knows his teammates are ready to meet the challenge.

“Stay ready because we’ve had guys go into quarantine and sit out games,” Miller said. “I missed a game, so guys need to be ready. We try to instill trust and make sure everybody thinks, ‘It could be anybody’s night.’ It’s the culture since I’ve been here. It’s never one person; it’s a team thing.”

Miller posted a double-double with 15 points and 10 rebounds while senior sharpshooter Chris Evans hit five three-pointers on his way to 17 points as Neumann-Goretti cruised to a 75-51 victory over Archbishop Carroll. It was Miller’s third double-double of the season and a testament to the work he has put into other areas of his game, Last year, he was solely utilized as a scorer and now he is having to do more with the loss of several talent players, particularly Hall, who was the team’s leading rebounder last year.

Head coach Carl Arrigale has been so impressed with Miller’s ability to control the glass but knows this is an ability he has always possessed since joining the program.

“Last year, a lot of people didn’t know he could do that, especially playing with two guys who are playing at the collegiate level right now,” Arrigale said. “He was out there with them a lot. It was a pick your poison type of deal where any one of them could create. We didn’t have defined roles. We could play five guys who played as one. He has to be the leader and the guy that has the ball.”

Miller scored the Saints (4-1) first basket of the game with a triple from the top of the key then Evans hit his first three-pointer of the game on the ensuing possession. A fast-paced first quarter was highlighted by the Neumann-Goretti backcourt and Archbishop Carroll’s tandem of 6-8 forward Anquan Hill (10 points, five rebounds, and two blocks) and 6-3 freshman Moses Hipps. Hill’s lone basket of the quarter was a straight drive from the top of the key past the Saints’ Blaise Vespe. Hipps scored 11 of 13 points in that opening eight minutes with a layup giving the Patriots (4-4, 3-4 Philadelphia Catholic League) their biggest lead of the day at 12-8.

A three-pointer from Miller was the Saints last bucket of the quarter and they took a four-point advantage into the second. Evans hit another triple then 6-7 University of Buffalo commit Zaakir Williamson converted a shot inside to give Neumann-Goretti a 29-20 lead with 5:54 left before halftime. Another finish by Williamson spurred a 12-4 run to end the quarter and the Saints led 41-27 at the break.

Williamson, who finished with 10 points and seven rebounds, transferred in this offseason after two seasons at Rock Creek Christian Academy (Md.). He is originally from Philadelphia and began his high school career at West Catholic. He has been an assertive presence inside for the Saints and he is building a rapport with Miller and the supporting cast. 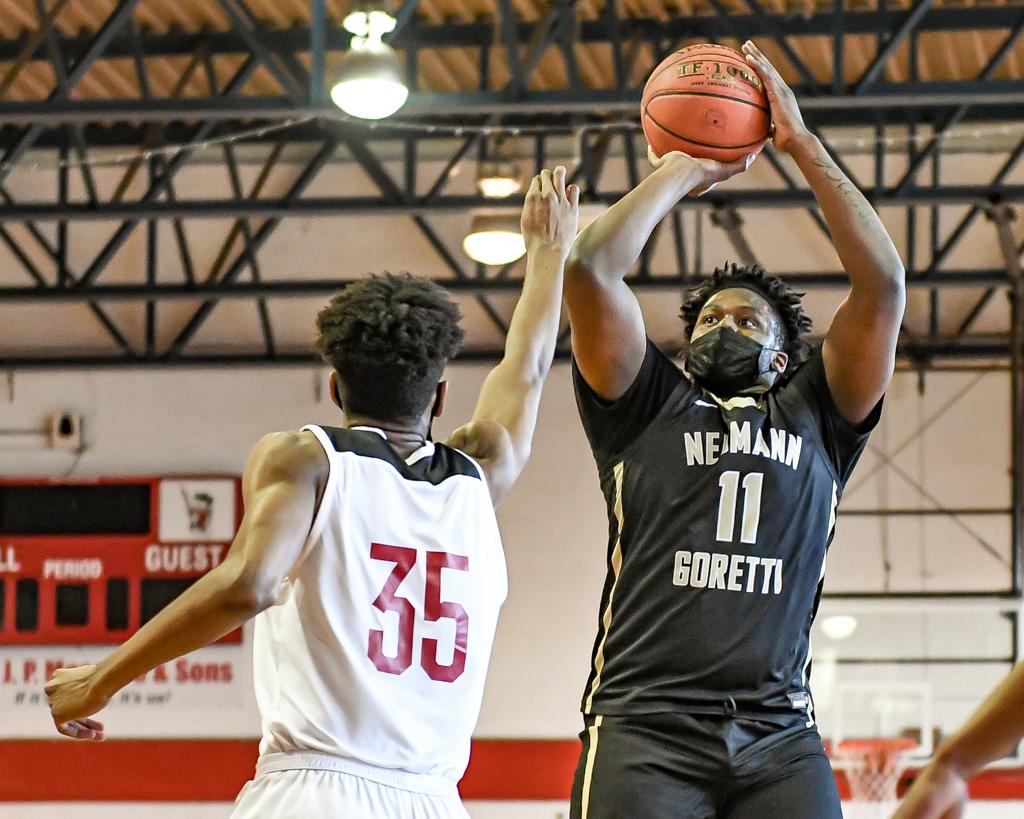 “We’re just trying to control the offense,” Williamson said. “We have Chris, Blaise and Masud [Stewart.] That’s a lot of great players. Chris is a shooter and that makes it easier for us to drive through the gaps. We’re both able to rebound, score and pass. It’s important for us to know when to do it.”

The Saints put the game away in the third as Stewart began the quarter with a pair of free throws then Evans hit a deep triple from the right wing to push the lead to 46-27 at the 6:46 mark. Later, Miller converted a nifty and-one to extend the lead to 28 with 3:21 remaining in the quarter.

Patriots head coach Francis Bowe, whose team surrendered 11 three-pointers and only made four, saw his team contest shot after shot but could not match the opposition at the offensive end.

“They can really get down the floor,” Bowe said. “You try to control the pace and keep Hysier out of the lane. You want to make them uncomfortable. They only scored 48 points against Bishop McDevitt and didn’t shoot the ball well in their own gym. They played a back-and-forth game against La Salle. Then, they came out and hit a bunch of shots today.”

Neumann-Goretti’s only blemish is its one-point overtime loss to Archbishop Wood. Arrigale’s team is receiving contributions from an array of players. Vespe scored 10 points, including an emphatic slam on Archbishop Carroll’s Chase Coleman. Shawn Battle added nine points off the bench. Following the loss to the Vikings, they have responded and look like one of the best programs in the league once again. 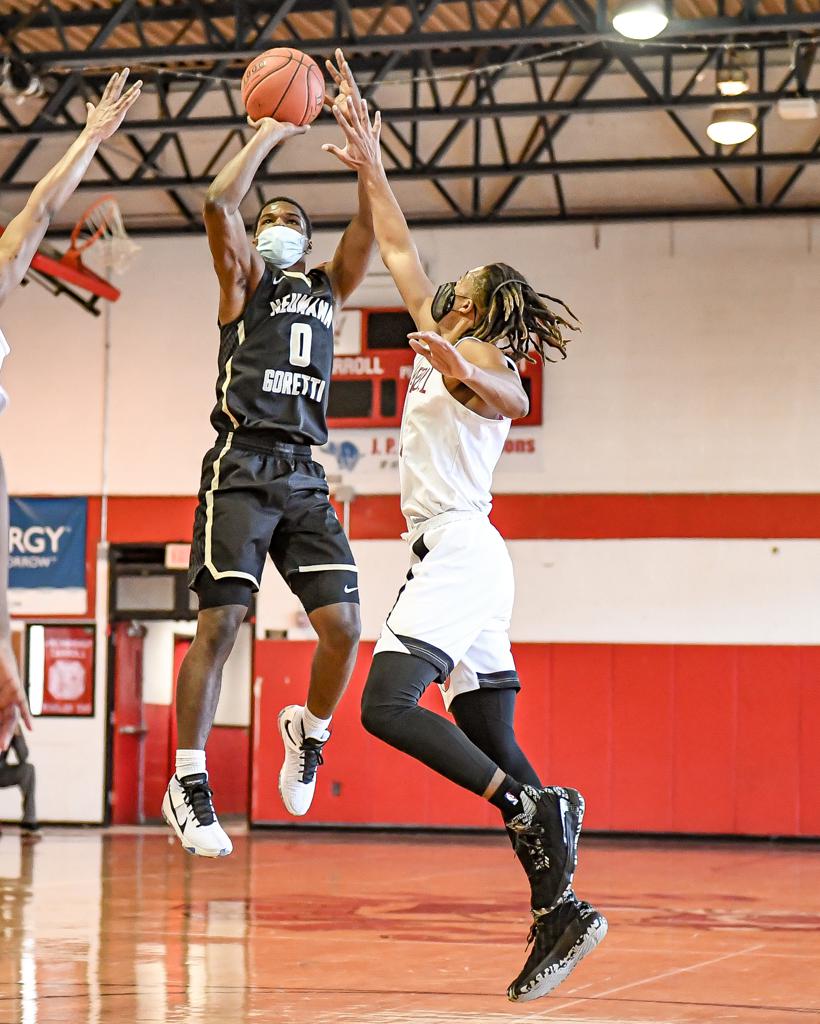 The season is only five games in, and Williamson believes he and his teammates still have more growing to do before they hit their peak.

“While we lost, we’re still very fresh to the system,” Williamson said. “It will take some more time and practice. We have five games coming up. We’re going to have three practices and five games. Everybody is developing into their role. That’s why you see us out there moving the ball. Our goal is defensively. We know offense is going to come but our goal is keep the opponent under 40 to 50 points.”