Piggybacking Montgomery’s monstrous performance of 34 points (14-for-18 shooting from the floor; four of four from the foul line), five rebounds, three steals, and a block, the Lady Burrs corralled their school’s first-ever PIAA state title by defeating talented Class 3A District 7 champ Mohawk, 67-56, in front of 325 attendees March 25 at the Giant Center.

The victory helped mitigate last year’s disappointment of an almost certain West Catholic state title muted by the coronavirus prior to the quarterfinal round.

“I’m just happy we got the ‘dub’ for my team and my coach,” said Montgomery, who fell two points shy of her career high. “In these four years, we just pushed through it. I love them so much. All the hard work paying off is all that matters.

Two weeks into the season, the Lady Burrs had just finished a stretch of elevator basketball.

Up one quarter, down the next. Focused on one possession, mindless on the next.

Though unable to repeat as Catholic League champions, the Lady Burrs entered the tournament playing at a high level and did not skip a beat, winning their first two tournament opponents by scores of 62-52 and 59-33. Mohawk, however, posed as a serious threat.

After Mohawk used three straight drives to the hoop for an early 6-0 lead, Osueke called time. The Lady Burrs responded with a 16-6 spurt. West opened a 23-15 lead early in the second, but a surprising 8-0 Mohawk surge tied the game.

West Catholic senior Ciani Montgomery had no idea she had scored a game high 34 points. (video: John Knebels for PSD).

Like she did at various junctures, Montgomery regained West’s momentum with two baskets – one via a steal – and senior Ti’Eisha Walker (game-best plus 15) added a bucket to offset a late Mohawk three.

Sitting with an uncomfortably close 29-26 halftime lead, the Lady Burrs seized control in the third quarter. A basket by senior Destiney McPhaul, free throw by senior Patience Sanders, steal and basket by McPhaul, and a three pointer by senior Daziy Wilson (nine points, three assists) increased West’s lead to 37-26. The Lady Warriors would eventually use a pair of treys to cut their deficit to 39-35, but in the final minutes of the third quarter, Montgomery on her own outscored Mohawk 7-5 to put the Lady Burrs in front, 46-40. 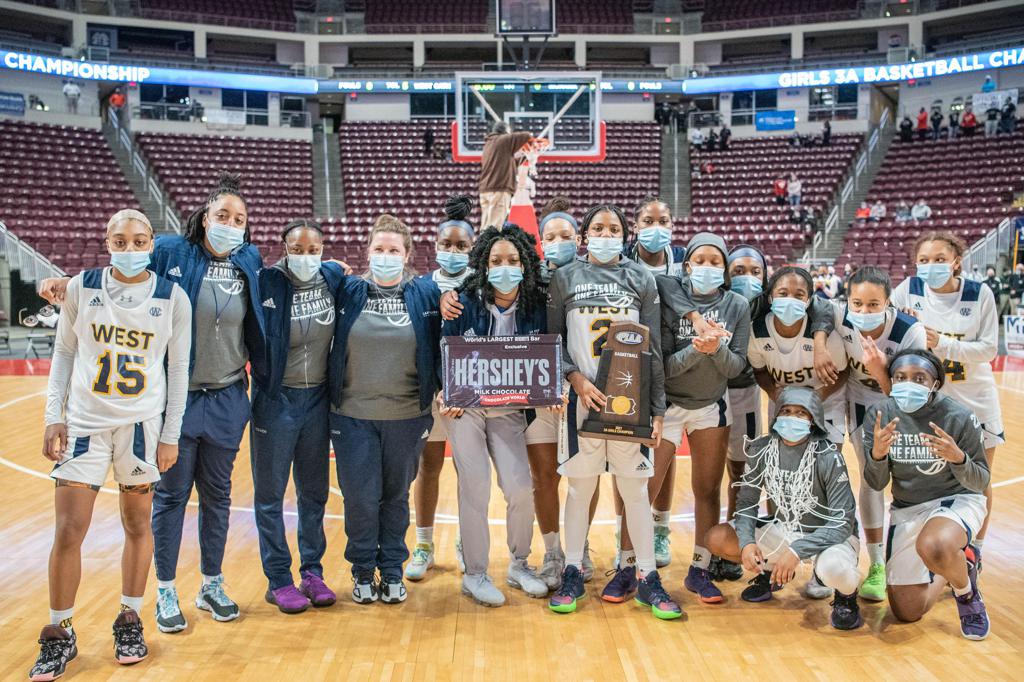 The fourth quarter was more of the same. Whenever Mohawk made a dent, the Lady Burrs answered behind Montgomery’s 10 points and McPhaul’s nine.

“This wasn’t one of our ideal games,” said Osueke. “Mohawk had a really good game plan against us. They neutralized Destiney, a nationally ranked player. Other people stepped up. I was encouraged by what I saw. I am really proud of my team. I definitely saw our growth in this game.

This year’s Catholic League Most Valuable Player, McPhaul still finished with a pivotal 16 points, 11 rebounds, three assists, and two steals, which has basically been close to her norm since the halfway point of last year.

As she stood tall wearing a gold medal around her neck, the Virginia Tech signee felt grateful.

“I told Ciani, ‘When we come down, you have to take over,’” said McPhaul. “She listened to me and she did what she gotta do. I’m happy that she did it for us.”

In an emotional post-game speech, Osueke spoke less about basketball and more about character, perseverance, and self-respect. Taking the messages to heart, the Lady Burrs remained virtually silent while listening to their mentor, who minutes earlier had become the first Black female coach to capture a PIAA state basketball championship.

“All of those girls have such bright futures,” said Osueke. “If anyone tries to tell them anything other than they’re great, they know they’re lying. I’m so proud of them. I’m so happy for them and their families. I’m so glad they came along for the journey.”

What a journey it was.