PHILADELPHIA – When Beulah Osueke inherited the West Catholic High School girls’ basketball program in 2013-14, the Lady Burrs were not considered among the Philadelphia Catholic League’s elite.

It took a little while, but over the past two years, everything changed.

West Catholic won its final 11 games last winter, highlighted by a scintillating 65-60 overtime triumph over top-seed Archbishop Wood in the PCL championship at an electrified Palestra, the first West hoops title in 22 years. Then the Lady Burrs were on their way to capturing the PIAA Class 3A title before the coronavirus cancelled the tournament before the quarterfinal round.

Today, Osueke advised her players that she would not be returning as coach next season. Her final record of 80-72 includes a 2020 Catholic League championship, a 2021 Class 3A state crown, a loss in the 2018 state final, and six District 12 titles.

Though difficult to resign from a position she has cherished, the reigning Class 3A Coach of the Year is at peace with her decision, which followed significant discernment. A full-time strategic operations director for a nonprofit organization, Osueke plans to remain heavily involved in basketball and may return to coaching at a later time.

Beulah Osueke led the Lady Burrs to win the Philadelphia Catholic League Championship at the Palestra in 2020:

Almost as though she is figuring out a strategy to defeat an upcoming opponent, Osueke’s mind percolates with possible future endeavors, including a rollout for a special project that will be introduced this summer.

“The sky is the limit,” she said. “I’m very excited by the possibilities.”

Recognizing her roots has helped shape Osueke’s foundational beliefs in justice, equality, integrity, and above all else, accountability. No stranger to racial tension and partiality, Osueke is never afraid to employ a full-court press with uncomfortable issues. Honest dialogue, she says, works wonders.

“I loved coaching West Catholic basketball,” said Osueke, 30. “I love and respect all of our players. I can’t thank them enough for trusting me and believing in me.”

When talking to West’s players, that feeling is mutual. 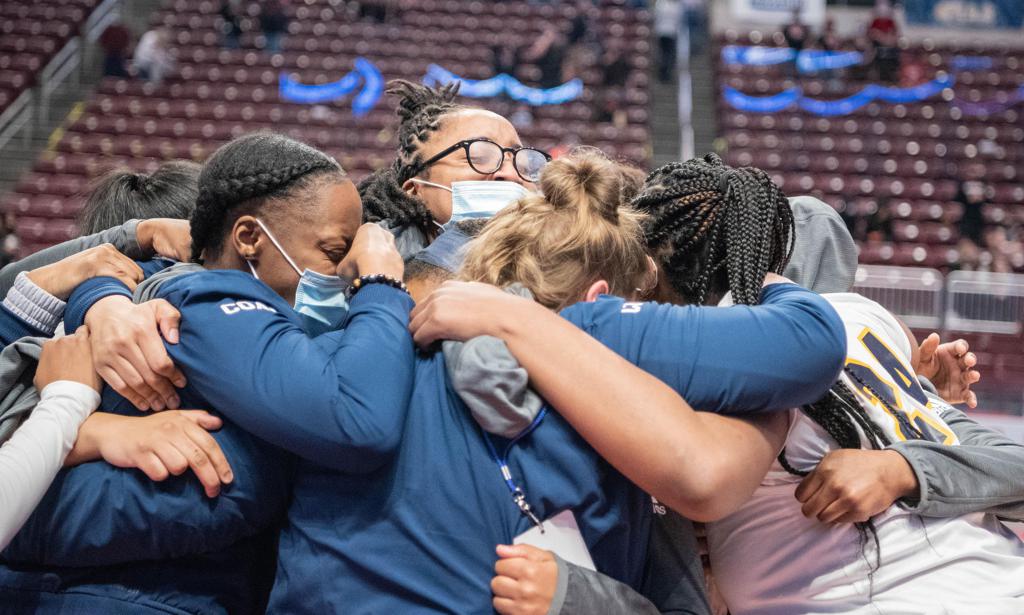 After almost every key West Catholic victory the past two years – and there have been many – one of the first comments from players included a message of appreciation for their coach.

After her incredible 34-point effort that ignited West’s state title, the first words from senior Ciani Montgomery were telling.

“I’m just happy we got the ‘dub’ for my team and my coach,” said Montgomery. “In these four years, we just pushed through it. I love them so much. All the hard work paying off is all that matters.”

Hard work has been Osueke’s staple since her early days. Born in Houston, Texas, and raised in a nearby suburb, Osueke earned an undergraduate degree in psychology from Ouachita Baptist University in Arkadelphia, Arkansas. She later moved to Philadelphia and attained a master’s degree in clinical psychology at La Salle University.

After accepting an offer to coach West Catholic basketball, Osueke first needed to instill a foundation of trust and – here’s that quality again – accountability. Though integral and special, basketball would always be utilized as a beloved tool to harvest more important life qualities.

Par for the course with coaching, some of Osueke's decisions were met with early disdain. Last year, the Burrs had just lost to Archbishop Carroll, 60-46, and they had played without their best player, then-junior Destiney McPhaul, who had displayed signs of a concussion.

With a subpar 3-4 record and having been outclassed in three of the defeats, West Catholic’s season appeared on the brink of disaster. Though she was upset about not playing, McPhaul acquiesced to her coach’s decision with eventual aplomb.

“The maturity that she showed to cheer the team on, despite not being able to play and contribute, showed me that she’s growing,” said Osueke.“The players that were out on the court didn’t complain. They didn’t moan. They played the game.

“That maturity and their belief in me to not question my judgment and not get mad, to not be bratty because I made the decision for the health of one of our players long term, means all the world. From there I saw them jell together.”

West didn’t lose another game the rest of the way.

“What you and your players have done for your program and school is remarkable and inspiring,” said McDonald. “Congratulations and thank you for representing our league tremendously.”

Osueke responded with a tweet of her own, thanking McDonald and the Vikings for “an excellent game last night and for consistently setting the standard so high.” She then wished the Vikings best of luck in district and state tournament play.

This season, the Lady Burrs lost significant preparation time because of COVID protocol, including a two-week quarantine. Initially, they showed understandable fatigue and impatience and nearly lost their opener. In time, however, West Catholic retained its footing in the PCL’s battle-tested Red Division, where Archbishop Wood, Cardinal O’Hara, Archbishop Carroll, and Neumann-Goretti posed as particular threats. Playing in its own gym, O’Hara ultimately defeated the Lady Burrs in the semifinals.

As she did after winning the PCL last year, Osueke waxed emotional following the state championship. Standing in front of the respectfully awaiting Lady Burrs in a makeshift locker room near the Giant Center main floor, Osueke reminded them they have bright futures.

“If anyone tries to tell you anything other than you’re great,” she said, “they’re lying.”

Standing in a nearby hallway, Osueke thanked the late Akyra Murray for believing in her, and she dedicated the state title to Ms. Murray’s memory.

Less than a week after graduating third in her class at West Catholic in 2016, Ms. Murray was the youngest of 49 people killed by a deranged gunman at a nightclub in Orlando, Florida. A 1,000-point scorer and the first standout performer during Osueke’s tenure, Ms. Murray was planning to play basketball at Mercyhurst University in Erie.

“When I heard what happened, I collapsed,” said Osueke. “My dad died when I was 11, but my heart had never been broken the way it did when I learned that Akyra was no longer with us. I spent the following months after her death hollow, unable to recognize myself. I felt lost. It was devastating.”

“I promised her,” said Osueke, “that I would make the program something to be proud of.”

Beulah Osueke delivered . . . and then some.