Due to Covid-19, the Inter-Academic League decided to host a postseason tournament for their spring sports which included softball, baseball, boys and girls lacrosse, boys tennis, boys and girls track and field and girls golf.

Seeding for the the Inter-Ac softball tournament was determined by their coaches and listed below: 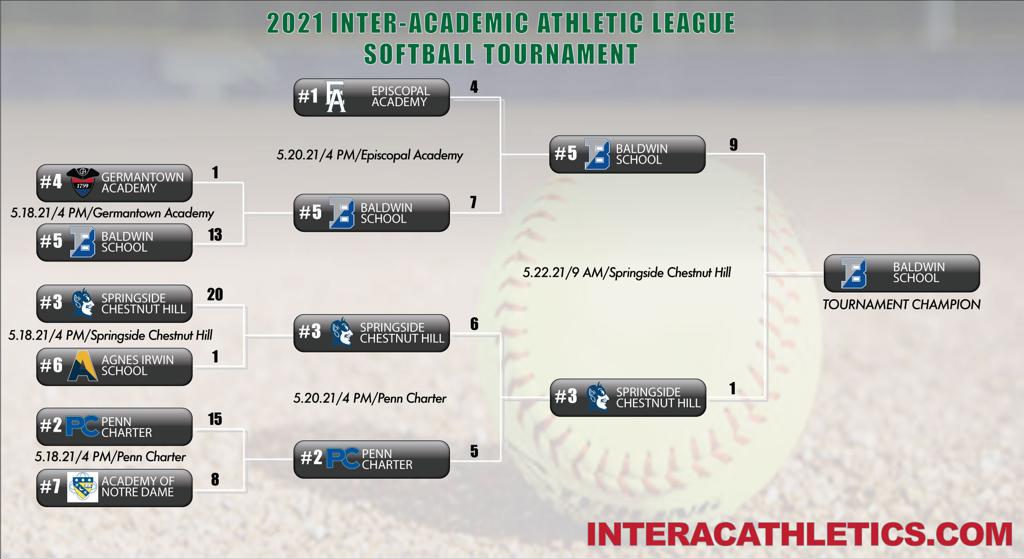 PHILADELPHIA – Asked what she would remember most about the best game of her young career, Joelle Pearlstein didn’t hesitate.

“The pitching,” she said.

Good answer, though “hitting” also would have been quite appropriate. 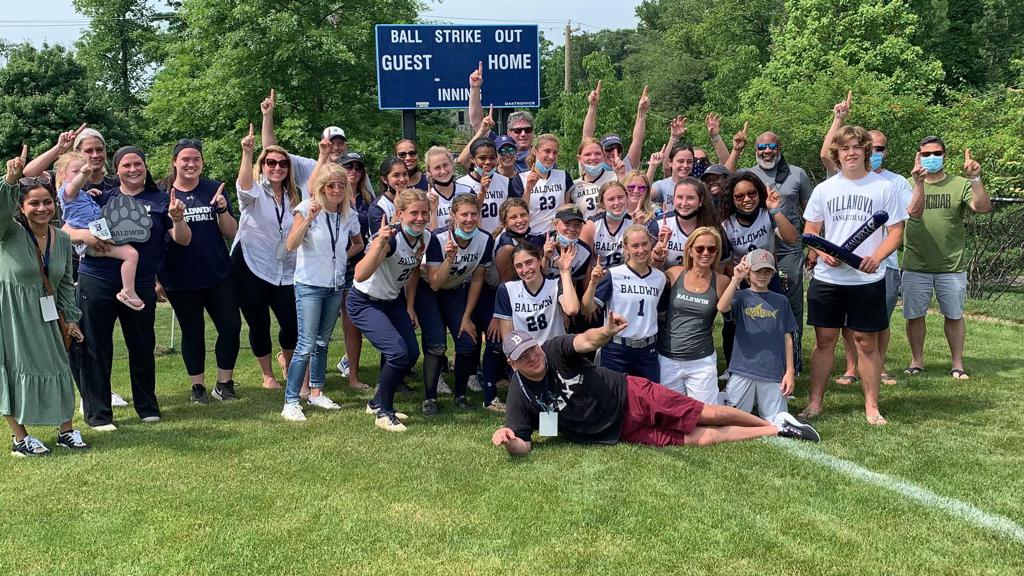 Pearlstein took a shutout into the seventh before allowing a run. She finished the game – and season – with a strikeout. As the game continued through muggy conditions and a temperature that reached a scorching 90 degrees, Pearlstein actually appeared to get stronger as the game continued.

“Usually in the first inning, I pitch more balls than the rest of the innings,” said Pearlstein, who specifically credited her catcher, freshman Allie Weiser, for her leadership and blocking skills behind home plate. “I get angrier. I have more grit. I think, ‘I can’t let them score this inning.’ I have to pound it in there and hope they can’t hit it.”

Hard-hitting SCH struggled most with timeliness. The Blue Devils put runners on base in every inning, but they squandered 11 runners, five over the past two innings.

Though they also left 11 runners on base, the Polar Bears scored four in the first, two in the second, and one each in the third, fourth, and seventh. Pearlstein knocked in the first run with a double. In five at bats, she finished with five hits, three runs scored, and three straight doubles.

Baldwin pitcher Joelle Pearlstein talks about her most memorable moments from the game:

Teammate Weiser brought the ecstatic Polar Bears’ out of the dugout after she lofted a three-run homer in the first.

Baldwin’s only seniors, Tessa Pearlstein (L) and Presley Daggett (R) are ecstatic about how season ended:

Weiser raved about her battery mate.

“Joelle’s pitches are spot on,” said Weiser. “It’s amazing to catch her. She is like grit all the way. She gets better and stronger and works harder every pitch.”

Eight different Polar Bears contributed to Baldwin’s 14-hit attack, and six scored runs. Among them were sisters Blake and Charly Landow. The former, a junior leadoff center fielder, went 2-for-4 and scored a run; the latter, an eighth grade second baseman, singled home a pair of runs in the second inning.

Baldwin, which entered the seven-team tourney seeded fifth, knocked off four-seed Germantown Academy in the quarters, top-seed and undefeated Episcopal Academy in the semis, and three-seed SCH in the final.

For the team’s lone two seniors, winning the tourney as a heavy underdog furnished quite a curtain call.

“This is probably the last softball game I will ever play,” said Presley Daggett, a third baseman who got on base three times, scored two runs, and will play tennis at Franklin & Marshall University. “I’ve been on this team since middle school. This is the best way it ever could have ended.”

Classmate shortstop Tessa Pearlstein, who was on base twice and scored a run, thoroughly enjoyed watching her freshman sister maintain discipline and fortitude while competing against a potentially explosive opponent during two hours of scolding hot weather.

Pearlstein will be playing softball at nearby Haverford College.

“I’ve seen her come a long way,” said Pearlstein. “I catch all of her pitching lessons. It was amazing to see.”

Though the Polar Bears captured championship honors by defeating three teams, it does not count as an Inter-Academic League title. Because of COVID concerns, the league had announced before the season that an official champion would not be determined.

If they had, then Episcopal Academy – which went 10-0 during the regular season – would have been bestowed that honor. EA’s only loss occurred in the semifinal tournament against Baldwin, the only squad that came close to beating them – an 8-6 EA victory on April 30. Take away that game, EA outscored its regular-season competition by a scary 99-8.

Though beating SCH for the post-season title was priceless, most if not all Polar Bears pointed to their 7-4 semifinal win over EA as the defining point and highlight of the season. 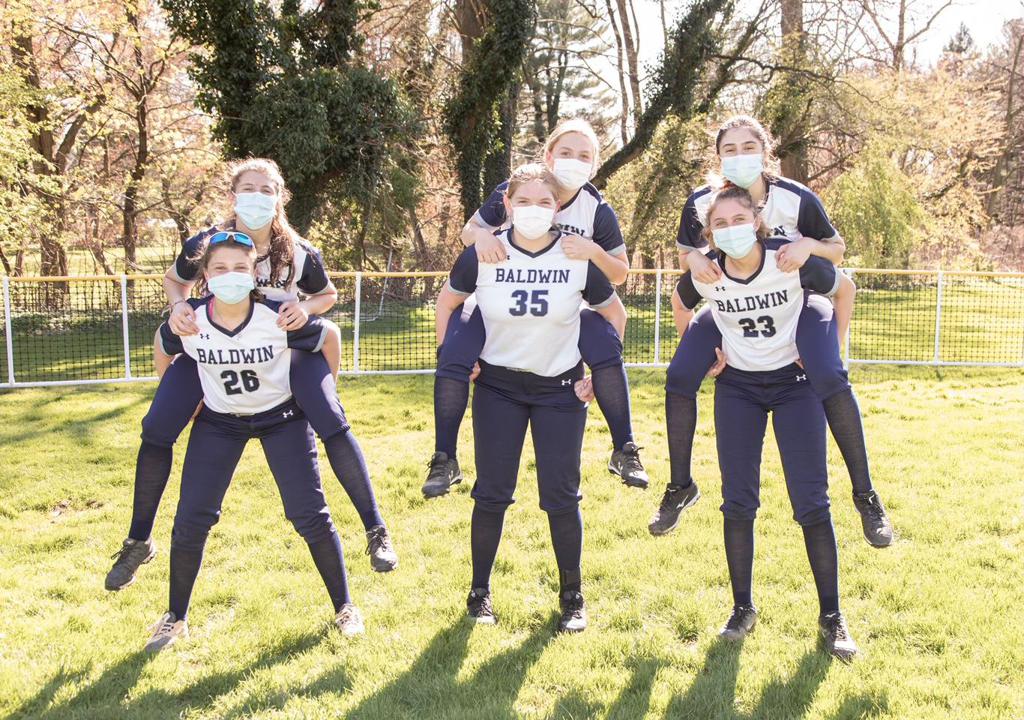 Trailing 4-3, the Polar Bears took the lead with a four-run sixth inning. Pearlstein again excelled on both the mound – one earned run, one walk and eight strikeouts in a complete game four-hitter – and at the plate by going 2 for 4 with an RBI and run scored.

The last out of the game came courtesy of a diving, sliding grab in centerfield by aforementioned Blake Landow.

“I wanted to get that out wherever it went,” said Landow. “I got a great read off the bat and just went all out for it. It’s pretty special to have Tessa right there jumping on me. Tessa has been my little league, club, and school teammate for nearly 10 years. And of course, having my sister right there, too, was amazing. This is the first season we’ve ever gotten to play together, since she’s only in eighth grade.

“This is a truly special team and I’m happy to contribute in any way I can. EA obviously had a phenomenal season. Our team played incredibly well. We had a lot of momentum by the seventh inning. Their side was pretty shocked and silent once we took the lead in the sixth.”

Several Polar Bears lauded Baldwin coach Samantha Esque for their turnaround. Though they finished in fifth place with a 4-6 Inter-Ac record, four of those losses were by a composite margin of only nine runs.

By the end of the season, the Polar Bears had gained confidence and were no longer surprised by their success.

“The girls put in the hard work and we learned that little things really matter, and it paid off,” said Esque. “I am so proud. I am ecstatic. Just so thrilled for them and their families.”

As they left the field to celebrate with their families on the other side of the right-field fence, someone asked if they would be given a trophy or a plaque.

Nobody knew. And at that point, nobody cared. The adjacent scoreboard supplied the only reminder that mattered.