PHILADELPHIA – Penn and the rest of its Ivy League football competitors have had to display extreme patience. While most Football Bowl Subdivision and Football Championship Subdivision programs had a semblance of a season either last fall or spring, Penn and its Ivy League opponents stayed on the sidelines.

Now that wait is about to end.

Penn opens its season on Saturday in a non-conference matchup at Bucknell. It will be the Quakers’ first game since a 28-7 season-ending loss to Princeton on Nov. 23, 2019.

That is 665 days without football, but who’s counting.

For one, veteran football coach Ray Priore, who enters his sixth season with a 31-19 record at Penn.

“It is really exciting,” he said after practice on Monday at Franklin Field. “We have been without it a really long time, 665 days to be precise. On Saturday it will be our first time back in a long time and I think the coaches and players, we want to make sure we control our excitement...”

Good luck with that.

Penn also has another source of motivation – the Ivy League preseason poll. In that poll, the Quakers were picked to finish fifth in the eight-team league.

Princeton was the favorite, and 2019 champion Yale was picked second.

Then again, Penn likely doesn’t need any extra incentive. Just getting back to the field is more than enough.

Due to the pandemic the Quakers didn’t compete last fall but at least they got to practice this past spring.

“The spring was a normal spring, so we were able to get in our normal spring practices and workouts with the kids, so we have been on a pretty normal schedule since February,” Priore said.

The top priority in the spring and then spilling into training camp this month, has been naming a starting quarterback.

His lack of game experience wasn’t a detriment because none of the quarterback candidates had ever seen the field in a college game. 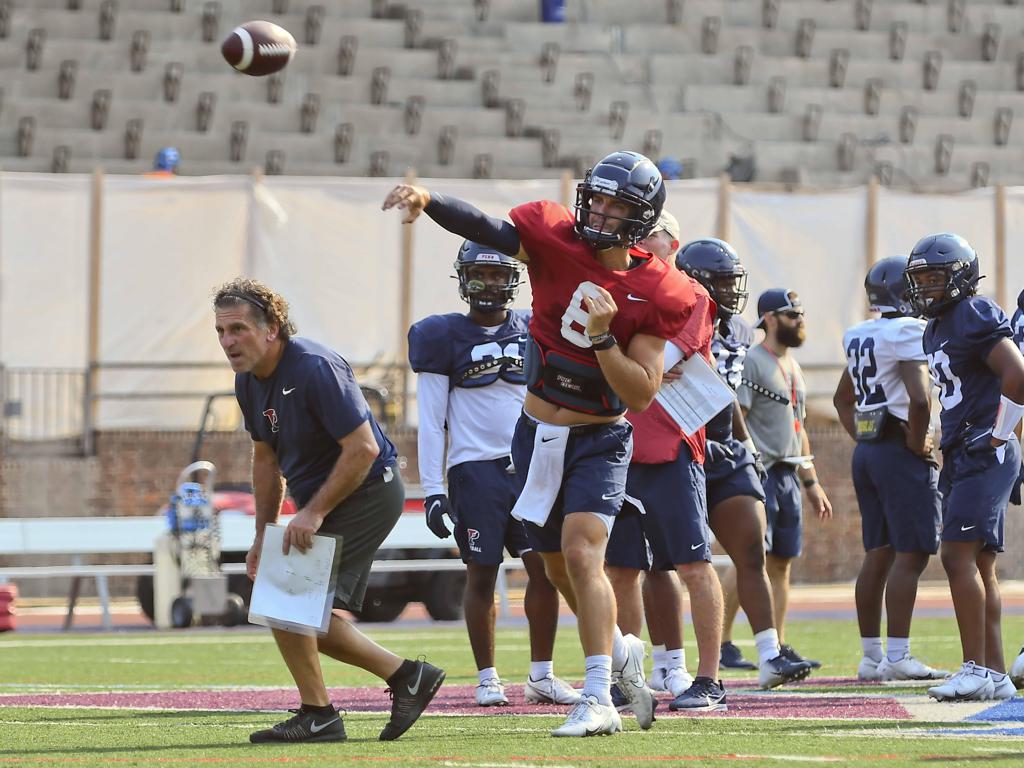 “John has been a young man in our program for the last four years, with a great level of experience,” Priore said. “Unfortunately, (2019) he didn’t play but in the spring he and the other four quarterbacks did a great job battling through camps and it really went down to the wire.”

The fact that he has been in the program for a long period of time, played into Quinnelly’s favor.

“At this point he gives us the best opportunity to win on Saturday, but there are talented kids behind him, but we feel his maturity, experience and how he throws the ball was one of the reasons we went this way,” Priore said.

One of the key players on the offense will be graduate student Isaiah Malcome, a 5-5, 170-pound blur of a back from Atlanta, who is also a serious special teams threat.

For Malcome, this will be almost two years since his last game. In 2019 he appeared in one game before suffering a season-ending injury the next week in practice.

He made a major impact in that one game, rushing for 73 yards on nine carries, scoring on a 1-yard touchdown reception and a 69-yard touchdown on a punt return in a 28-27 opening day loss to perennial FCS playoff contender Delaware on Sept. 21, 2019. That was Penn’s first punt return for a touchdown since 2010.

“It feels feels great especially after being sidelined for a year just from my injury but then also through COVID,” Malcome said. “It’s nice to be out with my team and being able to grind and be able to actually prepare for another game...”

Bucknell, which is 0-2 with losses at Sacred Heart and at Villanova, will have to account for Malcome each and every time he is on the field.

“As a threat on the field, Isaiah has been proven to be able to make those big plays throughout his career, but he brings along great leadership as well,” Priore said. “He has great poise and we can play him in the backfield, in the slot and just do so many things with him, he’s really quick, has a great burst and can be a home-run hitter for you.”

One of the players who has to stop the home runs is linebacker Brian O’Neill, a 6-2, 240-pound graduate student, who was a second-team all-Ivy League selection in 2019 after recording 58 tackles, including 12.5 for loss and a team-leading three interceptions. He also started all 10 games in 2018 and was third on the team with 57 tackles and second with 9.0 tackles for loss.

“Brian is one of those players who has been on the field (a lot) he’s got great experience and we hope he can lead the guys, just do his job, show poise when we need it in those tough times,” Priore said.

O’Neill, who hails from Roseland, New Jersey and attended West Essex High, summed up the feeling of the team as they anxiously return to playing for keeps.

“It has been a while, a grueling year and a half,” he said. “I am just thankful to have this game coming up.”