College: A Rough Go for Temple Against the Power 5 Portion of the Schedule

PHILADELPHIA – Temple football coach Rod Carey usually doesn’t mince words when analyzing his team. His evaluation of the offense after Saturday’s 28-3 loss to Boston College at Lincoln Financial Field in a clunker of game was succinct and to the point.

“Everybody played bad on offense,” Carey said after the Owls had fallen to 1-2.

The defense, while far from perfect, had many more positive moments and right now is ahead of Temple’s offense, although at this point it doesn’t take much to be in the lead.

So where does Temple stand at this point?

The Owls have played two Power Five teams and have been outscored by 72 points.

Rutgers 61, Temple 14 in the opener and now the loss to Boston College.

This on a day when Boston College threw for a total of 34 yards.

While playing up in competition is good to prepare for a team’s conference schedule, the Owls have at least one team (Cincinnati) if not more on their American Athletic Conference schedule that is better than both Rutgers and Boston College.

After a 1-6 record last year when COVID issues and injuries plagued the program, this was supposed to be a fresh start and maybe the Owls will turn things around, but this has not been a good first month of the season so far.

In addition to going 1-2 with a win over an Akron team that lost to Auburn and Temple by a combined 71 points before beating FCS Bryant 35-14 on Saturday, the Owls now face their own FCS opponent when they host Wagner on Saturday.

So it’s likely that they will be 2-2 beginning their AAC schedule, but the Temple fan was originally hoping the Owls could steal one from Rutgers or BC.

Adding to the rough month is that three of the top AAC football schools – Cincinnati, UCF and Houston announced they will be leaving the AAC to join the Big 12.

The AAC is by far the best Group of 5 football conference in the country, but that status will be severely threatened without the three aforementioned teams. That’s another story for another day.

The fact that Temple didn’t win against Rutgers or Boston College is not as bad as the fact that the Owls weren’t competitive.

For the second straight year, the Owls are having problems at quarterback. Freshman D’Wan Mathis, a transfer from Georgia who came with considerable hype and rightly so, suffered a lower body injury in the opener against Rutgers. After the Boston College game, Carey gave this update on Mathis: “It is the type of injury where you get the first 80 percent back and then the next 20 is really hard.”

Mathis struggled in his Temple debut, completing just 8 of 24 passes for 148 yards and an interception against Rutgers.

He has been replaced by true freshman Justin Lynch. Carey had coached Lynch’s brother Jordan when he was the head coach at Northern Illinois. As a senior in 2013, Jordan Lynch finished third in the Heisman Trophy balloting behind winner Jameis Winston of Florida State and A.J. McCarron of Alabama.

The talk of Temple’s preseason was the Justin Lynch, who at 6-foot-1 and 210-pounds is tougher than a three-week old steak, but needs plenty of refinement as all true freshmen do.

Lynch’s first inclination is to run when there is any type of heat in the pocket and against Boston College he ran 21 times for 27 yards.

It doesn’t matter what level a team is, if there is inconsistency at quarterback, it’s difficult to win. Then again Boston College was without redshirt junior quarterback Phil Jurkovec, the Notre Dame transfer, who is out for the season after wrist surgery. Jurkovec, who enjoyed a strong first season a year ago at Boston College, was considered a potential outside Heisman hopeful. 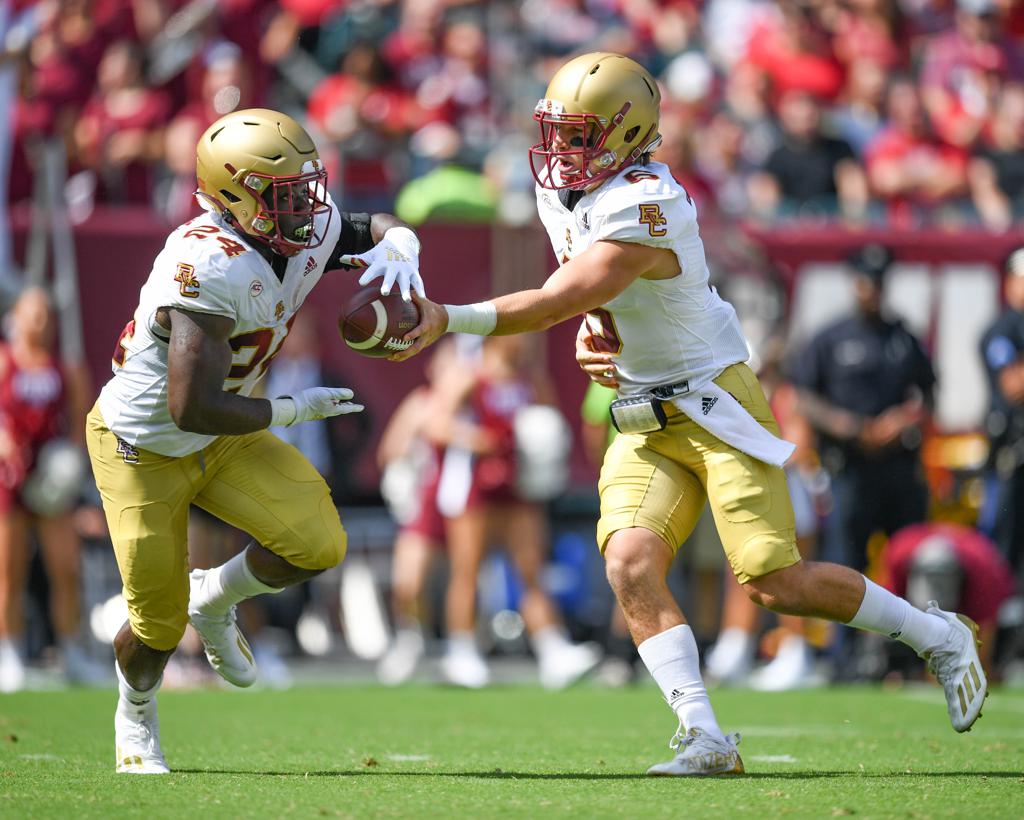 Boston College QB Dennis Grosel hands the ball off to running back Pat Garwo, a local standout from Conwell-Egan High School, who had 16 carries for 49-yards and a touchdown. - PSD Photo by Mike Nance

His replacement was Dennis Grosel, who didn’t inspire a lot of confidence in his coaches against Temple.

After the Boston College coaches realized that Temple would struggle to move the ball, let alone score, they took the ball out of Grosel’s hands. In these pass-happy times in college football, Grosel attempted just 13 passes and threw for the aforementioned total of 34 yards.

Still it was more than enough.

For Temple it is more than the quarterback situation, although that will always get the most focus.

Special teams, a sore point since Carey’s first season at Temple in 2019, continue to struggle. Boston College’s Travis Levy returned the opening kickoff 67 yards to the Temple 29 yard line and the Eagles would score a touchdown three plays later which would prove to be more than enough offense on this day.

Penalties continue to hurt the Owls. They were penalized 11 times for 66 yards against Boston College, which had just two penalties for 25 yards.

The hope, if you are a Temple fan is that the Owls benefited from playing these Power 5 schools, which exposed the weakness they will have to work on in their conference schedule.

Actually it is the case, but the real question is whether the Owls learned from these two drubbings or whether it will be a sign to come once the AAC schedule starts.