COLLEGE: Villanova Will Try to Treat a Trip to Penn State as Just Another Game, But it Will Provide Life-Long Experiences for the Wildcats

VILLANOVA, PA –  Villanova football coach Mark Ferrante was saying all the right things when asked about his David vs. Goliath role when the Wildcats visit Penn State on Saturday.

“I’m not a moral victory guy, and our staff is not into a moral victory type of staff and I don’t think our players are either,” Ferrante said during Monday's Colonial Athletic Association conference call.

Nobody should expect Ferrante to say anything else, but the fact remains that he is in a no-lose situation and there is plenty of room for moral victories if the real kind isn’t achieved. Football Championship Subdivision (FCS) teams like Villanova play Football Bowl Subdivision (FBS) teams like Penn State all the time. 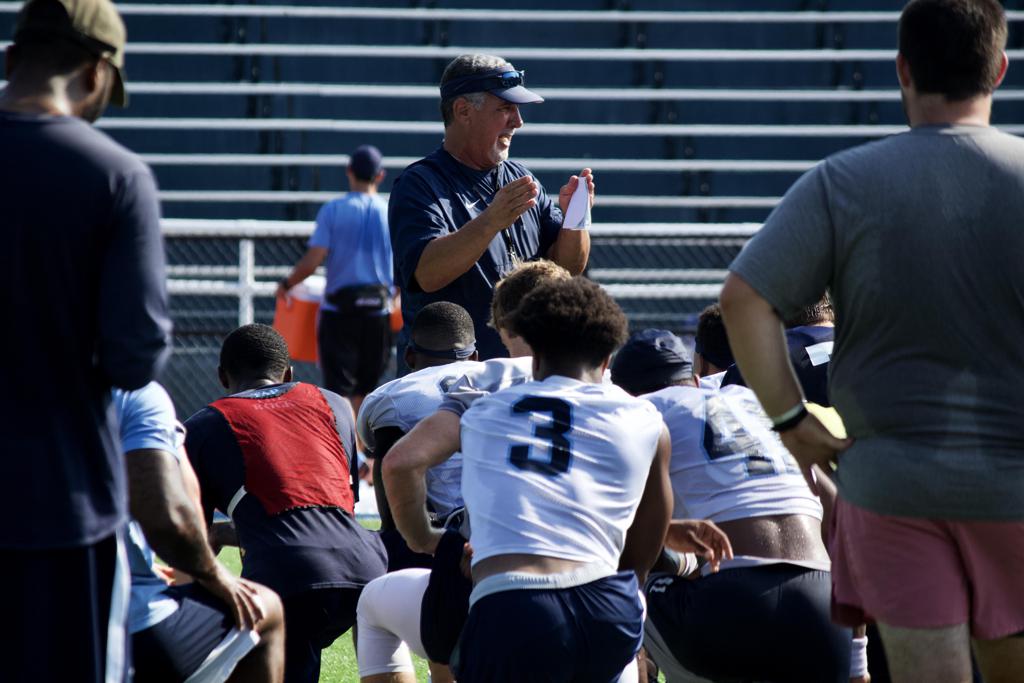 The strategy is pretty straight forward.

FBS teams are looking for a so-called automatic win, while also getting to fill the stadium. The FCS teams usually get a hefty guarantee to visit the FBS opponent and serve as the proverbial punching bag.

Of course there have been many instances this year alone when the FCS team has risen to the occasion. Just ask Florida State, which lost, 20-17 to FCS Jacksonville State.

Actually one can ask Villanova.

The last time the Wildcats faced an FBS school, they came out a winner. In the opener for both teams in 2018, Villanova beat Temple, 19-17 at Lincoln Financial Field.

Keep in mind that was a Temple team that finished 8-5, and beat then No. 24 Cincinnati. Villanova, which was plagued by injuries that season, ended just 5-6. Still, that opener was a big win for the program.

What is different this year is that Penn State is playing like we usually expect the Nittany Lions to perform.

Penn State is 3-0 with an impressive road win at Wisconsin and last week’s 28-20 victory over Auburn before a white-out crowd of 109,958 at Beaver Stadium

That was the ninth largest crowd in Beaver Stadium history. It’s hard to imagine eight games had bigger crowds, but Penn State is State College’s version of the Eagles and there is a lot of interest. 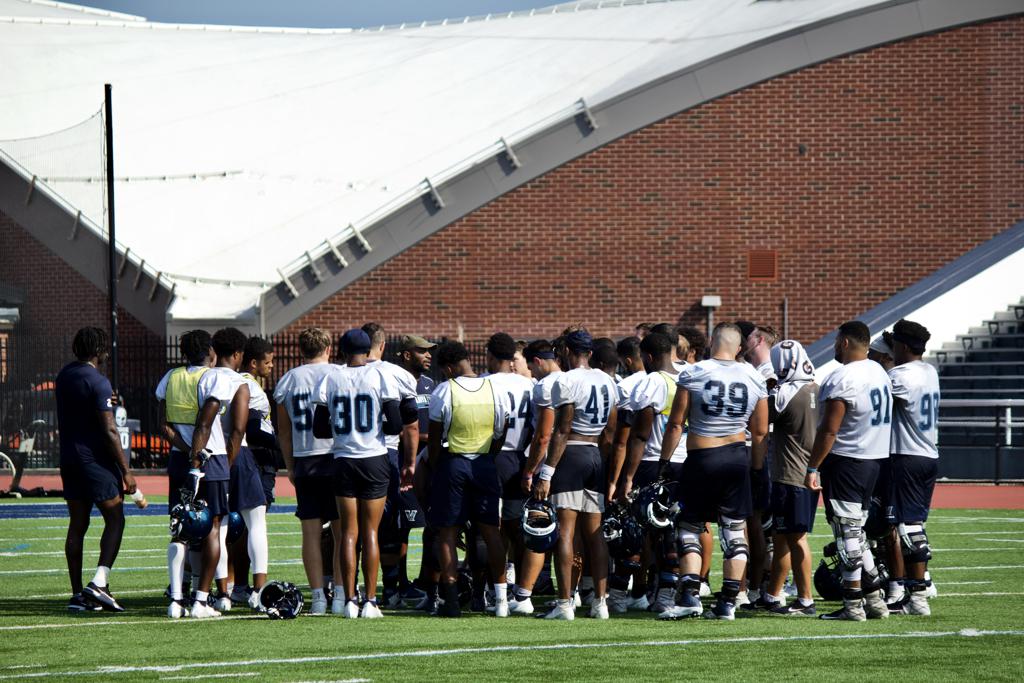 Villanova is currently 3-0 and ranked No. 7 in the latest American Football Coaches (FCS) poll - PSD Photo by James Williamson

We’re sure many Penn State fans, will feel this week will be a breather. According to SI Sportsbook, Penn State is a 29-point favorite and with good reason.

Yet Villanova is not fodder. The Wildcats (3-0) are coming off a wild 34-27 Colonial Athletic Association win over Richmond.

Villanova led 13-0, then trailed 27-13 after yet another Richmond touchdown with 9:02 left. From there the Wildcats scored 21 unanswered point to stun the visitors before a sellout crowd of 12,001 at Villanova Stadium.

Keep in mind, even with the loss, Richmond is ranked No. 21 in the latest American Football Coaches FCS poll. (Villanova is No. 7).

Still, this is nothing but positive for Villanova. They face a Penn State team coming off an emotional national television win over a team from the big bad SEC.

If ever a team would be in for a let down, it is Penn State.

Villanova, as the saying goes, is playing with house money.

That said, the Wildcats don’t want to get blown out, regardless of the strength of the opponent.

Ferrante said there were no moral victories, but if Villanova is competitive and say, loses by two touchdowns, one has to think the Wildcats faithful will feel pretty good about things.

Dan Smith, Villanova’s graduate school quarterback, who was just named the CAA’s co-offensive player of the week, says this is business as usual.

“It is like any other game,” Smith said in a phone interview. “It obviously will be a bigger crowd in a bigger stadium against a team we haven’t seen in a long time.”

Then Smith showed a true sense of confidence.

“They are just another team,” Smith said. “They put their pants on the same way we do. We will try to use our advantage to benefit us and see if we can win a football game.” 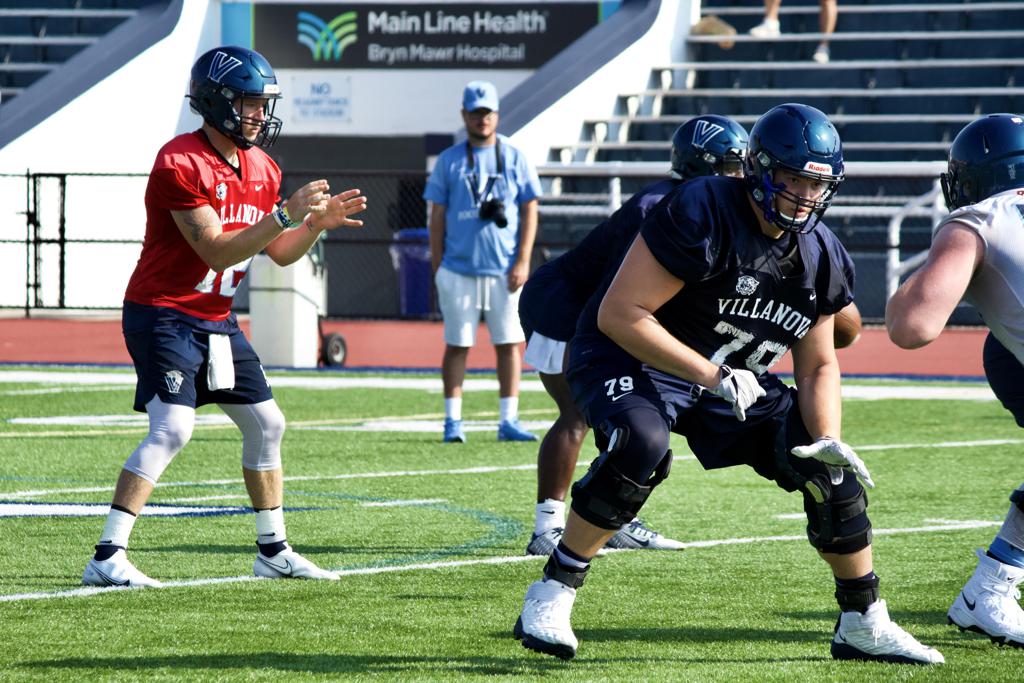 Smith began his career at another FCS school Campbell. He amassed 5,411 yards of total offense with 25 rushing and 31 passing touchdowns before joining Villanova in 2019. While at Campbell he played against one FBS team. In 2018 Campbell lost 58-21 to Coastal Carolina. Campbell trailed just 24-21 at halftime before the winners scored the final 34 points in the second half.

Now, he knows the stage will be the biggest one he has ever performed on, but Smith insists it should not affect his mindset.

“You’ve got to play loose and can’t get nervous,” he said.

Good luck with that.

Ferrante says Villanova won’t change its approach to practice, but there are some slight differences. There will be more noise at practice to attempt to simulate the huge crowds.

In addition, there will be a pre-game visit to the stadium the day before.

“We traditionally don’t go to the visiting stadium on Friday but we are going to go and just do a quick walk-through just to kind of get the ohhs and ahhs out of the way, you know when you look up into the sky and see the seats and see how high they go...”

Even though Villanova will do its best to treat this as any other game, it won’t be.

“It is something I will definitely always remember,” Smith said. “It’s a great opportunity but what would make it most memorable is if we beat them.”