Pick One: Avoid Throwing against the Guys Wearing Black and Red

Each of the pass thieves was asked to describe his legal lawlessness.

“I remember my coach telling me go out and make a play and that we needed a big bang to get the team hype, and I did that. I remember catching the ball and following Joe (Mastrangelo) across the field. It was about a 30-yard return to our own 10. As soon as I got up, I just told my offense to go finish it and keep the momentum up.”

“It was late in the fourth quarter and I was in at outside linebacker. I remember the quarterback under pressure. I stayed back in my zone and I saw the ball in the air wobbling and falling straight towards me. All I could think was, ‘Don’t drop it.’ Once it fell into my hands, I fell to the ground and realized I caught it. The best part of it all was the celebration after.”

“What I remember is just dropping back and reading the quarterback’s eyes and right when he released the ball, I ran over and caught the ball at the highest point. I then just followed my blocks and picked up about 25 yards early in the fourth quarter.”

Bonner-Prendergast was already ahead of Blue Division host West Catholic by 20-0 at halftime, but the Friars ignored the scoreboard.

“When halftime hit, we went to the locker room and we sat in silence and listened to Coach (Jack) Muldoon,” said senior defensive back and wide receiver Armon Mapp. “He said, ‘Stay locked in. The game is not over yet. It’s a new half. The score is 0-0. We are not done yet.’”

Mapp followed his coach’s directives to the letter.

On the third-quarter kickoff, Mapp returned the boot all the way to the end zone.

When the Friars added a two-point conversion, they led, 28-0 before finishing a 28-6 win to raise their record to 4-1 overall and 2-0 in division play.

“When we walked out, I was thinking in my head that it was time,” said Mapp. “When they kicked the ball off, I caught it and saw a hole open up from (senior) David Washington and (sophomore) TJ Eulett and took the kick to the house.

“I knew I was definitely going to score at like the 30-yard line. When I got into the end zone, it was a lot of excitement going on. The first person I saw was my teammate Damir Williams-Bey running towards me yelling, ‘Let’s goooo!”

Williams-Bey had his own “Let’s goooo!” moment when the senior intercepted a pass in the second quarter.

After losing its first three games by a collective total of 17 points, Roman Catholic has captured two straight.

In a thorough 44-16 triumph at Penn Charter, a host of standouts contributed, particularly on offense.

“We started slow and we have to get out of that, but we picked it up,” said Roman coach Rick Prete. “Jon Ingram did an excellent job running the offense. Our defense stepped up at crucial times, we controlled the line of scrimmage, and our skill players made plays.”

Pick Four: In O’Hara Shutout, Not Much That Didio Didn’t Do

After shutting out visiting Lansdale Catholic, 21-0, for its second straight Blue Division win, Cardinal O’Hara has now surrendered a miserly seven points over the past eight quarters.

No one enjoyed the win quite as much as senior cornerback and wide receiver Frank Didio. Along with snaring an 11-yard touchdown pass, Didio returned an interception for another score.

“I was watching a lot of film and I knew that they like to run the backside hitch, and also my coaches were doing a great job of putting me in that position where I can make that play,” said Didio. “Once I saw him run the hitch and the quarterback’s eyes went to the receiver and he threw it, I jumped out in front of it and picked it.

“After that, my mind went to returning it. I saw that I had two guys to beat. I ended up breaking those two tackles and taking it into the end zone.”

O’Hara coach BJ Hogan appreciates his squad’s recent performances, but he is not quite satisfied.

“The defense has been doing a great job of bending but not breaking the last two weeks,” said Hogan. “We need to get better with our assignments, alignments, angles, and leverage to the ball if we want to play good defense. The last two weeks we have not given up any big plays.”

O'Hara's Brian Stratton walks us through the Lion's victory vs. Lansdale Catholic:

O'Hara's running back Danny McPhillips said the Lion's energy aided in the victory:

The Crusaders’ latest victim was William Tennent. Senior quarterback Mike Van Horn’s 10th rushing touchdown was all the defense needed in a 38-0 romp, thus improving Judge’s record to 4-1 overall, the most wins by the program since finishing with four in 2017.

“Tonight’s game was a great one,” said senior defensive lineman Shane Hartman. “The coaches gave us everything we needed to succeed. It felt great to be a part of the shutout with my family. Now we’re going to get better and prepare for next week.

“We had an interception and multiple sacks. We ran to the ball and played physical all game, and that’s what got us that shutout.”

La Salle’s 38-14 win at McDonough High (Md.) – which improved the Explorers to 5-0 with Red Division rival and four-year defending champion St. Joseph’s Prep (there was no championship in 2020) up next – produced copious highlights, none more entertaining than an 80-yard touchdown connection from scorching hot quarterback Alan Paturzo to running back Sam Brown. 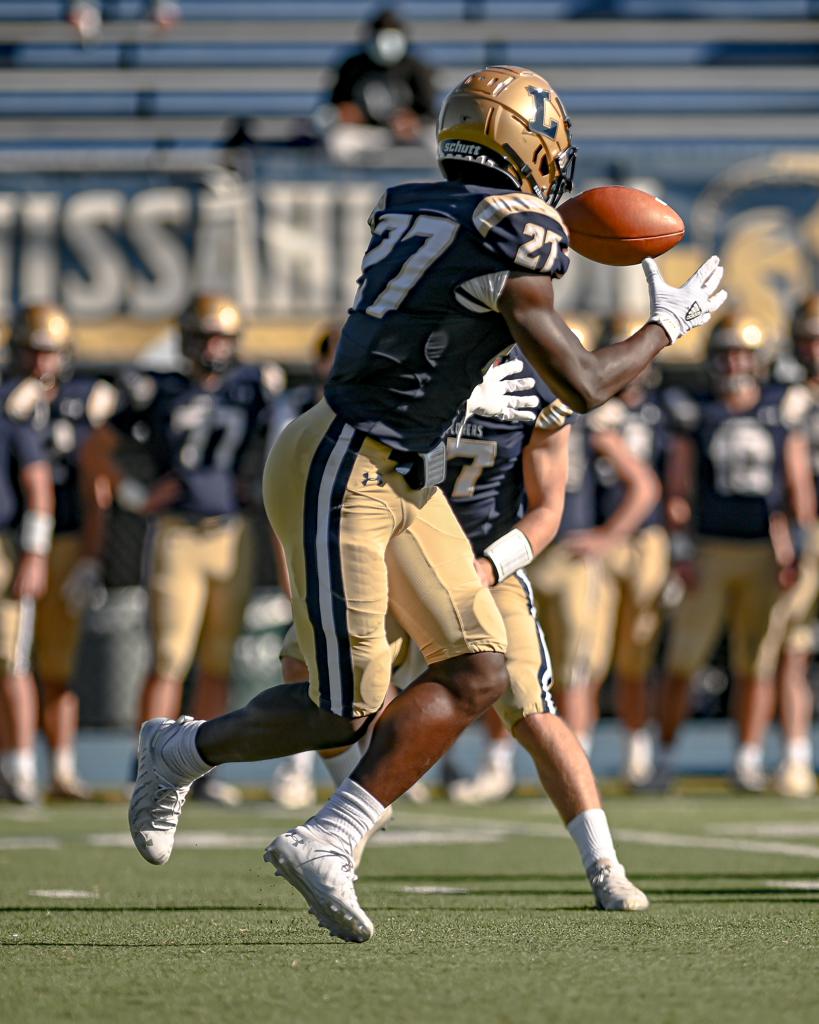 La Salle senior running back Sam Brown rushed for 65 yards and a touchdown on 11 carries in win vs. McDonough - PSD Photo by Mike Nance

The senior pair was unstoppable. Paturzo was nearly perfect, firing 14 completions in 15 attempts for 255 yards and a career best four touchdowns to improve his gaudy season stats to 53-of-75 for 650 yards and nine scores. Brown rushed for 65 yards and a touchdown on 11 carries, and caught two passes for 84 yards and the aforementioned touchdown.

“It was a great call by Coach (Joe) Wade,” said Paturzo. “The play was designed for Sam and it was executed perfectly. All I had to do was get Sam the ball and let him do the rest.

“It was actually a play action. We ran that play before multiple times, but never had Sam do the wheel off of it, which is why he was so wide open. I probably got the ball to him 20 yards down the field.

“We knew coming into the game what we were going to see out of them and all I had to do was execute, and that’s what we did. I was able to spread the love to four different guys. Just felt great to go out there and sling the ball. An amazing game from everyone, and I had great protection all day from my O-line.”

Though not sure, Brown thinks the 80-yard haul established a career high.

“It was a wheel route and we drew it up really well,” said Brown. “I had to make one guy miss and the rest was just vision and good blocking from our receiver Ryan Sorge (junior). I had a feeling once I made the first guy miss that I could score.”

And for the sixth time in Brown’s four games, that’s precisely what he did.