COLLEGE: Regardless of This Week's Outcome, Things are Looking up for Temple Football

PHILADELPHIA –For a program that had a rather uninspiring non-conference performance this year, following a forgettable 2020 season, Temple football can finally look ahead with optimism.

The Owls were soundly beaten by Power 5 schools Rutgers and Boston College and beat overmatched Akron and FCS Wagner to go 2-2 in the non-conference portion.

Temple then opened with one of the better teams in the American Athletic Conference in Memphis and another ill-advised slow start had the Owls trailing 17-0.

Yet from that point on, Temple turned things around in a big way, beating the visiting Tigers 34-31 in the American Athletic Conference opener for both teams.

Coaches like to suggest that each game is important, but even Temple's Rod Carey acknowledged in his Monday press conference, that this one might have carried a little more weight.

“I mean obviously we are aware of the difference between our previous week’s win (41-7 over Wagner) and this one in being a conference game and the opponent who it is,” Carey said. “We are very aware of that and we understand that it doesn’t change what we’ve been doing and saying and have to keep doing and saying, which, we have to go back to work on this thing and keep getting better.”

Coach Carey talks about the teams' attitude preparing for Cincinnati, then answers Marc Narducci's question about the importance of the Memphis victory:

Yes, but it’s easier to go back to work when the most recent result is so favorable.

So that was his way of saying that beating Memphis is a lot more meaningful than a victory over Wagner.

“We don’t address it, we don’t talk about it all the time, because really it is about our work, but yeah, I mean we don’t have our head in the sand,” Carey said.

While Carey won’t say this, we will – Temple could have turned its season and program around with the win.

Carey went 8-5 his first season with Temple in 2019, as the Owls qualified for a fifth straight bowl game. Last year with so many injuries and time missed due to COVID, Temple went 1-6.

Then came the first four games this season and nothing suggested that Temple could turn things around.

Yet they did so against a Memphis team that is 3-2 and has been to a bowl game for seven straight seasons.

This is a quality Memphis team and for the Owls to win was no small feat. 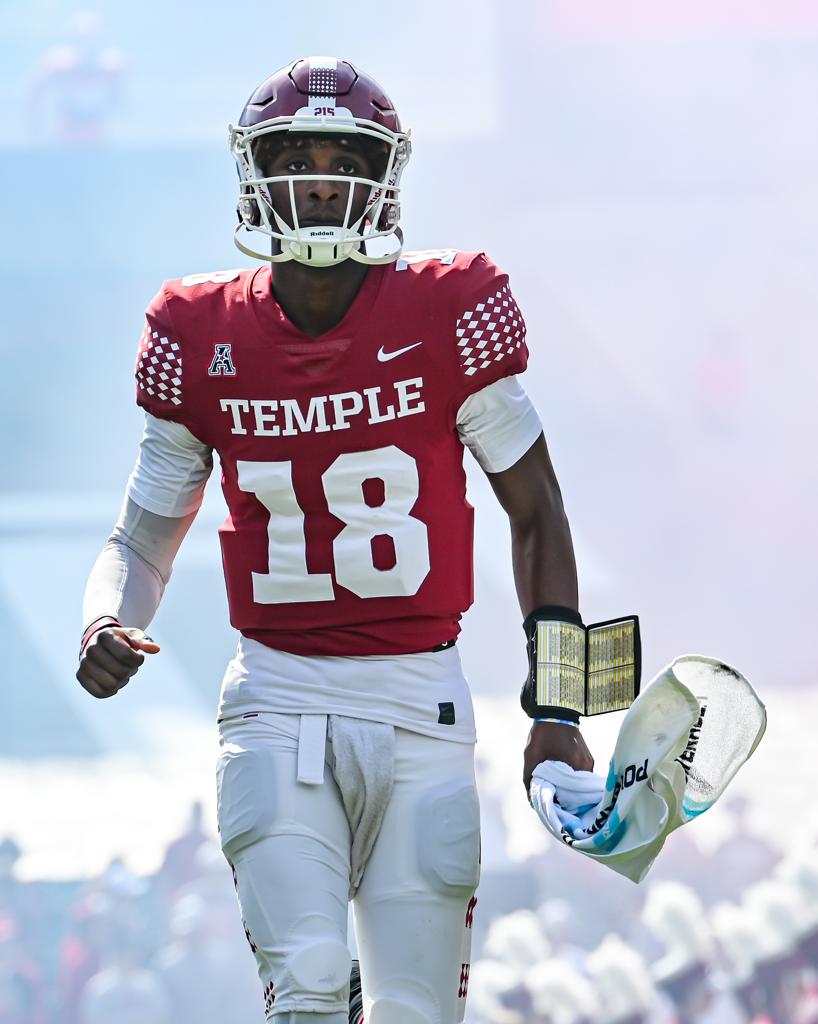 What also has to be encouraging is that redshirt freshman quarterback D’Wan Mathis, who hurt his ankle in the opening 61-14 loss at Rutgers and then was sidelined the next two games, has looked strong in his two games since returning.

He completed 68.8 percent of his passes while throwing for 292 yards, two touchdowns and no interceptions against Wagner.

While some may suggest that came against an outmatched FCS team, there was nothing inferior about Saturday’s opponent and Mathis completed 35 of 49 for 322 yards, three touchdowns and no interceptions against Memphis.

The transfer from Georgia is beginning to play the way Carey expected when he named him a starter before spring practice had ended.

So now that brings Temple to this week, its biggest challenge of the season when the Owls visit No. 5 Cincinnati on Friday night at 7.

This will be nationally televised on ESPN and most expect Cincinnati to roll over the Owls, especially since the Bearcats have a seemingly viable chance to earn one of the four college football playoff berths.

Cincinnati is 4-0 and has rightfully earned all the hype after Power 5 road wins at Indiana and last week against Notre Dame, 24-13.

While people may suggest this isn’t the typical powerhouse Notre Dame team, the Fighting Irish were 4-0 and had won 26 consecutive home games. Even after the loss, Notre Dame is ranked No. 14 this week.

Cincinnati can’t let its foot off the gas, because as a non-Power Five school, it not only has to win, but do so in convincing fashion to impress the College Football Playoff voters.

The Bearcats have a lot going for them beginning with quarterback Desmond Ridder, who is often mentioned among the top five quarterbacks in the country.

This is a loaded Bearcats squad and yet Temple couldn’t be facing them at a better time.

The Owls opened as a 28-point underdog and they are clearly playing with house money.

Cincinnati no doubt has to be in for a letdown after the emotional Notre Dame win and the question is can Temple take advantage of this?

Whether Temple wins or loses this game the entire outlook of the season has changed.

While Cincinnati is expected to rule in the AAC, Temple could return to earning a bowl bid and that is no small feat for a Group of Five school.

People can laugh all they want about the extensive bowl bids, but not everybody gets them as Temple saw last year. The bowls are not only good for the players and coaches, but for recruiting purposes.

Teams have to be at least .500 for consideration and right now, things look like they could be in Temple’s favor.

It’s not impossible to find three wins out of these last six games after facing Cincinnati. In a bit of a break, Temple doesn’t have to play No. 24 SMU (5-0, 1-0) this year. (There are 11 AAC teams and only eight conference games scheduled).

In the past, the Owls have given Cincinnati fits. Even in 2019, Carey’s first season, Temple lost a 15-13 decision at No. 19 Cincinnati on a miserable rainy night. Botched special teams play helped cost the Owls in that one.

Ridder completed just 9 of 25 for 62 yards, one interception and no touchdowns. A dual threat, he was held to 24 yards on nine carries.

Since then he has greatly improved and now we will see if Temple has as well. 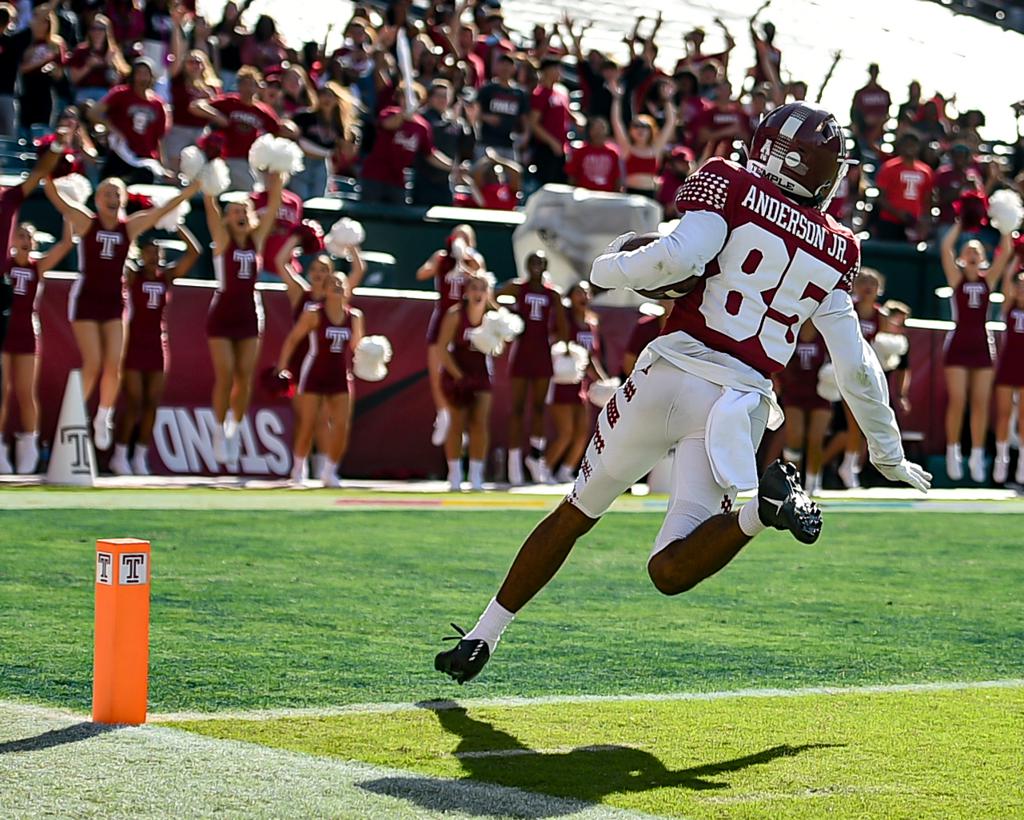 With 2:35 remaining, Amad Anderson Jr. caught a 53-yard pass from D'Wan Mathis to seal the 34-31 victory vs. Memphis - PSD Photo by Mike Nance

At the very least, things are looking up for Temple. The Owls don’t need a win this week to keep the momentum going, but a blowout loss wouldn’t be advised either.

Either way, the win over Memphis shows that Temple can compete with (most of) the top AAC schools if the Owls perform the way they did against the Tigers.

And after last season’s frustration and an uneven beginning to this year, it shows that Temple could finally be headed in the right direction.