Regardless of how long his football career lasts, Rob McConnell will happily reminisce about this past Saturday night forevermore.

In a performance for the ages, the Archbishop Ryan senior quarterback established a school record by throwing five touchdown passes to lead the Raiders to a 34-21 Catholic League Blue Division victory at Lansdale Catholic.

“It was a great game,” said McConnell, who was coming off a combined four-touchdown performance (passing and rushing) against Archbishop Carroll one week earlier. “This is definitely something I won’t forget. However, I could not have done it without my O-Line. They had a great game. I had a clean pocket all game. The receivers also had an amazing day making plays all over the field. I also have to thank my coaches for giving me the opportunity to make them plays.

“And at the end of the day we got the win. I am not satisfied with this performance. I want to continue to have games like this and help my team win some more games.”

McConnell, who finished with a career-best 301 yards passing, fired three touchdowns in the first quarter, one in the second, and the record-setter in the fourth. His variety of scoring heaves comprised three deep balls, one in the red zone from the 20, and a toss across the middle.

A school-record-tying three of McConnell’s TDs that covered 180 yards of ground were scored by senior Joe Mastrangelo, who also had a touchdown called back because of a penalty. Freshman Damien Morgan (56 yards) and junior Rich Paczewski (31 yards) added one apiece. 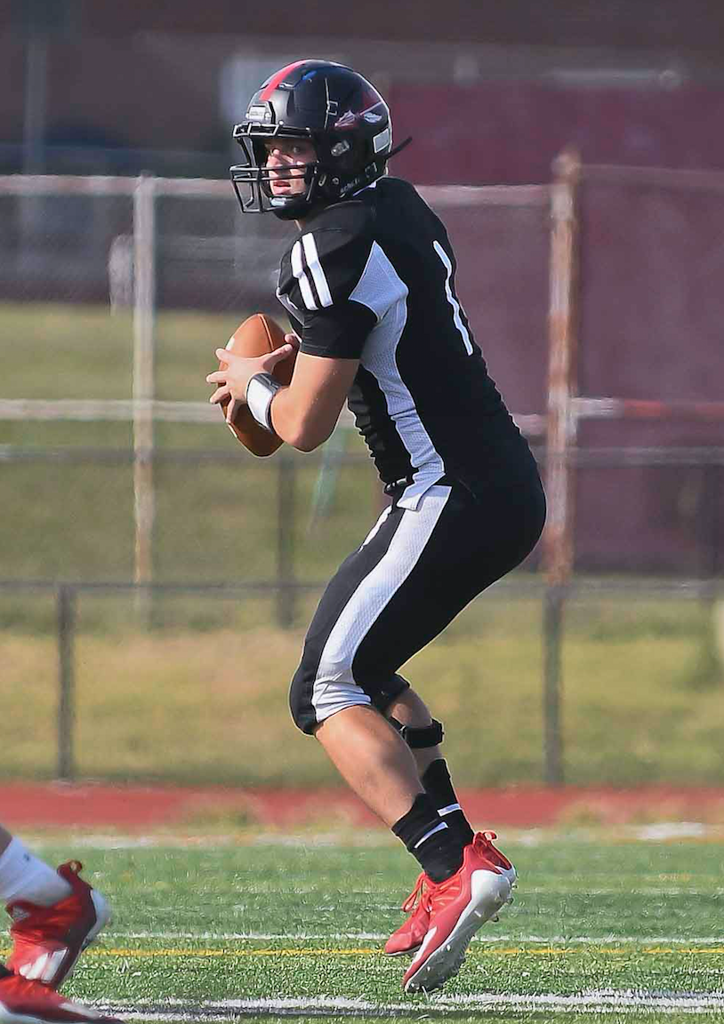 Mastrangelo was asked to describe each of his scoring receptions.

“The first touchdown was a third-and-long and we needed a first, so we went deep,” he said. “I ran a post. Before the play, Rob came up to me and was like, ‘Run the route hard. It’s gonna be open.’ He hit me on the money and I used my speed to score.

“On the second one I acted like I was blocking, then broke free and the ball floated right into my hands. Me and Rob got a different type of connection. On the third one, I was double-covered and it was a jump ball, I jumped up with the defensive back and caught it. All I had to do was make one guy miss to walk in the end zone.”

“It was great to see,” said Ryan coach Bill Murphy. “He was on all day.”

The Raiders had entered the contest with a collective chip on their team shoulder.

“The win was personal for my team since they scheduled us for their Homecoming,” said junior defensive end McDermott Murphy. “We went in there with the mindset that we were going to win the game regardless of the circumstances. Together we made plays on both sides of the ball and even broke some offensive records.

“It was a great team win for us. Now we will work to go with our own homecoming game this week.”

After starting the season with three wins, Conwell-Egan dropped the next two in convincing fashion.

In a 17-7 win at Archbishop Carroll, the angry Eagles amassed 190 yards on the ground and scored on TD runs by sophomore Sam Cooper (5 carries for 45 yards) and junior Luke Trunell. Junior Colin Majors (11 for 73) and senior Dante Morris (9 for 46) also aided the offense. Sophomore Tim Gipli snared CE’s sixth touchdown of the year, as the defense only surrendered 114 yards from scrimmage.

“The game was a needed game for us,” said senior AJ Snowden. “We’ve been 0-2 the past two weeks, but this game is where we needed to put it all behind us to get back in the winning column.

“When our offense slowed up our defense was there to pick us right back up, and vice versa. As the weeks go on, our chemistry keeps building and we’re excited for the rest of the season.”

In the days leading up to their game against rival St. Joseph’s Prep, La Salle’s players received constant well wishes from the entire community.

Before Saturday afternoon’s Red Division opener at Franklin Field even started, La Salle’s student section – part of an announced crowd of 10,000 – was more boisterous than ever.

And they stayed that way as they cheered the Explorers to a 28-21 win that put them on course to seize the school’s first football crown since 2015 if they avoid an upset against Roman Catholic, Father Judge, and Archbishop Wood.

“Guys came up to me and said ‘this is year to beat them’ . . . ‘you guys got this’ . . . and all that kind of stuff,” said senior quarterback Alan Paturzo, who threw a scoring pass to senior EJ Wentz and ran for a touchdown that turned out to be the difference. “Our fans believed in us and they supported us as we went out there and balled out in front of 10,000 fans.

The Explorers celebrate with their fans at Franklin Field after defeating St. Joe's Prep 28-21 - Video by John Knebels:

Despite the gaudy venue and monumental task, Paturzo maintained a calm demeanor throughout.

“I wasn’t really nervous,” he said. “We had a great game plan coming in and I knew what I had to do. I played with poise and made plays when I had to. I wasn’t scared of the Prep or playing in front of Franklin Field. I embraced the moment and went out there and got the job done.”

Pick Four: Not Fair to Ask Ryan To Do Any Moore

While a horde of Explorers contributed mightily to La Salle’s epic 28-21 win over St. Joseph’s Prep, senior Ryan Moore could have been named the game’s Most Valuable Player.

On offense, Moore accrued 130 scrimmage yards. Inside the final minutes, his impromptu punt pinned the Hawks down to their own one-yard line.

But the play he recalls most fondly was intercepting a long desperate pass inside the Prep 40 and then sliding to the turf five yards later with 41 seconds remaining in regulation, igniting an impassioned team celebration on the field and sideline . . . and in the stands.

“It felt really good knowing that it sealed the game and that the hard work we put in over the last couple months is paying off,” said Moore. “Knowing that we had a lot of doubters saying we couldn’t win the game pushed us to work even harder, and knowing that the interception had definitely proved them wrong was a great feeling.

“But that would have never happened if it weren’t for the defense making play after play to lead up to that final play. Everybody did their assignment, and I just happened to be in the right place at the right time.”

Pick Five: Archbishop Wood Gets Back on Track

After two uncharacteristic shutout losses, Archbishop Wood returned to familiar territory by stopping Red Division foe Roman Catholic, 30-14. The Vikings’ defense allowed only 79 yards on 29 carries against a Cahillites team that had collected 696 over the previous three games.

“It felt good to get the win to put us back into our rhythm for the rest of the season,” said senior two-way lineman Mason Yacovelli. “We came out strong and stayed strong throughout the game to come out with the win. The tension and the urgency to win is a lot higher when playing a team in your league.”

Father Judge’s 10-0 halftime lead over visiting non-league opponent Penn Charter had slipped to 10-7 in the third, and the Crusaders needed a big play.

The senior outside linebacker returned the ensuing kickoff 52 yards to the Penn Charter 32. Less than three minutes later, Judge senior quarterback Mike Van Horn scored his second rushing touchdown – his 11th and 12th of the season – to regain a double-digit lead, and the Crusaders hung on for a 16-14 triumph that improved their record to 5-1 overall with the Catholic League Red Division competition commencing next week against Archbishop Wood.

“The energy building up to the game was great,” said Marquis. “Everyone knew how big of a win this would be for us. The way we played as a team was great. Our defense, special teams, and offense all had big plays that made us come out with the victory.”