Win a game against one of the best teams in the state and people are going to talk about it for a long time.

Score four touchdowns in that game, and you’re an overnight legend.

Denmark finished with 235 total yards, 204 of them via seven receptions, one of them a 65-yard haul from sophomore quarterback John Ingram. He added three rushing touchdowns, including the game winner with less than 2:00 remaining in regulation.

After celebrating with teammates, fans, and family members, the likable running back/cornerback spoke with PSD’s Patty Morgan in an exclusive interview.

“Coming in this week, nobody had us winning this game – literally nobody,” said Denmark. “So for us to beat the number-one team in our division is big . . . super big.”

Denmark described the decisive touchdown – his 16th of the season with a minimum of three games remaining, including division contests with Father Judge and St. Joseph’s Prep. 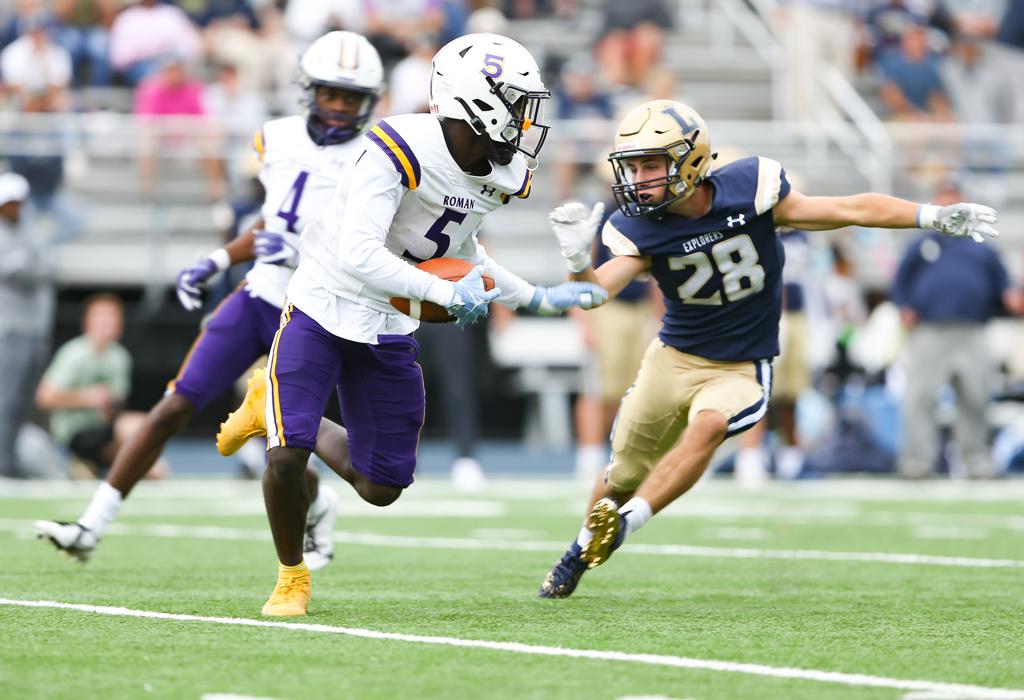 Conwell-Egan senior two-way lineman AJ Snowden woke up Saturday morning looking forward to enjoying his 18th birthday. If Conwell-Egan’s football team didn’t win its game later that day, however, any and all potential celebrations would be muted.

No worries. The candles burned brightly.

Rushing for a torrid 288 yards on 35 carries, the Eagles (5-2, 2-2) dispatched West Catholic, 36-0, for their second straight Blue Division win. Since both teams are the only PIAA Class 2A representatives, they will face each other again during the weekend of November 5-6, with the victor moving onto a district final and a chance to reach states.

“We knew the importance of this game, and we took over,” said Snowden.  “We had a great week of practice with great energy and we were excited going into the game. We knew what we were capable of and took care of business tonight and are excited to see them in the playoffs back at home.

“From start to finish we had all gas, no brakes, and were ready to go. We’re known as a running team, but we showed we can throw the ball as well. Our defense played great and got the shutout.”

The Eagles’ highlight-reel romp included junior Colin Majors accruing 156 yards and a 70-yard touchdown jaunt on 12 carries. Senior quarterback Dante Morris completed all three of his completions for touchdowns – two of them to sophomore Milton Polynice, and the other a 51-yard strike to freshman Sincere Fairey.

Junior Mekhi Harper added a touchdown return on his fourth interception of the season for the . . . dare it be said . . . icing on the cake.

There’s been much talk where Bonner-Prendergast ranks in terms of the Catholic League elite. When the Friars dropped a deflating 26-20 decision to Blue Division defending champion Neumann-Goretti last week, it would have been understandable to emerge unmotivated.

“We rebounded well from a disappointing loss,” said Bonner-Prendergast coach Jack Muldoon. “It took us a little time, but we finally put a few good series together at the end of the half. We played a solid game in all three phases.”

“Our approach for the game was to come out hot and stay hot, and we executed that as planned,” said senior two-way lineman Mason Yacovelli. “Being in first place means that we need to come out every game explosive and not let off the gas. We want people to know what Wood football is all about.”

“Our approach for the game was to come out hot and stay hot, and we executed that as planned,” said senior two-way lineman Mason Yacovelli. “Being in first place means that we need to come out every game explosive and not let off the gas. We want people to know what Wood football is all about.”

Wood senior Andrew McHugh making one of his 2 touchdowns in game vs. Father Judge. (video/Kathy Leister for PSD)

In a 14-3 win over Cardinal O’Hara, Mastrangelo corralled two interceptions, giving him four for the season as the Raiders (4-3, 3-1) captured their third straight victory. The previous week, Mastrangelo scored three touchdowns in a 34-21 victory at Lansdale Catholic.

As a team, the Raiders have thieved eight interceptions, all in the past five games.

With the game scoreless in the second quarter, Mastrangelo’s first pick was returned for a touchdown but a penalty nullified the return. Incredibly, it was Mastrangelo’s fifth touchdown called back by a penalty – two on offense, two on kick returns, and one on an interception.

However, the interception did lead to Ryan’s go-ahead touchdown. Mastrangelo added one more in the third quarter as the Lions attempted to convert a critical fourth down.

“We needed a score bad,” said Mastrangelo. “O’Hara was driving down the field. I knew that if they were going to throw deep, I was going to be right there for the interception. I picked up someone running across the field and the quarterback lobbed the ball up to another one of their players. I jumped in front of him, picked it off, and saw no one on the other side of the field so I took off.

“On the second one, I knew the ball was coming to me before I even got it. I read the quarterback’s eyes. The ball dropped right into my hands as I was defending the tight end.”

Archbishop Ryan senior Joey Mastrangelo goes for the interception and return in game vs. Cardinal O'Hara. (video/Kathy Leister for PSD)

It’s been more than a decade since St. Joseph’s Prep has lost more than one Catholic League game. Even more daunting for Hawk opponents, the last SJP losing streak occurred in the early portion of the 2014 season, when they dropped three straight but rebounded to win their final 10 and a second-straight state title.

When the Hawks took the field at Middletown High School (Delaware) on Friday, they were determined to put their previous week’s loss to LaSalle in the rearview mirror.

With sophomore quarterback Samaj Jones rushing for 116 yards and senior Blaine Bunch gaining 61 yards on 12 carries and punching home two touchdowns, the Prep regained its footing with a 24-6 victory.

“We are just focused on taking everything week by week,” said Trotter. “We are not looking ahead. We will play the teams that come next.”

That will start with a huge PCL contest 1:00 Saturday at Archbishop Wood. A loss by the Hawks (3-2 overall, 0-1 league) to the first-place Vikings (5-2, 2-0) would eliminate the Prep from any chance of extending their Catholic League championship streak that started in 2016. PIAA Class 6A districts and state playoffs, however, are a separate entity and would be determined by the Class 6A PCL playoffs.