VILLANOVA, PA-- Toppling a giant is never an easy task. For the past few seasons, Inter-Ac volleyball ran through Academy of Notre Dame. Had it not been for a Covid shortened season a year ago, the Irish would’ve won the Inter-Ac title every year since 2016. But for every Goliath there is a David and for Notre Dame that was the Agnes Irwin School, who defeated the Irish 3-2 to secure the outright Inter-Ac title on Oct. 19th. This is the Owls first Inter-Ac volleyball championship in over a decade. 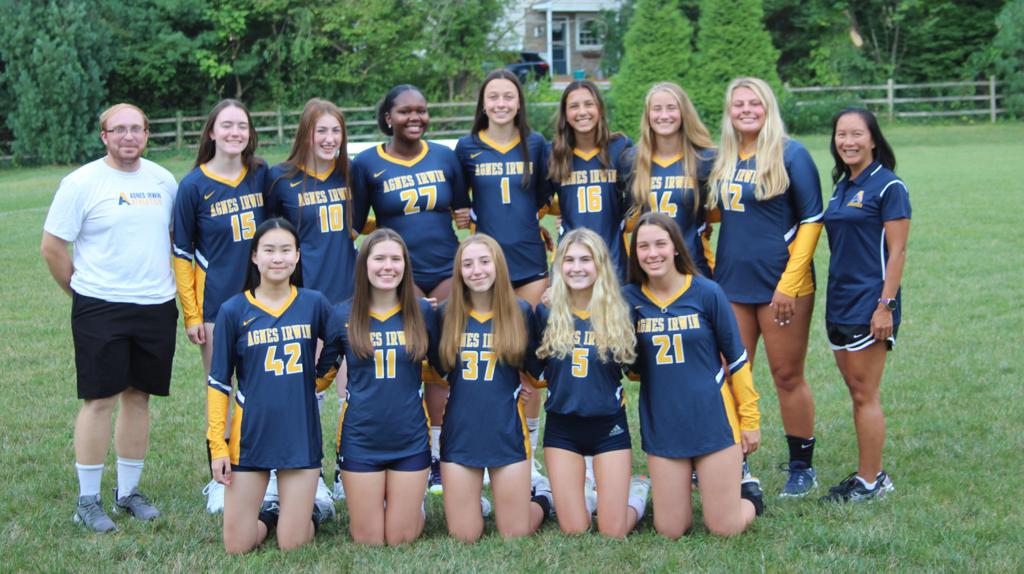 “We were so excited because the last time we played Notre Dame was the first time we beat them in five years,” said Agnes Irwin senior co-captain Golda Mehl. “This time, it pretty much secured our win for the Inter-Ac, which is something we have never had in my high school career. So it's so exciting for me and for the whole team.”

Despite the lack of hardware to show for it, Agnes Irwin has featured some talented teams over the last few seasons. Unfortunately for those previous Owls teams, Notre Dame has always stood in the way. But after having played for coach Lawrence longer than any other team before them, this year’s Agnes Irwin team featured a kind of maturity that can only come in time.

“We've been chasing [Notre Dame] for a really long time and we've had a few teams in the last five years I've been here that were really close,” said Lawrence. “I've had these kids probably the longest from when they were freshmen to now. They listen really well and they absolutely are probably the most mature team I've had at this point of the season, for sure.”

Prior to their meeting this past Tuesday afternoon, Agnes Irwin and Notre Dame faced-off against each other earlier in the season. The Owls were able to come away from the contest with the victory and an added sense of confidence. It was the first time anyone playing for Agnes Irwin had ever beaten Notre Dame and it had them thinking this could be their year.

“The first Notre Dame game, that was a really good moment from this season. That was the first time we've beaten them in the past five years or so,” said Agnes Irwin senior co-captain Jenna Zwilling. “That got everyone in the mentality that we could do this. I think that fueled us to know that we could achieve this goal that we all had in our minds.” 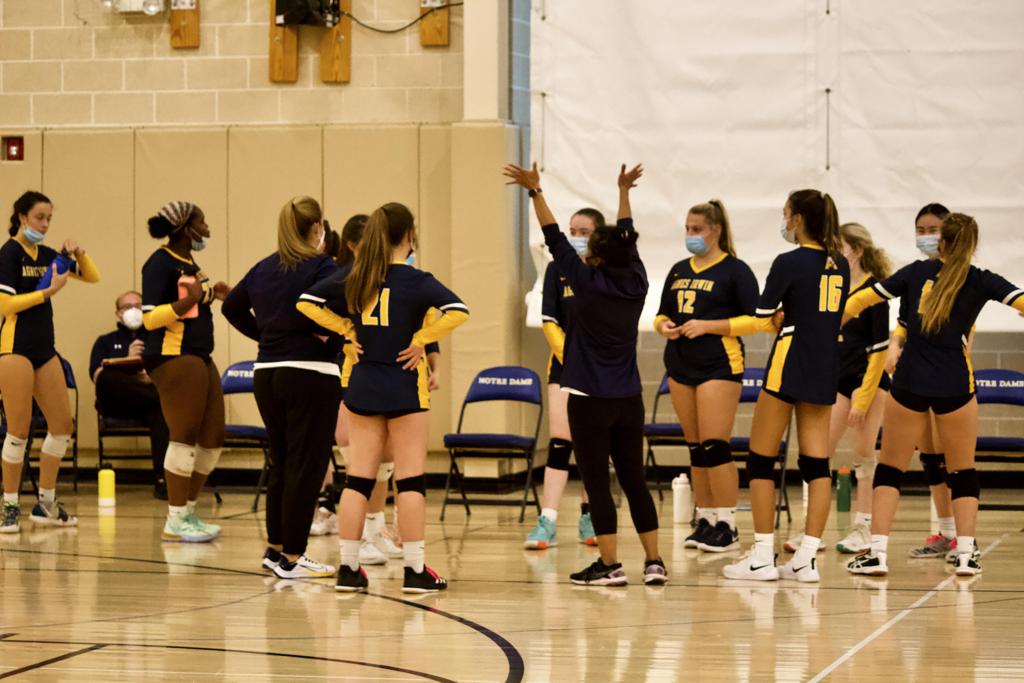 With one win over the Irish already under their belt this season and going into this game with a 7-0 league record, Agnes Irwin was ready for their showdown at Notre Dame Academy.  While the Owls had the experience of a previous victory, they got off to a slow start and dropped the opening set to the Irish 25-16. Despite the early deficit, Agnes Irwin remained undeterred and focused on their goal.

“We didn't shut down after the first set. We kind of said, ‘You know what? It's fine.’ We didn't have our energy and then our bench and our JV and all of our parents started coming in and they really started throwing that energy in there,” said Zwilling. “And once we started that second set with all of that, we were really able to turn it around and win the game.”

After the opening set, the crowd began to play a much larger role in the game. The bleachers quickly filled up and the energy inside Notre Dame’s Aimee Willard Gym became explosive. The volume in the building got cranked up to thirteen and Agnes Irwin began to feed off the crowd’s energy.

“This gym was crazy. I've never played in a gym like this. It was so crucial. Not only is there a battle on the court, then there's a battle of the fans, one side cheering, who can cheer louder,” said Zwilling. “And it really benefits people to come out. It benefits us so much because we get so hyped off of them. And all the girls and all the teachers and faculty and our parents that came out, we really appreciate how much they truly helped us win this game.”

With the crowd rocking, Agnes Irwin was able to even up the match at one set a piece, taking the second set 25-15. While the raucous crowd helped energize the Owls, it had a similar effect on Notre Dame. The Irish weren’t going to go down without a fight and the crowd helped keep them in the game.

Agnes Irwin and Notre Dame would then each exchange sets, with the Irish capturing the third set, 25-19, followed by the Owls taking the fourth, 25-8. Everything was leading up to a climactic fifth and final set to decide the match. Agnes Irwin have found themselves in a similar situation in past seasons and ended up faltering due to late-game exhaustion. However, things would be different this time around after introducing a strength and conditioning program heading into the season.

“The difference has actually been instituting strength and conditioning. We've always been trying to do it in the past, but matches like this where it goes five.  We had a really good chance of winning it then, but we got tired and we just ran out of steam in that fifth set. Every time we went to five sets that year and we just couldn't get over,” said Lawrence. “And now that we have a new strength and conditioning coach, we've really made an effort to institute it. The girls were a little hesitant about it, but we made them do it and it absolutely is making a difference, for sure. I mean, you could see it tonight. They got tired and we really didn't.”

Agnes Irwin got out to a dominant start in the fifth set, taking the 10-4 lead. Notre Dame would battle back midway through the set to take a 13-11 lead and come within two points of sealing the match. With their backs against the wall, the Owls would score four straight points to steal the victory away from the Irish and win the outright Inter-Ac title.

“We've been doing this for a long time and I know our team last year knew this would be our year to do it,” said Zwilling. “We all came in with the mentality coming into this year and we really focused and we pushed hard and we really tried, and it feels really, really good.”

A decade-long championship drought can make a title win all the more worthwhile, but after enduring a season filled with so much uncertainty a year ago due to Covid restrictions, this victory was everything the girls of Agnes Irwin could’ve hoped for.

“This is so great, we only had three games last year, so it feels nice to end my senior year with a full season,” said Mehl.

“It's honestly kind of surreal because I wasn't sure what this year was going to look like with Covid. We weren't sure we'd be wearing masks. We weren't sure how anything was going to go,” said Zwilling. “So it's really nice to go from Last year, we only got four games and we felt like we kind of got our season taken away to now coming and winning. It really does feel nice. It's reassuring that the work we did and we were able to get in last year did pay off as we took it really seriously.”

Agnes Irwin senior captain, Golda Mehl, was recognized as the Philadelphia Sports Digest Player of the Game for her contributions in the Owl’s championship securing win. She finished the match with 12 kills, 5 blocks and 7 aces. Mehl has been a constant source of support and encouragement for all of her teammates throughout the season and she delivered one of the best performances of her career when her team needed her most.

“Golda is a great team captain. She's got a pulse on everybody. She is really in touch with how people are feeling. She's cognizant of it. She speaks up for the team. She has them at the forefront of her mind. She's always playing for them,” said Lawrence. “Tonight she was the most composed. She played her game solid. She didn't get anything down. She didn't overplay. She just played very consistently. And that's what you need from a captain. You need in these pressure moments, someone to keep calm and make sure the balance stays and no one gets too hyped up. And she did great. She brought her best game today.”

Agnes Irwin senior Golda Mehl who led her squad with 12 kills, 5 blocks and 7 aces was recognized as Philadelphia Sports Digest's Player of the Game. (photo/James Williamson) 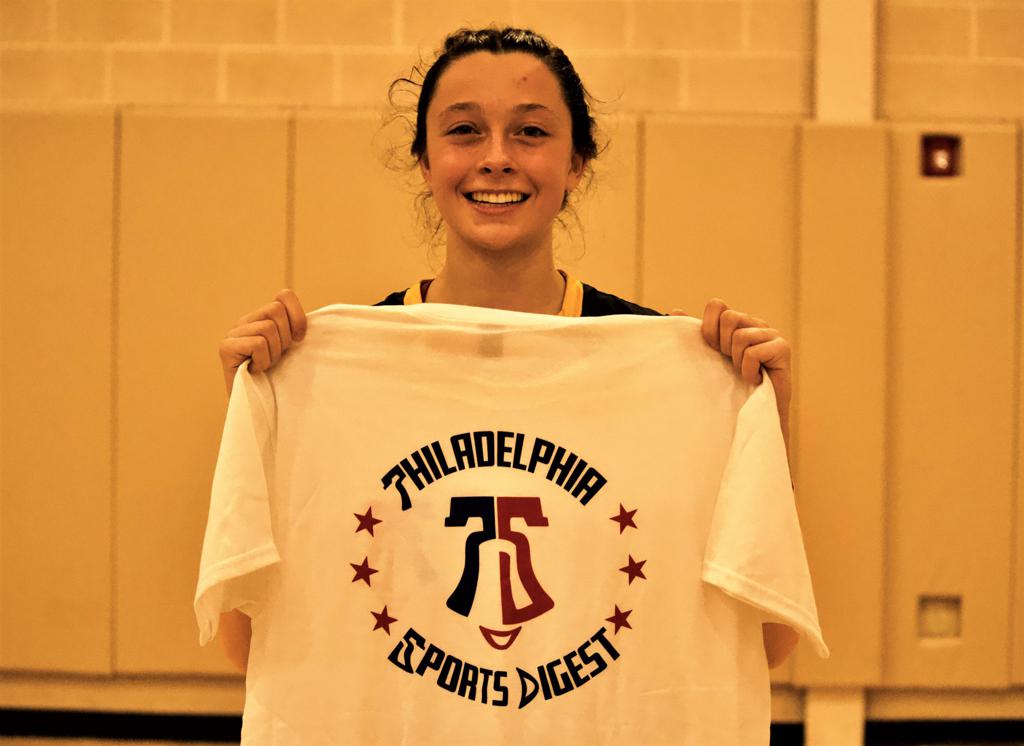 For as nice as a championship victory is, especially one ten plus years in the making, it’s only a matter of time until a team begins to look towards what’s next. The state playoffs await both Agnes Irwin and Notre Dame, but as far as the Inter-Ac goes, the focus of the Owls future now shifts to the underclassmen. Agnes Irwin’s senior class was pivotal in ending their title drought, but the underclassman will have to carry the torch into next season. It’ll take a bit of on the job learning, but this year’s senior class believes the team is in good hands moving forward.

“They're the team leaders now. When I was a freshman, we didn't think that our team was going to look this way four years from then,” said Mehl. “So just because you might not think that it's going to go out as planned, it could be better, you can still win.”

“They're all awesome. They're not only some of the best volleyball players I know, they're also the best people I know,” said Zwilling. “If they can keep the mentality that we have this year and just spring it into next year and take the focus and all of that and focus on the little things, I think they could be very strong next year.”