Special thanks to Marc Narducci and contributors John Knebels and photographer/videographer Donna Eckert for the incredible job they have done capturing the entire season.

An amazing display of athleticism by both teams marked an incredible end to the Philadelphia Catholic League girls soccer season. After such an unprecedented year marked by Covid the season prior, every single team gave it their all and took nothing for granted to once again be on the playing field.  Congratulations to all PCL soccer teams!

PHILADELPHIA -- A lesson learned from the semifinal paid dividends for Archbishop Wood in the Philadelphia Catholic League girls’ soccer championship.

In the semifinal, the Vikings took a 2-0 lead against Lansdale Catholic at halftime but took their foot off the gas in the second half and were taken into overtime before winning 3-2.

So, when the Vikings were tied at 1-1 at the half of the championship game against Archbishop Ryan, head coach Tom DeGeorge had a simple message for his team.

“We learned a lot the other night, we were up 2-0 against Lansdale Catholic, came out the second half, things didn’t go our way and we talked about it at halftime and thought we played really well in the first half (against Archbishop Ryan) and no letdown.”

No, this time there was not any signs of letdown for sure. The Vikings had a dominant final 40 minutes enroute to a 3-1 win over Archbishop Ryan in the Catholic League championship before a huge crowd at Philadelphia’s James Ramp Playground.

For Archbishop Wood, it was its first Catholic League title since 2016.

In this championship game, the Vikings actually showed their composure well before the second half began.

Archbishop Ryan jumped out to a 1-0 lead in the sixth minute when Gianna Rivera continued her torrid postseason by scoring with a goal on a breakaway. In Ryan’s 5-1 semifinal win over St. Hubert’s, Rivera contributed a hat trick.

Following River's goal in the title game, not only the score, but the momentum was in Ryan’s favor, but Archbishop Wood senior Meghan Matthews tied the score in the 15th minute on a goal that came off a scramble from in front of the goal.

And play they did.

One thing that helped was a tactical move that DeGeorge made in the first half, in moving his daughter, sophomore standout Ava DeGeorge, more up in the attack.

A center midfielder, Ava DeGeorge has impeccable ball control and is able to beat defenders one-on-one. More importantly she has the composure to hold the ball, waiting for teammates to get open.

With Ava DeGeorge leading the way, the offense pushed forward, putting more pressure on the Ryan defense. And the second half also showed that Ava DeGeorge is money when it comes to taking corner kicks.

In the 51st minute Wood broke the tie when Ava DeGeorge found a familiar target on a corner kick, senior Alyssa DeGeorge, her sister.

Alyssa DeGeorge headed the ball in.

“What’s funny is that I coached her since she was eight and that was her first head ball (for a goal),” Tom DeGeorge said. “That’s the first time she ever headed the ball in the back of the net, so think about perfect timing.”

When taking corner kicks, Ava DeGeorge has a simple strategy.

“On the corner kicks I just try to aim it at the goalie because I know that is really a dangerous spot and hopefully somebody would get their head on it,” Ava DeGeorge said.

This goal and this victory were extra special for the younger DeGeorge.

“It feels amazing, especially since my sister is a senior and this would be the last time, I am playing with her (in the Catholic League playoffs) so just to do it for her is a great feeling and I am really happy to bring the championship back to Wood.”

Sisters Ava (l) and Alyssa DeGeorge talk about how special it was to win a championship together. (video/John Knebels for PSD) 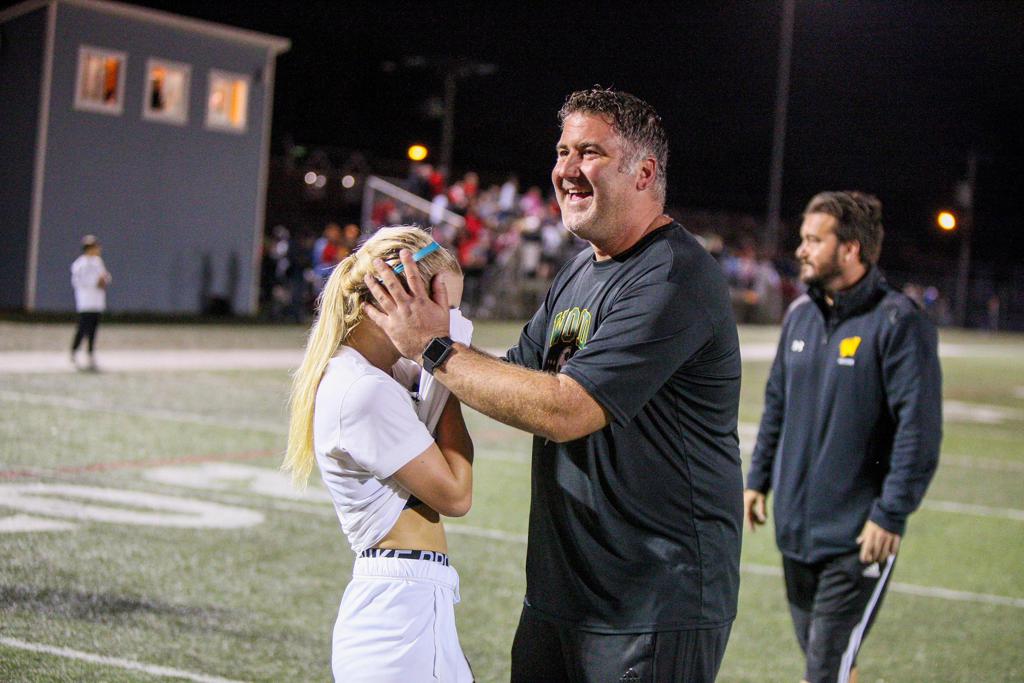 The game was still in doubt when Matthews provided her second goal of the game, which again came on a scramble in front of another Ava DeGeorge corner kick.

Two goals in the championship game? The feat earned Matthews Philadelphia Sports Digest’s Player of the Game award. That is a game that provided a life-long memory for the Vikings’ senior.

“It is honestly crazy, it’s about being in the right place at the right time and never giving up,” she said.

Another player who stood out for the champions was Emily Beck, a midfielder who was so instrumental as a two-way player, making several key defensive plays, while having the ability to help get the offense started.

Archbishop Wood and Archbishop Ryan had played to a 1-1 draw in their one regular season meeting. That game, like this one, had a championship atmosphere.

“It’s definitely not the outcome we wanted, I think we had some good moments, but we weren’t able to capitalize on them,” Archbishop Ryan coach Scarlett Walsh said. “I don’t think it’s the best soccer we played, and I wish we could have come out and played a little better today.”

Wood senior goalie Bella Diodato talks about the intensity of her position especially against a tough opponent. (video/John Knebels for PSD)

Both teams will now focus on attempting to win a PIAA state championship, with Archbishop Wood in 2A and Archbishop Ryan in 3A.

What was also good for the league was its two best teams showcasing soccer at its best.