Well Worth the Wait: More Than Ten Years in the Making The Lions Raise the Plaque

SPRINGFIELD, PA--A decade is a long time. A decade of waiting can feel even longer. For the Cardinal O’Hara volleyball team, the last decade has been spent trying to recapture glory.

From 1999 to 2009, Cardinal O’Hara reigned supreme in the world of Philadelphia Catholic League volleyball. The Lions won ten straight PCL titles and established themselves as the clear class of the conference. Since then, however, O’Hara has experienced a championship drought. The Lions have walked away empty handed ever since 2009 despite maintaining a talented program and regular appearances in the PCL championship game. The drought finally came to an end Saturday, October 30th as O’Hara defeated Archbishop Wood in straight sets (25-9, 25-15, 25-11) to capture their first championship title in over a decade.

“It feels great, it's been a long time coming. This team has worked really, really hard from day one,” said Cardinal O’Hara head coach, Bill Collins. “We played a really tough non-league schedule exactly for this reason that when we got here, there wouldn't be anything that we haven't seen before.”

“I'm so excited. We were so prepared, like we were getting your conditioning everything, and it just led to this moment,” said Cardinal O’Hara senior and All-Catholic MVP Bridget McGuinn. “And I'm just so happy because we haven't had it in such a long time, so it just makes it even better.”

Over four thousand days of waiting led to this moment. Most members of O’Hara’s volleyball team weren't even ten-years old at the time of their last PCL title victory. The 12-year drought was a heavy weight for this Lion’s team to inherit considering the players are so far removed from the program’s last PCL championship victory, but the added pressure just made the girls want to win even more.

“We are so excited. There was definitely a lot of pressure on us to get here because we just haven’t had it in so long,” said McGuinn. “We did know that we had enough talent to get here, and we definitely took advantage of the opportunity and the talent we have on the team. We worked really hard to get here, so I'm super excited.” 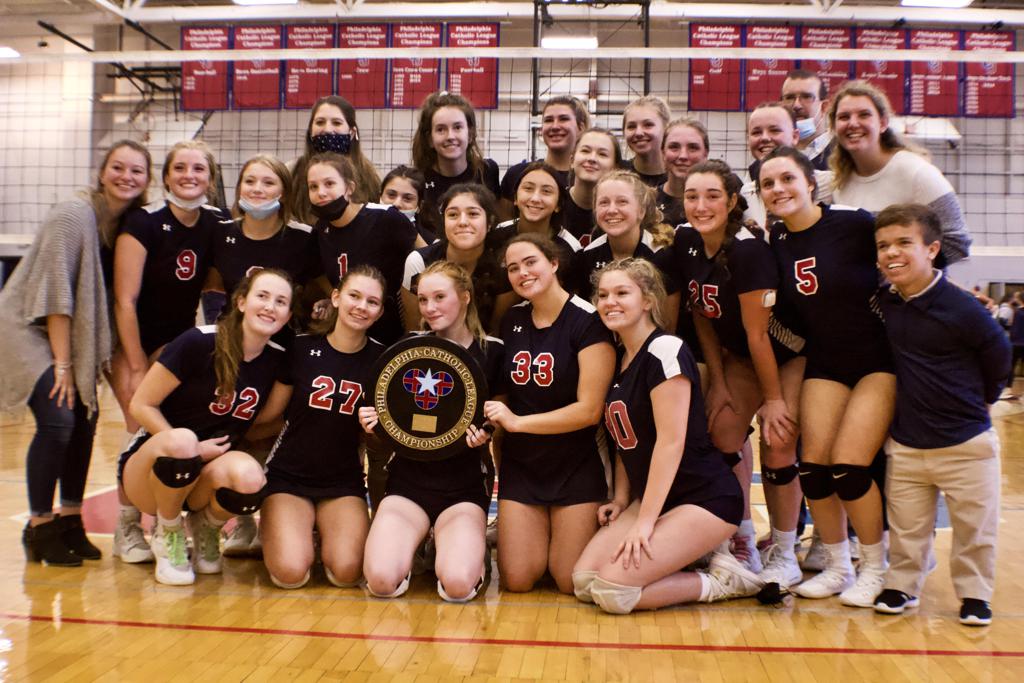 From the very start of their championship bout, it was clear Cardinal O’Hara was a team on a mission. However, it wasn’t a given that the Lions would walk out of their home gym victorious. O’Hara had been dominant all season, but the one team that was able to take a set from them during the regular season was Archbishop Wood. It is only fitting that the last obstacle standing between O’Hara and the end of a 12-year championship drought was their most difficult opponent from the regular season.

“I thought if we played the way we can play, we can win. So, I went back, and I looked at the stats and I went, ‘Hey, we have a lot of unforced errors when we lost the first set to them,’” said Collins. “They've lost one set the entire Catholic League season, and it was to (Archbishop) Wood. I'm always fearful that something bad is going to happen. But they wouldn't let it happen. They were on a mission from the first point today.”

“Archbishop Wood is probably the most competitive team in the Catholic League. They definitely have a lot of talent on their team,” said McGuinn. “But in the end, I think it was just the motivation and our talent and everything that just came together that helped us.

This title victory serves as a testament not only to this year’s Cardinal O’Hara team, but the teams that came before them that finished just short of championship glory. In addition to the drought-breaking PCL title,  coach Collins, also earned his 300th career victory this season. Both accomplishments coming in the same season just go to show how long Collins has been working towards these goals and how hard his team has fought to achieve these milestones.

“There's 13 years of teams before them that won a lot of matches that helped get to 300 wins. This team winning the PCL is one of two in my 14 years. So, I mean, we've been to the finals, I think this is my 10th time or 9th time in the finals and we've not necessarily gotten the end result we wanted,” said Collins.

"This is kind of special because a lot of these girls I've known for a long, long time, like Maggie Doogan, I've known since she was like four. So, for her to be on that team, there's a lot of girls from our grade school parish that I coached in grade school and when my wife coached them. So, this is for all the coaches, these guys had grown up with, all the club coaches that helped them get there. I mean, I had them for three months a year, and a lot of these kids play 12 months a year. So, my other coaches had a lot to do with this.”

While the achievements of this year’s Cardinal O’Hara team testify the hard work this program has gone through over the past 12 years, they also go to show how much Collin’s players care for him. For as much as he may have wanted these accomplishments, his team wanted to be the ones who helped him achieve them.

“It's such a good feeling,” said Cardinal O’Hara first-team All-Catholic senior Maggie Doogan (Richmond basketball commit). “I've known him for like forever, so just helping him accomplish those amazing things is just like an honor to be a part of it. He wanted this so much.”

“It feels amazing that we were able to help him like that, and he's also a great coach and we really like to think that it's been long deserved because it's been a while,” said McGuinn. “And yeah, we're just super excited to be able to do that for him.”

As much as this title is for Collins and all the teams of the past who did not get to hoist the PCL Championship plaque, this title is also for the seniors who graduated a year ago. Last year’s Lions team was just as good as this year’s, but due to COVID restrictions, the team never got the chance to play for a PCL title. With a good portion of last year’s team returning to win this title, they now know for sure that last year’s team was a part of this victory.

“Last year, we had maybe like five or six games, not many. Then we got shut down at the end of the season so that was kind of hard on us,” said Doogan. “But coming back, we knew this is our senior year, like half our team are seniors so, we knew this was the last chance to bring it home. So glad we got that done.”

“They were on a mission, especially the seniors. They got a COVID shortened season last year,” said Collins “We thought we were really good. Now we know, they know that they were. They're the best team in the Catholic League this year. They earned it.”

O'Hara senior Maggie Doogan talks about being a part of the team that brought the Championship Back. (video/James Williamson)

Cardinal O’Hara can now sit comfortably knowing that their 12-year title drought is officially over. The Lions can begin preparing for the state playoffs, but next season will be here before they know it. While O’Hara will be losing a substantial portion of its team due to graduation, the team should still be in good hands. Doogan has some simple words of advice for the underclassman who will have to step up next season.

“Just go out and have fun,” said Doogan. “I mean, every game is something different, so just enjoy every moment.”