BOYS SOCCER: Red Hot Germantown Academy Pulls Ahead with One Game to Go, In Prime Position to Win Inter-Ac Title

After two tough losses to kick off league play, the Patriots have won 7 straight to move a half game over Springside Chestnut Hill Academy – See Around the League PAISAA Updates

PHILADELPHIA – Coming into last Tuesday afternoon, Springside Chestnut Hill Academy was 6-1-1 in league play entering their match on the road against Episcopal Academy. SCH lost a heart breaker 2-1, in double overtime pushing their season record to 6-2-1 on the season. On the other hand, Germantown Academy took care of business and beat Haverford School 2-0 at home to move into first place in the Inter-Ac at 7-2 overall.

This marks the first time all season that a team outside of SCH held the top spot in league standings. Germantown Academy is an extremely talented and confident club that did not let their slow start in league play derail their entire season.

“They had been told, and many of them knew, that Inter-Ac games were a different animal. The bigger challenge was they had lost two in a row and they put themselves in this position. They had/have nothing to lose. They had/have to play each game as if it was/is a final. They couldn't afford to lose a game. The interesting thing is the play didn't change much. Minor things were worked on, simplifying passes, controlling the ball, controlling space, nothing monumental was done,” said GA head coach Kurt Wetzel.

“We just worked a bit harder, and like all teams, had some good bounces fall our way. Are we proud as coaches? Beyond words. Yes. Have we done anything... nope. We still must win on Saturday, and I assure you PC will be ready and do all they can to deny us,” added Wetzel.

Wetzel hit the nail on the head. The Inter-Ac is a different animal. It does not matter which team is lined up across from one another, it is going to be a fight for 80 minutes. That is why it is as impressive as it is that GA has been on a run of this caliber. They have been tested over the seven-game stretch but have not broken.

This was no exception with their battle against Haverford on Tuesday. Even though they came away with a 2-0 victory, in the Inter-Ac, records can be deceiving. Any team can come away with a victory on any given day. On this day, Haverford did not make it easy on the Patriots, but it wasn’t enough to keep GA out of the win column.

“The takeaways are simple: We won. They really made us work and demonstrated that we need to refocus on doing the simple things. The number of chances we left wanting, and the chances Haverford created could have made that game much more interesting had any of them found frame. Again, to the previous point, all Inter-Ac games are brutal. This victory was no exception. We really had to work for it,” said Wetzel.

This game was a battle from start to finish. SCH broke the scoring open in the first half on a gorgeous over the head through ball by midfielder Caleb Zucker. Colin Woehlcke took care of the rest and buried one past the keeper, to make the score 1-0. This would be it for SCH on the day, as they were unable to find the back of the net on another occasion.

Before the first half would conclude, there was a cross played into the box. Mayhem ensued, the ball was deflected outside of the box, and EA senior midfielder Milo Michalczewski was in the perfect place and finessed a perfect chip shot over the SCH keeper, bringing the score even before heading to the half.

The second half would yield zero goals, forcing the two teams into an overtime which would have major implications on the league tables depending on the outcome. SCH needed this win to keep a hold atop of the league tables, but EA sophomore Sam Graham had different ideas, as he was able to sneak one past the keeper off of a cross played into the box. This would lift the Churchmen over the Blue Devils 2-1 in overtime’s final minutes.

“I just saw Brad play it to Flynn, and he played a really great ball, and I was able to just get a foot on it and drove it in,” said Graham.

Even though this was not the result SCH wanted, these games are important for teams to play in, especially entering the PAISAA tournament which is a single elimination. Mistakes are magnified, and one may only get a single opportunity to capitalize on to aid their team to victory. 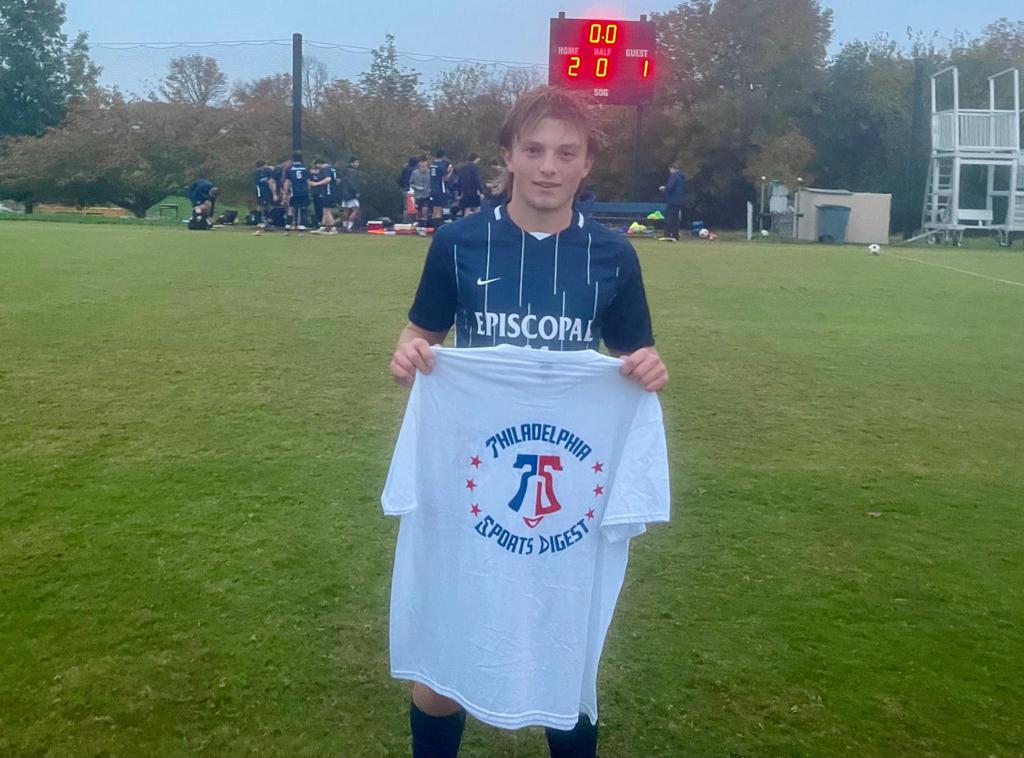 “The tension certainly mirrored that of a tournament game where you lose and go home. With the PAISAA tournament being single elimination, a team can't afford to not capitalize on chances or give away cheap goals. And if they do, then they need to be resilient and positive in order to bounce back. We didn't do that against EA and it was crucial in us not getting the result we wanted. That being said, each failure can be a lesson, so hopefully we learn from this game quickly,” said SCH head coach Brian Zalasky.

This Saturday will not only be about a championship, but it will also be about tradition…about 135 years’ worth. The match-up between Penn Charter vs. Germantown Academy will be a bit different this time around, as GA has the opportunity to capture the Inter-Ac title for the first time in 12 years. The cherry on top, for the Patriots, will completing that mission against their historic rival on the road.

“PC soccer is 2-6-1 in league. Don't think for one second my boys are taking this game lightly. They know what is coming. They know how crazy the day is. They know anything can happen. It has. Even in the last four years. The PC boys will be acutely aware of the lifetime bragging rights that come with knocking off GA, who has an opportunity to win the league for the first time in 12 years as no one likes to lose on their home field. Ever,” said coach Wetzel.

Wetzel wants this victory bad for his club. He has seen the transition and work put in by his team over the last three years. He will leave no stone unturned as he gets the Patriots prepared for the biggest game of the season.

“I will spend too much time away from my teaching duties to make sure I have all the bases covered to be ready for everything that (PC) Coach DiBenedetto can dream up. I am sure I will miss something, and our boys will need to use their skills and experience from the last few seasons to persevere and find a way to put the ball in the back of the net. And that that is what the day is all about. Finding a way to win,” added Wetzel.

Buckle up folks, this is going to be something special.

In the first round of the 2021 PAISAA state tournament, No. 11 Penn Charter traveled to take on No. 6 Episcopal Academy. The Churchmen would continue their strong week and edge out the Quakers 2-0. With this win against PC, EA advanced to play GA in the second round.

“We were disappointed with our finish in the Inter-Ac, so we wanted to have a strong showing in PIASAA. We wanted to finish on our final third. We have had a lot of opportunities in the last couple of games. I thought today we did a really good job putting the ball in the back of the net,” said senior midfielder Sam Malloy.

This was a strong initial showing for the Churchmen. The PAISAA tournament is a clean slate for all competing independent schools across the state - it is anyone’s ball game.

“It has been a breath of fresh air to be honest, last year there were so many regulations, new rules, and things were changing weekly and daily. Just the freedom the boys have this year to play and to be out with each other, they really have bonded a lot more over this experience this year and have not taken it for granted,” said EA head coach David Knox.

EA vs. PC PAISAA 1st round highlights by Cole Nowak:

This quote is truly what it is all about, win or lose. It is great to see soccer being played again at great capacity.

Other first round scores:

EA's Alex Barrist & Sam Malloy comment on the takeaways from their PAISAA 1st round victory vs. PC:

EA head coach David Knox said this season has been a "breath of fresh air." - videos by COle Nowak

The highlight game of the PAISAA second round was between Germantown Academy and Episcopal Academy.