COLLEGE FOOTBALL: Temple Football Program Once Again at the Crossroads

PHILADELPHIA – On Saturday, what has been inevitable for some time became official when Temple University’s football team suffered a 37-7 home loss to nationally ranked Houston.

This is a good time to check the temperature of the Temple program, one that recently hasn’t been registering much of a pulse.

It wasn’t that long ago that under coach Matt Rhule, Temple advanced to the American Athletic Conference championship game in 2015 and won it the next year.

Rhule departed for the greener pastures of Baylor after that championship season, before earning even more green with the Carolina Panthers.

Earning a bowl bid was no longer a surprise but an expectation.

Of course the consecutive bowl bid streak ended last year. That is when the downhill spiral started and has continued to gain momentum the wrong way.

Temple went 1-6 in last year’s COVID-shortened season. The Owls were hit hard by the pandemic and injuries but the prognosticators weren’t seeing this as a one-year aberration.

During this year’s preseason AAC media poll, Temple was picked to finish 10th – in an 11-team conference.

Looks like the media had their predictor hats adjusted pretty well when discussing Temple. The Owls are currently 1-5 in the AAC, tied for ninth place.

As it turned out, this was a one-sided exchange, in favor of the players who left.

So, much of the talk will be about coach Rod Carey’s job security. The Owls went 8-5 his first year and earned that fifth straight bowl appearance in 2019. Since then, they are 4-13 and not surprisingly it hasn’t been a good 4-13, with lopsided losses the norm.

There has been plenty of speculation about Carey’s job status. The Inquirer reported that he would have a $6 million buyout and there is a real question whether a school like Temple should spend that kind of dough to have a coach go away.

If this were a high profile SEC school, that $6 million would be tip money, but not at Temple.

Either way, the administration should make a decision as soon as the final game with Navy is completed on Nov. 27.

The day after that game, or maybe at the most two days after, Temple should either make a statement that Carey is staying or going, but don’t let things hang in the wind.

No matter what is decided, Temple has to realize that the football program is losing more than games. Temple is also coming up short on the relevance battle as well.

Even in the best of times, such as 2015 when Temple sold out Lincoln Financial Field for a win over Penn State and a near-win over Notre Dame, the Owls were never the No. 1 topic on sports talk radio.

Sure, there was some chatter, especially after the Note Dame game on ABC, but it was limited and it died down quickly.

Even when the Owls won the AAC title the next season in 2016, the accomplishment, while important to the Temple diehards, didn’t register with the sports talk masses in Philadelphia.

So, imagine when the program struggles.

The worst thing for Temple is for its dedicated fans to give a collective shrug. Apathy is the biggest enemy of a college team in a pro sports town.

What Temple has to fear is that even those who care about the program, might turn their backs.

And right now that appears to be the case.

The Owls have lost five in a row, have been outscored 217-35 in that span.

Their top receiver Jadan Blue, didn’t even wait until the season ended to hit the transfer portal. 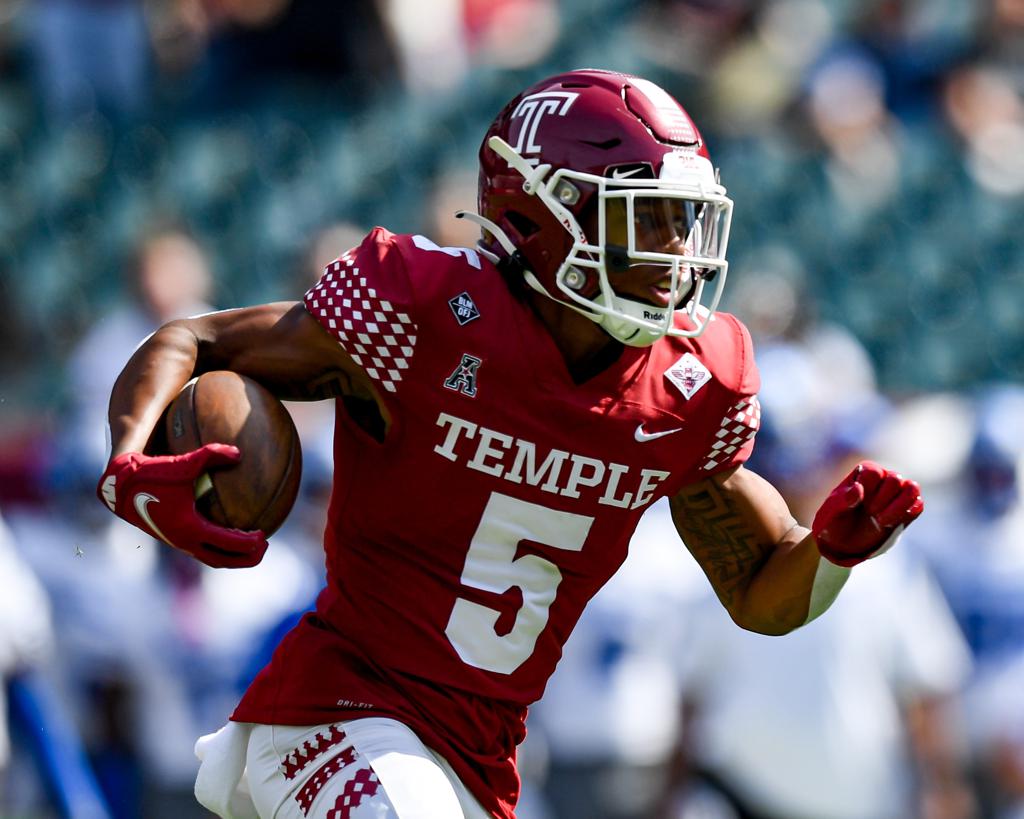 Temple standout WR Jadan Blue announced on Twitter on Nov. 10 that he is entering the transfer portal - PSD Photo by Mike Nance

Carey was asked at his Monday press conference if in nearly 10 years as a head coach, which includes six years at Northern Illinois, if he ever felt he had to coach for his job.

“No, that doesn’t affect how we go about our deal,” he said. “We know the profession we are in, you know, we all chose it, so that doesn’t enter in anything that we do daily or thinking-wise.”

If any optimists are looking for a bright spot, Temple has played a lot of young players. Both quarterbacks, starter D’Wan Mathis, who has missed time with injury and Justin Lynch, are freshmen. Mathis, who began his career at Georgia, is a third-year redshirt freshman and Lynch a true freshman. (Remember, last year's players got a free year of eligibility from the NCAA, enabling Mathis to still have four years at Temple if he desires).

The second and third leading tacklers, safeties M.J. Griffin and Alex Odom are both freshmen.

So players are getting experience, but they are also becoming accustomed to losing.

Right now Temple is in a quandary. This is not a Power Five school, but it is one that wants to win more than it loses. Just like any team on any level.

The administration has to decide if these young players can keep developing and pull the Owls out of this miserable losing cycle.

It has to decide whether this coaching staff is capable of a turnaround, or if a program that has made three coaching hires since 2017, including the 18-day stint of Manny Diaz, must start yet another search for the new face of Temple football.

Looking Ahead: Temple will play on the road vs. Tulsa this Saturday (4 p.m.) before finishing their season at home vs. Navy on Nov. 27 (Noon).