COLLEGE: Villanova Football Looking for More Good Minutes of Offense in Pursuit of a National Championship

Villanova gets the No. 5 overall seed in 2021 FCS Playoffs, awarded first round-bye.

That apparently is all Villanova needed to earn its first Colonial Athletic Association championship since 2012.

The Wildcats ended their regular season with Saturday’s 21-13 win at rival Delaware and the axiom that one could throw out the record books when these two rivals meet once again proved true.

Delaware was nationally ranked earlier this season, but never rebounded from losing quarterback Nolan Henderson for the season due to injury after only four games, finished 5-6.

Villanova is now 9-2 and has another season to play – the postseason, one in which the Wildcats know the terrain. The Wildcats are returning to the FCS playoffs after last competing in the postseason in 2019.

Winning the CAA earned the Wildcats an automatic FCS tournament bid and a first round bye.

In the win over Delaware, Villanova looked a little emotionally gassed.

That is what competing in the treacherous CAA will do to a team.

The week off will definitely help Villanova.

The Wildcats technically were tied for first with James Madison, both 7-1, but since Villanova won at JMU, 28-27, that head-to-head victory was the tiebreaker difference.

Before looking at the postseason, let’s get back to the eight minutes.

“They are a really good team and had more ways to win this game,” Delaware coach Danny Rocco said about Villanova.

Then he gave his time estimate for the Wildcats’ offensive dominance.

“They played really good (offensive) football for about eight minutes, in that eight-minute time span they won the game,” Rocco said. “Other than that, defensively we were pretty much lights out.”

Early in the fourth quarter, Villanova was trailing 13-7, when the Wildcats scored two touchdowns in less than three minutes, needing just five total plays to navigate 66 and 65 yards respectively. 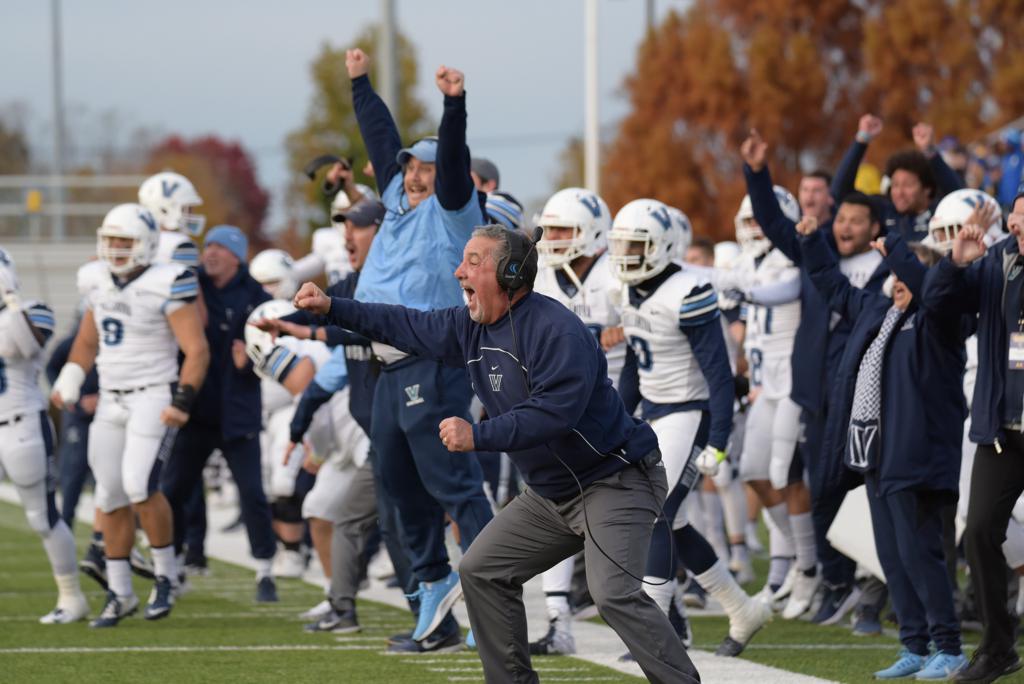 A 64-yard completion from Danny Smith to Daaron Hayek set up a 1-yard scoring run the next play by Jalen Jackson. That gave the Wildcats the lead for good 14-13.

Then on their next possession, a 41-yard completion from Smith to Rayjoun Pringle set up a Smith to Hayek 24-yard scoring pass two plays later.

Rocco probably would add Villanova’s first touchdown drive in the first quarter that took 6 minutes and 16 seconds and ended with a Justin Covington 1-yard run, to his eight-minutes of Wildcats’ offensive dominance.

Villanova’s time of possession was 30:05.

By Rocco’s estimation, about 22 of those minutes weren’t very productive.

The idea is to win the game and on a day the Wildcats weren’t at their best, they were able to win in the 55th meeting is a series they call “The Battle of the Blue.”

Maybe “Battle of the Black and Blue” would be a more appropriate moniker for these two teams where seismic hits such as the one Smith received courtesy of Delaware’s Kedrick Whitehead, could be heard throughout Delaware Stadium.

This football rivalry has everything – two teams in relatively close proximity, two highly successful programs and quite frankly, two teams that don’t exactly like each other very much.

This will be Villanova’s eighth time in the FCS playoffs since 2008. Of course, the 2009 season will always define the Wildcats because they won it all that year and made it back to the semifinals the next season.

So much for past history, Villanova is competing in the present.

Rocco was asked afterwards how he thinks the CAA’s top two teams Villanova and James Madison, will fare in the postseason.

“They both have really good quarterbacks and with that being said they have a chance to have success in the postseason,” Rocco said about both teams.

He was referring to Smith, who began his career at Campbell, where he all he did was set school career records for total offense, rushing touchdowns, passing yards and passing touchdowns.

Smith transferred to Villanova and has been a three-year starter and breakout performer.

Battle of the Blue - Villanova vs. Delaware - PSD Photos by Krystal Williams

Not a bad ratio.

Whether it is FCS, FBS or NFL or sandlot, the quarterback matters an awful lot.

Both teams have ridden their quarterbacks a long distance and each has the ability to go much further.

Of course, if Villanova is to be competitive in the postseason, Smith will have to see an uptick in the accuracy department. In four of the last six games, he failed to complete at least 50 percent of his passes.

The Wildcats will also need their running game, which is prolific, but struggled against Delaware, to get in gear, led by Covington.

Of course the defense will keep the Wildcats in virtually every game. When they needed a big stop, they got it against Delaware.

Fourth-and-goal from the two, Delaware tried a shuffle pass that was stuffed by Villanova’s Qwahsin Townsel and Garrett Zobel, the junior from La Salle College High School, with just 1:06 left.

The Villanova defense also has one of the country’s best corners, Christian Benford, who picked off his seventh pass against in the win over the Blue Hens.

A strong defense and a solid offense can allow a team to go a long way in the postseason.

It sure worked in the regular season for Villanova.

No doubt by now, the patting on the back has stopped.

“Winning the conference was one of our goals, but it wasn’t out end-goal,” Smith said.

Now, there are bigger fish to fry, but Villanova realizes that it will take more than eight minutes of effective offense to do so.