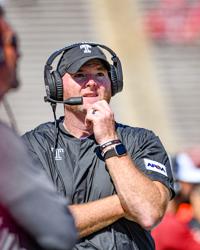 PHILADELPHIA – Temple University Vice President and Director of Athletics, Arthur Johnson, announced today that head football coach Rod Carey has been relieved of his duties and a national search will begin for his successor.

“It’s never an easy decision to replace a head coach,” said Johnson. “The past two seasons have not been easy with the challenges of the pandemic. I want to thank Rod for staying committed to our student-athletes and wish him and his family well in their next chapter.”