PHILADELPHIA- When examining Villanova’s two losses this season, one thing immediately stands out. Losing in overtime to No. 2 UCLA then No. 6 Purdue in the final of the Hall of Fame Tipoff Classic by a total of 15 points is nothing to be upset about but the discouraging part of those efforts is that the opposition handled the Wildcats on the glass.

The Bruins won the rebounding margin by 13 and the Boilermakers had an advantage of 12 on the boards. Controlling the glass is something Jay Wright’s teams had prided themselves in for years. Big men such as Will Sheridan, Dante Cunningham, Mouphtaou Yarou, Omari Spellman and Jeremiah Robinson-Earl had been tasked with limiting second-chance opportunities and it led to great success. The issue this season is that Villanova has been playing with a smaller lineup, having 6-foot-7 Jermaine Samuels and 6-8 redshirt sophomore Eric Dixon down low and it has hurt them at times.

On Sunday night, the Wildcats’ bigs dominated on the offensive end and an unlikely addition provided a boost as well. Dixon tallied 11 points and eight rebounds, including five on the offensive glass, as Villanova stormed past La Salle, 72-46 in a Big 5 matchup at the Palestra.

Dixon had eight of the Wildcats 50 rebounds and they outrebounded the Explorers by 20 for the game. It was the first time this season they held a 20-rebound margin over an opponent and the first time with 50 total boards since Nov. 5, 2019 against Army.

Dixon converted Villanova’s second bucket of the night with a smooth drop step to the baseline and a patented left-handed finish off the glass in what became a regular occurrence for the young forward.

After sitting out his freshman season and getting a taste for playing in Wright’s system last year, including against eventual champion Baylor in the NCAA Tournament, Dixon looks to have found his rhythm.

Wright stresses it has not been without continued development on the defensive end and remaining focused on his frame.

“He had a great summer and worked on his diet with our strength-and-conditioning coach,” Wright said. “He spent time with our assistants on his individual game. I think he’s only scratching the surface of what he can be. He has a lot more work to do and I know he can get a lot better. He’s really coachable and he’s got a great open mind for improvement.”

Dixon has started all six games this season and could be the key to the Wildcats hopes of another deep run in March. He corralled a Caleb Daniels (11 points) miss inside and converted the put-back to put Villanova (4-2) up 18-7 at the 11:24 mark of the opening half. A few possessions later, he drilled a three-pointer from the wing to give the Wildcats a 14-point advantage.

The two-time Pa. All-State Class 6A Player of the Year had a phenomenal career at Abington High School, winning three straight District 1 titles. As a senior, he averaged 27.9 points and 11.6 rebounds and became the first 2,000-point scorer in program history (2,454 career points).

Once one of the most talented players in the area, Dixon is finally putting it all together and his evolution is due in part to the tutelage of a veteran Wildcats big man.

“Dhamir [Cosby-Roundtree] has a lot to do with that because he spends a lot of time with him in individual work and everything we do,” Wright said.

It was a special night for the former Neumann-Goretti standout who had been taken off the active roster in September but remained on scholarship. Cosby-Roundtree dealt with a series of major leg injuries and had been moved to an off-court role, according to the team. No one expected the 6-9 forward to play but when he hit the floor at the 13:44 mark of the first half, Wildcats and Explorers fans alike stood up and gave him a standing ovation. 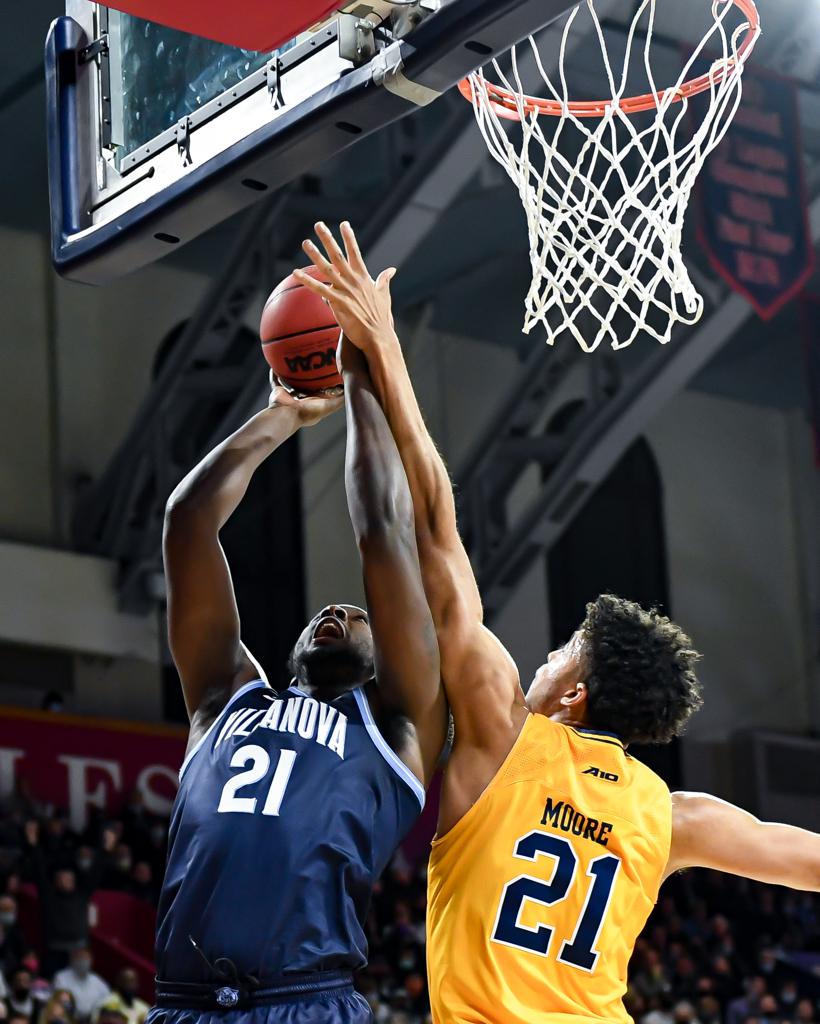 Villanova Graduate Student Dhamir Cosby-Roundtree, a Neumann-Goretti standout, returned to the floor at the Palestra after not seeing game action since March 2020 due to injury - PSD Photo by Mike Nance

For Cosby-Roundtree, it simply felt good to play the game again.

“Physically, I didn’t feel any pain,” Cosby-Roundtree said. “From the basketball aspect, I just want to get back and gain more experience and playing time. Hopefully, I can get better at the things that we do.”

He recorded two points, two rebounds and an assist in five minutes and 55 seconds in his first action since March 7, 2020 against Georgetown. Following a career at Neumann-Goretti where he scored 1,254 career points and won three PIAA Class 3A titles, Cosby-Roundtree has been a member of the rotation at Villanova since his freshman season and giving him the opportunity to play once again was something Wright relished.

“We put him in there and he wasn’t supposed to be able to do this but he wanted to play,” Wright said. “He said, ‘Let’s give it a shot.’ For not having played for a year and a half, I thought he looked really good.”

With the uncertainty or longevity of Cosby-Roundtree’s physical condition, having him out there for one night was monumental and helping limit the Explorers (2-3) was an added plus.

After taking a 25-point lead into the locker room at halftime, Villanova continued to pour it on. Dixon scored the first bucker in the second half. Collin Gillespie (Archbishop Wood), who finished with a team-high 13 points, nailed one of the Wildcats 11 three-pointers to push the lead to 52-21 with 17:04 left to play. On the ensuing possession, Cosby-Roundtree pulled down an offensive board and found Chris Arcidiacono for a trey.

La Salle head coach Ashley Howard, whose team had outrebounded the opposition in three of their five games this season, stressed that the Explorers need to take this loss as a focal lesson.

“Our guys got a firsthand look at what it looks like to play against high-level athletes who are playing hard and with a certain sense of urgency,” Howard said. “It was a wakeup call for our guys and I think they needed to feel what they felt tonight. I hope we’ll use this to make us better.”

The Explorers best run of the night came in the second half when sophomore Jhamir Brickus (Coatesville) hit a three-pointer then finished a tough layup past Gillespie to cut the deficit to 57-31 at the 14:29 mark. He added a second trey a few possessions later and the lead was at 25 but remained too far out of reach.

The Wildcats imposed their will for one night and will return with another opportunity to build on their front court success against Penn on Wednesday right back at the Palestra. Villanova is 21-5 at the Cathedral of College Basketball under Wright with its last loss there coming at the hands of the Quakers in Dec. 2018.