VILLANOVA, PA -- He had just finished his brilliant career following a 35-21 FSC quarterfinal loss to South Dakota State and Villanova University star linebacker Forrest Rhyne, a fifth-year graduate student, was asked to try to sum up what it has meant to him to be a part of this program.

Answering that question was as difficult as dealing with the formidable South Dakota State ground game, but just like in the game, Rhyne gave it his best.

“I mean, it’s been everything,” Rhyne said after recording 21 tackles for a second consecutive playoff game.

Everything pretty much explains it.

Rhyne was the Colonial Athletic Conference Defensive Player of the Year, his Villanova team made the FCS playoffs in two of the final three seasons and suddenly, it was over, both the season and his career. 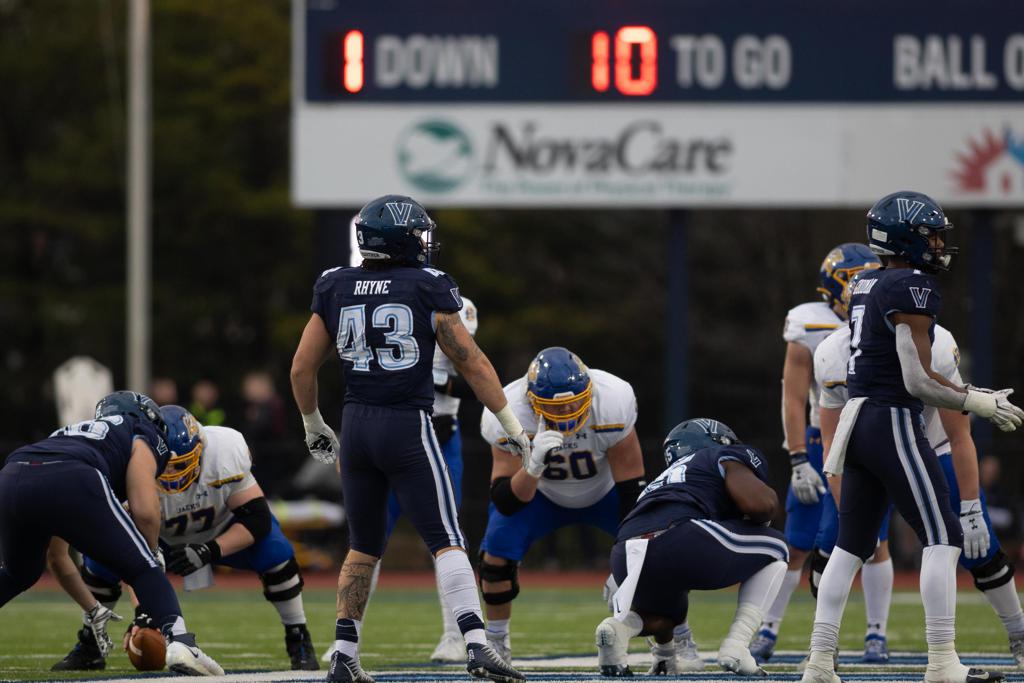 Yes, these big tough football players were breaking down, showing emotions that only their teammates were allowed to see because the abrupt ending to a season always tugs at the emotions.
Especially since a win would have put the Wildcats two victories away from winning a championship.

This one especially stung for Villanova due to the veteran makeup of the team.

Because the NCAA did not count last season’s COVID-shortened campaign on a player’s eligibility, many college football teams, consisted of a larger number of older players.

Villanova was among the group.

The Wildcats had 20 graduate students on the roster, 10 fifth-year seniors and 10 sixth-year seniors. Fifteen of those twenty spent their entire time at Villanova while five were transfer students who played elsewhere before joining the Wildcats’ program.

Both Rhyne and sixth-year running back Justin Covington, were three-year captains.

“It’s rare to spend this much time with these young men, usually you see them for four years, maybe five, but now you see a couple more for an extended period of time and you just continue to build these bonds and relationships and you get closer to them,” Ferrante said. “They get closer to each other and then you have a finish like this...”

He went on to state the obvious, that there is only one team that ends the season truly happy and South Dakota State is one of four that has a chance to do so.

The Jackrabbits know what it is like to be in this position, playing meaningful football so late in the season. They advanced to the finals during last FCS season, which due to COVID, was played this past spring. The Jackrabbits lost to Sam Houston State, 23-21 in the final.

Now they will visit Montana State in Saturday’s 2 p.m. semifinal.

This will be the third straight road playoff game after SDS won at Sacramento State and Villanova.

California, Pennsylvania and Montana, that is some travel itinerary, but one gets the impression that SDS doesn’t mind the extra frequent flyer miles.

If there is any consolation, Villanova got beaten by a true juggernaut.

Even though South Dakota State (11-3) was just 8-3 in the regular season, one of the wins was a 42-23 victory over FBS Colorado State, a team quarterbacked by former Temple QB Todd Centeio.

Maybe the focus wasn’t always there for the Jackrabbits in the regular season, but it sure is now.

“Losing three games, it was hard to be a seed, but in our eyes, we felt we should have been the No. 1 team, even with three losses,” said SDS quarterback Chris Oladokun, who had previous college stops at USF and Samford.

SDS is a program that has made the FCS playoffs ten straight times, including 2016 when the Jackrabbits eliminated Villanova,10-7 in the second round, which turned out to be Hall of Fame coach Andy Talley’s final game with the Wildcats.

So, when Villanova led 21-14 at halftime on Saturday, with two Dan Smith touchdown passes of 37 yards to Rayjoun Pringle  and 55 yards to Jaaron Hayek and a 7-yard scoring run from the Wildcats quarterback, South Dakota State never blinked.

Forget the fact that early in the first quarter, the Jackrabbits lost running back Pierre Strong for the game due to an injury. Strong only entered the game leading FCS with 1,575 rushing yards.

Without Strong, option No. 2 wasn’t a bad option. Sophomore Isaiah Davis rushed for 174 yards and three touchdowns on 25 carries. Not one of those 25 carries went for a loss.

“It’s really not me, it was the O-line, they did a great job,” Davis said.

While he was being overly modest because the 6-1, 220-pound Davis was a combination of power and speed, he had a good point about the offensive line. SDS rushed for 266 rushing yards and passed for another 152. The offensive line averaged 6-5 and 306 pounds.

Not only was the offensive line a force but the Jackrabbits often used two tight ends in 6-5, 255-pound sophomore Tucker Kraft and 6-7, 250-pound junior Zach Heins.

That’s a lot of beef.

When asked where that offensive line ranks among those he has faced in his career, Rhyne didn’t hesitate.

South Dakota State’s defense pitched a second half shutout. In the first half, the Jackrabbits were burned by the pass, and in the final two quarters began dropping more players back, daring Villanova to run. The Wildcats couldn’t do much of anything on offense in the second half, while SDS got two, two-yard scoring runs by Davis, sandwiched around a 38-yard touchdown pass from Oladokun to Jaxon Janke.

So, Villanova ended the season 10-3, tied James Madison for the Colonial Athletic Conference title and beat JMU in their head-to-head matchup. 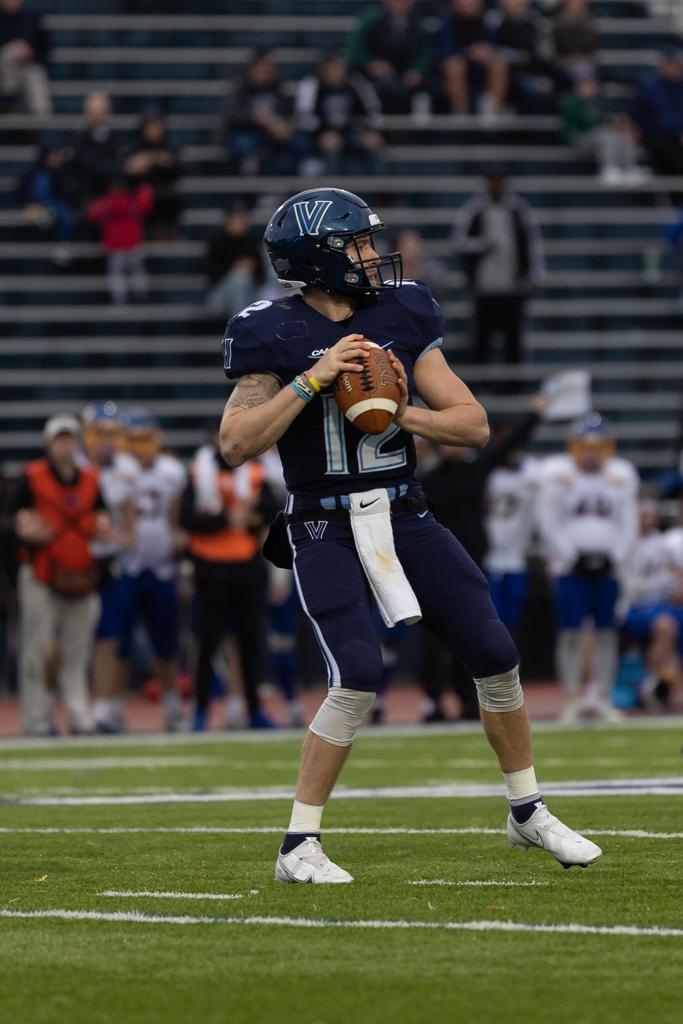 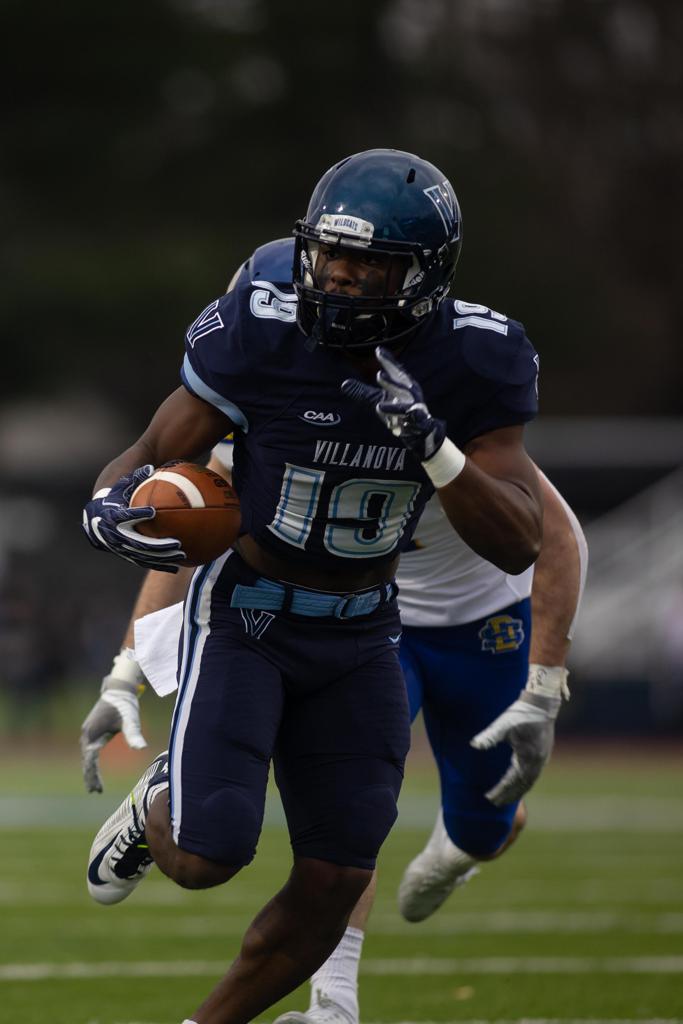 Villanova WR Rayjoun Pringle made a 37-yard TD to tie the score 7-7 in first qtr. (photo/Geanine Jamison for PSD)

The Wildcats beat four ranked teams this season and their CAA title was their first since 2012.

The season by any stretch is considered a resounding success. Reaching the final eight is no easy feat.

Yet, trying to tell the players this was a successful season was a difficult talking point shortly after many of them hung up their uniform for the final time representing the Wildcats.

Exits are usually painful and for Villanova, this one was no exception.