PHILADELPHIA — In the William Penn Charter School community, the concept of legacy is a constant companion. With every step through the school’s hallowed halls, with each glance around its ancient corners, the history is so loud that if you listen closely enough, you can almost hear the faint whispers of those who paved the way from preceding centuries.

It can be easy to get lost in the enormity of it all, especially as the years turn to decades. After all, when you’ve been around since the seventeenth century, there are countless stories to tell and not enough time or words to give them all their proper shake.

Luckily enough, legacy lives forever, especially in this place, and no matter how much you accomplish at other stops in your life, Penn Charter’s 322-year-old memory never, ever forgets.

Which brings us to William “Speedy” Morris, the legendary Philadelphia high school and college basketball coach who won more than 1,000 career games at four storied institutions over a career that spanned more than 50 years. Ask one hundred people to tell you something about Speedy, and you’re likely to get that many different answers; however, many would likely include anecdotes from Saint Joseph’s Prep, Roman Catholic or La Salle University, the three schools where Morris spent the majority of his illustrious career.

Wedged into the early chapters of the Morris basketball story are two seasons as the head boys’ basketball at Penn Charter from 1982-84. Prior to that, he had already coached for more than a decade at Roman — his first year as a head coach began in 1968 — and after he left the Quakers he spent another 35 years at La Salle (1984-86 coaching the women’s team; 1986-2001 coaching the men’s program) and Saint Joe’s Prep (2001-20).

On the surface, Speedy’s Penn Charter years appear as a blink-and-you’ll-miss-them blip to outsiders. But to some inside Penn Charter’s brand new, sparkling Graham Center Athletics and Wellness Center this past Friday night, the lasting impact of the early-to-mid-1980s still feels like yesterday.

Many members of those two Morris teams — the second of which won an Inter-Ac championship in 1984 — banded together to establish the first annual Speedy Morris Invitational Tournament, and the man himself was on hand to see it. Between the boys’ and girls’ basketball games, the school honored Morris in a ceremony at mid-court, thanking him for his service at the school and gifting him with a commemorative plaque. Additionally, two coaching chairs emblazoned with the words William Speedy Morris will sit at the front of each bench.

“In just two years as head coach, Speedy Morris made an incredible contribution to the lives of our students,” Penn Charter Head of School Darryl J. Ford told the assembled crowd. “For our students here, sometimes it can be easy to forget the people whose shoulders we stand on, but Speedy cared about his students on and off the court. He is a Philadelphia basketball legend, but more importantly, a wonderful person who affected the lives of so many. Whether that was on the basketball court or helping someone get into college or out of a troubled situation, that is Mr. Morris’ legacy.

“At Penn Charter, we talk about educating students who live lives that make a difference, and Speedy Morris has lived a life that has made a difference.”

Morris, who turns 80 in April, retired from coaching at the end of the 2019-20 season. Before the ceremony, he sat courtside surrounded by family that included his wife, Mimi; his son, Keith; and several grandchildren. When his moment came, Morris walked to center court standing alongside Keith as Ford and former players Andy Vye OPC ‘83 and Joe McGarvey OPC ’84 shared stories of Speedy’s brief time at Penn Charter that has left an enduring legacy spanning almost 40 years for those who lived it.

“I want to thank Dr. Ford and everyone who made this moment possible,” Morris said in a brief address to the crowd. “And thank you to the players who played for me. Those were two great years, and even though I moved on (to La Salle), I would’ve liked to have stayed here longer. I’ll never forget these guys, and this is a great place that I love a lot. This is great, amazing, fantastic…thank you very much.”

Vye and McGarvey helped get the process of staging the Speedy Morris Invitational rolling about two months ago. To, listen to them tell it, the 41 games Morris won at Penn Charter represent more than just a footnote in his coaching career, simply due to the fact that he helped turn a team with very average talent into champions in just two seasons.

Of all the impressive coaching jobs Morris did over the years, his time at Penn Charter has to rank near the top, simply because of the kinds of athletes he had at his disposal. 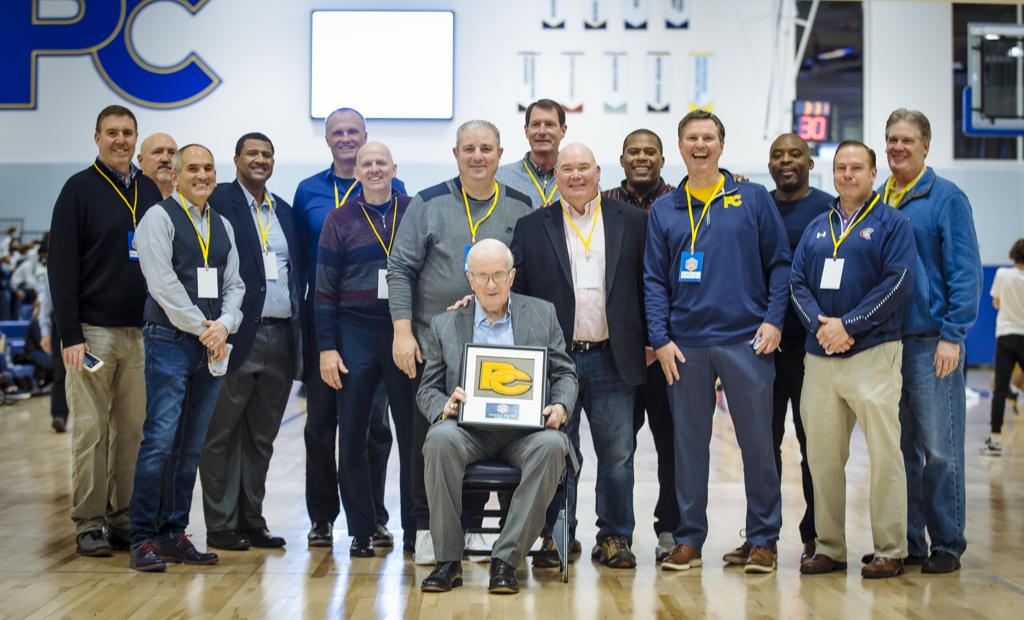 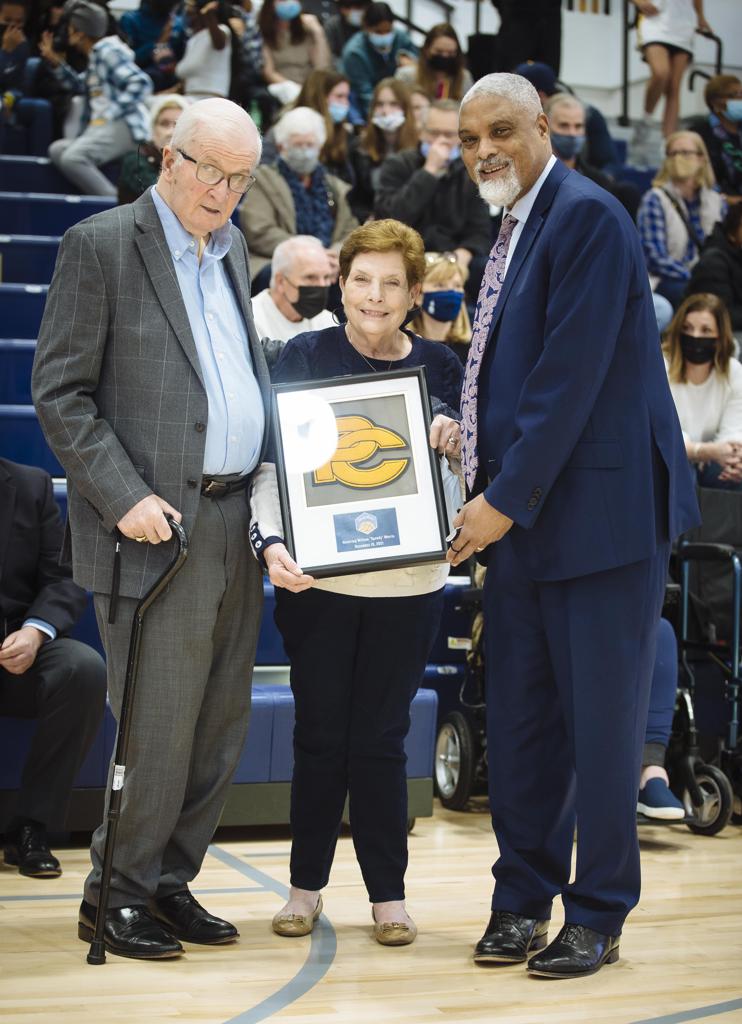 “What people forget is that when he came to Penn Charter, he was already a legend,” recalled Vye, a professional basketball agent. “We were wondering why he was coming to coach us, and he was probably thinking the same thing himself, because we didn’t have a whole lot of talent. It was an instant culture change. We went from playing basketball to working.”

Morris put in the time with his teams, taking them across the street to what was then Philadelphia Textile College to work out with another local coaching legend’s — Herb Magee — teams. Morris would also have his Penn Charter teams hit the camp and clinic circuit from Philadelphia to Saratoga, N.Y., in the summertime, with the whole point being to show his players the extra work required to succeed in life.

On the court, Morris was always “tough, but fair,” according to McGarvey. Practices were grueling and almost always three hours, double the length of what the players were accustomed to. If you missed an easy layup, then it became an automatic reflex to hit the ground for some push-ups. This wasn’t punishment, but rather a lesson on attention to detail, showing the players that a lot of little things add up to what become championship campaigns.

Former player Andy Vye OPC '83 recalls when he found out about Speedy coming to coach at Penn Charter. (video/Ed Morrone)

It wasn’t just the basketball court where players like Vye and McGarvey benefitted from Morris’ tutelage, either. Far from it. In separate conversations, each man told different variations of the same story that tells you everything you need to know about how Morris cares more about the person than he does the basketball player that inhabits that person.

Morris, who grew up in Manayunk, resided in neighboring Roxborough as an adult. He owned a bar in the neighborhood, and each year, he would take a senior player under his wing. This process included 7 a.m. wake-up calls to work at the bar, performing menial tasks such as cleaning bathrooms or sweeping floors, done to teach Vye and McGarvey responsibility and accountability. After, he would take them a few blocks away to Kelly Park, where he would drill them on the concrete courts.

The fun came later. Whether it was taking his players to watch horses at the racetrack and teaching them how to bet an exacta, Chinatown for dinners or the Palestra to watch a basketball game after practice, Morris went above and beyond a typical coach’s responsibility. Morris even taught McGarvey how to drive and accompanied him to his driver’s license test when McGarvey’s father was busy working.

“He put me in his car, and whether it was a camp 10 miles away or all the way up in Saratoga, he had me drive and he lounged out in the backseat,” McGarvey recalled. “Even with something like driving, he was trying to give me the confidence and responsibility I needed.”

McGarvey went on to play college ball at Lehigh and lived in Germany for a period after he graduated. By then, Morris was coaching at La Salle, and sure enough, McGarvey would check his mail across the Atlantic and sometimes find a handwritten note from Morris accompanied by a package of La Salle basketball swag. 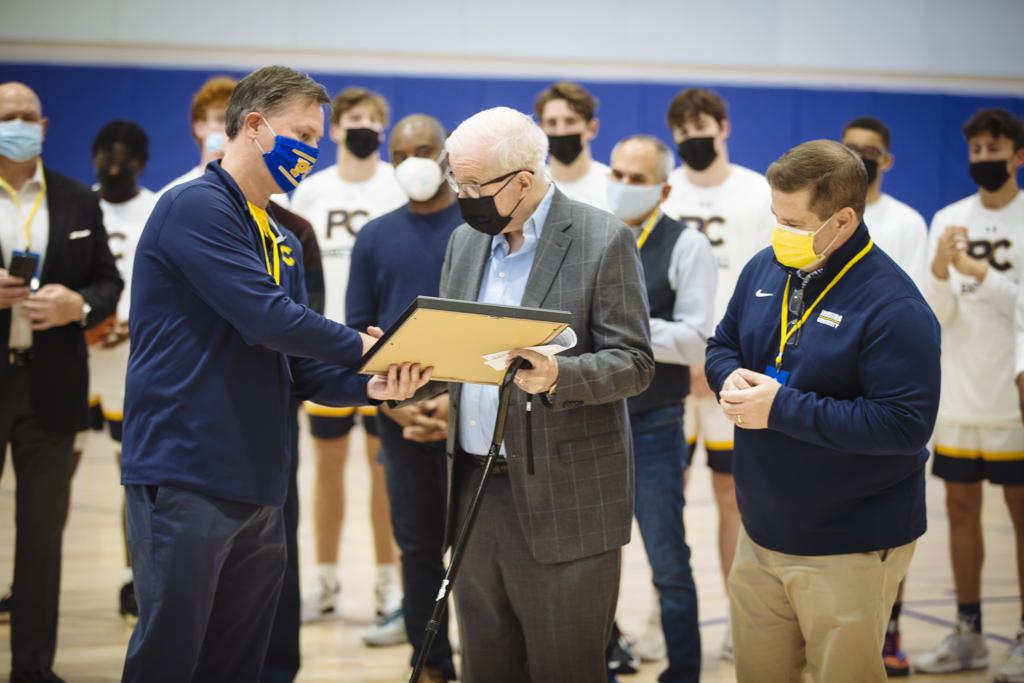 “I will always be grateful for him,” McGarvey said. “The camaraderie to this day is pretty neat, and I really can’t say enough good things about him.”

Vye told a similar story about how when he had his very first job interview in the basketball industry, Morris called the company and told them that Vye was one of the hardest working players he ever coached. Vye got the job.

“This basketball community is so tight around Coach Morris,” Vye said. “He really gave me a boost, and I never had a coach who took that kind of interest in me. We believed we always had a chance, and that was because Speedy Morris was our coach. He set me off on a direction in my life that I am still in, having spent more than 30 years with a career in professional basketball.”

The 41 games Morris won at Penn Charter were the fewest at any of his stops, two less than the 43 he tallied while coaching the La Salle women’s program from 1984-86. He won 347 at Roman from 1968-81, 238 as La Salle’s men’s coach (including four NCAA Tournament appearances and a 30-2 season in 1989-90 that still lives on in Philadelphia basketball lore) and another 366 at the Prep the last two decades.

Head of School Darryl J. Ford expresses the impact Coach Morris had during his time at Penn Charter. (video/Ed Morrone)

It’s why legacy matters so much at a place like Penn Charter, where luminaries such as Morris may move on to greater heights in other places but will never be forgotten for what they did here, no matter how brief or long ago.

“You hope that when you are done your service, whether as a teacher, a coach or a director, that students come back and say that you made a difference in their lives,” Ford said later in a private conversation after the ceremony had ended. “That’s what happened with Speedy and his players on and off the court. He changed their lives. He made a difference.