PHILADELPHIA--There is no doubt that Stan Drayton won the press conference. Now winning games at Temple will be a much more challenging endeavor.

Drayton was introduced as Temple’s 29th head football coach on Thursday and while he was talking to the Temple community, indirectly, he was also delivering his message to the parents of potential future recruits.

Drayton was genuine in his care for the development of the youngsters he will coaching, not only as players but young men. He was forceful, confident and gave the type of initial presentation that should lead to a pathway to many recruits’ homes.

Drayton, who turns 51 in March, is somebody who served as an assistant in college football and the NFL for 28 years, somebody who truly paid his dues.

He even said how he interviewed before for the Temple head coaching job, one that went to Matt Rhule.

Most recently, he was the running backs coach at Texas, where his path crossed with new Temple athletic director Arthur Johnson, who was the senior associate Athletics Director of Administration and Operations for the Longhorns since 2014 before being hired this fall at Temple. 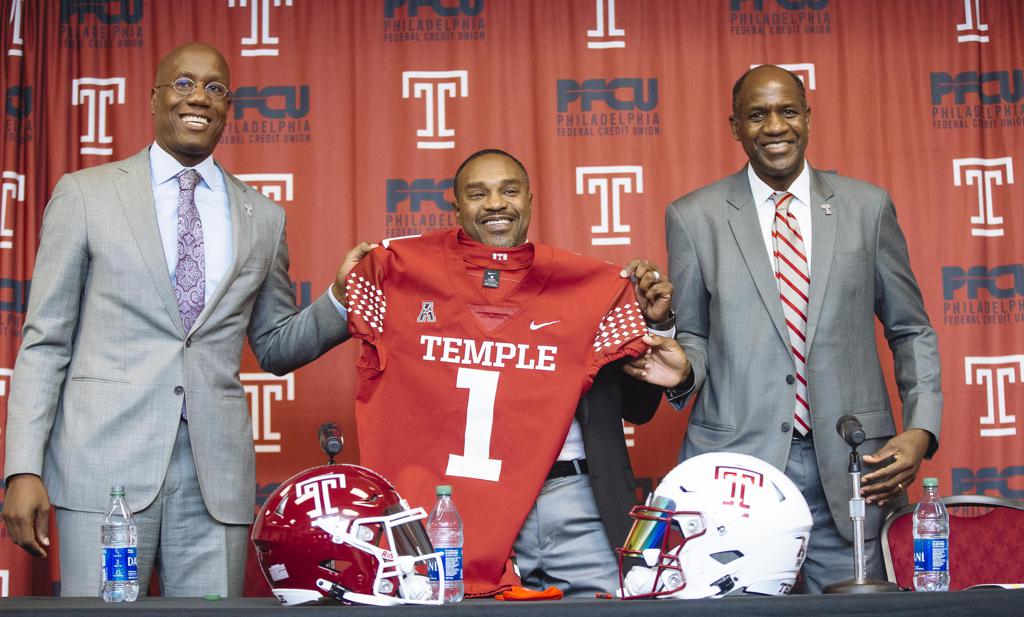 The public recommendations and testimonials Drayton received have been impressive.

He coached former Eagles great Brian Westbrook at Villanova. On Twitter, Westbrook stated, “I can’t say enough great things about Stan Drayton! He saw through my injuries and brought me to Villanova, he helped turn me become the player and more importantly the man that I became!! I can’t wait to see him transform this program!!”

From Bijan Robinson, one of the top running backs in the country who Drayton coached at Texas: “So happy for this dude right here! It’s been a hellava two years with you coach and God put you in my life for a reason to grow as a player and a Man of faith. I love you man and Temple got the best coach out there. You deserve the world and they deserve you.”

Those are some heavyweight testimonials.

So, in short, everything about Drayton is impressive.

He coached in the area at Penn and Villanova and knows about the talent, understands the best way to succeed is to recruit successfully in your own back yard.

Nobody doubts he can coach up a storm. He was known as a great running backs coach and recruiter.

Now he gets to run his own program, something that has been a long-time goal.

“I always wanted to lead men on a large scale,” he said during the Thursday press conference.

It was at this press conference that he was introduced with the band playing, the audience clapping, a fan base that has seen the program take a serious u-turn downward the past two years, hoping that he will return Temple to the success it enjoyed in the not-too-distant past.

People may forget that in 2019, the first year of Rod Carey’s three-year run, that the Owls went 8-5, and earned their fifth consecutive bowl berth.

That team lost 15-13 at Cincinnati late in the season in a game that Temple could have won had there not been, among other things, some special team’s gaffes.

Think about that - less than three years ago Temple was going toe to toe with a Cincinnati team that is now the first non-Power Five school to earn a playoff berth and has gone 22-1 the past two years.

It goes to show how quickly things can go south in college football.

Can a return to prominence be just as quick?

No so fast on that one.

The Owls fandom should settle for slow but steady growth.

Temple has been attempting to replicate the success of Rhule, ever since he left for Baylor and now the Carolina Panthers. In fact, Johnson said that he called Rhule in looking to get insight into the Temple program and what it would take to return to prominence.

Rhule left after the 2016 season, leading Temple to the American Athletic Conference title after losing in the AAC championship game the previous season.

Since he left, Temple has been looking for the next Matt Rhule.

They are better off trying to bring in the first Stan Drayton.

Rhule set the blueprint – hard work, an extra emphasis on toughness, finding diamonds in the rough to come to 10th and Diamond. He was a leader who had his players’ collective backs, and would do anything for them, who made them want to compete for him, themselves, and the university.

Drayton has all the energy, knowledge and apparently charisma to succeed at this job.

All his is missing is plenty of good players.

Temple went 1-6 in Carey’s second season. This year they were 3-2 after an upset win against Memphis and talk of a bowl bid was realistic. Then the Owls lost their last seven games by an average of 34.2 points, and even worse, continued to lose players to the transfer portal.

So, Drayton will have to do some serious rebuilding and his recruiting acumen will desperately be needed. He is competing in the best Group of Five Conference, and even with the future defections of Cincinnati, UCF and Houston, who will join the Big 12 no later than July 1, 2024, the AAC will be strong. 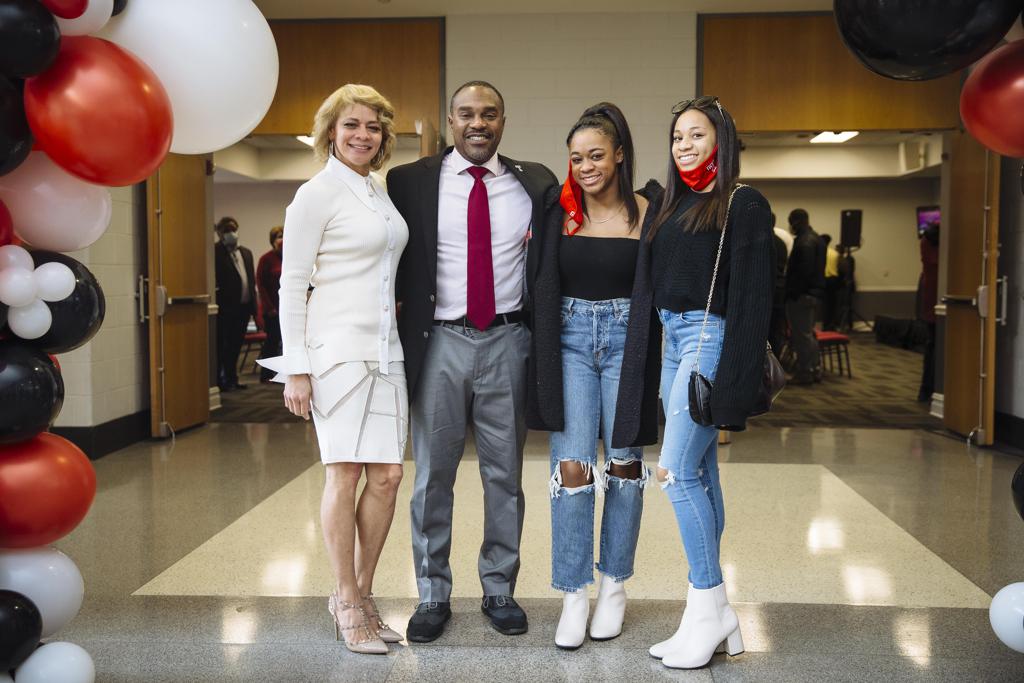 Drayton pictured with his wife and daughters were welcomed into the Temple Family during the press conference and celebration. (photo/Zamani Feelings)

In his opening press conference, Drayton didn’t waste the opportunity to directly address his players. “I am going to try to instill the same fire that I had to get to this point, in you,” he said. “Okay, everybody hear me on that? I am going to need you to carry that flag for me.”

It was all so impressive and now the real work begins.

There are no guarantees, but the fan base has to feel good, knowing Drayton’s credentials, hearing his passion, and seeing how hungry he is to prove that the wait to finally lead a program, should have occurred a long time ago.

Temple has something that wasn’t here that much of the past two years – hope.

For a program that has hit rock bottom, that’s a good start in attempting to earn its way back to football relevance.