BOYS BASKETBALL: Skillings Blossoming into Next Star at Roman Catholic

DREXEL HILL, PA – The last time Chris McNesby was on the sideline for a game against Bonner-Prendergast, his Roman Catholic team boasted three Penn State commits in Tony Carr, Nazeer Bostick and Lamar Stevens along with Paul Newman, who began his career at Bucknell and is now playing at Albany.

That group had length and defensive prowess that began when Newman corralled rebounds and threw outlets to Carr and Bostick, or Stevens, now with the Cleveland Cavaliers, hauled in a board then led the break with ease, generally with a strong finish or an assist. The talent combined with the ability to create opportunities in transition resulted in two Philadelphia Catholic League and PIAA Class 4A titles and allowed the corps to leave as one of the most heralded in school history.

Fast forward seven years and McNesby, who stepped away after the 2015-16 season only to return when Matt Griffin took an assistant coaching job with the Great Danes, might not have the size but this new starting five possess similar qualities as that one which featured four Division I prospects. It all begins and ends with Cincinnati commit Daniel Skillings Jr. 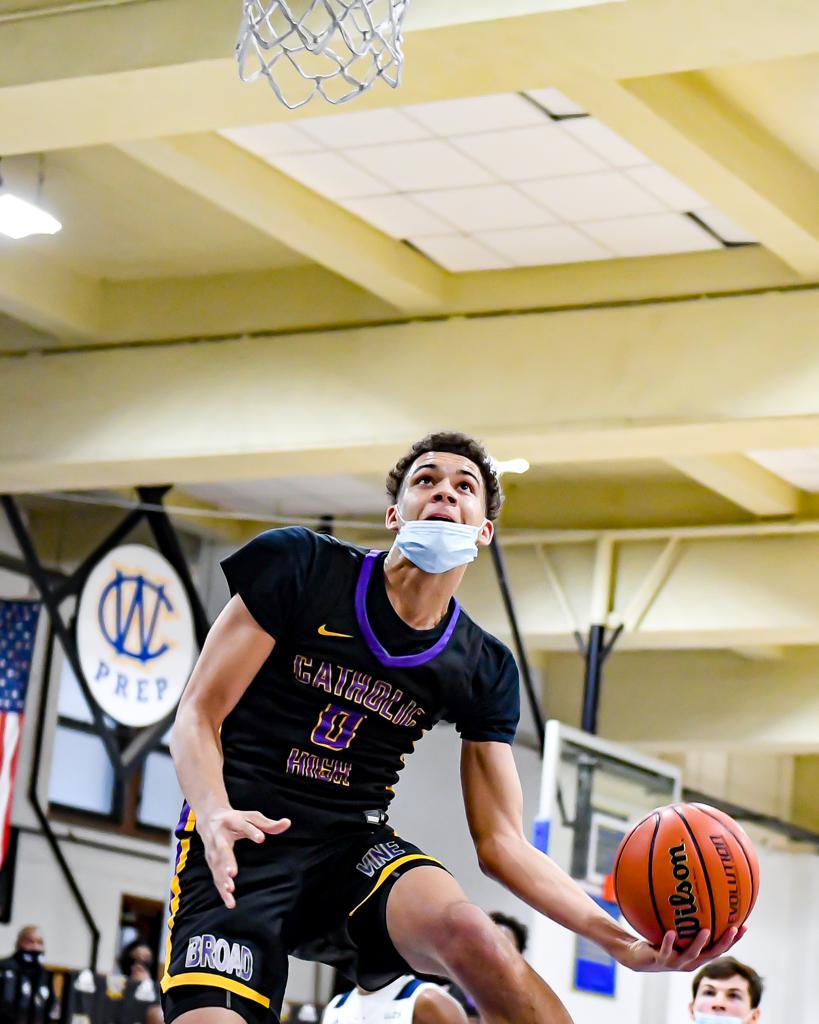 Skillings recorded a double-double with 16 points and 14 rebounds to go along with five blocks as Roman Catholic dismantled Bonner-Prendergast, 65-45 on Sunday afternoon. He scored the first Cahillites basket of the day and turned one defensive rebound after the next into a transition opportunity.

For McNesby, this may be Skillings’ most impressive trait and one that may lead the Cahillites to great heights this season.

“He lets us get out and run,” McNesby said. “When he rebounds the ball, I say to him, ‘Dan, we have a natural break.’ I want him to push the ball and we want lanes. He’s a wing with the ability to rebound. As a coach, it helps because you don’t have to run plays since he can produce a natural offense.”

Skillings burst onto the scene under Griffin in leading Roman Catholic to the Philadelphia Catholic League title game a season ago, but his game has become so much more fluid in year two. Freshman big man Shareef Jackson (five points, seven rebounds) found him cutting for a dunk then two possessions later he drove baseline and threw down another emphatic slam to give the Cahillites a 17-3 lead heading into the second quarter.

Last season, his scoring proficiency is what made him an attractive prospect but now it’s his defense and effort as a facilitator that is allowing him to take the next step forward in his overall game.

“Coach McNesby knows I can score but he likes when I dish it to our wing players who are cutting to the basketball,” Skillings said. “Getting them to the line and involved is very important. He loves when I start the break because we’re usually successful on it.”

Alongside Hofstra commit Khalil Farmer, who had a game-high 20 points, seven boards and three steals, the Cahillites (7-2, 2-0 Philadelphia Catholic League) were rolling. Farmer hit his first three-pointer of the game from the top of the key to push Roman Catholic’s lead to 22-7 at the 5:24 mark of the second quarter. On the ensuing possession, junior Xzayvier Brown, who had missed the previous three games with an ankle injury, found Skillings on a backdoor alley-oop.

A patented play Roman Catholic ran a number of times against the Friars (4-4, 0-2) was a high screen above the three-point line by Skillings, where he rolls to the basket. If the ball handler, in most situations Brown, reads it, he can hit Skillings on a backdoor layup or alley-oop. If Brown is double-teamed, he can swing it to the top of the key where Farmer will be wide open. This play worked to perfection just before the half as Brown hit Farmer for a smooth trey to give the Cahillites a 34-15 advantage.

Skillings, who began his career at St. Joseph’s Hammonton (N.J.), and Farmer, who began at The Shipley School, have been playing together for years dating back to their days with the AAU program, Philly Pride. McNesby understands how their camaraderie extends onto the basketball court and if they’re rolling, the Cahillites are at their best.

“They’ve known each other a long time so their chemistry goes back a little further,” McNesby said. “Dan is that slasher that can get extra shots like tip-ins and things like that. Khalil is a perimeter threat. They feed off each other and seem to know where each other are on the court.”

Sophomore guard Toby Ojukwu (12 points) spurred the Cahillites to begin the second half with four points during a 10-4 run to push the lead to 44-19 with 4:19 remaining in the third. Shakur Smith, Bonner-Prendergast’s leading scorer, had a strong day with 18 points and 11 rebounds. He converted an and-one to cut the deficit to 23 then drilled a three-pointer just before the buzzer of the third. He added three more baskets in the fourth. Ojukwu continued his superb play into the final quarter with a free throw and a tough finish inside to push the lead to 62-31. Brady Eagan added 14 points for the Friars.

Over the last two seasons, Skillings has been one of the most versatile wings in southeastern Pa. and his development during his high school career has been colossal, both as a prospect and as a member of the Cahillites program. These last two years have taught him a wealth about the game.

“I learned a lot about the game, particularly on the defensive end with jumping to the ball then on the offensive end understanding how you’re always moving and cutting to the lane, which plays such a huge part in the game of basketball,” Skillings said. I didn’t know that last year since I only started playing in ninth grade.”

Skillings’ maturation combined with his rapport with Farmer and the reinstitution of McNesby has Roman Catholic hoping to continue a trend that the current head coach was instrumental in maintaining. The Cahillites have played in seven of the last eight league title games and the pieces are certainly in place to make another run at one this season. It all starts with a Skillings defensive rebound to bring it all together.