Inter-Ac - Two dates are circled in bold red. That’s the way it goes when the two best teams are scheduled to face each other twice during the regular season.

No offense to any of the other competition, but there’s really no debate that Academy Of Notre Dame and William Penn Charter entered the season as favorites to compete for Inter-Academic League girls’ supremacy. Now whether or not that narrative pans out is a different story.

Although the global pandemic eliminated any plans of crowning a league champ last season, ND and PC were the unofficial co-champs. The Irish and Quakers each lost one league game – to each other – and finished with league marks of 8-1 and 7-1, respectively. ND handled PC, 54-48; two weeks later, PC responded in kind, 61-57.

As to the aforementioned anticipated dates, the teams’ first meeting scheduled for Jan. 7 was postponed because of weather and temporarily re-scheduled for Jan. 19. The re-match will take place at Notre Dame on Feb. 1.

With a full slate of games scheduled for this Tuesday and Thursday, every team has already played at least once.

At Notre Dame, the Fighting Irish (7-2 overall, 2-0 league) features one of the area’s top talents in Maeve McErlane.13 The second-team all-state senior two-way guard is fewer than 100 points away from a career 1,000 and has already committed to DePaul University. She has averaged 22 points per game thus far.

The Irish knocked off North Raleigh Christian, the fourth-ranked team in North Carolina with a University of Louisville commit. They dropped a heartbreaking 46-41 overtime decision at Archbishop Carroll, one of the Philadelphia Catholic League’s top programs.

"I'm excited about the progress of our younger players,” said fourth-year Notre Dame coach Lauren Power. “We are really starting to mesh as a unit. When you go through adversity with five games canceled, you learn a lot about each other, and this team has shown great perseverance and a renewed sense of commitment to each other." 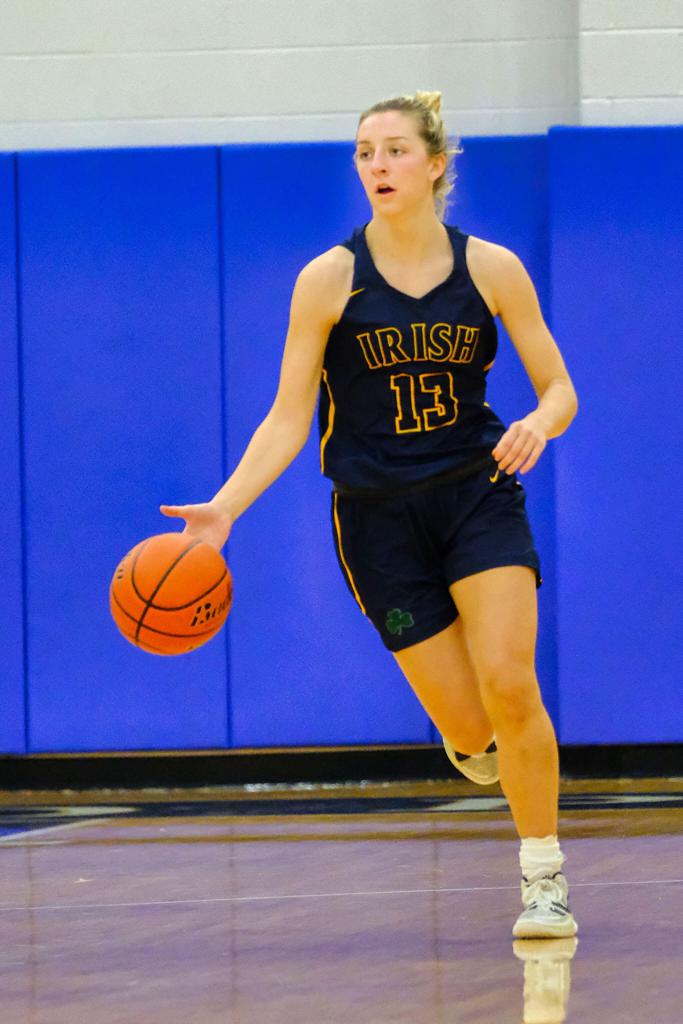 At Penn Charter, the Quakers have already notched a key victory – 58-48 over visiting Germantown Academy – and have also defeated league foe Springside-Chestnut Hill as part of their 5-2 overall record.

“I am excited about how much the team genuinely likes being around one another and the camaraderie that they have,” said Maguire. “They support one another and are happy for each other's success.

“A concern of mine is that we need to push ourselves and others every day in practice. We do not know what each day will bring, and we need everyone to be prepared to step into any given role. We need that effort to consistently be given by everyone in practice.”

Since there was no official champion last winter, Germantown Academy technically remains the Inter-Ac defending champion. The Patriots have not finished second since 2014.

Under the tutelage of legendary coach Sherri Retif, the Patriots will continue to be in the league champion conversation thanks to the return of junior captain Kendall Bennett. The junior captain averages a double-double with 13 points and 11 rebounds.

In addition to freshman point guard Jessica Kolecki, the Patriots showcase standout sophomore guards Jess Aponik, Sam Wade (three-point marksman who is averaging 10 points), and uber-energetic Isabelle Casey. Sidelined for the past four month, Aponik – an all-Inter-Ac selection as a freshman – is shooting more than 50 percent from the field and averaging eight points and four assists per game.

First off the bench are sophomore Jenna Aponik and freshmen Gabby Bowes and CeeJay Thomas.

“I am most excited about the youth and guts of our team,” said Retif. “Our leaders bring mental toughness, defensive intensity, and team chemistry to every play at every practice. They are all extremely coachable and have embraced a growth mindset.  It is just a matter reps and trust before they begin to click on all cylinders.”

At Episcopal Academy, the Churchmen served notice that they might have something to say about the ultimate league standings. As part of their 6-3 overall record, the Churchmen gave visiting Academy of Notre Dame everything it could handle before succumbing, 45-39.

“Episcopal has played with good energy so far through the early stages of the season and looks forward to the challenges ahead in a competitive Inter-Ac,” said coach Chuck Simmonds. “They will continue to look to improve their offensive possessions to maximize the benefit of playing with the shot clock, and look to create opportunities by playing solid defense to create transition opportunities

At Baldwin, first-year coach Devin Walker is committed to the process of patience and fortitude. Though 1-6 overall and 0-1 in the league (a lopsided loss at Notre Dame Academy – played without senior starter Gabrielle Pritzker), improvement is visible.

“Each game we have played progressively better by targeting one or two goals each game to be better at than the previous,” said Walker. “I am most excited about the girls’ overall confidence as we enter each competition. I've watched our confidence grow exponentially throughout and at the core, that's been the main focus.

“As we go into the heart of our league play, I think we are primed to compete at a high level and exceed expectations. My biggest concern is simply my athletes staying healthy throughout the entire season with respect to the COVID-19 pandemic and all the uncertainty surrounding it.”

Along with Pritzker, the Bears rely on senior point guard Kaya Weiser, who is anticipating playing at MIT next year. Brightening the future are junior Grace Brunetto, sophomore Allie Weiser, and the freshman duo of Samantha Neff and Isabella Ahn.

Springside-Chestnut Hill Academy started the Inter-Ac season with a defensive-minded 26-15 win at Agnes Irwin before dropping a decision to visiting Penn Charter. Maya McDermott led the way with eight points and seven assists.

“Once my girls get more comfortable with one another on the court, they’ll begin to see how dangerous they can be,” said SCH coach Florence Hagains. “They are learning that what you do in practice, you’ll do in game. I have so many athletes, but not all ball players.”

SCHA vs. GA game highlightls by James Williamson for PSD.

At Agnes Irwin, new coach Shanette Lee is focusing on the big picture. The Owls came close to a win in their league opener, but a 17-8 third quarter was too much to overcome in a 26-15 loss against Springside-Chestnut Hill Academy. Chole Costello, Katherine Ernst, and Jackie Heinerichs combined for 10 points.

"I'm excited about watching the continued growth of my team as they figure out the new offense,” said Lee. “They are starting to understand, which will allow them to play a little bit more relaxed and let the game come to them.

"I'm concerned that even though we get good looks at shots. we are not making them right now. I know that if we keep doing the right things, the shots will eventually fall.”