FRIENDS LEAGUE: Germantown Friends has gotten off to a quick start this season with a veteran team that has the ability to compete for a championship.

Will the Tigers be the favorite?

Time will tell, especially with the presence of Westtown, but Germantown Friends has the type of veteran team that nobody will want to face in the Friends League playoffs.

The Tigers opened the week 8-2 overall and opened their Friends League schedule with a 35-28 victory over Shipley. Watching highlights of this game,  Germantown Friends showed great tenacity on defense, which will be the Tigers’ calling card.

It was the first time since coach Mike Lintulahti has been at Germantown Friends (2015) that The Tigers have won at Shipley.

Leading the way on both ends of the court is Clare Meyer, a 6-3 senior who will continue her education and basketball career at Dartmouth. Lintulahti says she is the first Division I player out of Germantown Friends in 20 years

The 6-foot-3 Meyer had a monster double-double against Shipley, 13 points and 17 rebounds. And as the highlights show, she was also a defensive presence.

Senior Martina Kiewek is a sharpshooter, who is especially accurate with a corner three-pointer. She will be attending college next year in the Netherlands and try to play club or semi-pro basketball.

Her parents are in Spain and Martina is staying with Meyer and her family.

Yet another senior, 5-11 Cadence Kelly, has been a four-year varsity starter.

“She has been a glue kid for us,” Lintulahti said. “She is a vocal leader for the program.”

The key to the team has been the veterans.

“I just have an incredible senior class,” Lintulahti said.

There are contributions from non-seniors, especially Nddaia Blakney, a 5-7 junior. She hit two key three’s against Shipley to help spur the win.,

“We don’t win that game without her,” Junior Carolina Putnam a 5-8 junior who is also a soccer standout, has also been contributor. 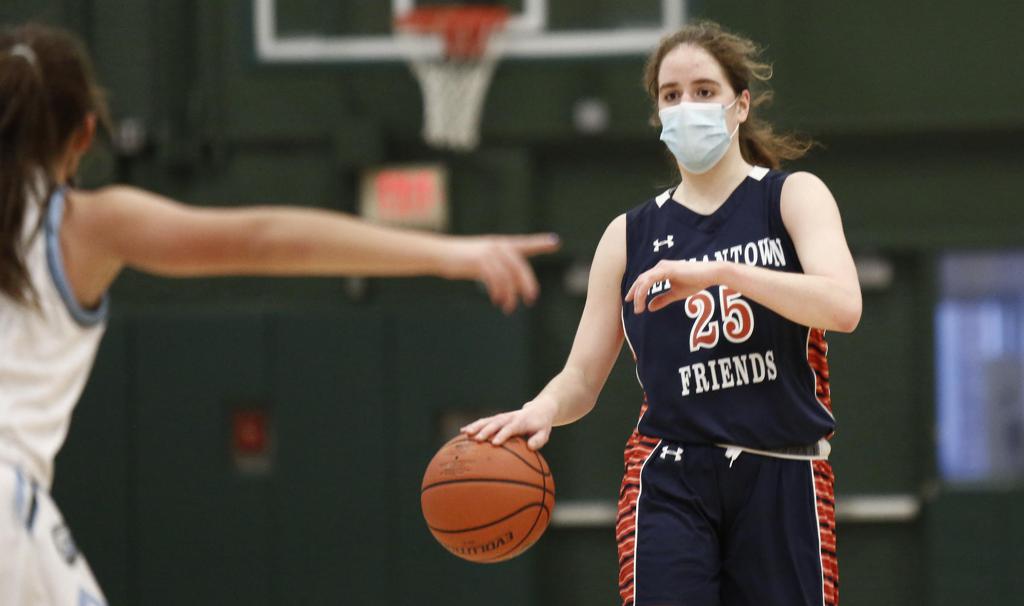 There was no letdown after the win over Shipley as Germantown Friends scored a 61-24 non-league victory over Central. In that game Meyer contributed 20 points and 13 rebounds.

“I like my team,” Lintulahti said. “We are playing well together and look to continue to improve.”

Westtown opened the season 8-3 overall and had a 70-9 win over Friends Select to begin its Friends League schedule.

The Moose are led by 6-1 senior Kaylene Smikle. In the first 11 games she was averaging 22.2 points, 8.0 rebounds and nearly one blocked shot per game.

She has great range on the three-pointer and can hit from all parts of the court.

After that, the scoring is balanced, but where Westtown shines is on the defensive end.

The three losses were close defeats to strong out-of-the-area program. They losses were 55-53 to St. John’s of Washington, DC; 52-50 to McDonogh of Owings Mills, Maryland and 60-54 to New Jersey’s Blair Academy.

That type of strong non-league schedule will surely benefit Westtown, who at least in the second week of January, are clearly considered the team to beat in the Friends League.

Abington Friends opened with a 52-37 win over Moorestown Friends. This is a young Abington Friends team, although senior Hannah Rhoades will provide plenty of leadership and points. An Arcadia commit, Rhoades scored 21 points in the win over Moorestown Friends, while Sakinah Abdus-Salaam added 13 and Aniyah Hayward scored nine. This came a game after Hayward scored 27 points in a loss against Nazareth Academy.

In these highlights of the win, look at the outstanding range Rhoades has on her J. She also has a quick release which makes defending her that much more difficult.

One of the unsung heroes in the Moorestown Friends win was Kyleigh Kilpatrick, who took three charges, the type of effort that may not show up on the stat sheet, but is invaluable toward winning.

Moorestown Friends has a young team and likely will be rebuilding this year, but the development of guard Sophia Rutherford will be something to monitor. Rutherford had 19 points, seven rebounds and three assists against Abington Friends while senior Blythe O’Connor had a team-high 13 rebounds to go along with two blocked shots and two steals.

Key win for Academy of the New Church:

Academy of the New Church opened its Friends League schedule with a 42-39 nail-biter over Shipley.

The one-two punch of sophomore Xola Wade and junior Oniya Osborne proved to be the difference.

According to coach Rashim Lancit, the defensive player of the game was sophomore Adrianna Frank who had 11 points, seven rebounds and five steals.

Due to COVID, Friends Central had a long break and had been off more than three weeks before opening its Friends League schedule with a 60-31 win over the George School on Jan. 11.

Winning coach Phil Annas said there was plenty of rust with this team, but he was happy to get the W.