BOYS LAX: Inter-Ac Showdown Lives Up to its Billing, While Overtime Victories & Key Wins Abound in This Week’s Notebook

Inter-Ac showdown lives up to its billing

The anticipated rematch between Haverford and Malvern Prep had an almost similar first half as their first meeting.

When the teams opened their Inter-Ac schedule on April 12 at Haverford School, the host Fords earned a 5-4 halftime lead.

The game suddenly changed when Malvern Prep outscored the Fords, 5-1 in the third quarter in an eventual 13-6 victory.

Fast forward to this past Friday and the two teams played to a 4-4 score at halftime.

In the third quarter Malvern Prep scored the first five goals and a rout seemed possible.

Haverford School came back, getting to within one goal in the fourth quarter. Even after falling behind 13-10, the Fords scored twice and had a chance to tie it, but Malvern Prep came up with the final clutch defensive effort.

So Malvern Prep held on to a 13-12 victory that looked every bit like it was between two of the best lacrosse programs in the Philadelphia area and maybe beyond.

“It’s always so close, especially the second time, it’s hard to beat that team twice, there are so many great players on that team, I played with a lot of them all the time,” said Malvern Prep senior Joe Sheridan, who led the Friars with three goals. “It was nice to pull it out there at the end, a great defensive stop.”

If the first game between these two seemed like a playoff game, imagine how this tight affair appeared.

“This is like my favorite games against Haverford,” said Sheridan, who is a Richmond commit. “It’s always a playoff game, it seems.”

Malvern Prep goalie Joey Doherty, who made 12 saves said the Friars did a good job managing the highs and lows that occurred during this game.

A program as accomplished as Haverford School isn’t into earning moral victories but coach Brendan Dawson saw positives in the way the Fords fought back to make it not only a game, but the best one of this Inter-Ac season.

“Our guys played hard and didn’t quit and believed they could get back in it and created their own bounces,” Dawson said. “So that was encouraging.”

Even being on the losing end, Dawson could appreciate the talent and heart that both teams displayed.

When asked about the biggest reason for the comeback, Dawson pointed to faceoff man Ben McCarthy who caught fire in the second half.

“Ben McCarthy did a really nice job figuring it out as the game went along,” Dawson said. “He had a couple of cold stretches but he battled right through them and he kind of got going as the game went on.”

McCarthy was 13 of 24 on faceoffs and he also had eight ground balls, one goal and one assist.

Besides Sheridan, Ennis Udo, Ryan Falkenstein and Jack Irish each had two goals for the Friars, and Dylan O’Connor, John Majka, Mike Ortlieb and Pat Mears each scored once. 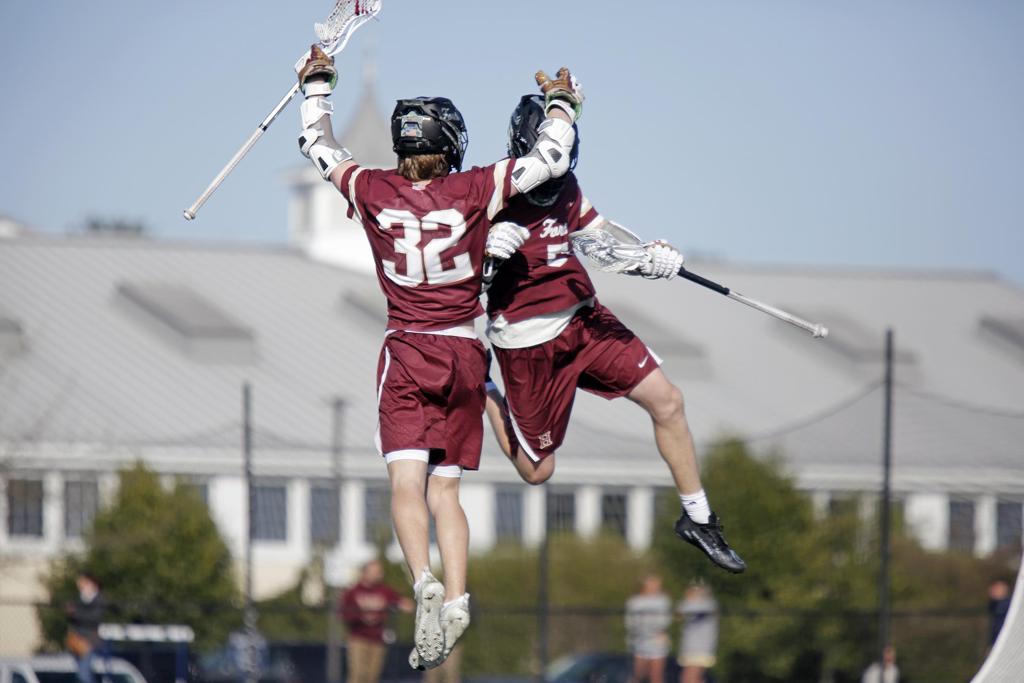 In the second quarter, Malvern Prep junior AJ Nikolic, among the top players in the Inter-Ac, left the game for good with a shoulder injury.

Coach John McEvoy didn’t have an update on Sunday.

These teams are destined to meet a third time, which could be in the Inter-Ac championship. At this point, they have proven to be the top two teams, although Episcopal Academy, could have a say in things as well.

Penn Charter’s Gavin Michener has enjoyed a strong sophomore season and he went into overdrive in helping the Quakers to their first Inter-Ac League win, 14-10 against visiting Springside Chestnut Hill Academy.

Michener scored a career-high eight goals, along with one assist.

It turns out that was his career high on any level, not just high school. He said the most he has scored in a game before that was five.

“It feels good, especially with a lot of people out here, your teammates cheering you on,” Michener said afterwards. “It gets you going and makes you want to get more.”

How many more could that be?

It turns out that Michener has been steadily progressing.

Teams often put a lot of defensive pressure on his brother Colin Michener, a senior who is headed to Villanova. Opponents are finding out that Gavin is a major offensive threat in his own right.

“Gavin had a great game and hats off to him he had eight goals and he was obviously the difference in the game,” SCH coach Brian Dougherty said.

More than the career high, Michener was happy help the Quakers earn their first Inter-Ac win of the season. Penn Charter still has visions of making it to the league playoff where the top four teams will compete.

“We started 0-5 and kind of started kicking ourselves,” Michener said. “We want to play at Cabrini (in the semifinals) under the lights so we got to get the wins and it starts with the second cycle of the Inter-Ac.”

He said earning the first Inter-Ac win is a major confidence booster.

“It’s a big win, especially when you win by a couple of goals, 4-5, so you start rolling after that,” he said. “The guys are excited to keep going.”

George Glomb not only had two assists but was 16 of 23 on faceoffs, while Russell Fitzgerald was 2 for 2. Chet Kempinski added one assist and Noah Dacanay made 12 saves.

An overtime thriller for the Fords

Prior to facing Malvern Prep, Haverford School earned a 10-9 overtime win at Episcopal Academy. Wills Burt scored the game-winner on an assist by Teddy Malone.

Chuck Cacciutti made seven saves while Ben McCarthy had 15 ground balls and won 15 of 19 faceoffs.

Being on the other end of that 10-9 OT loss to Haverford was tough for Episcopal Academy, but the Churchmen showed that they can compete with the top teams in the Inter-Ac.

The rematch is May 13 at Haverford School.

Episcopal Academy then bounced back with a 13-4 win over Germantown Academy. 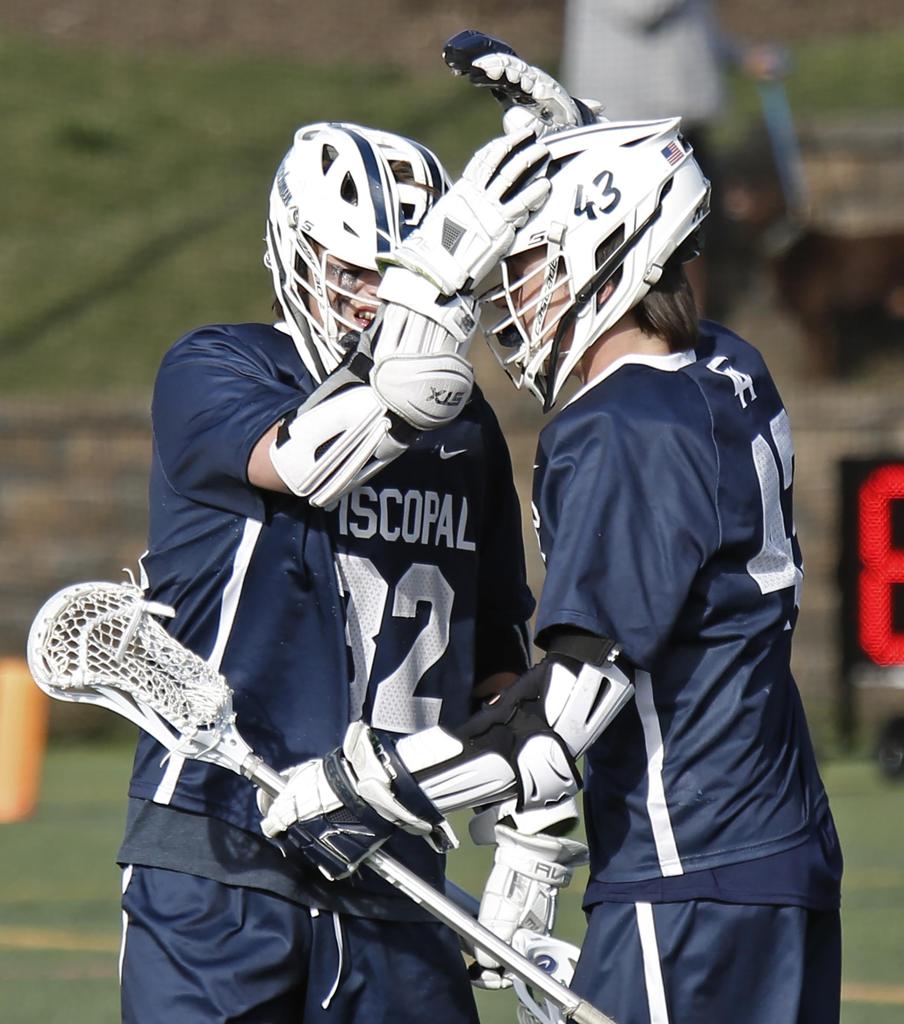 EA will have a rematch vs. the Haverford School on May 13 - PSD Photo by Lou Rabito

Routine win for the Friars

Before its 13-12 win over Haverford School, Malvern Prep earned a 17-2 win over Springside Chestnut Hill Academy in which 10 different players scored. Ennis Udo had four goals and two assists and Joe Sheridan added a hat trick. Multi-goal scorers were AJ Nikolic (2 G, 2 A), and Liam Timmins (2 G, 1 A).

Donnelly with another gem in goal

Germantown Academy senior goalie Brendan Donnelly continues to have a big year. In a 7-4 win over Penn Charter, the Drexel commit made 18 saves.

Jack Luviano, a Franklin & Marshall commit, led the way for the winning Patriots with four goals. Josh Lee added two goals and Josh Gibbs had a goal and one assist.

Walker Schwartz was all over the field with one assist and 14 ground balls.

Luviano had two goals and Joey Delello and Schwartz had a goal apiece in a 13-4 loss to Episcopal Academy. Shacklett won 12 of 20 faceoffs and Donnelly added 10 saves. 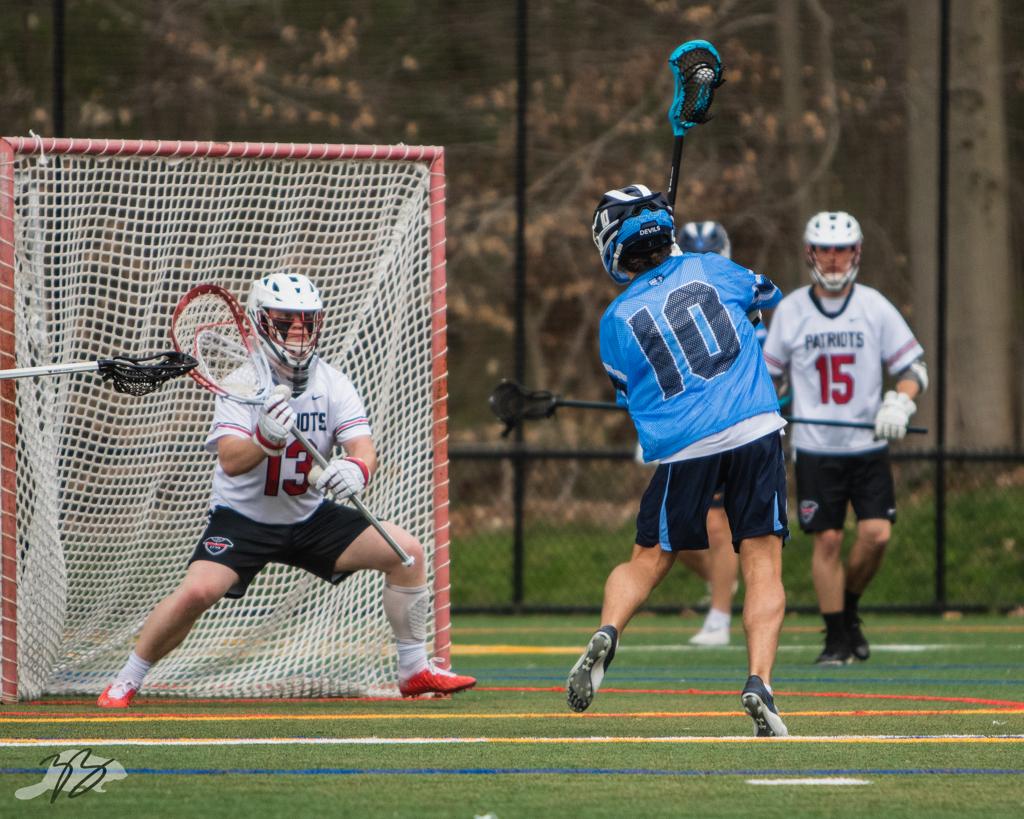 Another key non-league win for SCH

For the second straight Saturday night, Springside Chestnut Hill Academy earned a win over a non-league team when the Blue Devils won, 10-4 at Upper Dublin.

Alec Tulio and Bryce Coletta each had an assist.

Ross Prince was an unworldly 15 of 15 on faceoffs, while also contributing 12 ground balls and one assist and Hayes Schreiner made 10 saves.