Agnes Irwin senior midfielder Marissa White has made an impressive comeback from a torn ACL that she suffered in January of her junior year.

One could call it an All-American comeback.

Not only has White returned strong this season to be a major contributor to one of the Inter-Ac contenders, but she has added among the highest of honors that a high school senior can earn.

It was recently announced that White was selected to play in the 17th annual Under Armour All-American Lacrosse Game on July 30 at Johns Hopkins University in Baltimore.

The girls’ game will be at 5:30 followed by the boys contest at 8, with both contests airing on ESPNU.

Even more impressive is that the All-Star game announces four different waves of 11 players selected to the game. So far only 22 players have been picked for both the girls’ and boys’ game, and White is one of them.

A testament to the area’s lacrosse talent is that two girls, including White, and one boy have already been named to the Under Armour game. Archbishop Carroll’s Kiley Mottice, a North Carolina commit and Episcopal Academy’s Andrew McMeekin, a Princeton commit, have also been chosen. (More on McMeekin in the upcoming Inter-Ac boys’ lacrosse column).

All that arduous work put into rehabilitating her knee has paid off for White, who will also join Mottice at national power the University of North Carolina.

“I am super excited about this,” White said.

“Yes, just because I came back from my knee injury,” she said. “It wasn’t my expectation as much because I missed my whole junior year and knew it was probably going to be difficult to make.”

Difficult, but as it turns out not impossible.

This will be a nice sendoff to White prior to attending college.

Her injury occurred in an indoor lacrosse game in January of 2021. She was back playing fall club lacrosse in November of that year.

One good thing was that when she suffered the injury, she already had made her commitment to North Carolina, having done so in September of her junior year.

There was no worrying about selecting a college, only about rehabbing her knee.

“It wasn’t fun, but I worked hard all summer,” she said. 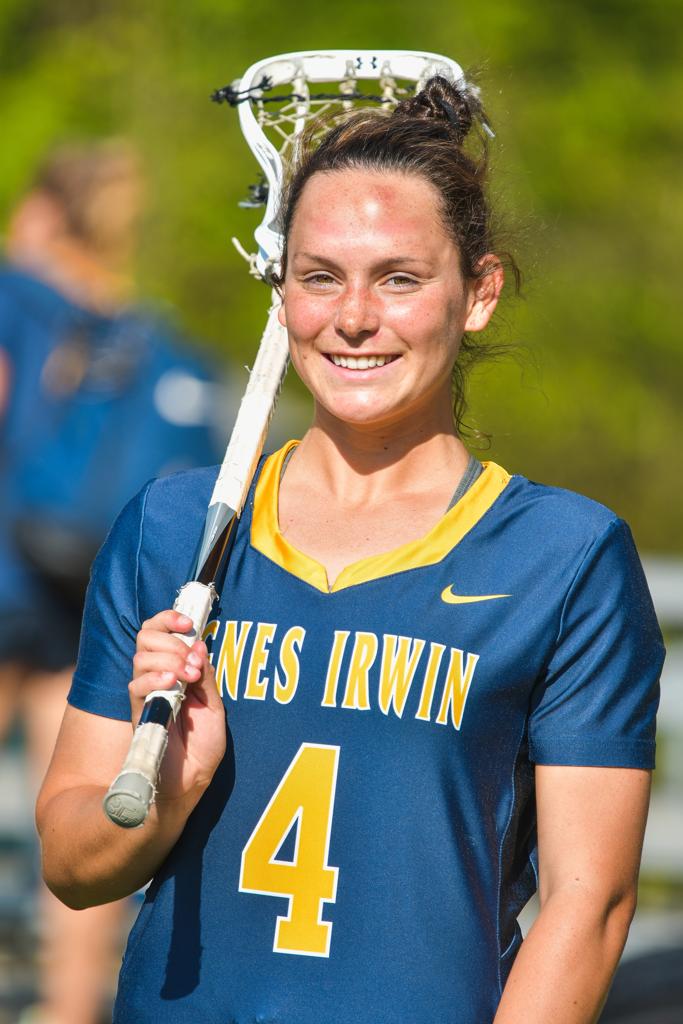 Any student-athlete has to show considerable toughness and dedication to return from such an injury.

White has always had plenty of both characteristics.

She credits her two older brothers for helping in the toughness department.

Her father Glenn was a lacrosse player at Villanova and introduced her to the sport.

“I started by having passes with him in the backyard,” she said.

Her development continued in the same backyard with her two older brothers Zach, who played lacrosse at Fairfield and Scott, a current senior lacrosse player at Ohio State.

Those sessions weren’t for the light of heart.

“My brothers would throw me in the cage with a helmet on and shoot on me and that is where I got my competitiveness on the field,” she said.

In other words, her big brothers didn’t take it easy on her.

“No, not at all,” she recalls laughing.

Agnes Irwin Senior Marissa White lauds her team for shaping her into the player she is today. (video/ Ryan Nix for PSD)

Agnes Irwin in Game vs. Germantown Academy on 5/5.(video by Ryan Nix for PSD)

Her mother Tracy didn’t play the sport, but has become an ardent follower, with three children excelling at lacrosse. This is a true lacrosse family that has logged thousands of miles watching and competing.

As for choosing North Carolina, White says she always had an affinity for the school, growing up and attending camps there beginning in middle school.

“They have such great coaches and have a reputation for developing players and I thought academically and athletically North Carolina would push me the most to reach my potential,” she said.

Since 2013 North Carolina has reached the Final Four six times and won the national championship in 2013 and 2016. The Tar Heels have been to the NCAA Tournament 16 consecutive years (not counting 2020 when there was no tournament due to COVID).

One thing that is not surprising is that White isn’t just happy to be named to the team, but she wants to perform to her very best. This will be no simple exhibition for her. It might even resemble those backyard games with her brothers.

“I want to be competitive with the best girls in the class,” she said. “It will be fun to play against the best seniors.”

Two big wins for the Patriots

Germantown Academy won a game last week where the scoring was really spread out. Six players had a hat trick or better and three scored five or more goals in a 25-14 win over Baldwin.

The Patriots didn’t have much time to celebrate the win, having to visit a quality program, The Hun School, the next day. Germantown Academy earned a highly competitive 10-9 win in what was Senior Day at the Hun School.

“There was an emotional and psychological component to this game,” Germantown Academy coach Jay Foster said. “We had just played an Inter-Ac game 24 hours earlier and were missing six of our rostered players.”

One of the standouts in the win was junior defender Gina Melograno.

“Gina stepped up big-time for the team and played 50 minutes of solid, textbook, feet-first defense and freshman goalie Sadie Hess made another game-winning save that put us in a position to retain offensive possession at the end of the game,” Foster said.

In short this was a total team effort.

“Across the middle of the field, senior captain Heidi Cross and juniors Mia Raven and Sage Battisto each brought their versatile and unique skill sets with their ability to play the power game, clearing the ball in transition, gaining possession of the ground ball on draw control and generating our offense and scoring threat options,” Foster said.

Germantown Academy in game vs. Baldwin School. (photos by Geanine Jamison for PSD))

Germantown Academy in game vs. AIS. (photos by Ryan Nix)

“Sarah Marvin ably controlled possession of the ball at X with Heidi and Mia to seal the victory,” he said. “Maggie Borek’s growth the past two weeks has been commendable. She’s made a big effort to elevate her shot selection and finishing inside with either hand and it paid off in this game with three goals and two assists.”

“It’s a privilege to work with a team of such competitive student-athletes,” Foster said. “Every player has something to contribute. Collectively we win, but more importantly, we learn as a team.”

For a young team, these wins are important, especially since the competition in the Inter-Ac is so fierce. The Patriots then fell to Springside Chestnut Hill Academy, 13-6 and to Agnes Irwin, 18-6.

Goodwin and Gigi Ippoldo each had two goals against SCH and Wanner led the way with two goals and an assist against Agnes Irwin.

Inter-Ac standings (through Thursday, May 5)

This year there will be no girls’ playoff in the Inter-Ac League. The regular season will end on May 17 and then many of the teams will compete in the Pennsylvania Independent Schools Athletic Association (PAISAA) playoffs, which begin on May 20.

The Inter-Ac boys will hold a playoff with the top four teams qualifying.

Game of the Week

The other goals scorers were Lainey McGonagle, Maura Irish, Alexis Ventresca (who also had two assists) and Sydney Richter, who also had four draw controls and three ground balls.

Grace Holland made six saves and added one ground ball and one caused turnover.

In an earlier 18-4 win over Notre Dame, Piselli led the way with five goals, two draw controls and one caused turnover.

Tough one for Penn Charter

Trailing 8-1 at halftime, William Penn Charter made a valiant effort before falling to Episcopal Academy, 12-11 in the aforementioned game of the week.

Springside Chestnut Hill Academy led Germantown Academy 5-3 but turned it into overdrive in the second half during a 13-6 win. 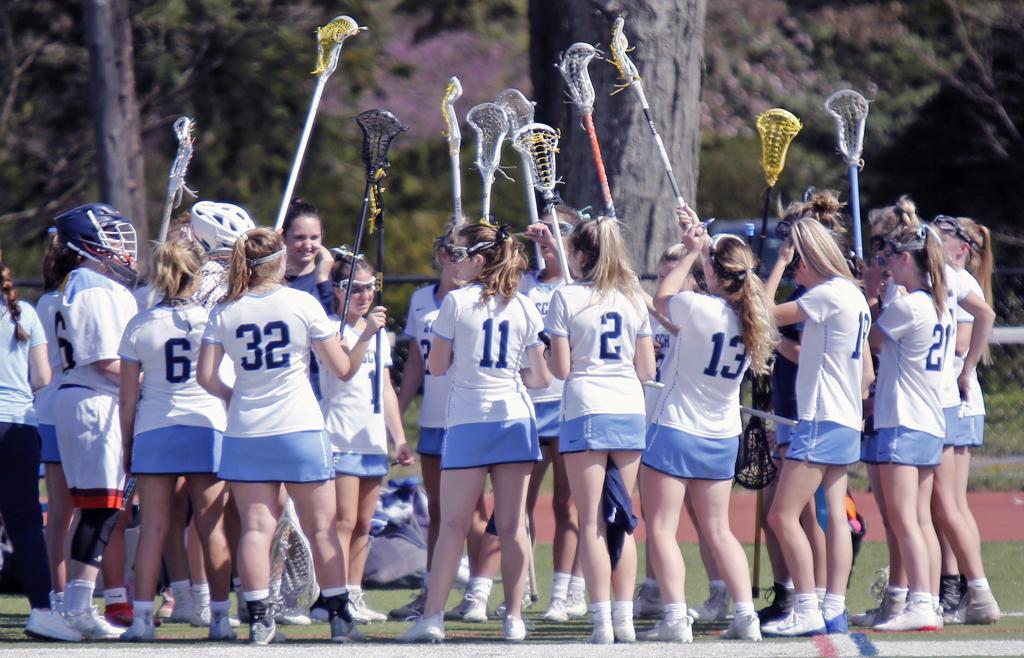 Eleven different players scored at least one goal in the win over Germantown Academy, led by White who had five goals and one draw control.

Onderdonk continues her impressive season for Academy of Notre Dame

Junior midfielder Katie Onderdonk continues to shine for Notre Dame. In a 15-8 loss to Agnes Irwin, Onderdonk had three goals and eight draw controls. Onderdonk is a Massachusetts commit. 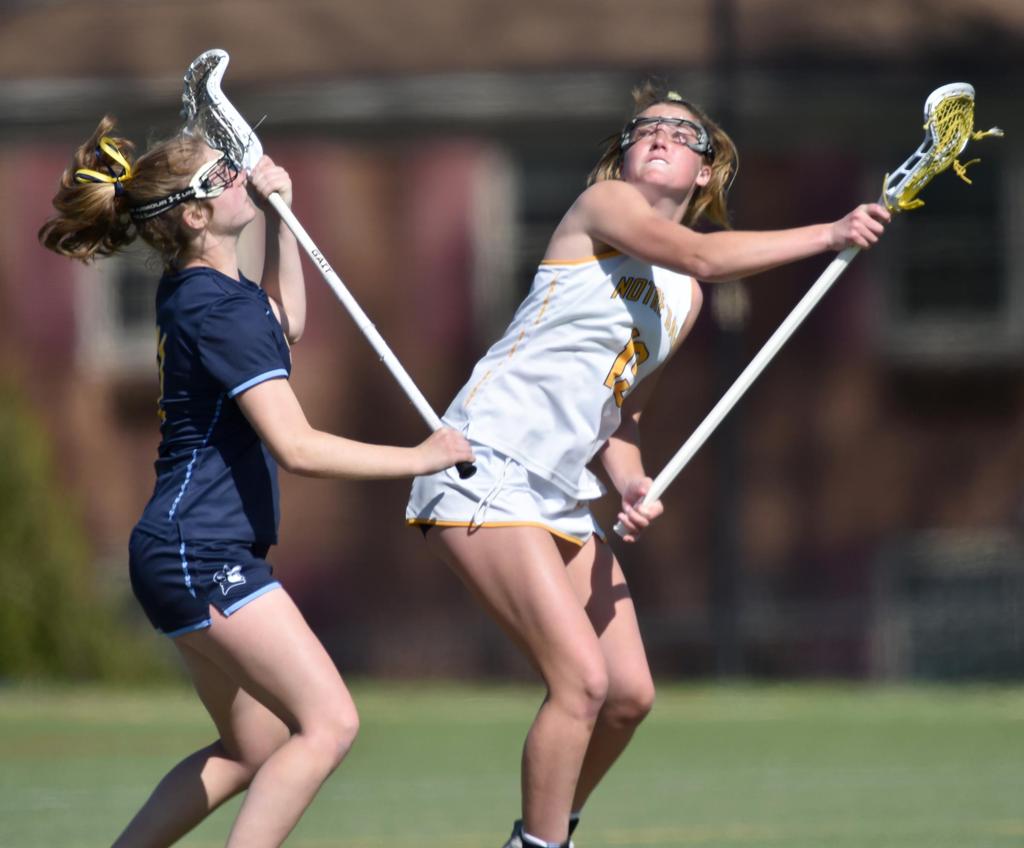 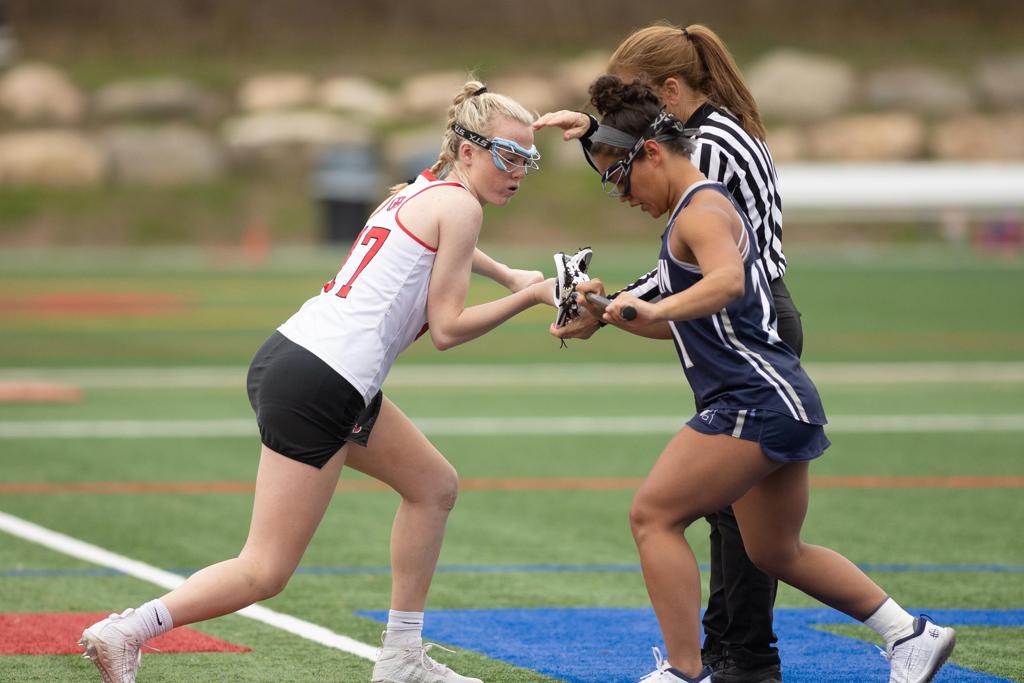