INTER-AC LACROSSE - For one of the few times in his lacrosse career, Episcopal Academy senior Andrew McMeekin was caught off-guard.

McMeekin has been selected to play in the in the 17th annual Under Armour All-American Lacrosse Game on July 30 at Johns Hopkins University in Baltimore.

The girls’ game will be at 5:30 followed by the boys contest at 8, with both matchups airing on ESPNU.

Even more impressive is that the All-Star game announces four different waves of 11 players selected to the game. So far only 22 players have been picked for both the girls’ and boys’ game, and McMeekin is one of them.

Besides McMeekin, two area girls have already been selected for the game, Marissa White of Agnes Irwin and Kiley Mottice of Archbishop Carroll.

“I definitely wasn’t expecting it because it is such a hard thing to accomplish,” McMeekin said. “I was definitely hoping for all the work I have put in that it would happen, but you can never be certain.”

Actually, now he is certain.

He was picked in the second wave of 11 players and he admits that he was paying attention to each announcement.

“I was looking out for them to come out and it was really nice to see that I was in the second wave,” he said.

McMeekin is an accomplished face-off man. As his selection shows, he is among the best in the country. He also plays offensive midfield and in man-up situations, but has made his true mark in face-offs.

Winning a face-off is true grunt work. It is a battle of wills and McMeekin has spent years refining his craft.

“It takes a lot of time and practice,” he said. “I practice with my friends all the time and once you put in the hours, you reap the benefits.”

He admits that it is an exhausting exercise.

“It definitely tires me when running off the field and you are usually out of breath,” he said. “You are full speed on the ground and it is such a physical battle, but you get used to it after a while.” 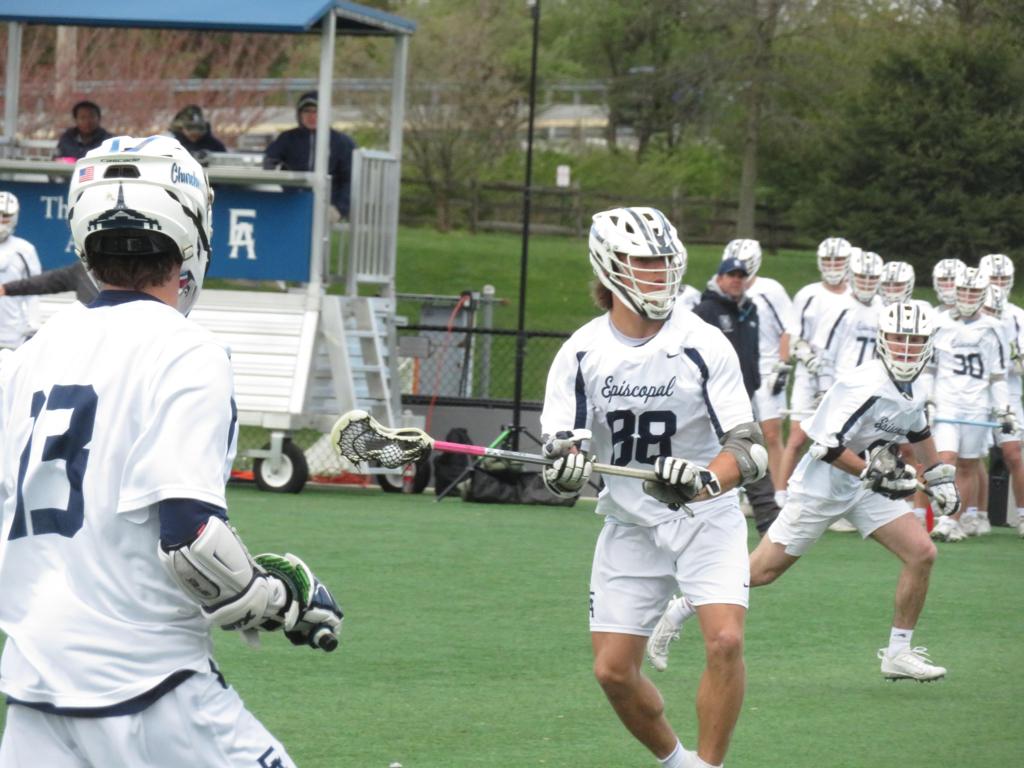 No matter how used to it one gets the longer the game, the tougher the task.

“It can be tough late in the fourth quarter of a high scoring game,” he said.

McMeekin will continue his lacrosse career and education at Princeton. He said he was recruited primarily as a face-off man but is willing to do anything to help his future Tigers teammates.

“Offense, defense, I would be open to anything,” he said. “I am pretty sure they are looking for me on the face-off for now.”

“It is quite an honor,” Bates said. “Andrew is known to be one of the very best at his position and to be recognized and play in a game of this magnitude, it’s exciting for him and we are all proud of him.”

McMeekin is sidelined with a recent injury, and his return to the field isn’t yet known.

“I am hoping to get back as quick as possible,” he said. “When I went to the doctors there was not a firm timetable, but I feel great. Doctors’ orders are to lay low for a little bit.”

McMeekin has enjoyed playing the past two seasons without the pressure of a college decision hanging over his head. He made a commitment to Princeton in September of his junior year.

“I like the balance of academics and lacrosse there,” he said. “When I made the decision, it was a big weight off my shoulders.”

Those are some big shoulders on the 6-foot-1, 210-pound Episcopal Academy senior.

While winning face-offs is the No. 1 goal for McMeekin, a bonus is when he wins it and then goes down to score, something he has done several times in his career.

“It’s one of my favorite things to do,” he said.

That is only exceeded by his will to win.

Even in an All-Star game, he will be battling just as hard on those face-offs. This is more than just an exhibition to McKeekin. It’s a way to showcase his skills against the best in the country.

Inter-Ac standings (through Sunday May 8)

Episcopal Academy became the first Inter-Ac team to defeat Malvern Prep in a 6-5 win on May 3. Both teams played inspired lacrosse, each without one of the top players, with McMeekin out for Episcopal and junior AJ Nickolic sidelined for Malvern Prep.

“It’s nice to get a quality win over such a solid program, which is so talented and very well coached,” Episcopal Academy coach Chris Bates said. “It was certainly a defensive struggle.”

That’s for sure. The game was 2-1 Episcopal at halftime after a scoreless second quarter.

“I thought our defense was very much bend but don’t break,” Bates said. “Nash (Womack) was really good in goal.”

With McMeekin sidelined, Will Hohn went 10 for 15 on face-offs

“Will did a really nice job on the face-offs,” Bates said.

The offense was spearheaded by Vermont commit Tristan Whitaker, who had five goals. Lucas Slate scored the other goal. TJ Lamb contributed three assists while Paul Buckley and Kearney each had an assist.

Another convincing win for the Fords

The goalie due of Chuck Cacciutti and Trey Campbell combined for 11 saves. Wills Burt had two goals and one assist and Connor Nolen totaled two goals.

Other goal scorers were Teddy Malone and Sam Gerber.

Haverford School will conclude its Inter-Ac schedule with a home showdown against Episcopal Academy on Friday (May 13). Both teams are 6-2, one game behind Malvern Prep in the league standings.

Haverford in game vs. Penn Charter on 5/3. (Photos by Mike Nance for PSD)

After suffering the first loss of the season, 6-5 to Episcopal Academy, Malvern Prep rebounded with a 10-6 win over Delaware’s Salesianum.

In the loss to Episcopal Academy, Joe Doherty made 15 saves, but the Friars were just 4 of 14 on face-offs.

Freshman Mike Ortlieb scored a hat trick. Jack Irish had a goal and an assist and Richmond commit Joe Sheridan scored the other goal.

The win over Salesianum marked the return of standout junior AJ Nikolic, who missed the previous game with a shoulder injury.

Ross Prince continued his strong face-off work, winning 18 of 21 in addition to having 16 ground balls and one goal. Drew Bown had a goal and an assist and Neil Hutchinson added one assist. Hayes Schreiner was strong in goal with 15 saves. 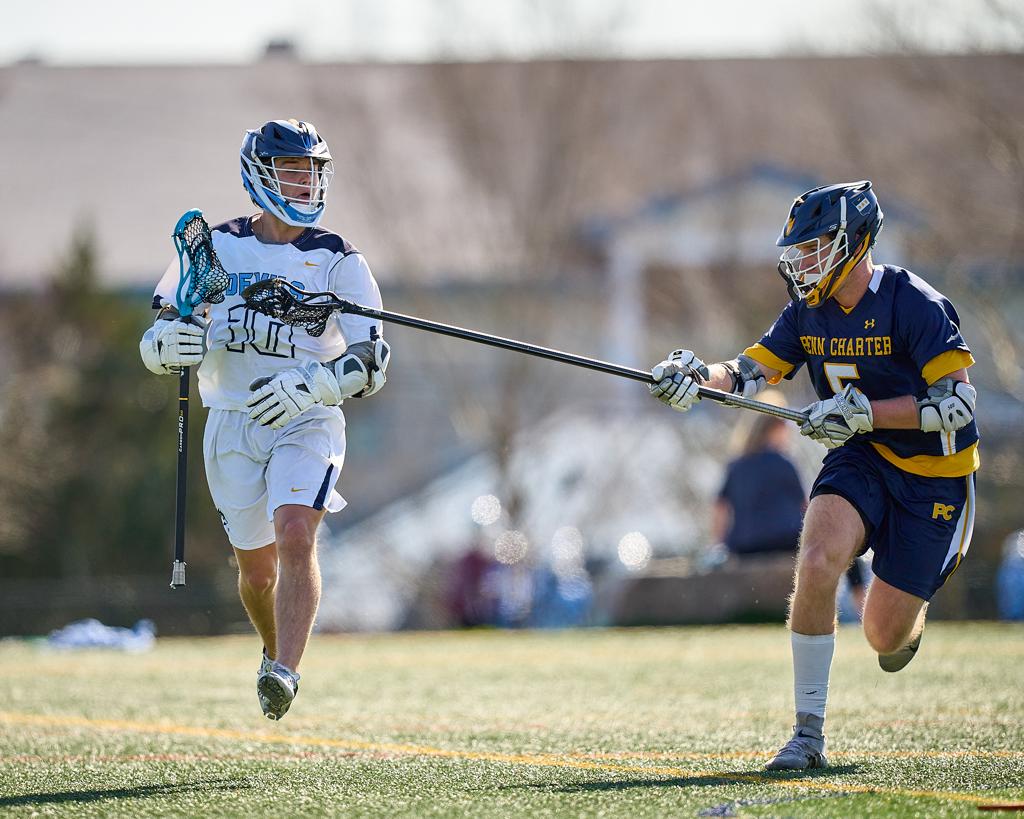 GA’s Donnelly a standout in goal

Goalie Brendan Donnelly continues to be strong for Germantown Academy whether in victory or defeat. In an 11-4 loss to Malvern Prep, he made 18 saves. Joey Delello and Rocco Ippoldo each had a goal and an assist, while Jack Luviano and Ryan Barrett each scored once and Jack Liss had two assists.

After suffering Inter-Ac losses to Haverford School and Episcopal Academy, Penn Charter bounced back with a 14-7 nonleague win over Moorestown Friends.

Owen Black had six goals and one assist, while Colin Michener, the Villanova commit, added four goals and five assists. Nick Walter contributed one goal and two assists and Chet Kempinski had one goal and one assist. Other goals scores were Petey Malitas and James Joel, while Pat McDonough and Casey Felter each had one assist. Noah Dacanay made eight saves and Harrison Quinn had one save. Most impressive was George Glomb, who was 16 of 22 on face-offs. 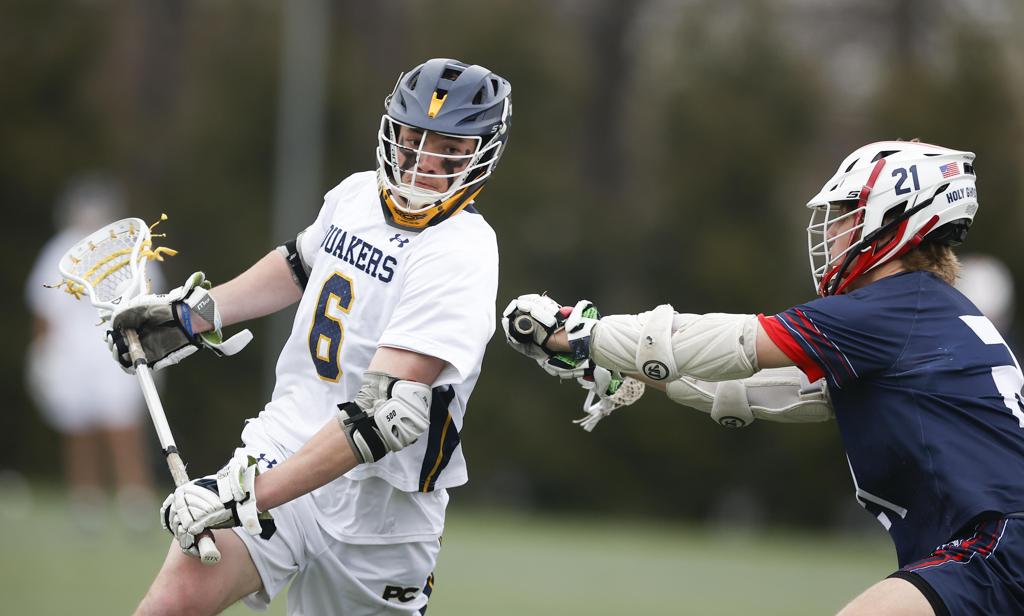 In a 15-9 loss to Episcopal Academy, Gavin Michener had four goals, Colin Michener added three goals and two assists and Kempinski and Malitas each had a goal. Decanay made nine saves.

During the 14-6 loss to Haverford, Glomb was 11 of 22 on facceoffs and Decanay made nine saves. Malitas had three goals, Walter delivered two goals and two assists and Colin Michener had one goal and one assist.